Priverno is the Italianized name of Privernum, a town conquered by the Romans in 329 BC and abandoned in the VIIIth century because of Saracen raids. Its inhabitants founded a new town called Piperno, on a low hill separating the valley of the Amaseno River from the coastal plain. In 1928 the name of the town was changed. This occurred to other medieval towns which were renamed with more or less appropriate references to their Roman origin (Corneto became Tarquinia, Toscanella Tuscania, Lavinia Lanuvio, etc.).

Priverno does not have a view over the coastal plain, but towards the valley where the ancient town was located. It was not the only town founded by its inhabitants when they had to find a safer location in which to settle. Some of them went as far as Sonnino. 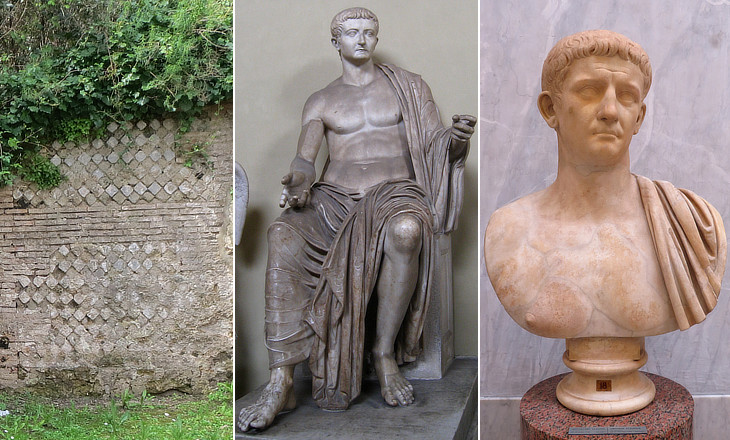 (left) Wall in "opus mixtum" of a Roman villa at Fossanova, near Priverno; (centre/right) Musei Vaticani: statue of Emperor Tiberius and bust of Emperor Claudius which were found in 1796 at Priverno

Summis Amasenus abundans spumabat ripis; tantus se nubibus imber ruperat (Amasenus overflowing foamed over its highest banks; such a torrent of rain had burst from the clouds) Virgil - Aeneid - Book XI
Privernum was a prosperous town thanks to a dam on the River Amaseno built by the Romans to prevent floods and irrigate the fields. Ruins of the Ist and IInd century AD have been found at the foot of the hill where the modern town stands and in the surrounding countryside. 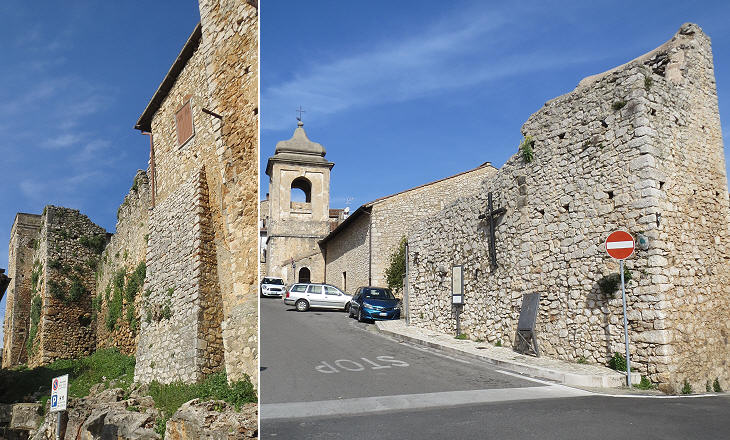 (left) Walls near Porta Napoli; (right) walls near S. Benedetto, the first cathedral of the town

The walls were built in the XIIth century and they were never upgraded to the requirements of cannon warfare, an indication that the town had lost importance by the late XVth century when new designs of walls and fortifications were introduced. 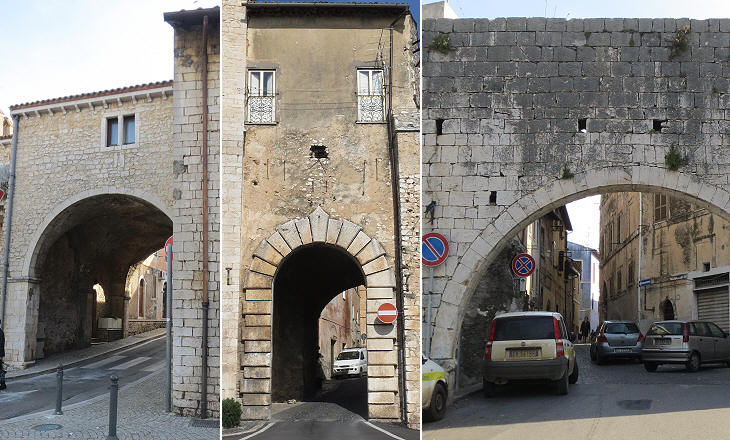 At the beginning of the XXth century municipal authorities decided to facilitate the access to the historical part of the town. Some gates were pulled down or enlarged. Porta Napoli was not touched because it was wide enough to allow cars through it. Porta S. Marco was in the past the entrance from Rome. 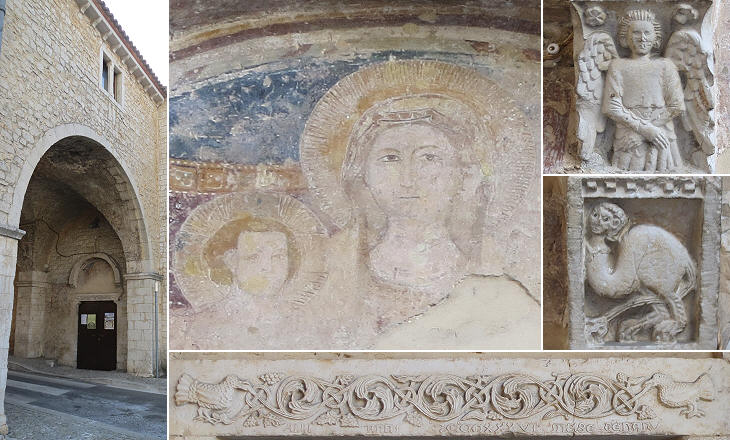 Portal of S. Antonio and details of its decoration with a lintel dated 1336

Priverno was not subject to a feudal lord, but it was a comune, a free town which flourished when the Popes were absent from Rome. Most of its monuments are dated XIVth century although for many of them there is not a precise record about their foundation. 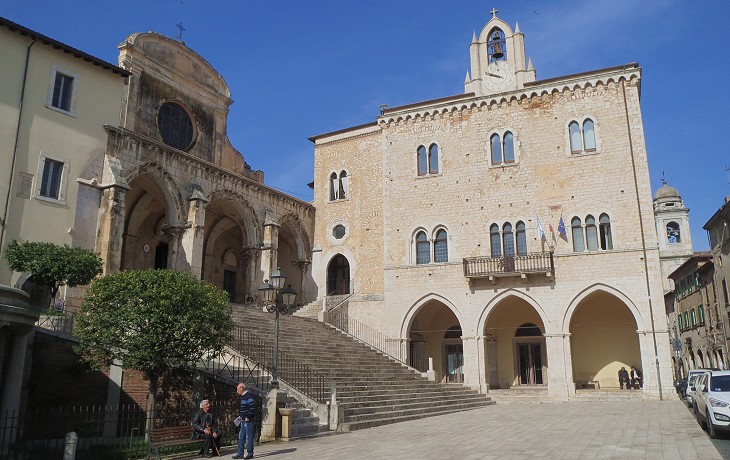 The main square with the Town Hall next to the Cathedral reminds of Tuscany or Umbria, where many free towns developed. Palazzo Comunale however was smaller than it is today because the upper storey, the balcony and the clock were added in the XXth century. 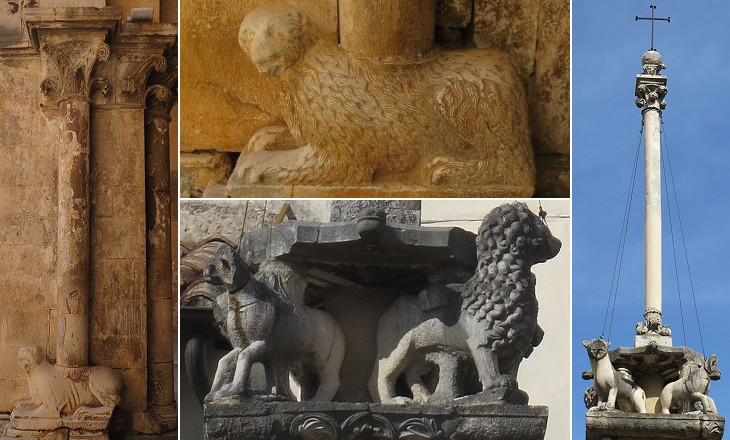 Medieval lions supporting columns at the Cathedral (left) and at S. Giovanni Evangelista (right), where they were removed to build a small monument

In many medieval churches statues of lions were placed at the sides of the entrance (see those at Verona and Ancona); they had a specific meaning as at Civita Castellana, but those at Priverno were most likely found in the ancient Roman town. In some instances statues of a bull or a horse were used instead of a lion. 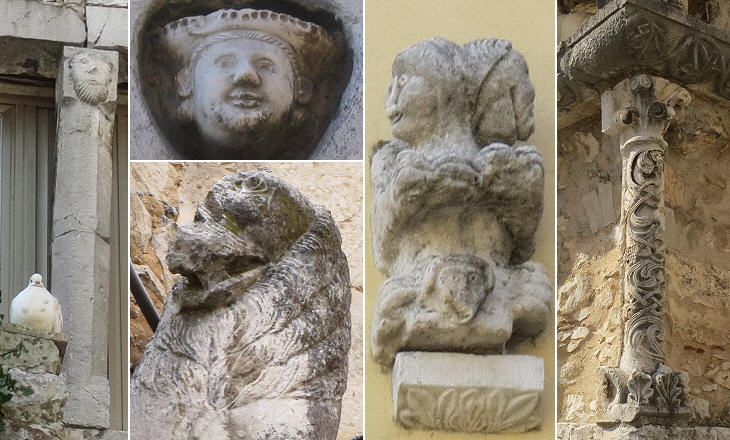 A road to the right leads (6 miles) to Piperno, the ancient Privernum, a most picturesque place, with many fragments of Gothic domestic architecture, and a charming piazza adorned with old orange-trees.
Augustus J. C. Hare - Days Near Rome - 1875. Augustus Hare (1834-1903), an English writer, is best known for his historical accounts and travel books which included Walks in Rome and Days near Rome.
The image used as background for this page shows a relief on the portal of the Cathedral: one of many puzzling medieval works of art one can find wandering about in the streets of Priverno. 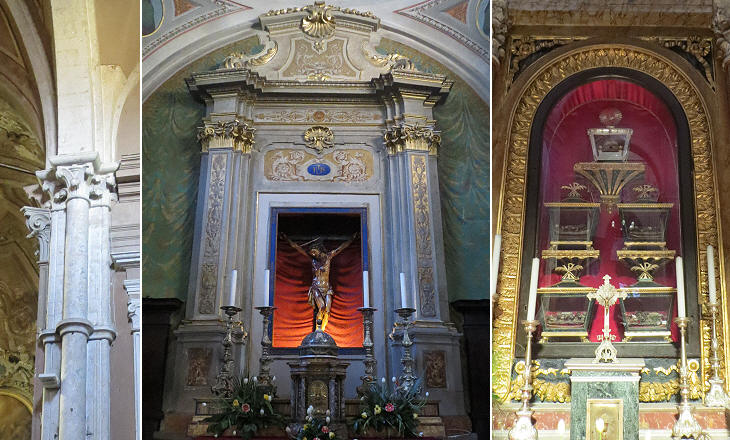 Cathedral - interior: (left) a small section of the original structure in the apse; (centre) XVIIIth century altar; (right) altar with relics of St. Thomas Aquinas who passed away at Fossanova in 1274

The diocese of Priverno was founded in the XIth century, but in 1217 Pope Honorius III united it to those of Terracina and Sezze. The union was aeque principaliter (on the same footage). In the XVIIIth century the interior of the Cathedral of Priverno was redesigned and it lost its medieval appearance which was similar to that of the Abbatial Church of Fossanova. In the XVIth century the economy of Priverno declined and only a few buildings show some signs of wealth.
Hare noted in his book: It has been celebrated in all ages for its brigands. A disrepute it shared with Sonnino. 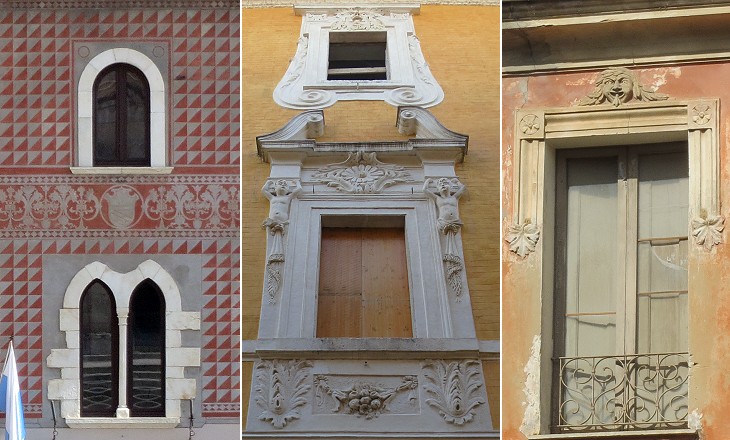 Priverno does not lack steps