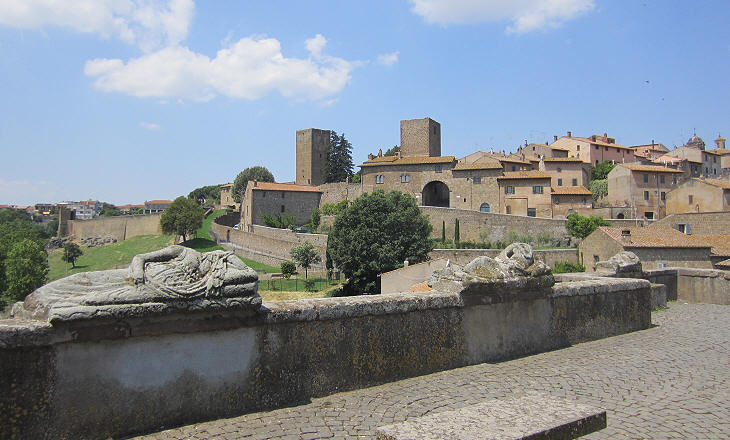 View of the "il Poggio" (hill), the western quarter of Tuscania: in the foreground covers of Etruscan sarcophagi

Toscanella is visible from a great distance, on a height above the valley of the Marta. Toscanella was the Etruscan Tuscania, mentioned by Pliny as amongst the municipal communities of Etruria, but otherwise unknown to history.
Augustus J. C. Hare - Days near Rome - 1875
Tuscania was an Etruscan town of some importance and many tombs have been found in its environs. The rich were buried in sarcophagi covered by a statue where the dead were portrayed as if they were attending a banquet (which was part of the funerary ceremonies - see a page on this type of sarcophagi). 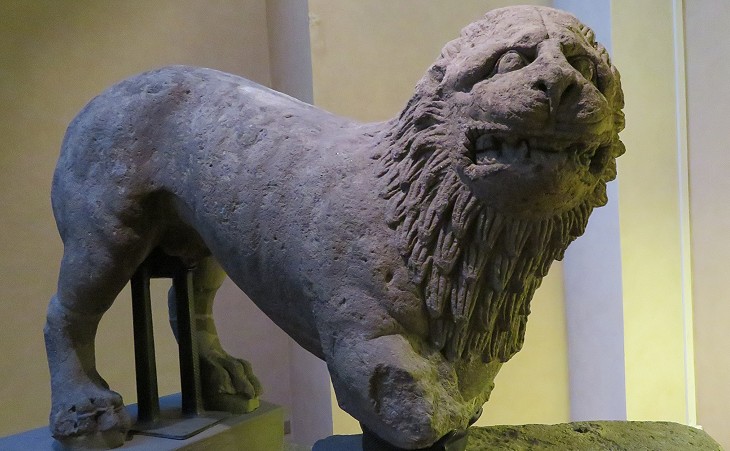 Archaeological Museum of Florence: Etruscan funerary statue of a warden lion found near Tuscania (IVth century BC - see a similar one from Blera)

After the churches, the chief attraction at Toscanella is the Etruscan museum and garden of the brothers Carlo and Secondiano Campanari, to whom the excavations of Tuscania are due, and who have largely contributed by the sale of their antiquities to all the important Etruscan collections of Europe. Hare
This lion was unearthed towards the end of the XIXth century and it was sold as if it had been found at Vulci near Canino. Although its origin was soon located near Tuscania, the exact site of the tomb was identified only in 2017. 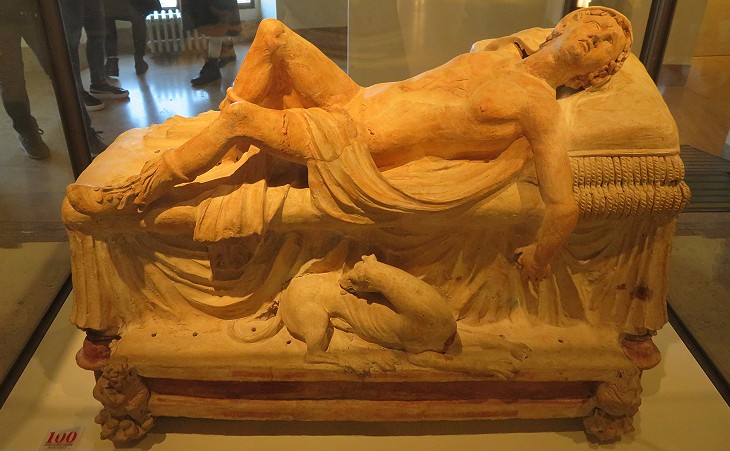 Musei Vaticani - Museo Gregoriano Etrusco: terracotta funerary monument depicting the death of Adonis which was found by the Campanari near Tuscania in 1834 (IIIrd century BC)

The very large number of similar teracotta cinerary urns and stone sarcophagi which were found near Tuscania has led archaeologists to believe that making them was an element of the local economy. 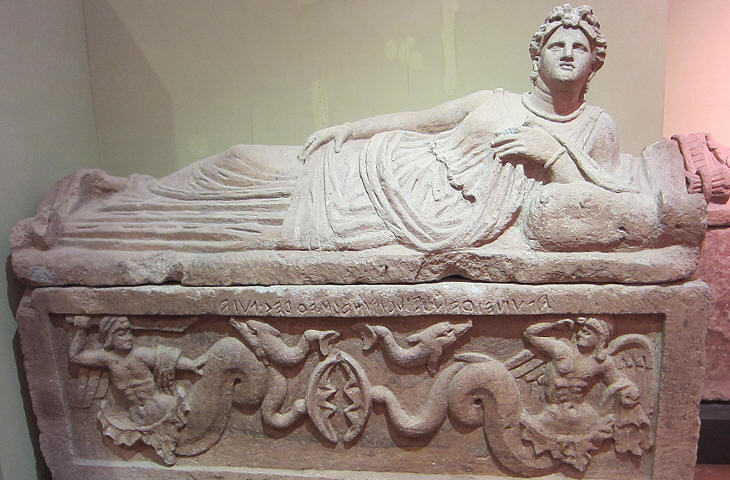 Only in 1922 sales of exhibits of the Campanari collection were forbidden. In 1941 the collection was moved to the Archaeological Museum of the town, which houses also exhibits which were found in the XXth century.
The Roman conquest of Tuscania in ca 285 BC did not cause a decline of the town; recently discovered tombs of two Etruscan families housed many sarcophagi of the period following the Roman conquest; they show the dead in the traditional Etruscan posture, but are decorated with scenes which show the influence of Hellenistic patterns. 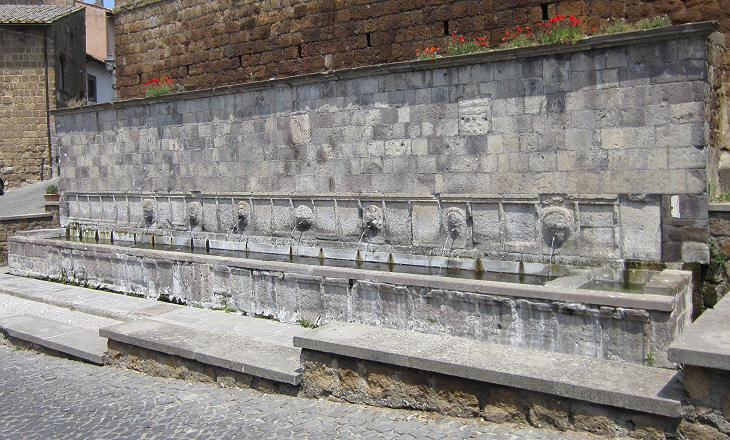 There are scarcely any traces of the Etruscan city, and only small vestiges of reticulated walling to mark the Roman settlement which followed it. Hare
This fountain was built in 1309 on a previous one of the Etruscan-Roman period by using many of the original stones; its location together with those of ruins of temples and baths helps in assessing the size of the ancient town. 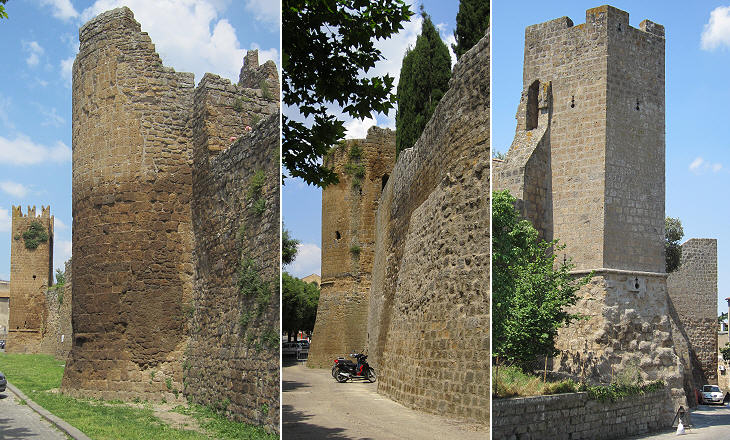 Towers of the medieval walls

Italy is also known as il Paese delle Cento Città (Land of the Hundred Cities) with reference to the high number of Italian towns having a historical and artistic interest. This is particularly true in central and northern Italy where in the XIth century the lack of a centralized power favoured the growth of Comuni, city-states ruled by locally elected magistrates.
Although formally belonging to the Church, Toscanella (this name was used until 1911) developed forms of municipal rule and the town was fortified with walls and towers. 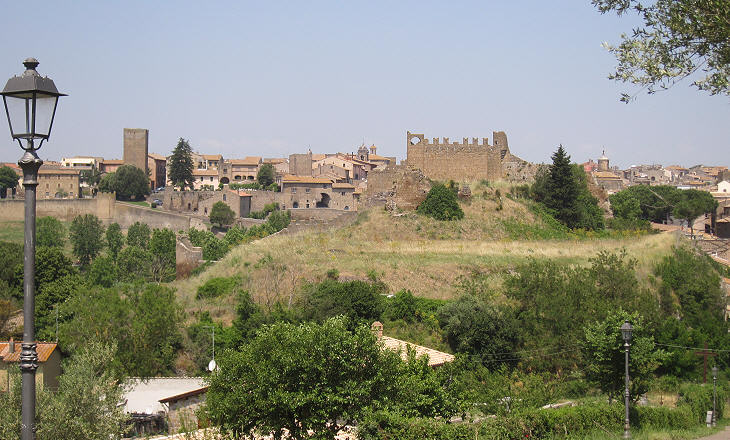 View of Tuscania from S. Pietro

In northern Latium the independence of the local Comuni came to an end in the XIVth century when Cardinal Gil Alvarez d'Albornoz subdued them and restored the authority of the pope (Toscanella was conquered in 1354); the effects of the conquest, coupled with those of the Black Death, a bubonic plague which almost halved the population of Europe in 1348-1349, led to a reduction in the town's size. Civita (City), the ancient acropolis where S. Pietro, the cathedral, was located was excluded from the wall enclosure, which was redesigned with the construction of an imposing bastion. 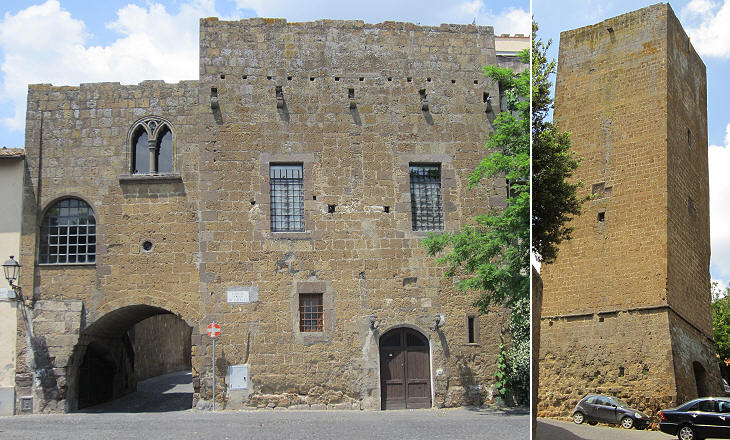 Palace and tower of the Lavello family

In the chaotic situation of the Papal State caused by the Great Schism, in 1414 Angelo di Lavello il Tartaglia (the Stammerer), a leader of mercenary troops, was given authority over Toscanella by Antipope John XXIII; he fortified his own residence by building a very tall tower; in 1421 however his short rule came to an end and he was beheaded by order of Pope Martin V.
Papal authority in Toscanella continued to be shaky until 1434 when Cardinal Giovanni Vitelleschi, who had had his military training with il Tartaglia, conquered the town. The Vitelleschi became a prominent family in the region around Viterbo (see their palace at Corneto/Tarquinia, not far from Toscanella). 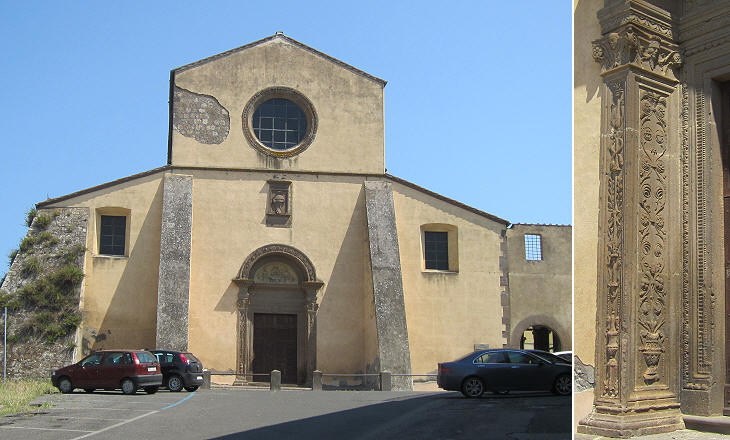 On Pentecost Day 1495 the troops of King Charles VIII of France sacked Toscanella while returning home after a vain attempt to conquer southern Italy; according to chronicles 800 inhabitants were killed, parts of the town were set on fire and S. Maria dell Riposo was razed to the ground; the church was rebuilt in the following years and in 1522 it was embellished with a fine Renaissance portal.
The structure of the building was strengthened with additional walls because the region has a high seismic risk; in February 1971 a strong earthquake struck the town and damaged many of its monuments. 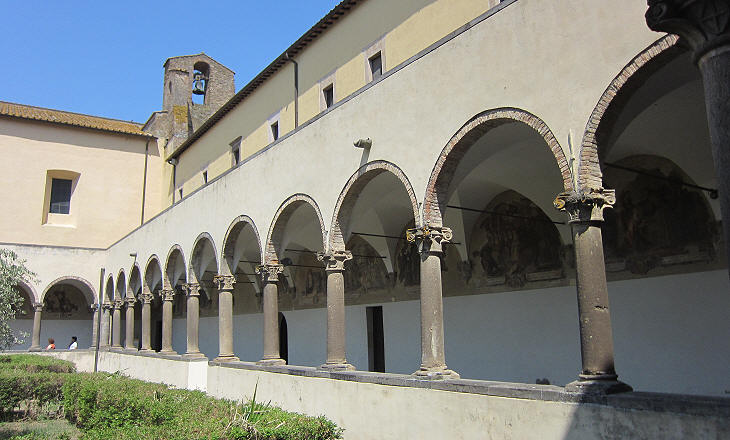 A large Franciscan monastery was built near the church and in the XVIIth century it was decorated with 48 frescoes depicting episodes of the life of St. Francis of Assisi; after the 1971 earthquake it was carefully restored and some of its premises now house the small, but well arranged archaeological museum. 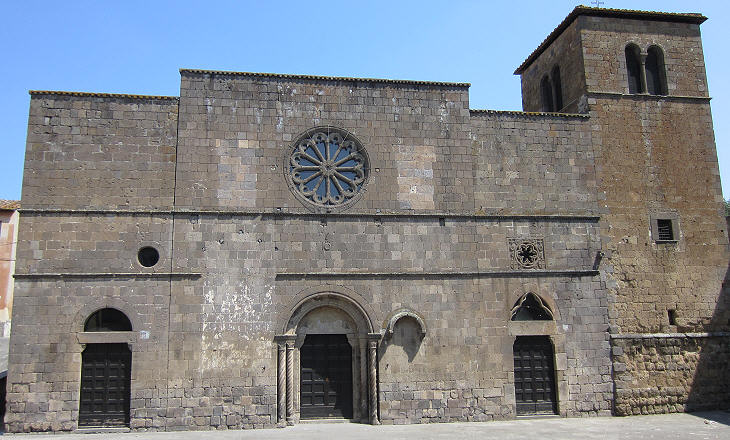 The horizontal design of the XIVth century façade of S. Maria della Rosa is more typical of the architecture of the Abruzzi region, and it is relatively unusual in Latium, exception made for Corneto/Tarquinia. It can be seen also in some towns of Umbria such as Todi. 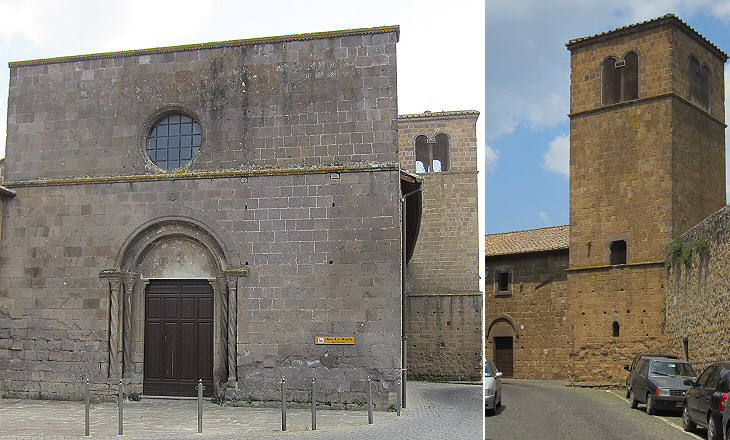 S. Silvestro was built at the same time as S. Maria della Rosa and its design is almost identical. Both churches were built making use of nenfro, a local variety of tufo, a volcanic rock having yellow and grey tones which was used by the Etruscans for their sarcophagi. 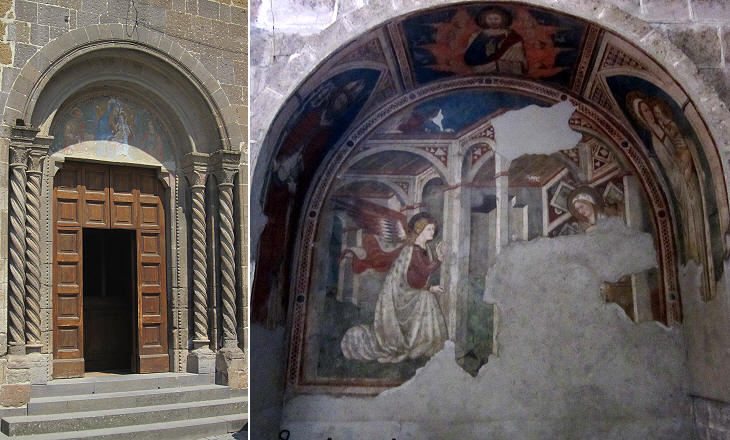 The restoration of some churches after the 1971 earthquake has unearthed old frescoes such as this nicely decorated niche in S. Marco, probably the work of a painter from Siena. 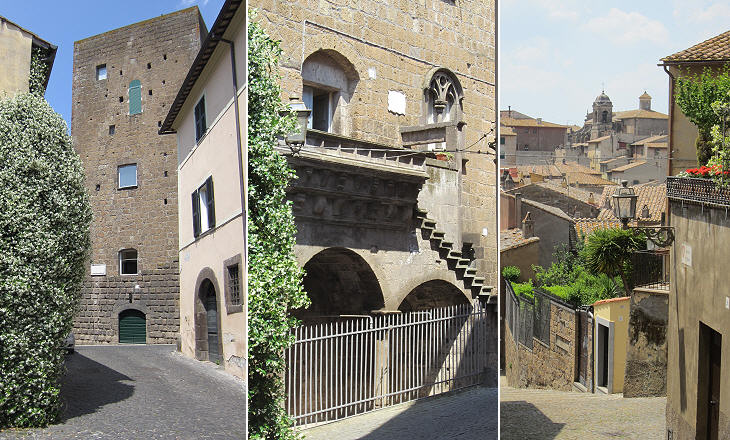 While most buildings date from after the 1495 sack of the town, the town retains many medieval corners similar to those of Viterbo, including some profferli, decorated external staircases. 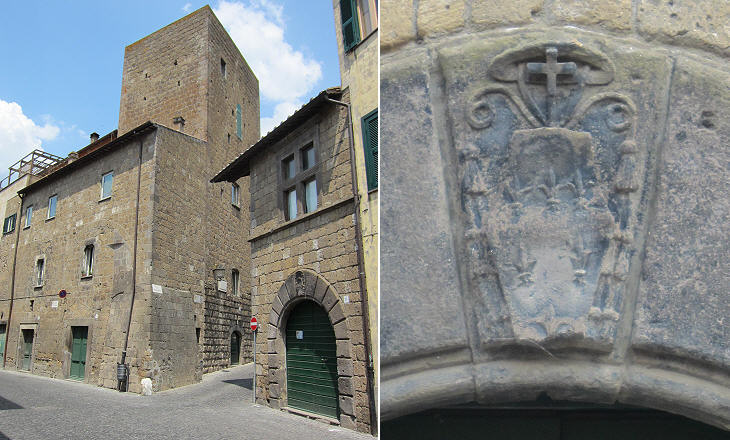 (left) Palazzetto Farnese near a medieval tower; (right) coat of arms of a Farnese cardinal

The town is located near Canino, the birthplace of Cardinal Alessandro Farnese seniore, who was for some time Papal Legate (governor) of Viterbo and its district, before becoming Pope Paul III; also his grandson Cardinal Ranuccio Farnese held that post in 1551. The Farnese established a small state (Duchy of Castro) immediately north of Toscanella. 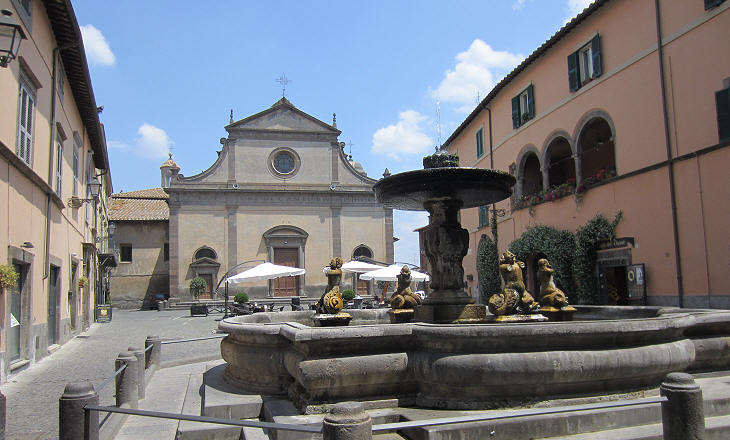 In 1572 Cardinal Gian Francesco Gambara moved the Cathedral of Toscanella from S. Pietro to S. Giacomo, a church inside the walls; he then rebuilt its façade, which is very similar to that of S. Lorenzo, the Cathedral of Viterbo, which also was rebuilt by Cardinal Gambara who is best known for his villa at Bagnaia. The fountain is attributed to Domenico Castelli, a Roman architect of the first half of the XVIIth century. 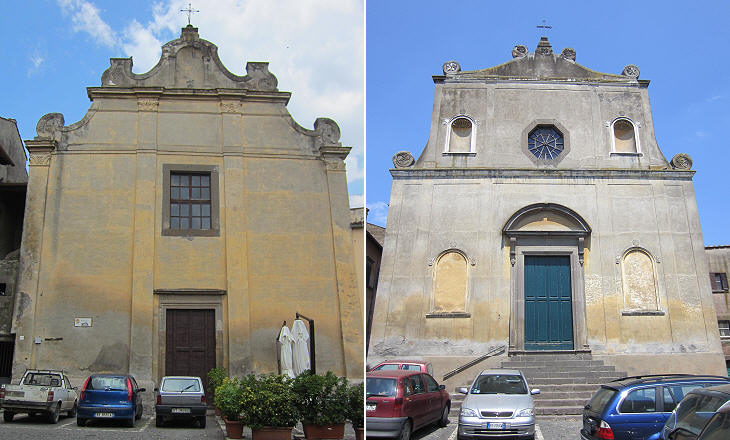 The economic policies followed by the popes in the XVIIth and XVIIIth century did not encourage the development of advanced farming practices, as those implemented by the Grand Dukes in Tuscany; the countryside of Toscanella became a pastureland and the town declined; the lack of decorations and statues in the façades of churches which were redesigned in that period is a clear indication of the state of the economy. 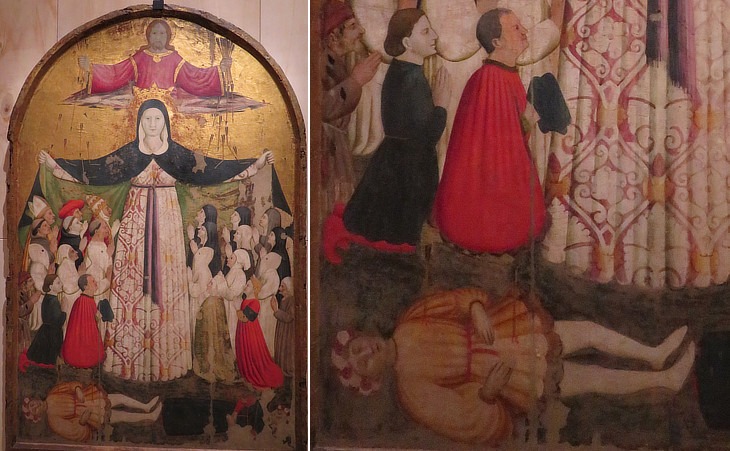 Museum of Tuscania: Temporary exhibition at Scuderie del Quirinale: Madonna della Misericordia (Virgin of Mercy) by Valentino Pica il Vecchio (ca 1447) from S. Agostino and detail showing a rich man who is punished for his sins

The depiction of the Virgin of Mercy showing a group of people sheltering for protection under her outspread cloak was very popular among charities, especially orphanages (see that at Spedale degli Innocenti in Florence) and brotherhoods (see a relief at Ancona). The painting at Tuscania is more complex, almost a sort of Last Judgment, because the cloak shelters a variety of people, including a pope, and Jesus throws arrows which kill those who are not protected. (left) Spedale della S. Croce with a chevron motif which is not typical of this part of Italy, but which can be often noticed in Norman buildings in Sicily; (right) S. Leonardo

From time to time politicians claim that regulations forbidding modifications of existing buildings are too strict, yet we owe to these regulations that the unusual portal of a former hospital or the façade of a deconsecrated church continue to embellish Italian towns. 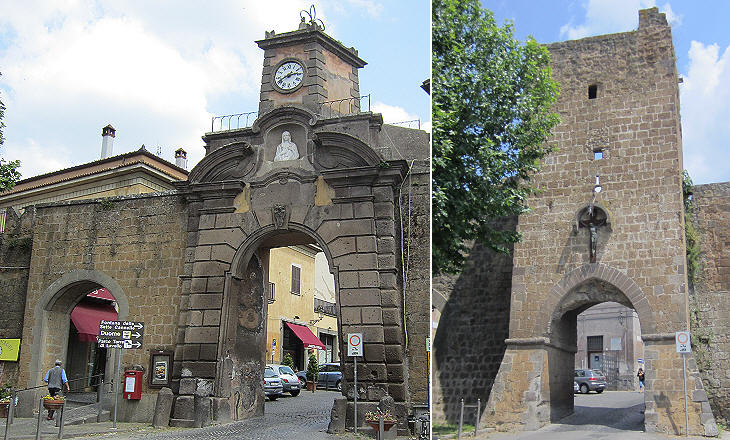 The town retains most of its medieval walls and gates; only Porta del Poggio, the main one, was redesigned in the XVIIIth century. 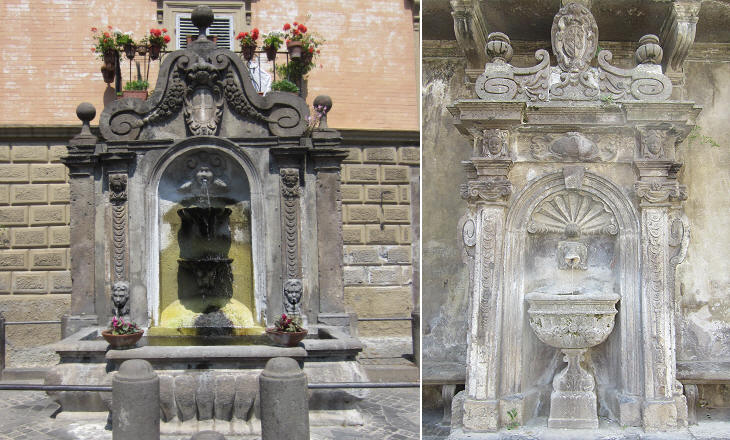 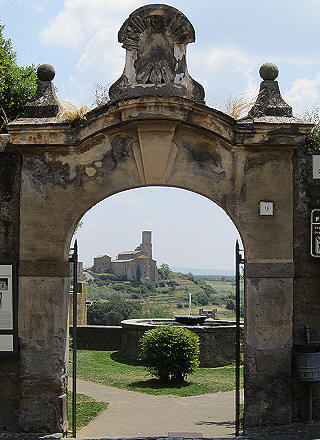