In 1587 a medal coined by Pope Sixtus V announced that "Law and Order" was re-established in the Papal State: it portrayed a pilgrim peacefully resting at the foot of a tree and the inscription Perfecta securitas.
This pope and his immediate successors implemented policies to stop assaults and robberies along the roads leading to Rome. The popes pursued their objective by a series of actions: a) a small army chased the brigands in their sanctuaries in the woods; b) rewards were paid to those who provided information on the hiding places of chief brigands; c) brigands who had committed only minor crimes were offered enrolment in the Catholic armies which fought in the Thirty Years' War (1618-1648). 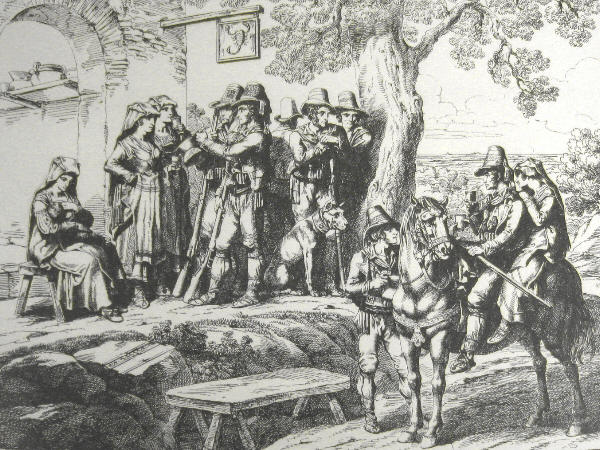 Villagers at Sonnino, a small town near the southern border of the Papal State

The objectives of these actions were not entirely met, yet J. W. Goethe who travelled to Rome in 1786 did not mention in his diary being worried about the brigands. He rather felt unsafe in the City itself. Just a few weeks after his arrival he wrote:
All I can say about the Italians is this: they are children of Nature, who, for all the pomp and circumstance of their religion and art, are not a while different from what they would be if they were still living in forests and caves. What strikes any foreigner are the murders which happen almost every day. In our quarter alone (the Strangers' Quarter) there have been four in three weeks. Today again the whole city is talking of one, but it only talks. An honest artist called Schwendimann, a Swiss medallist and the last pupil of Hedlinger, was assaulted exactly like Winckelmann. His assailant, with whom he had got into a scuffle, stabbed him twenty times, and when the guards arrived, the villain stabbed himself. This is not the fashion here. Usually, the murderer takes sanctuary in a church, and that is the end of that.
However Goethe did not write again on this subject, even when he described his many night wanderings through Rome. 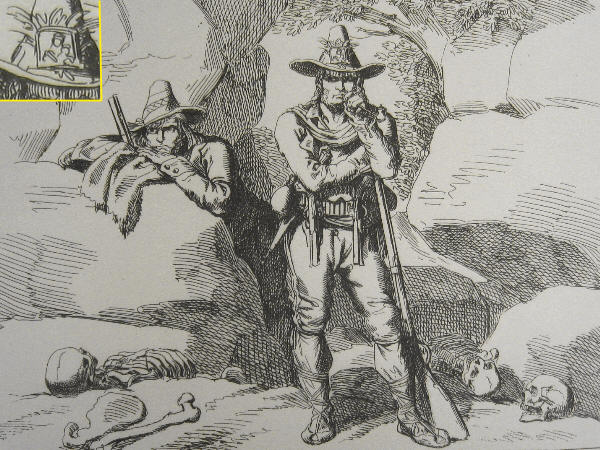 'Tis a wild life, fearful and full of change,
The mountain-robber's. On the watch he lies,
Levelling his carbine at the passenger;
And, when his work is done, he dares not sleep.

Samuel Rogers - Italy (from "Banditti" with an illustration by J.M. William Turner) - 1830
Assaults on travellers were endemic in some of the poorest areas of the Papal State but the situation was worsened by the policies followed by the French when they occupied the country at the end of the XVIIIth century. In particular the introduction of conscription led many young men to join bands of brigands who fought the French. They followed the example of the Army of the Holy Faith, a movement organized by Cardinal Fabrizio Ruffo in southern Italy to restore the monarchy in Naples. 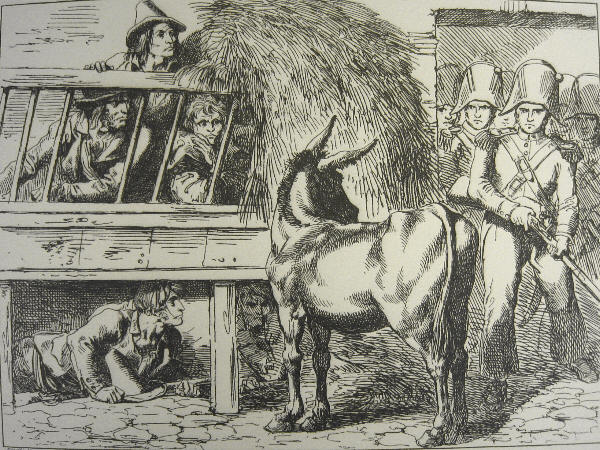 Pope Pius VII who returned to Rome in 1814 was unable to restore security in the Papal State. The brigands were given a pardon on the basis that they fought the French government and some of them were enlisted in the army. However the majority of them did not find a lawful way of earning their living and they went back to their old job.
In 1819 Cardinal Ercole Consalvi, the Secretary of State, asked the Pope for permission to raze to the ground Sonnino, a town near Piperno, because its inhabitants helped the brigands. 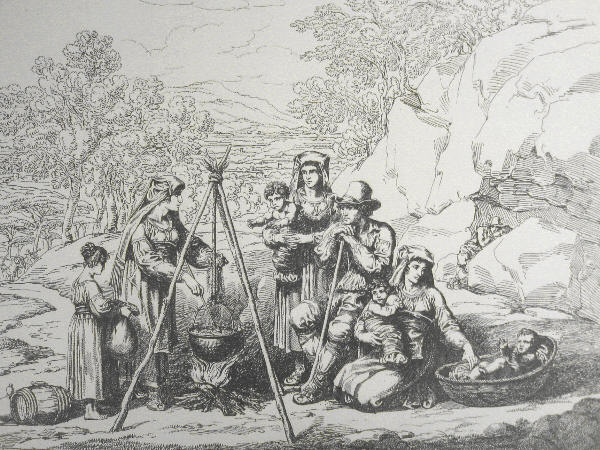 The poor life of farmers

While in northern Italy and in Tuscany improved living conditions and effective measures to tackle crime made travelling safe, the Papal State and the Kingdom of Naples became known as lands of outlaws. The root cause of this situation lay in the worsened living conditions of their farmers. Goethe and Charles Dickens both wrote about Fondi, a small town located a few miles south of Terracina.
In February 1787 Goethe wrote:
We now turned away from the sea and soon reached the plain of Fondi. This small area of fertile soil enclosed by not too rugged mountains welcomes every traveller with a smile. Most of the oranges are still hanging on the trees, the young crops - chiefly wheat - are showing green in the fields and there, below us, lay the little town. A solitary palm tree stood out, and we gave it a greeting.
In February 1845 Dickens wrote:
We enter by a gateless portal into Fondi. Take note of Fondi, in the name of all that is wretched and beggarly.
A filthy channel of mud and refuse meanders down the centre of the miserable streets, fed by obscene rivulets that trickle from the abject houses. There is not a door, a window, or a shutter; not a roof, a wall, a post, or a pillar, in all Fondi, but is decayed, and crazy, and rotting away. The wretched history of the town, with all its sieges and pillages by Barbarossa and the rest, might have been acted last year. How the gaunt dogs that sneak about the miserable streets, come to be alive, and undevoured by the people is one of the enigmas of the world.
A hollow-cheeked and scowling people they are! All beggars; but that's nothing. Look at them as they gather round. Some, are too indolent to come downstairs, or are too wisely mistrustful of the stairs, perhaps, to venture; so stretch out their lean hands from upper windows, and howl; others, come flocking about us, fighting and jostling one another, and demanding, incessantly, charity for the love of God, charity for the love of the Blessed Virgin, charity for the love of all the Saints. 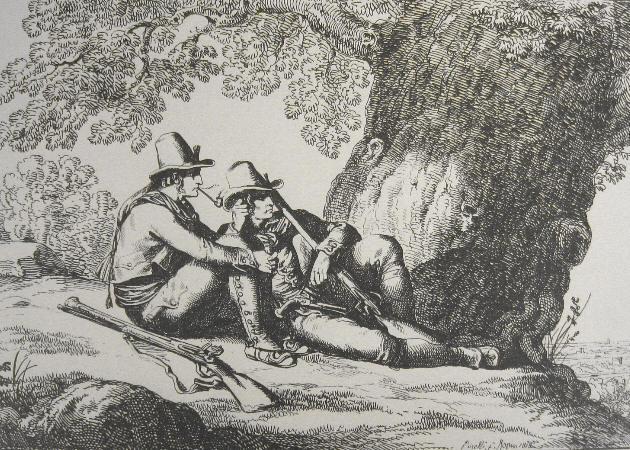 Brigands hiding in the woods

Dickens travelled to Rome accompanied by his wife and five children; the fame of the brigands made him write about them when he was still in Tuscany on his way to the border of the Papal State:
We then went on again, through a region becoming bleaker and wilder, until it became as bare and desolate as any Scottish moors. We halted for the night at the osteria of La Scala: a perfectly lone house.. there was a great wild rambling sala with four black doors opening into four black bedrooms. To say nothing of another large black door, opening into another large black sala with a suspicious little press skulking in one obscure corner: and all the knives in the house lying about in various directions. The waitress was like a dramatic brigand's wife, and wore the same style of dress upon her head. The dogs barked like mad; there was not another house within twelve miles; and things had a dreary, and rather a cut-throat, appearance.
They were not improved by rumours of robbers having come out, strong and boldly, within a few nights; and of their having stopped the mail very near that place.
Nonetheless nothing happened and Dickens went on with his account:
We had the usual dinner in this solitary house; and a very good dinner it is, when you are used to it. (..) take my word for it you may be well entertained in the worst Italian Inn, and may go from one end of the country to the other (despite all stories to the contrary) without any great trial of your patience anywhere, especially when you get such wine in flasks, as the Orvieto, and the Monte Pulciano.
During the following days the Dickens travelled through Acquapendente, Bolsena, Montefiascone, Viterbo, Ronciglione and eventually reached Rome. Much to their disappointment, they did not meet any brigands on their way. 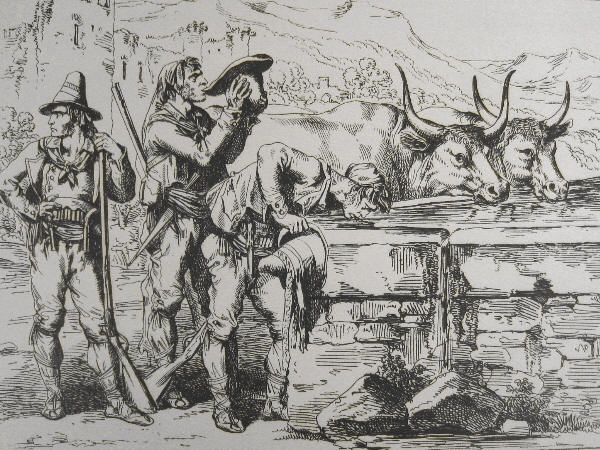 An unexpected use of hats

Dickens was on his first trip to Italy and yet he was able to note that a waitress was wearing the dress of a brigand's wife. This shows he was familiar with the supposed costume of the brigands. This may be due to the wide popularity gained by a series of etchings by Bartolomeo Pinelli (1771-1835), who in 1823 published a book with many engravings which portrayed the life of the brigands in the Roman countryside. Pinelli's brigands occasionally wore parts of a military uniform, but more often they were dressed as ordinary peasants. Few could afford shoes or boots; they protected their feet with ciocie, a sort of sandals which were kept in place by long leather laces. They were armed with old flintlock rifles and guns and with knives. 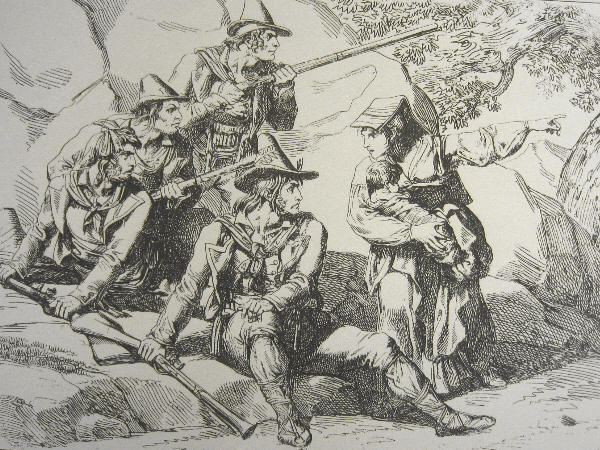 Dickens made up for not having seen a true brigand by describing the beheading in Rome of a young man who had killed a pilgrim. However in the XIXth century travellers to Rome were not the prime target of the brigands. They did not carry significant cash and their letters of credit were useless to the brigands. In addition the Papal police controlled the main road leading to Rome. 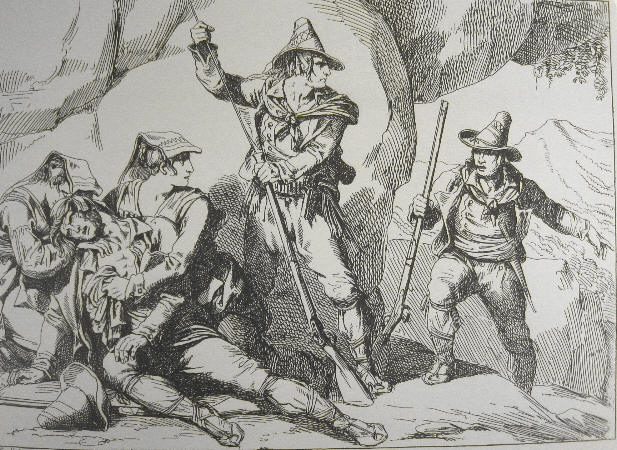 The end of a brigand

The brigands' main targets were the small towns which they attacked by surprise and where they robbed the houses of the richest families. This led to the development of a "Robin Hood" myth about some of the chief brigands.
One of them (Stefano Pelloni) with his band robbed all the audience attending a theatre performance. Soon after the event he was betrayed and caught and killed by the Papal police. Notwithstanding his crimes which included many killings, he became a popular hero and he was chanted in poems and songs as il Passator Cortese, re della strada, re della foresta (the Kind Boatman *, king of the road, king of the wood).
Another brigand (Gasparone) became famous by dictating his memories; he had plenty of time to do so, because he spent 45 years in prison.

(*) his father's and his own initial job.

You may wish to see a page on Bartolomeo Pinelli's Scenes of Ordinary Life.