S. Pietro in Vinculis
(Vasi at work in the Grand View of Rome) The Esquiline Hill of ancient Rome had three peaks: Cispius, the highest one, upon which S. Maria Maggiore was eventually built, Opius to the north of Colosseo and Fagutal at the top of which stands the church shown by Vasi in this plate. Latin fagus means beech tree and Fagutal indicated a wood of beech trees around a temple to Jupiter. Similar to the other peaks of the Esquiline Fagutal was the location of luxury domus (ancient Roman houses). In 1753, when Vasi made this etching, a series of monasteries and nunneries occupied the area which was in part abandoned and used by shepherds.
The view is taken from the green dot in the map below. In the description below the plate Vasi made reference to: 1) Part of the monastery of S. Francesco di Paola; 2) Street leading to S. Martino ai Monti (aka Via delle Sette Sale); 3) S. Pietro in Vinculis (today Italian Vincoli is more commonly used); 4) Palazzo del Cardinal Titolare. The small 1748 map shows also 5) Monastery of S. Antonio Abate; 6) Torre dei Cesarini; 7) Torre degli Annibaldi; 8) "Case dei Borgia". 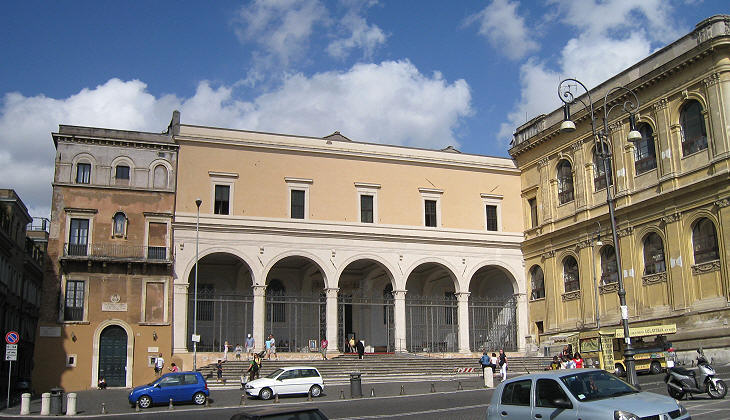 The bell tower and the adjoining monastery were pulled down at the beginning of the XXth century to leave room for a huge building which houses the Engineering Faculty of the main Rome University. The church is a "must see" site because it houses the statue of Moses by Michelangelo in the unfinished Monument to Pope Julius II. 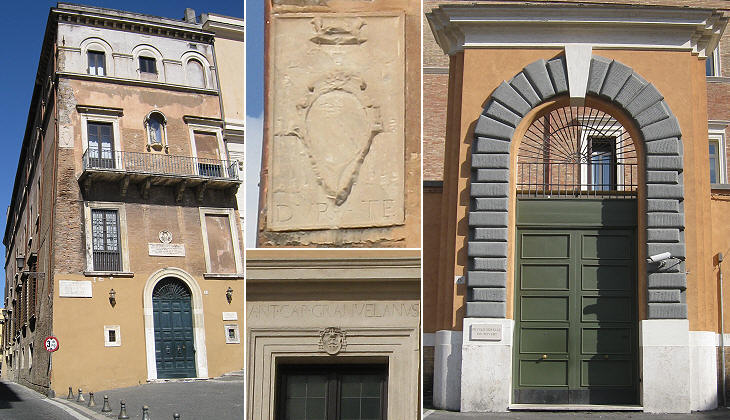 A minor change occurred in Palazzo del Cardinal Titolare (the residence of the titular cardinal of the church, i.e. its honorary priest) where the elaborate portal was replaced by a much simpler entrance.
Coats of arms on the palace and on the upper section of the façade make reference to Cardinal Antoine de Granvelle: he was more of a statesman than of a priest and he is mainly remembered for having conducted the negotiations for the marriage of Queen Mary I of England and King Philip II of Spain and for having been the de facto governor of the Low Countries (today's Belgium and Netherlands) in 1559-564 and the Viceroy of Naples in 1571-575.
At the far right of the plate Vasi shows a portal which led to the monastery of S. Antonio Abate; the portal is still there, but the monastery has been replaced by a complex of late XIXth century buildings. 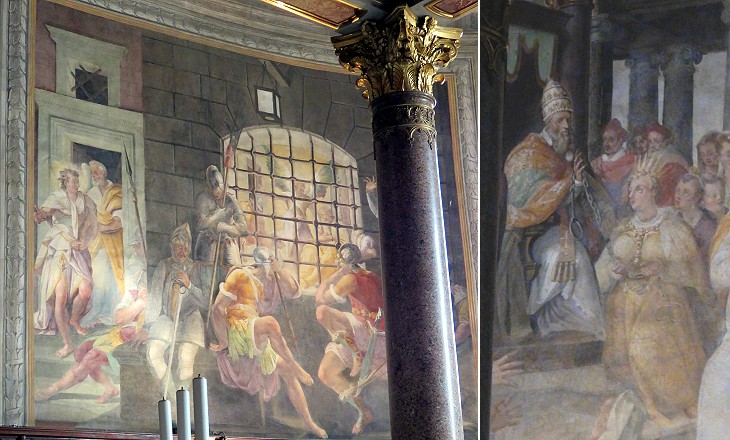 Vinculis (Latin for bonds/chains) is a reference to a miracle concerning the chains of St. Peter. In 439 Elia Eudocia, wife of Eastern Roman Emperor Theodosius II, made a pilgrimage to Jerusalem where she found several relics, including chains which had been used to bind St. Peter in that city; she sent them to her daughter Licinia Eudocia, who was the wife of Western Roman Emperor Valentinian III; eventually the chains were given to Pope Leo I who decided to keep them together with the chains used to bind St. Peter at Carcere Mamertino in Rome; at this point the two sections spontaneously joined together.
S. Pietro in Vinculis was built as early as 442 by Licinia Eudocia in order to celebrate the miracle and to house the chains; for this reason it is also known as Basilica Eudossiana. 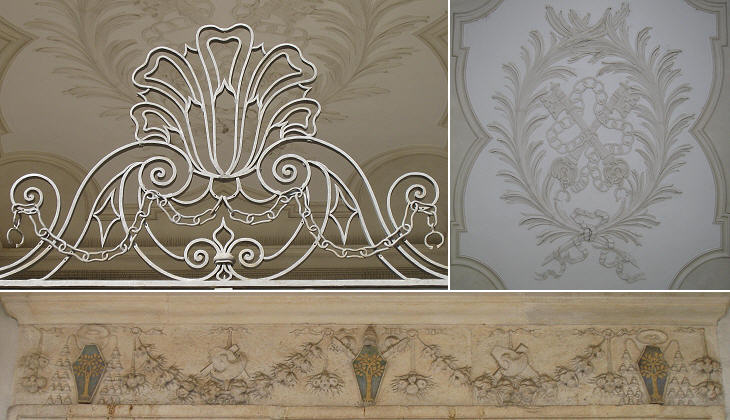 The miracle of the chains had also a political meaning: in 423, when Emperor Honorius died, his nephew and heir Valentinian III was a boy of four. The Western Roman Empire was ruled first by Joannes, an usurper, and then by Galla Placidia, the mother of Valentinian III. The marriage of Valentinian and Licinia Eudocia in 437 was seen as the reunion in the same family of the two parts of the Roman Empire.
The portico of S. Pietro in Vincoli was designed by Meo del Caprina in 1475 for Pope Sixtus IV. 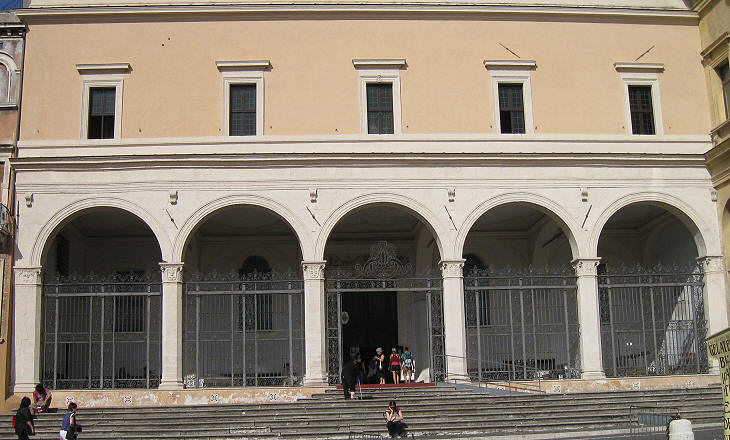 The façade was completed in 1570-578 by the addition of a storey above the portico. Notwithstanding major repairs made in the XVIIIth century to the portico of the church, the façade is still as it appeared in a 1588 Guide to Rome. 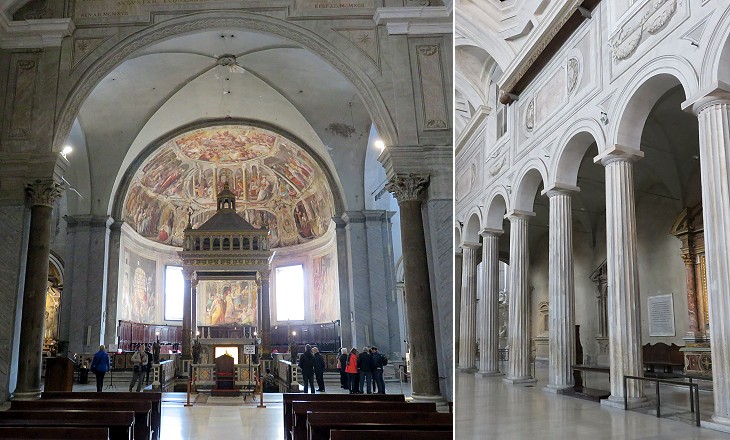 The interior of the church overall retains its original design, i.e. a basilica divided into three naves by rows of columns with a large apse at its end. The ancient columns separating the naves are all of the same size and material and they might have been made for the church, rather than being taken from other buildings. The canopy is a late XIXth century addition. 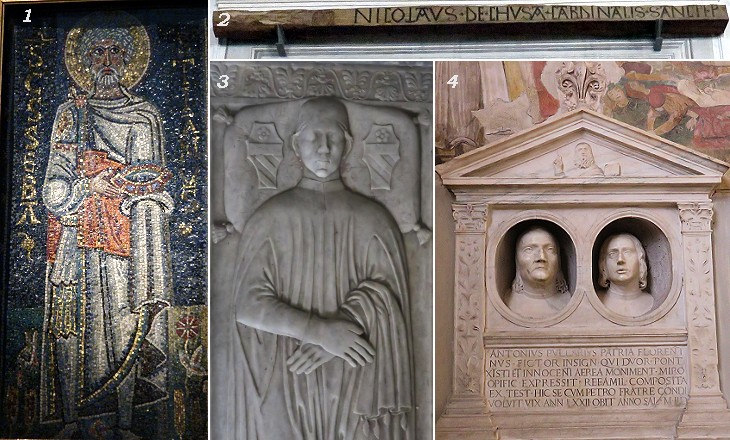 Minute fragments of mosaic have been found in the lower part of the apse. They are dated XIIIth century and they most likely belonged to a mosaic which replaced an older one. The fragments do not allow making hypotheses about its subject. The only remaining mosaic of the church decorated an altar to St. Sebastian who was portrayed as a courtier of Emperor Justinian, rather than according to the iconography we are accustomed to (you may wish to see a statue of the saint at S. Sebastiano fuori le mura).
S. Pietro in Vincoli, after its renovation by Pope Sixtus IV, became a preferred location for funerary monuments. Those shown in this page belong to the Renaissance, but the church houses many later monuments with symbols of death. 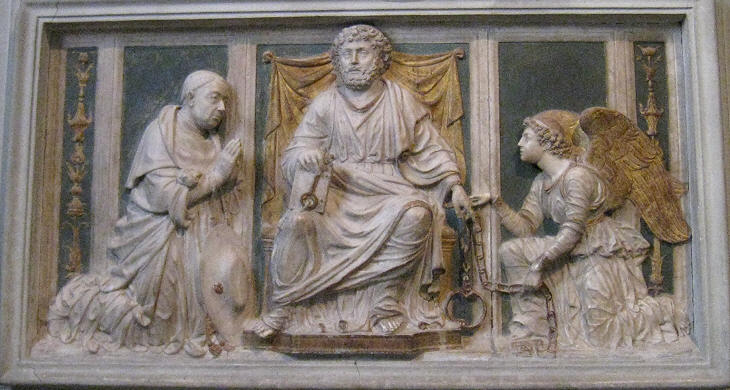 Andrea Bregno was the leading sculptor of Rome before Michelangelo; he excelled in reliefs, in particular in very low reliefs. His monument to Cardinal Cusano in S. Pietro in Vincoli is very interesting for its polychromy. Cardinal Cusano's fields of interest were typical of a man of the Renaissance; in addition to religious treaties, he wrote about astronomy, mathematics, law and philosophy. He also played a significant political role as adviser to Popes Eugenius IV and Nicholas V. 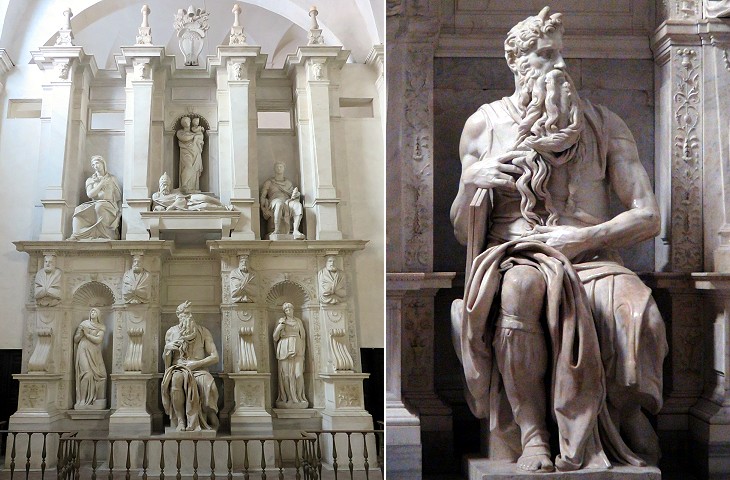 Yesterday saw ... "Moses" by Michelangelo. Beard too long; horns, though sacred, yet ludicrous as like satyr; rest of the figure superb.
From James Boswell's letters on the Grand Tour related to his visit to Rome in 1765.
No piece of statuary has ever made a stronger impression on me than this. How often have I mounted the steep steps from the unlovely Corso Cavour to the lonely piazza where the deserted church stands, and have essayed to support the angry scorn of the hero's glance!
Sigmund Freud - The Moses of Michelangelo - 1913 - Translation by James Strachey.
The statue of Moses was designed for a grand monument to be placed at the centre of S. Pietro (Nuovo), the new basilica which Pope Julius II decided to build on the site of the existing one. The death of the Pope in 1513 halted the completion of the monument; the new Pope Leo X Medici was hostile to the Della Rovere because both families competed for the control of the Duchy of Urbino. Eventually it was Francesco Maria Della Rovere, Duke of Urbino, who asked Michelangelo to rethink the design of his uncle's monument. This was completed in 1545 in S. Pietro in Vincoli; however the Pope is buried in a simple tomb on the floor of S. Pietro. 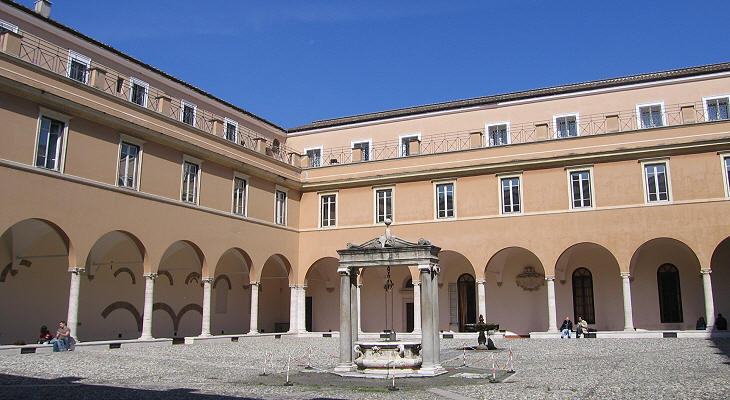 The monastery of S. Pietro in Vincoli belonged to the Canon Regulars of the Lateran. In 1900, after they had been evicted from the monastery, they bought the nearby former nunnery of S. Maria della Purificazione. The cloister of the monastery is now inside the University buildings, but it is definitely worth a visit. It is generally attributed to Giuliano da Sangallo who was asked by Cardinal Giuliano della Rovere to build a (lost) villa adjoining the church. In this villa the Cardinal kept a statue of Apollo which had been found at Anzio. When he became Pope Julius II he moved it to Casino del Belvedere and the statue became known as Apollo Belvedere. 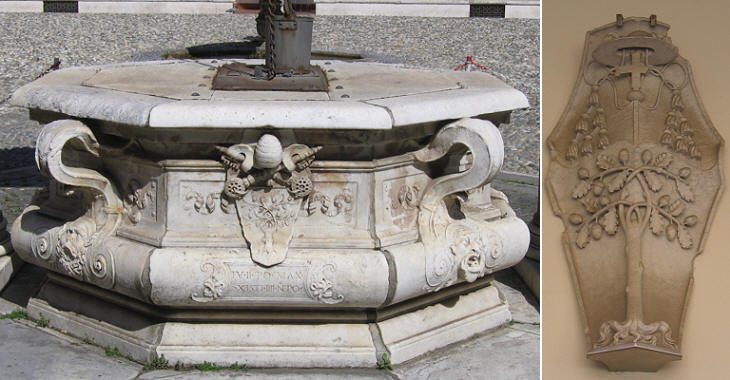 At the centre of the cloister an elegant well reminds us that this part of Rome did not have a supply of water until Pope Sixtus V built the aqueduct of Acqua Felice. The decoration of the well is attributed to Simone Mosca, a Florentine sculptor who worked with Michelangelo. 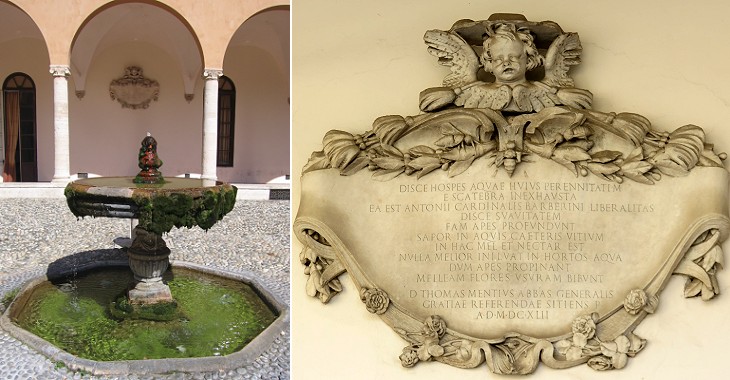 Behind the well a small spouting fountain is a sign of the return of a constant supply of water to the hills of Rome. A lengthy inscription in a very elaborate frame celebrates the virtues of bees, the heraldic symbol of the Barberini:

Broad meaning of the inscription: "Visitor, you should be aware that this perennial water which comes from a bubbling spring is a gift from Cardinal Antonio Barberini. Learn about sweetness; this is given to water by bees which take away vice and replace it with honey and nectar. There is no better nourishment for a garden, than that carried by bees for the never-ending appetite of flowers."
In 1644, after his uncle Pope Urban VIII died, Cardinal Barberini had to fly to France to escape imprisonment: Romans had had enough of the Barberini bees. 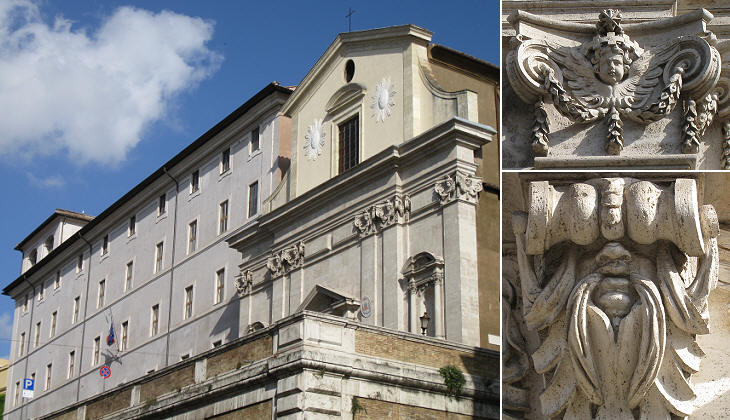 The church and the large monastery dedicated to St. Francis of Paola are now isolated on high ground because of the large street (Via Cavour) which was opened to link Stazione Termini (the Central Railway Station) with the southern part of the city. The church was built in 1623 and enlarged in 1650 at the expense of Donna Olimpia Aldobrandini (see the capital with her family's heraldic symbols - stars and stripes) and it has some interesting details. Olimpia Aldobrandini was the last of her family and thus the heiress of many important properties; she was the wife of Prince Paolo Borghese; when she lost her husband in 1646 she was convinced by Pope Innocent X to immediately marry his nephew Francesco Maria Pamphilj. By this marriage the Pamphilj acquired the palace in Via Lata where they still live. The initial decoration with stuccoes of 1650 was completed in a second phase in the early XVIIIth century by Luigi Barattoni. At that time the uso of stuccoes was very popular as a less expensive alternative to that of marbles. In some instances they were largely gilded (as at il Gesù), but in this case the decoration was soberer, in line with that of churches by Francesco Borromini, e.g. S. Carlo alle Quattro Fontane. 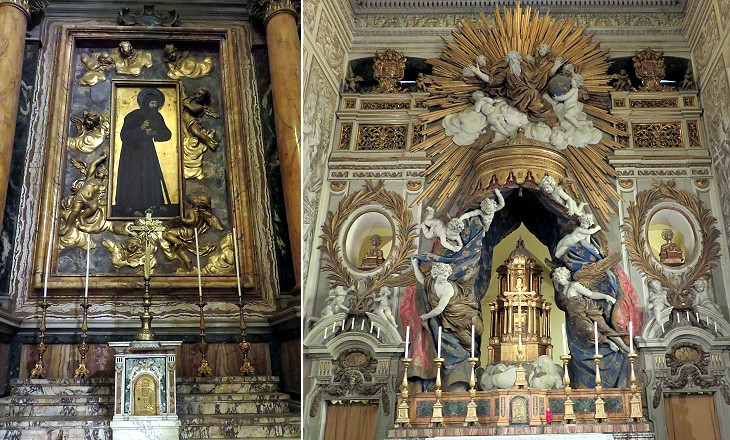 (left) S. Francesco di Paola, copy of a XVth century painting in a church in Calabria; (right) main altar designed by Giovanni Antonio de' Rossi, a pupil of Gian Lorenzo Bernini (see a page on the use of colour in the churches of Rome)

St. Francis of Paola was a hermit from Paola, a town in Calabria, who was canonized in 1519, a relatively short time after his death in 1507. He founded the Order of Minims, which has its headquarters in the monastery adjoining the church. 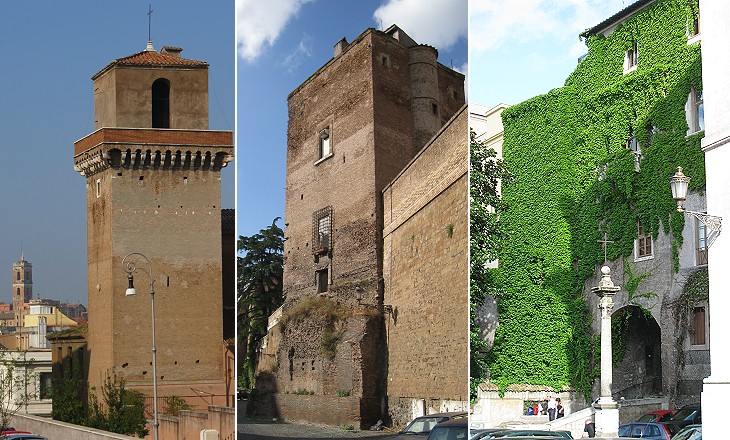 The area near S. Pietro in Vincoli retains some interesting medieval buildings:
a) a tower next to S. Francesco di Paola which came into the possession of the Cesarini in the XVth century when it was given a Renaissance appearance; it eventually became the bell tower of the church;
b) a medieval tower in good condition and not modified by excessive restoration; it belonged to the Annibaldi who (in the XIIIth century) were fierce enemies of the Frangipane who lived not far from here in a fortified section of Colosseo; the ciceroni of the past claimed that Emperor Nero stood on this tower while Rome was burning;
c) a building of the Cesarini where it was thought Vannozza Cattanei lived; she was the mistress of Pope Alexander VI Borgia. For this reason the house is called Case dei Borgia; the Cesarini had family bonds with the Borgia: in 1493 the Pope gave the cardinal's hat to Giuliano Cesarini, whose brother Gianandrea had married Gerolama Borgia, a daughter of the Pope.

You may wish to read William Dean Howells' account of his 1908 visit to S. Pietro in Vincoli (with comments on Michelangelo's Moses) and to these towers.