S. Cesareo in Palatio
(Vasi at work in the Grand View of Rome) 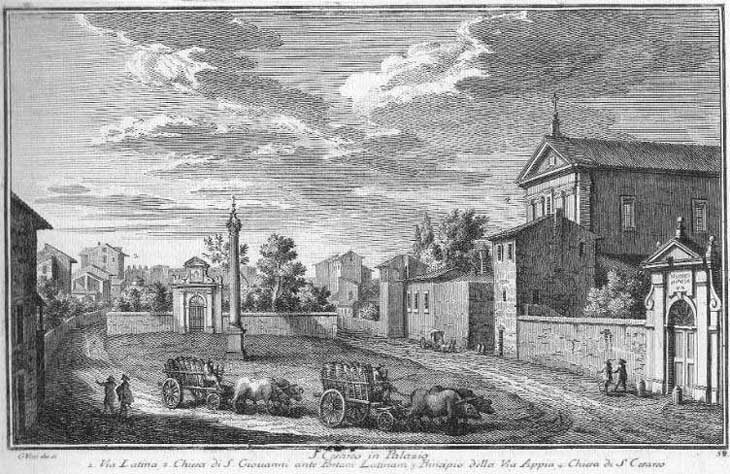 The third book of etchings showing the Wonders of Ancient and Modern Rome was published by Giuseppe Vasi in 1753. It covered the seven Basilicas and the oldest churches of Rome. Many of these old churches were located in the eastern part of the city, which in the XVIIIth century was almost unpopulated. The views therefore have often a rather rural aspect. This plate shows the site where Via Latina (left) branches off from Via Appia (right). We are inside the city walls, but the two ancient roads were used only by peasants who came to Rome to sell their produce.
The view is taken from the green dot in the small 1748 map here below. In the description below the plate Vasi made reference to: 1) Via Latina; 2) S. Giovanni a Porta Latina; 3) Via Appia; 4) S. Cesareo in Palatio. 2) is shown in another page. The small map shows also; 5) Casino del Cardinal Bessarione; 6) Villa Appia delle Sirene. The dotted line in the small map delineates the border between Rione Ripa (below) and Rione Campitelli (above). 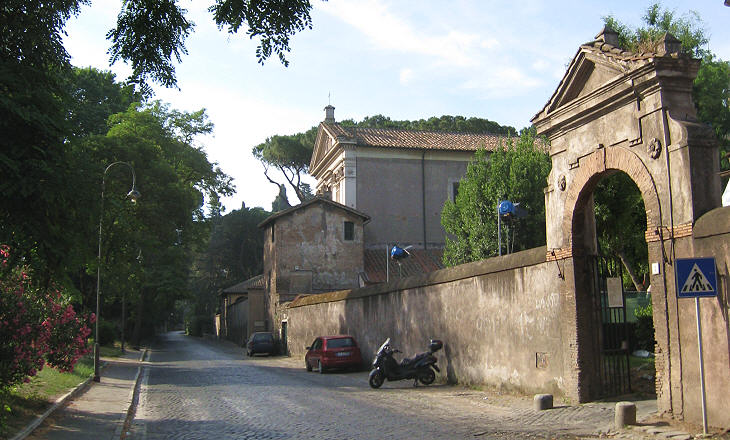 A few steps away from the location shown above a large avenue (Via Cristoforo Colombo) linking Rome with Eur, a modern quarter, is busy and noisy because of traffic congestion, but the site where Via Appia and Via Latina split is peaceful as it was in 1753 (at least on Sundays when the two roads are reserved to pedestrians). 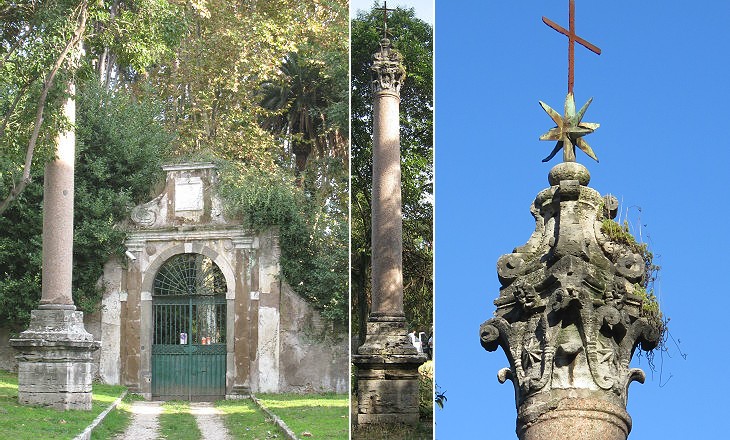 The gate behind the column was the entrance to Vigna Passarini and it was decorated with a sacred image; this has been replaced by the inscription Horti Galateae, the name given to the garden beyond the gate by Giulio Aristide Sartorio (1860-1932), an Italian painter and film-maker (you may wish to see his View of Mount Circeo). He most likely dedicated his villa to Galatea because the sea-nymph was portrayed by Raphael in a famous fresco or because in the XVIIIth century the name was given to the legendary statue by Pygmalion which came to life. In 1918 Sartorio shot Il Mistero di Galatea, a short movie, in this villa and at Anticoli Corrado, a picturesque small town where many painters had their studios. 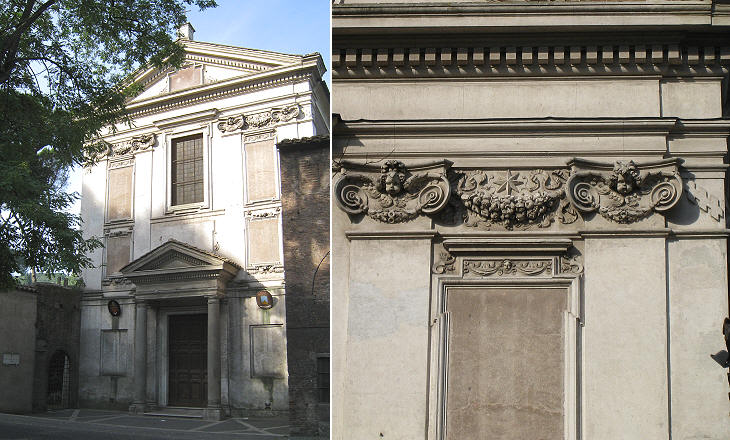 The small square in front of S. Cesareo is empty and silent. The old church was restored in 1603 by Cardinal Cesare Baronio during the pontificate of Pope Clement VIII and it was decorated with the heraldic symbols of the Pope which were placed also on the capital of the ancient granite column opposite the church. Nearby SS. Nereo ed Achilleo was the titular church assigned to Cardinal Baronio. The origin of the name of the church is uncertain; it probably derives from Aedes Caesarum in Palatio, meaning House of the Emperors on the Palatine; a lost church called S. Cesareo in Palatio was built near S. Sebastiano al Palatino, but eventually the name was attributed to this church. Archaeologists have found traces of an ancient mosaic under its floor. It is very similar to that at Terme di Nettuno at Ostia. Ceiling (one of the finest wooden ceilings of Rome): (left) coat of arms of Pope Clement VIII; (right) St. Caesarius of Terracina

Cardinal Baronio is known for having written Martyrologium Romanum, a revised list of saints which was endorsed by Pope Gregory XIII. Although historical evidence on St. Caesarius was very slim, the Cardinal, maybe not to displease the inhabitants of Terracina, a town of the Papal State where the martyr was sentenced to death, confirmed him as a saint.
From Martyrologium Romanum - Sanguis Martyrum Semen Christianorum: Tarracinae, in Campania, natalis sancti Caesarii Diaconi, qui, diebus multis in custodia maceratus, postea, cum sancto Iuliano Presbytero, in saccum missus et in mare praecipitatus est. (Terracina in the historical region of Campania, was the birthplace of St. Caesarius, a deacon who was kept in prison for many days and then, together with St. Julian, a presbyter, was placed in a sack and was thrown into the sea). 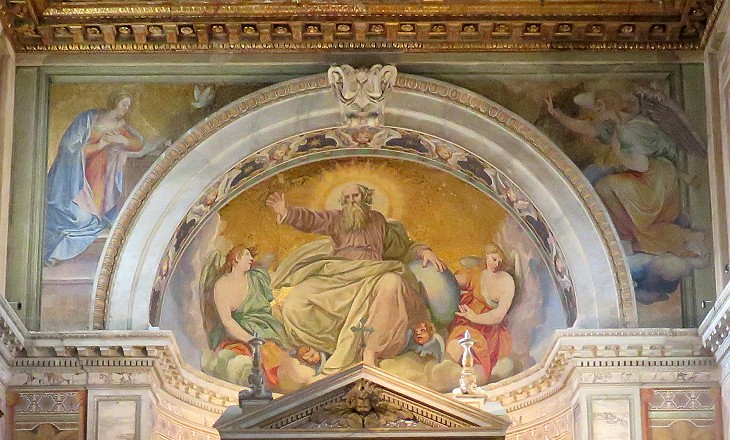 Apse: mosaic by Francesco Zucchi based on a draft painting by il Cavalier d'Arpino

When S. Cesareo was restored frescoes, rather than mosaics, had been used to decorate the walls of Roman churches for the last 300 years. Cardinal Baronio however felt that the apse of the church deserved to be decorated with a mosaic, similar to what occurred in other churches of great antiquity (see a page on the golden mosaics of Rome). A similar approach with another mosaic by Zucchi was followed for the apse of S. Maria Scala Coeli, another church which was completely redesigned at the end of the XVIth century. 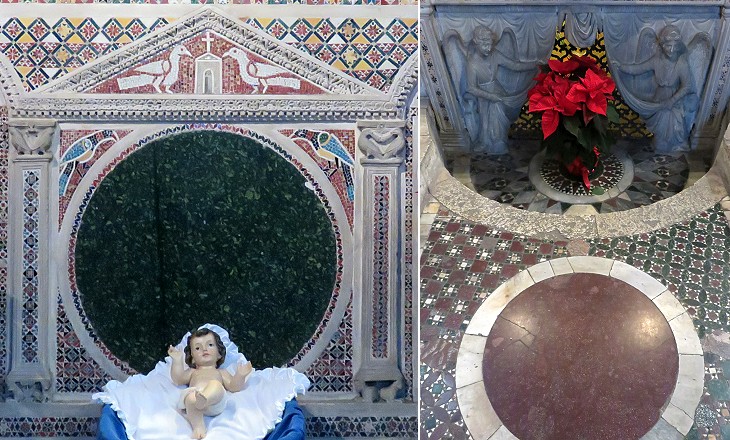 The interior of the church contains some fine Cosmati works; they are the result of assembling elements of different origin; it is thought that they might come from the transept of S. Giovanni in Laterano, the medieval decoration of which was renovated at the same time as S. Cesareo was restored. Ambo (oblong pulpit). It was made up by assembling nine pieces from other monuments/decorations; the small sphinxes can be noticed also in the cloister of S. Giovanni in Laterano 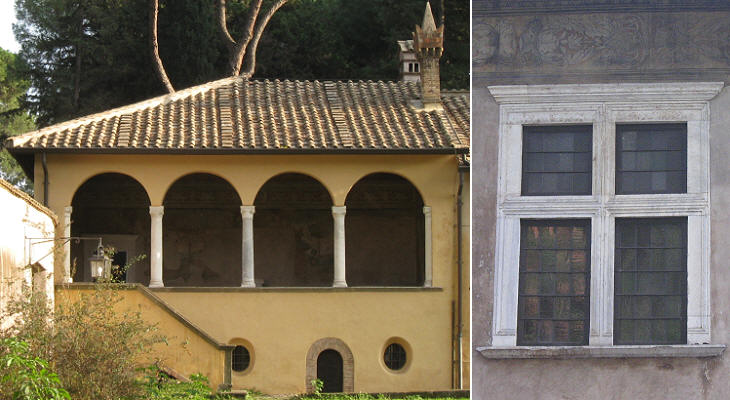 Basilios Bessarion, known in Italy as Giovanni Bessarione, was born in 1403 at Trebizond. When he became a monk he assumed the name of Bessarion, after St. Bessarion, a Vth century Egyptian hermit. His life however was not that of a hermit. In 1439 he accompanied Byzantine Emperor John VIII to the Council of Florence during which the Greek Orthodox and the Roman Catholic Churches reached an agreement over their different views on theological matters. After the Council he remained in Italy and he was appointed cardinal by Pope Eugenius IV. He spent his life trying to save as much as possible of the Byzantine heritage which included records of many works by ancient philosophers and theologians. After the fall of Constantinople in 1453 he helped many Greek refugees.
He was assigned S. Cesareo as titular church and this has led to associating a XVth century casino (small suburban house) near the church with him. Today historians believe it was built by Cardinal Giovanni Battista Zeno, who succeeded Bessarione as titular of S. Cesareo. Cardinal Zeno was a nephew of Pope Paul II, whose palace in Rome was characterized by windows similar to those of this house. 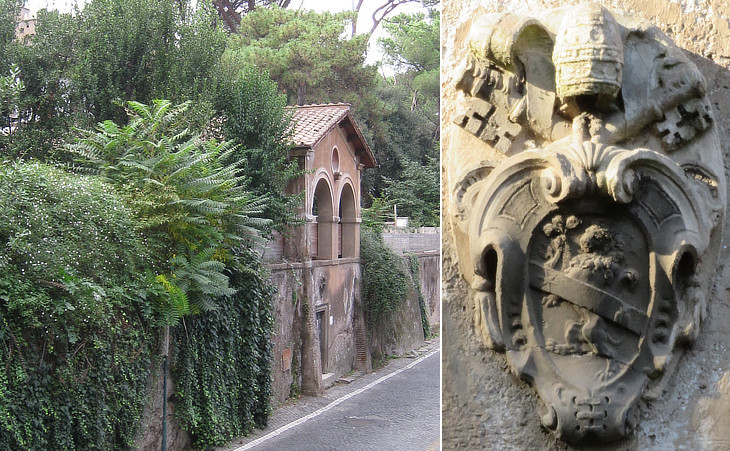 (left) XVIth century loggia above the entrance on Via Appia; (right) coat of arms of Pope Sixtus V

Midway between S. Cesareo and Porta S. Sebastiano an unassuming door retains a well preserved coat of arms of Pope Sixtus V. A marble slab on the adjoining wall (see the image used as background for this page) bears the inscription: Villa Appia delle Sirene (Mermaids), a name full of mystery. In the XVIIIth century however the site was known as Vigna Moroni after the name of its owners. The Moroni are known for Cardinal Giovanni Morone who played a major role during the final sessions of the Council of Trent.
In 1705-1710 ninety-two funerary chambers containing inscriptions, glassware and terracotta lamps were discovered at Vigna Moroni. Many of the items were eventually purchased by Sir Hans Sloane and are now part of the British Museum collections. In 1780 Sepolcro degli Scipioni, a very large family tomb, was unearthed opposite Villa Appia delle Sirene and in the 1930s other tombs were found along the walls behind Vigna Moroni. 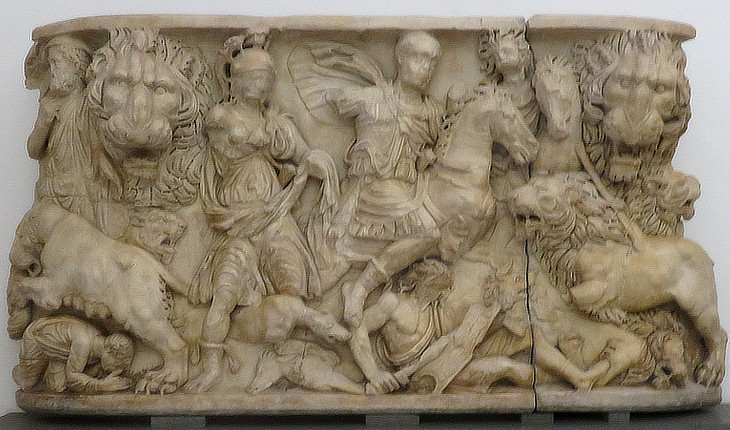 Musei Capitolini: sarcophagus which was found at Vigna Moroni in 1817 (IIIrd century AD)

The front of a large tub-shaped sarcophagus depicts an animated lion hunting scene, with lionesses, fallen hunters, warriors, framed on the top left and right by two lion heads. On the left is the personification of Virtus, the Roman goddess of courage and military valour. The deceased in military attire is in the centre of the scene riding a horse. The sarcophagus probably belonged to a high ranking Roman officer or an important magistrate. Its imagery can be interpreted as a figurative theme that celebrates the courage shown by the deceased in life and also as a symbolic victory over death (the fallen lion) and the consequent immortality earned by the deceased through his virtues. This work belongs to the tradition of large sarcophagi with lion hunting that was mainly popular in the IIIrd and IVth centuries. See similar sarcophagi at Palermo, Barcelona and Reims.

Next plate in Book 3: Basilica di S. Sebastiano.
Next step in Day 5 itinerary: Porta Latina.
Next step in your tour of Rione Ripa: Bastione del Sangallo.