Cardinal Ippolito Aldobrandini was elected pope on January 30, 1592 after a short conclave. His three predecessors (Urban VII, Gregory XIV and Innocent IX) had been in power for a total of one year and 25 days. The cardinals' choice fell on the rather young Ippolito Aldobrandini (he was then 56) to assure a lasting leadership to the Church. His pontificate lasted more than 13 years (the Pope died on March 5, 1605). The Pope was of Florentine descent, the Aldobrandini being one of the most influential families of Florence. His coat of arms shows a stripe with merlons on both sides and six stars. The colours are gold on blue. The background of this page shows the coat of arms in a mosaic in Cappella Aldobrandini in S. Maria sopra Minerva in Rome. 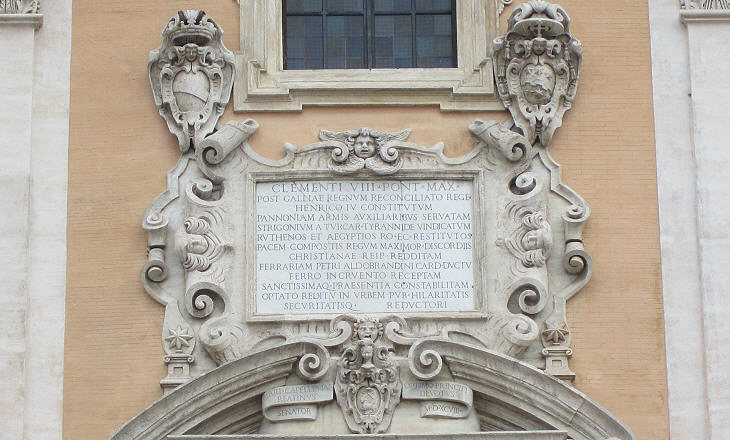 The main success of the Pope (first point of the inscription) was the decision by King Henry IV to embrace the Catholic faith putting an end to the religious wars in France. To celebrate the event Clement VIII erected a little monument (a cannon topped by a cross). The second point of the inscription mentions the efforts made by the Pope to support resistance to the Turks in Hungary (Pannoniam in the inscription): he sent money and troops in 1595, 1598 and 1601; his nephew Gian Francesco Aldobrandini died in the battle of Varadino in 1601. The third achievement mentioned in the inscription relates to the acceptance of the papal prerogatives by the Egyptian Coptic Church and by the Ruthenian (of today's Ukraine) Church which since then has been called Uniate (united) as it acknowledges the papal supremacy, but it retains its own liturgy. A fourth event quoted in the inscription is the peaceful acquisition of Ferrara. 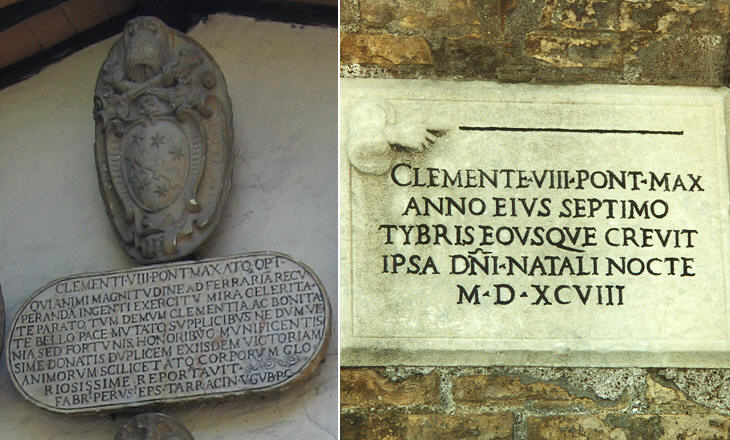 Inscriptions at the entrance of Rocca di Spoleto (left) and near Spedale di S. Spirito in Rome (right)

The acquisition of Ferrara is celebrated in more detail in an inscription at the entrance of Rocca di Spoleto. We learn that the conflict (which arose following the death without direct heirs of the Duke of Ferrara, Alfonso II d'Este) was close to turning into a war when eventually an agreement was reached with the pretender Cesare d'Este who retained control of Modena and Reggio, but ceded Ferrara to Clement VIII. The Pope had the support of Henry IV of France who threatened to send his troops. The pontificate of Clement VIII was not always a path strewn with roses: on Christmas Night 1598 an exceptional flood of the Tiber covered most of Rome: the water reached Piazza di Spagna (and the fountain of la Barcaccia - the ugly boat is most likely a reminder of the event) and its pressure was such that the new bridge built by Pope Gregory XIII collapsed. The level reached by the river is marked by a hand and an inscription near Spedale di S. Spirito. The memory of Clement VIII is marred by two sentences where notwithstanding his name he showed no mercy: in 1599 he endorsed the death sentence of Beatrice Cenci, a young woman who had instigated the murder of her father Francesco, a brute; in 1600 he sent to the stake Giordano Bruno, a Dominican monk.

Clement VIII concentrated his efforts in Rome for the 1600 Holy Year and there is little evidence of public works promoted by him in the provinces of the Papal State. A notable exception is the entrance of the church belonging to the Compagnia dell'Orazione e della Buona Morte in Piazza Piccinino in Perugia. The entrance looks like a wall gate and it has a large inscription.

It is easy however to find a large number of coats of arms of Clement VIII in the environs of Rome. Cardinal Pietro Aldobrandini built a very large villa in Frascati which was designed by Giacomo della Porta and Carlo Maderno. The Villa was called Belvedere (fine view) because it allowed a view over the Roman Campagna and Rome. The building which is located above the town of Frascati is clearly visible from Rome. The entrance shows the heraldic symbols of the Aldobrandini, but the vases are decorated with the dove and the fleur-de-lis of the Pamphilj. The last heir of the Aldobrandini married Camillo Pamphilj, nephew of Pope Innocent X and the properties of the Aldobrandini were acquired by the Pamphilj.

Details of the decoration of Villa Aldobrandini

The gardens of Villa Belvedere were embellished by fountains and terraces and they provided a pattern for many other villas of the XVIIth century. The stripe and the stars of the Aldobrandini are the recurring theme of their decoration. 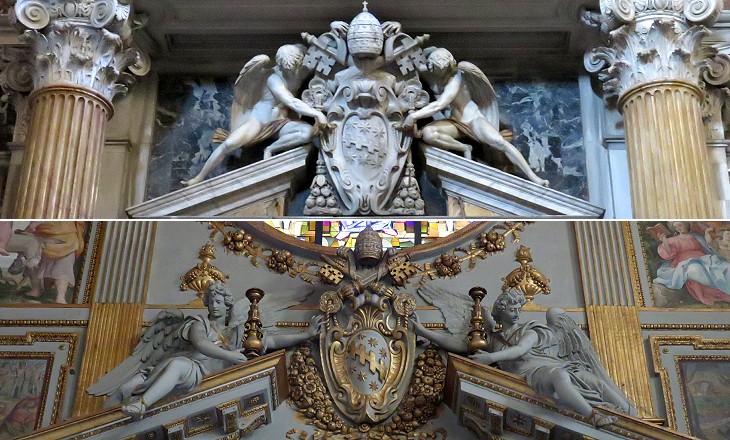 Inner (lateral) façade of S. Giovanni in Laterano (above) and of S. Maria Maggiore (below)

Pope Clement VIII supported a large program of public works in part already initiated by Pope Sixtus V. In S. Pietro he completed the inner decoration of the dome and Cappella Clementina. Aldobrandini coats of arms or heraldic symbols can be found in many other churches, e.g. S. Cesareo in Palatio, S. Prassede, S. Niccolò in Carcere and S. Francesco di Paola.
In S. Giovanni in Laterano the angels holding his coat of arms are a work by il Valsoldo. Those at S. Maria Maggiore are attributed to Camillo Mariani who worked at Cappella Aldobrandini in S. Maria sopra Minerva. By comparing the two couples of angels one can see the move from Renaissance to Baroque angels, although they were sculptured in the same period.

Coats of arms in the transept of S. Giovanni in Laterano (see other ceilings of Roman churches)

In S. Giovanni in Laterano Clement VIII rebuilt the transept and he is celebrated both in the ceiling (designed by Taddeo Landini and executed by a team of talented cabinet-makers) and in the decoration of the altars. The coats of arms of the altars with their use of coloured marbles (taken from the ruins of Roman temples) provided a pattern for the coats of arms of Pope Urban VIII in the Canopy of S. Pietro by Gian Lorenzo Bernini. Coats of arms or heraldic symbols of Clement VIII can also be found in this website in Monte di Pietà, Palazzo Apostolico in Vaticano, Villa Aldobrandini a Magnanapoli and Palazzo Pamphilj al Collegio Romano.