If you came to this page directly, you might wish to read a page with an introduction to this section or page one which covers Urbino when it was ruled by the da Montefeltro or page two which shows the interior of Palazzo Ducale first. 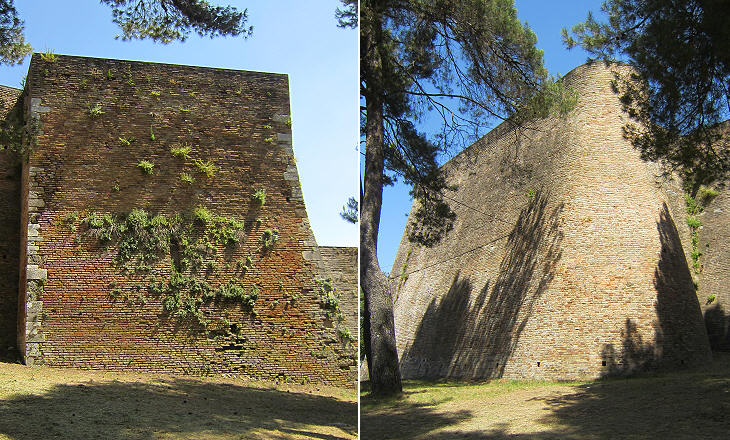 Federico da Montefeltro, Duke of Urbino, after having enlarged his possessions in the early 1460s, commissioned Francesco di Giorgio Martini, an expert in gunpowder who helped him in his campaigns, a renovation of the fortifications of Urbino as well as of those of other towns (e.g. Sassocorvaro, San Leo and many others).
Perhaps for the first time "modern" bastions replaced the traditional towers of medieval enclosures. They projected from the walls and allowed defenders to fire on the assailants from a side position (flanking or enfilade fire). For a major example of this type of walls you may wish to see those which were built by the Venetians in 1540-1570 in Candia (today's Iraklion in Greece). 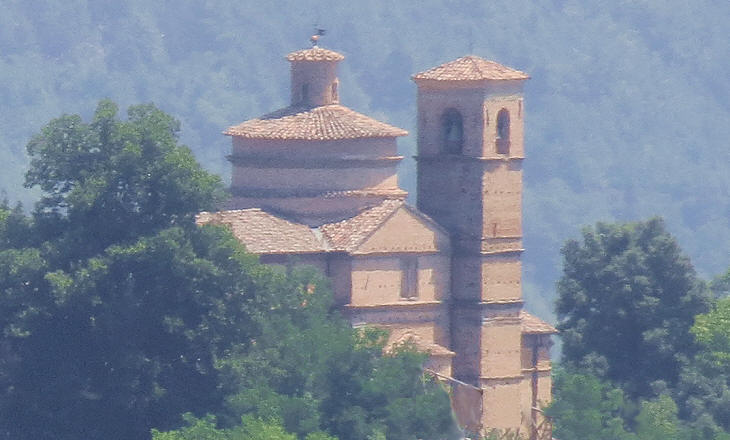 Guidobaldo I, Federico's son, succeeded his father in 1482, at the age of ten and for some years he ruled with the help of Ottaviano degli Ubaldini, his uncle. The latter was eventually suspected of having used magic to make Guidobaldo unable to procreate. His marriage to Eleonora Gonzaga, daughter of the Marquis of Mantua, was childless and Guidobaldo adopted as son Francesco Maria della Rovere, his sister's son and at the same time nephew of Pope Julius II. In 1508 Guidobaldo died and he was buried next to his father in S. Bernardino degli Zoccolanti, a church a mile away from the walls of Urbino which was designed by Francesco di Giorgio Martini. 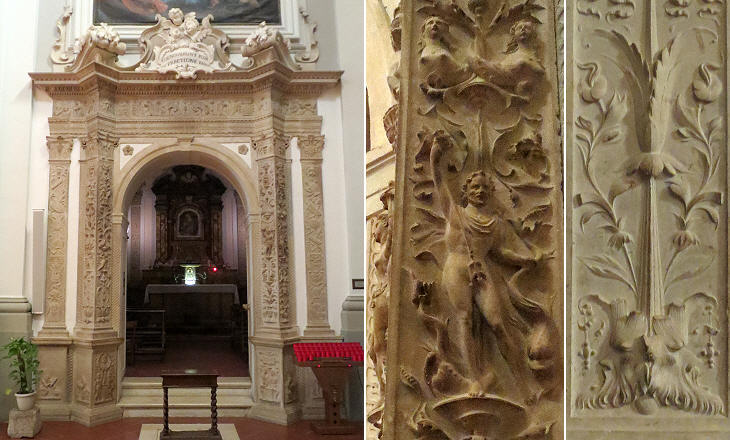 Interior of S. Francesco: decoration from a former chapel of the Dukes of Urbino designed by Costantino Trappola in 1516-1527. The image used as background for this page shows another relief of the chapel depicting an imaginary town

Francesco Maria della Rovere was governor of Senigallia and this port was included into the Duchy when he succeeded Guidobaldo. In 1517 the della Rovere were ousted from their small state by Lorenzo de Medici, nephew of Pope Leo X, but in 1521 they returned and for the following century their power was unchallenged. They had close contact with the Gonzaga of Mantua and Francesco Maria married a Gonzaga. Marriages were arranged to establish links with other powerful families: Guidobaldo II, son of Francesco Maria, married Vittoria Farnese, granddaughter of Pope Paul III. Francesco Maria II, the third della Rovere duke, married Lucrezia d'Este, daughter of the Duke of Ferrara and Federico Ubaldo, the last duke, married Claudia de' Medici. daughter of the Grand Duke of Tuscany. 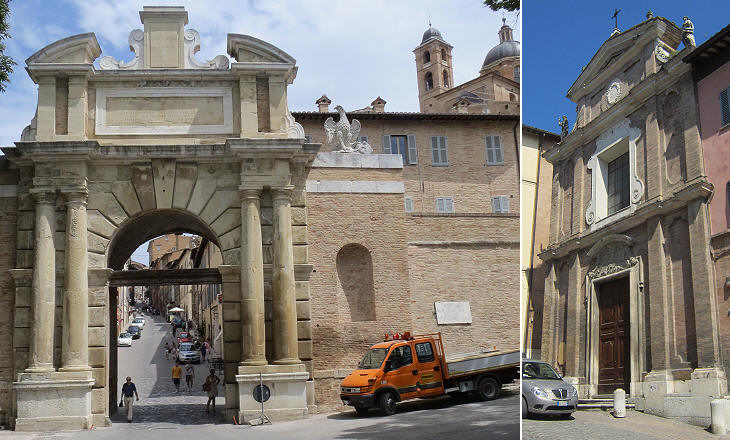 The della Rovere often preferred to live in Pesaro or in Gubbio, but their official residence remained in Urbino. In 1621 the main gate of the town, that where travellers from Rome and Florence arrived, was redesigned as a triumphal arch with a well-wishing inscription greeting Claudia de' Medici (then seventeen) and her husband Duke Federico Ubaldo (then sixteen) after their marriage in Florence. Immediately after her entrance into town the bride was shown S. Francesco di Paola, a church built near Porta di Valbona as an ex-voto for the much awaited birth of her groom in 1605. 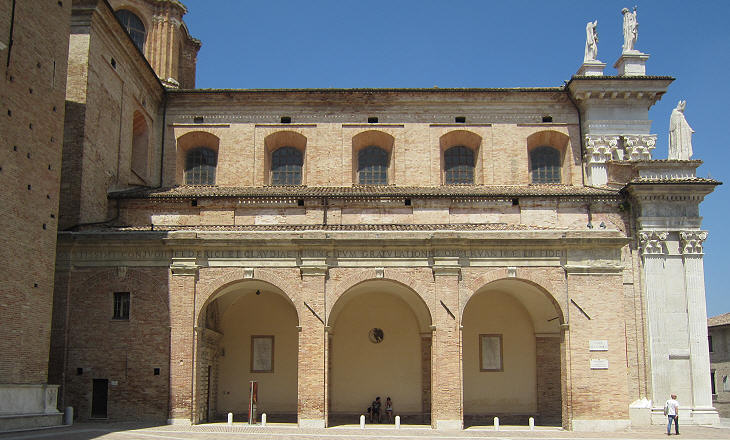 Apparently the couple spent only one night in their apartment at Palazzo Ducale, but opposite it and adjoining the Cathedral a portico was built with another well-wishing inscription. All this interest in a happy marriage was due to the fact that the Duchy needed a male heir, otherwise it would have been incorporated into the Papal State and ruled by a cardinal. One year later the couple had a daughter, Vittoria. Her birth was greeted as an indication that other babies would follow and possibly one of them would have been a boy. In 1623 however Federico Ubaldo was found dead in his room and the fate of the Duchy was sealed. Duke Francesco Maria II, who had abdicated in favour of his son, returned to power, but he was convinced by Pope Urban VIII not to try to give another male heir to the Duchy which in 1631 became a direct possession of the Papal State. 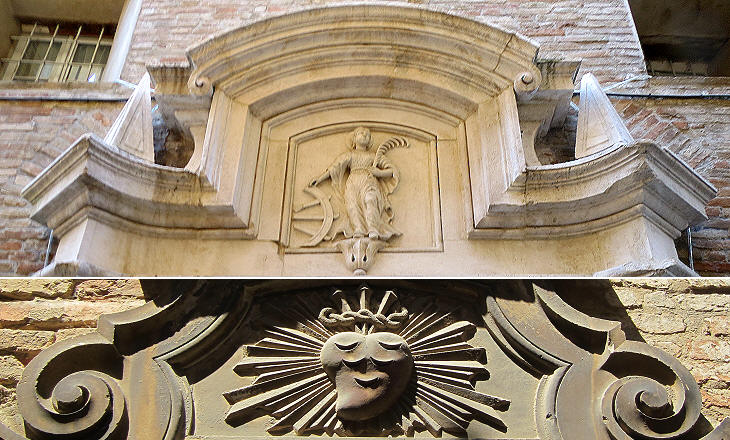 The Book of the Courtier by Baldassarre Castiglione was published in 1528. It described how a gentleman or a lady should properly behave at the court of a Renaissance lord. The book was an immediate success and it was soon translated into French, Spanish, German and English. Castiglione based his book on the experiences he had had at the court of Guidobaldo I da Montefeltro. The court of Urbino continued to be a centre of Renaissance way of living with the first della Rovere dukes. With the passage to the direct government of the Papal State Urbino lost its Renaissance atmosphere and it acquired that of the Counter-Reformation, which meant the construction of many churches, oratories and chiefly nunneries. 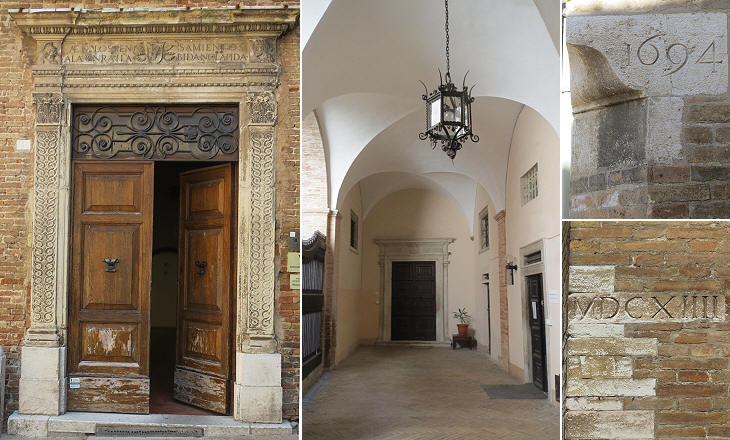 (left) Portal of Palazzo Ivarra (with an inscription in Spanish); (centre) Palazzo Antaldi; (right) years of construction of buildings in "il Poggio" the hill of Urbino where Palazzo Ducale is situated

The portals and windows of Palazzo Ducale influenced the design of many other palaces, so that Urbino has preserved its Renaissance appearance to a remarkable extent, although here and there one can see other architectonic styles. 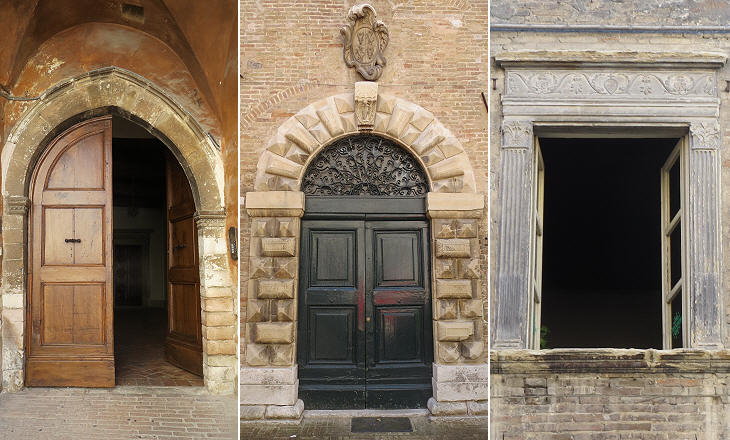 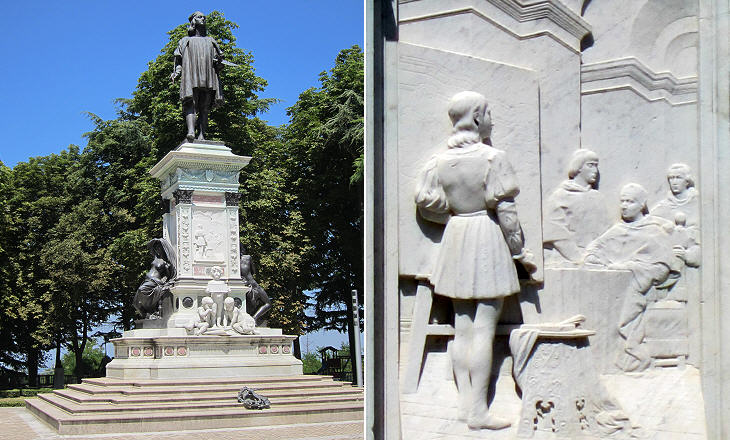 (left) Monument to Raphael by Luigi Belli; (right) relief showing the painter in the act of portraying Pope Leo X (you may wish to see some portraits of members of the papal court by Raphael)

A page on Urbino cannot avoid mentioning Raphael, who was born there in 1483. His father was a painter at the court of Duke Federico and initially Raphael worked for his son Guidobaldo.
In 1897 a large Monument to Raphael was erected between Palazzo Ducale and the Cathedral, but eventually it was relocated immediately outside the walls of the town, because its size and bright colours did not match the surrounding buildings. 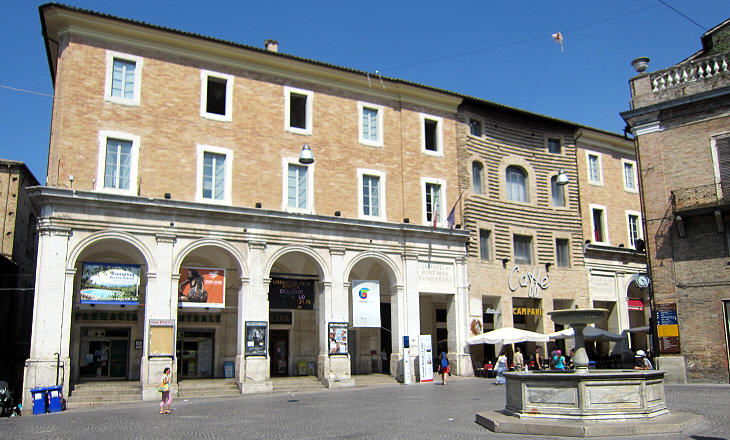 A large palace housing a boarding school has been renamed after Raphael, but it does not have any connections with the painter. It was built at the initiative of Pope Clement XI who was born in Urbino and who promoted the development of his hometown. The building was completed after many years and several architects were involved in its design. You can learn more about what this pope and Cardinal Annibale Albani, his nephew, did for Urbino in a page dedicated to this topic.

Return to page one: the da Montefeltro or page two: inside Palazzo Ducale or move to page four: XVIIIth century monuments.