Links to this page can be found in Book 2, Map C3, Day 7, View D7, Rione Parione and Rione Regola. 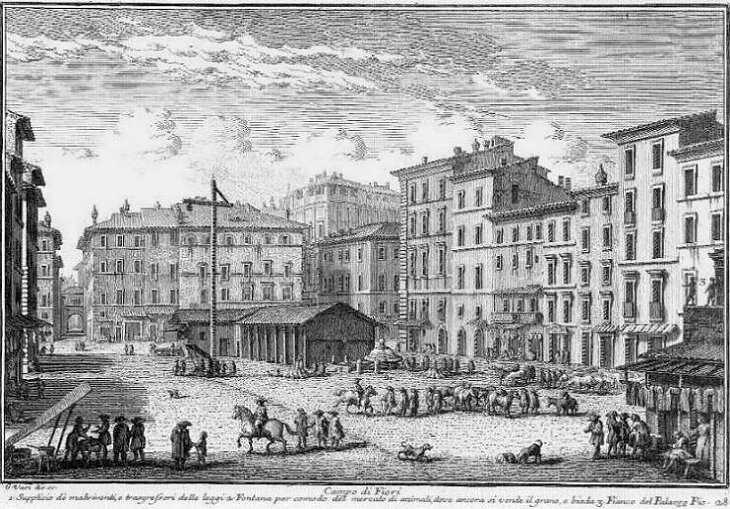 This 1752 etching by Giuseppe Vasi shows one of the busiest squares of XVIIIth century Rome. It did not house an important church or a public building, but many inns, shops and street sellers of cooked food were located there or in the nearby streets. Twice a week it housed a horse and fodder market (see the image used as background for this page). Jacket makers had their workshops at the beginning of Via dei Giubbonari (see an enlargement of the etching), the street which led to S. Carlo ai Catinari. Other nearby streets were named after beccai (butchers), cappellari (hat makers) and baullari (trunk makers).
The gallows is a reminder that Campo dei Fiori, because of its central location, was often chosen for the public punishment of criminals, especially of heretics. It was not used to execute death penalties, but to punish lesser offences or as an instrument of torture. A rope hung from a pulley to which the culprit was tied and then he was raised and lowered to the ground several times; the street leading from Campo dei Fiori to Piazza Farnese is still called Via della Corda (Rope Street).
The view is taken from the green dot in the map below. In the description below the plate Vasi made reference to: 1) The gallows; 2) Fontana della Terrina; 3) Palazzo Pio. 3) is covered in another page. The small 1748 map shows also 4) Via del Pellegrino; 5) Albergo della Vacca. The dotted line in the small map delineates the border between Rione Regola (left lower quarter) and Rione Parione. 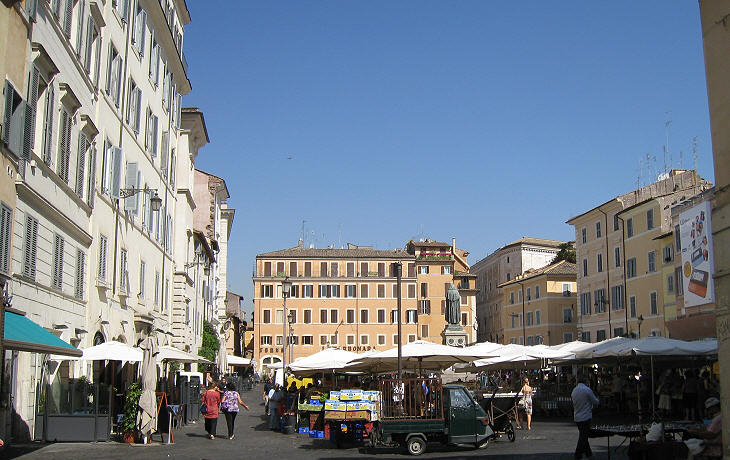 In 1869 the horse and fodder market was replaced by the vegetable and fruit market which was previously located in Piazza Navona. The gallows was replaced by the 1889 mournful monument to Giordano Bruno, so Campo dei Fiori continues to be characterized by life and death symbols.
I found the market at the foot of the statue given over, not to flowers, as the name of the place might imply, but to such homely fruits of the earth as potatoes, carrots, cabbages, and, above all, onions. There was a placidity in the simple scene that pleased me: I liked the quiet gossiping of the old market-women over their baskets of vegetables. Read more of William Dean Howells' account of his visit to Campo dei Fiori in 1908.
The square is slightly longer than it was in the XVIIIth century as a block of houses at its western end was pulled down in 1858. Eventually the long and low building shown in the plate which housed a stable and a fodder house was demolished. 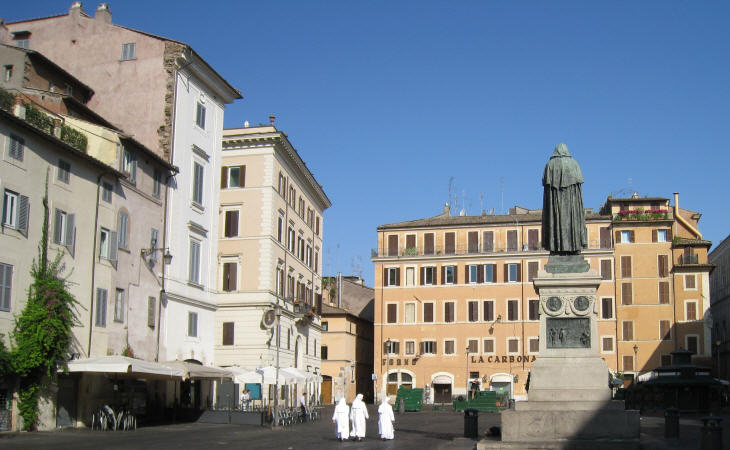 In recent years, to the dismay of residents, Campo dei Fiori has become the venue of "pub crawlers", both locals and foreigners, who spend their evenings and nights in the many "Irish pubs" which have replaced some of the old shops.

Campo dei Fiori was not paved with stone until 1456 and that explains why it was called Campo (field/grassland); the reference to Fiori (flowers) is uncertain: a literary option suggests that Flora, a woman loved by Pompey, had her house in this location which is very near Teatro di Pompeo.
In 1473 Pope Sixtus IV built Ponte Sisto on the ruins of an ancient bridge, in order to facilitate the orderly flow of pilgrims between the two sides of the Tiber in the forthcoming 1475 Jubilee Year. The new bridge increased the importance and the real estate value of Campo dei Fiori and in 1483 the Pope promoted the cleaning of the area and the opening of Via Florea which linked the new bridge with Ponte S. Angelo. The new street was known as Via del Pellegrino because it was used by pilgrims on their way to S. Pietro.
In 1497 Pope Alexander VI widened Via del Pellegrino. It was an early case of conflict of interest, because Vannozza Cattanei, the Pope's mistress, lived in Via del Pellegrino and had two inns in Campo dei Fiori. 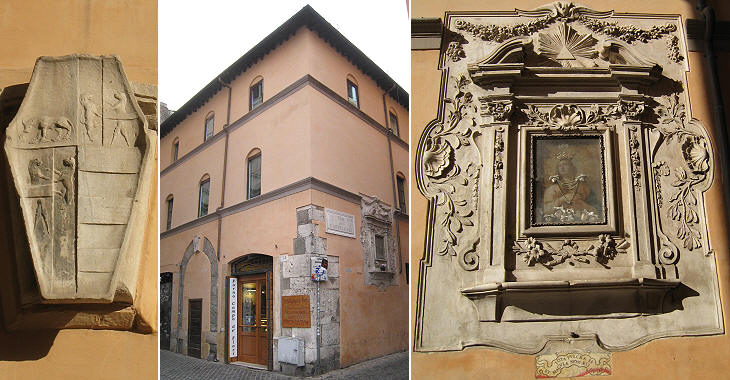 Vannozza Cattanei bore Pope Alexander VI (when he was still a cardinal) four children. Two of them, Cesare and Lucrezia Borgia became famous on their own: Cesare for his cunning and ruthless attempts to create a kingdom for himself (for Machiavelli he was the perfect example of Italian Principe); Lucrezia for her beauty and for her alleged use of poison in getting rid of her second husband.
In 1500 Vannozza Cattanei bought an inn near Campo dei Fiori (now it is at one of the corners of the square) where she placed a complex coat of arms: the cow (It. vacca) portrayed on its top left quarter gave the name to the inn. Her second inn was located on the other side of the street. 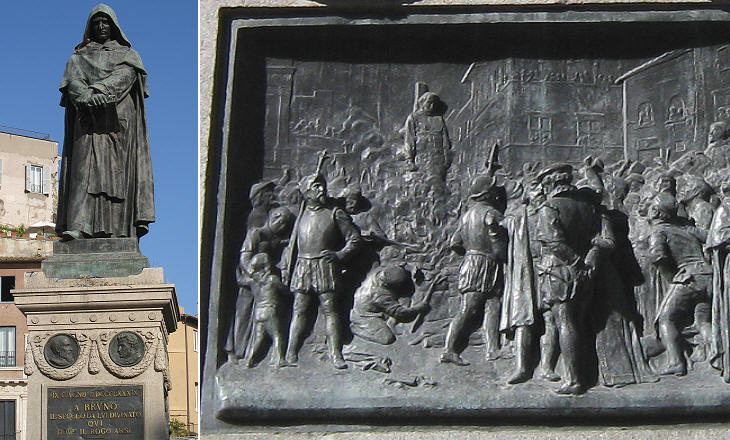 The philosopher/theologian Giordano Bruno, a Dominican monk, was burnt alive on February 17, 1600 as a heretic in Campo dei Fiori. The monument is a memorial also to eight other philosophers/theologians persecuted by the Roman Church because of their views (e.g. John Wycliffe and Jan Hus).
Pope Leo XIII threatened to leave Rome when the monument was inaugurated and in 1929 Pope Pius XI asked for its removal.

Ceremony on the anniversary of Bruno's death

Every year the anniversary is celebrated by the Italian Association for Freethinking. It is a short ceremony to which the Association invites the Mayor of Rome. In today's Italian political environment the monument and the ceremony are an embarrassment to politicians who fear to displease the Catholic hierarchy; the Mayor prefers to send a representative who delivers a carefully worded speech; in 2009 a person who was unaware of Bruno's fate, by listening to it, would have thought that the philosopher died in a road accident.

(left) Fontana della Terrina (tureen) and enlargement of part of the inscription on its "handle" (fa dal bene e lassa dire - engage in good deeds and do not mind what others say); (right) an unforeseen, but unfortunately very frequent modern use of the fountain

The fountain was called la Terrina because of its shape. It was designed during the pontificate of Pope Gregory XIII (1572-1585); the lid was added in 1622 to prevent horses from directly drinking from it. The fountain was placed close to the ground because of the low water pressure provided by Acqua Vergine, the aqueduct which supplied it; la Barcaccia in Piazza di Spagna is another low fountain supplied by Acqua Vergine and Mostra dell'Acqua Vergine (Fontana di Trevi), notwithstanding its imposing design, could not be embellished with vertical spouts, because of lack of pressure. The design of Fontana della Terrina was criticized; the small inscription on its "handle" is an ironical reply to its detractors.
The fountain was at the centre of the square and it was dismantled in 1889 to make room for the monument to Giordano Bruno; in 1925 it was reassembled in Piazza della Chiesa Nuova. 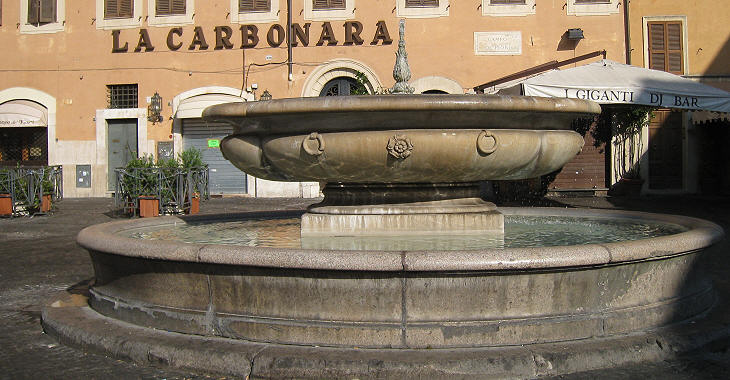 In 1898 a copy of the fountain, without the lid but standing upon a high pedestal, was built at the western end of Campo dei Fiori.