You may wish to read a page with an introduction to this section and a map or a page on the Great Mosque of Tunis first. 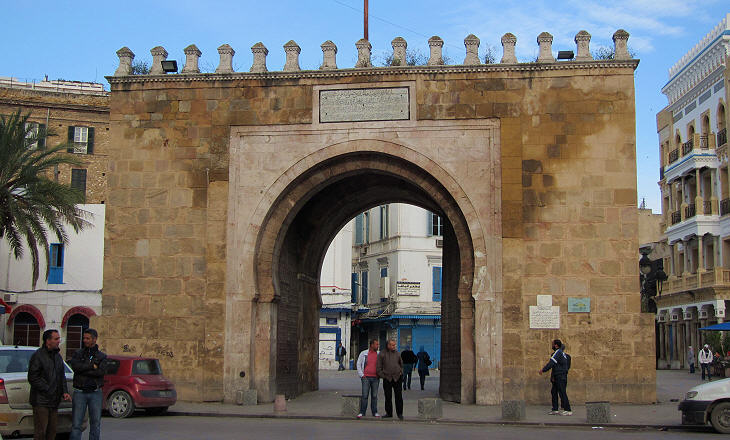 Tunis is located between a shallow lagoon and a salt lake. The Arabs dug a canal through the lagoon to allow ships to reach the city, but large ships moored at La Goulette (from Italian gola, throat) on the narrow passage between the sea and the lagoon.
In Travels or Observations relating to several parts of Barbary and the Levant (1738) Thomas Shaw noted: The many lakes and marshes that surround Tunis might probably render the situation less healthy were not these inconveniences in a great measure corrected by the great quantity of mastic, myrtle, rosemary and other gummy and aromatic plants which frequently communicate a sensible fragrancy to the air.
Today this fragrancy is definitely gone for many reasons including the fact that the French decided to reclaim the section of the lagoon adjoining Tunis to build a modern town there. The Sea Gate was renamed Porte de France (a name it has retained) and it marked the border between the new and the old town. The gate itself is not very old as it was built in 1848. 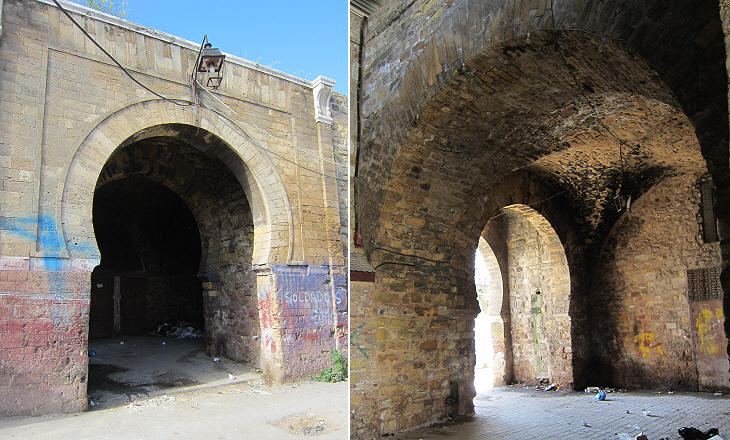 In 1535 Emperor Charles V conquered Tunis and reinstated the local ruler who had been ousted by Hayruddin Barbarossa. The Spaniards placed a large garrison at La Goulette and were the de-facto ruler of Tunis until 1574 when the Ottomans led by Koca Sinan Pacha conquered the city. The Spaniards and after them the Ottomans built a new enclosure to the north of the old one; sections of these walls can still be seen near Bab el-Khadra. 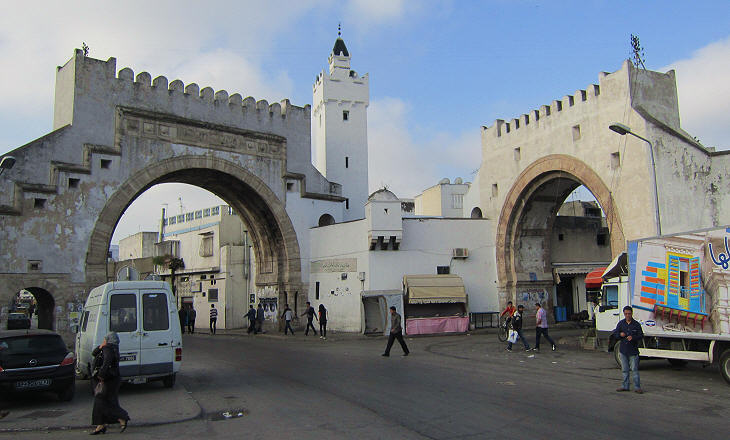 Bab el-Khadra, one of the gates of the larger enclosure

Bab el-Khadra, the Green Gate, most likely owes its name to the nearby gardens where vegetables were grown. In 1881 the French pulled down the original small gate and replaced it with a sort of double triumphal arch to facilitate access to the old city. The square in front of the gate is usually very crowded, but the photo was taken very early in the morning. 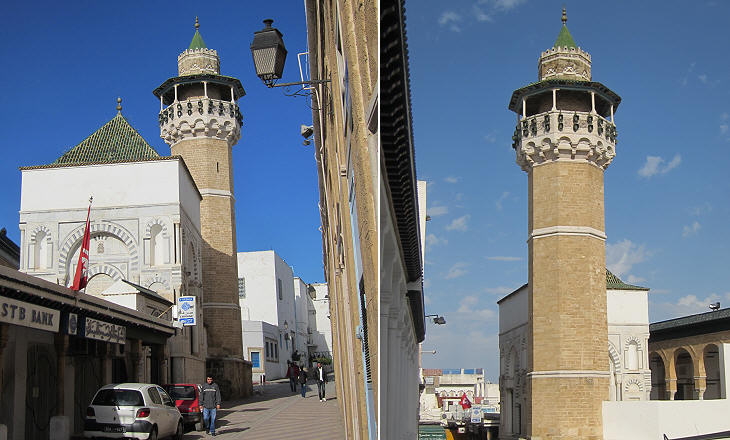 After having conquered Tunis in 1574 the Sultans appointed a pacha to rule the city and its territory which included most of today's Tunisia. In 1598 Othman Dey, a Janissary who had participated in the seizure of Tunis, became the actual ruler of the country leaving the pacha a merely honorific role. He managed to transmit his powers to Youssef Dey, his son-in-law who built the first Tunisian mosque having Ottoman features in 1616. The design of the minaret however was not based on the "lancet" minarets of Sultan Ahmet Camii which was being completed at Constantinople, but it resembles the Mameluke "lighthouse" minarets of Egypt and Syria. You may wish to see the Mameluke minarets of Damascus (photographed in February 2011). 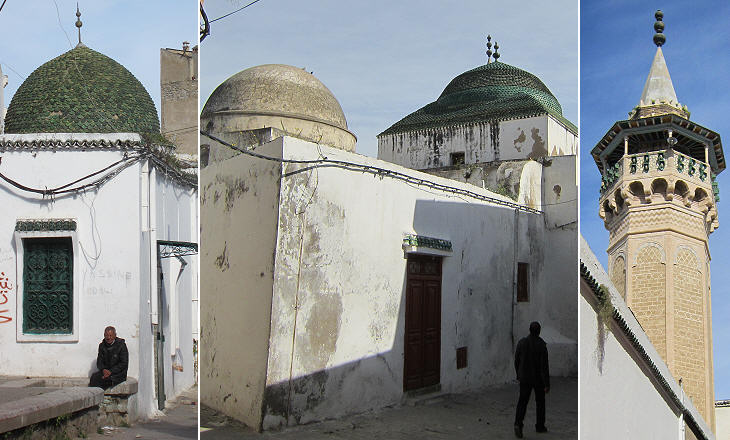 El-Jedid (New) Mosque aka the Mosque of the Dyers

Dey was the title of the Turkish military commander of Tunisia. Othman Dey created a new position which was responsible for the yearly collection of taxes; the holder of this position was called bey.
The bey himself collects the tribute in person for which purpose he visits with a flying camp once every year the principal parts of the country traversing in the summer season the fertile country in the neighbourhood of Keff and Bejah (in the Mejerda River valley) and in the winter the several districts betwixt Kairwan and the Jereed (the southern part of Tunisia). Shaw
Eventually the bey acquired more power than the dey and his authority was confirmed by the Sultan with the title of pacha. The first dynasty of Beys of Tunis was founded by Murad Bey, who was appointed bey by Youssef Dey and eventually became a pacha.
The Muradid dynasty ruled Tunisia until the beginning of the XVIIIth century when it was replaced by the Husainid dynasty, the last bey of which was deposed in 1957 when Tunisia became a Republic.
Al-Husayn, the first bey of the new dynasty built a small mosque in a very popular neighbourhood, but its minaret is very tall and similar to that of Sidi Youssef Mosque. 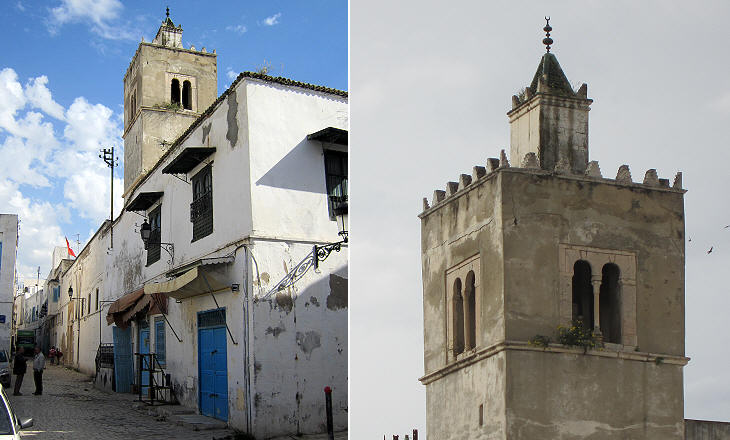 This and three other medreses (Koranic schools) were built by Ali Pacha I Bey who ruled Tunisia between 1735 and 1756. They could be regarded as an indication that Ali was a very pious man, but probably he just needed to be regarded as a pious man, because he had seized power by ousting his uncle Al-Husayn with the help of Algerian troops who sacked the city mercilessly (Thomas Shaw labelled him as monster of princes for his many treacherous and cruel acts). The country was dragged into a civil war which lasted five years and eventually ended with the execution of Al-Husayn at Kairouan.
In 1756 Youssef, a son of Ali, revolted against his father and sought the help of the Algerians who seized Tunis a second time. Ali was strangled and the city was sacked again. 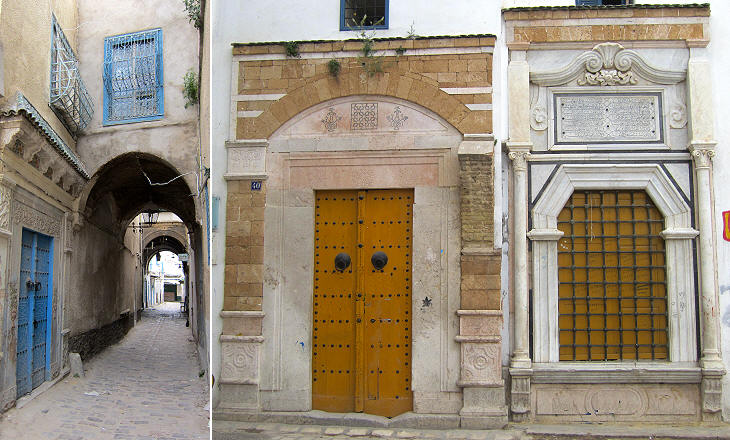 The full name of the founder of the Husainid dynasty was Al-Husayn ibn Ali at-Turki, because his father was a Turk. Although the authority of the Sultan over Tunisia was just nominal, many families of the Tunisian ruling class were of Ottoman origin and Constantinople was the city which Tunis tried to resemble.
sebil were kiosks adjoining a mosque or a medrese which were introduced in Constantinople in the late XVIth century and where passers-by were offered glasses of water (see the sebil of Yeni Cami) and one of them can be found in Tunis too. 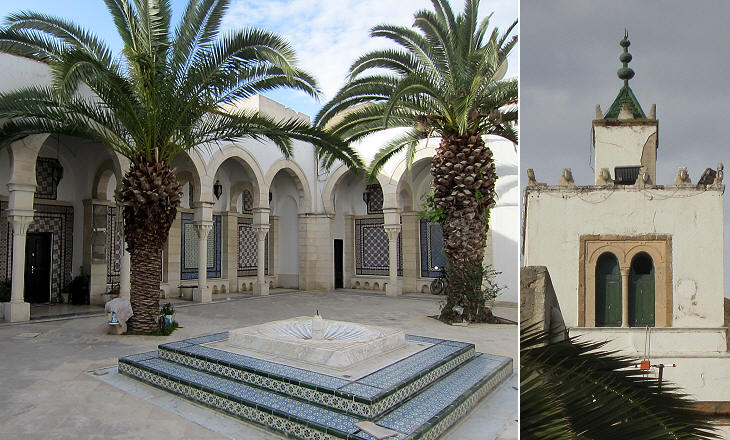 zaouia is a complex of buildings which usually includes a mausoleum, a medrese and a small mosque. Sidi Mahrez was a 10th century pious man who is regarded as the patron saint of Tunis. His mausoleum was embellished in the XVIIIth and XIXth centuries. The small minaret reflects the influence on Tunisian architecture of the period (XIIth-XIIIth centuries) during which the country was part of a Moroccan Caliphate which included parts of Spain (Al-Andalus in Arabic). This influence was strengthened by the arrival of many Muslim refugees from Spain in the early XVIIth century (you may wish to see some Andalusian-style buildings at Testour and Zaghouan). 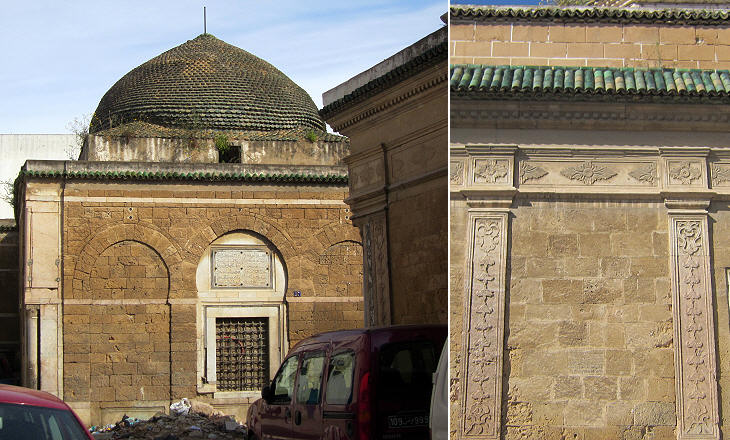 turbe is the Turkish word for mausoleum (you may wish to see the turbe at Muradiye near Bursa) and it was utilized by Ali Pacha II Bey (1759-82) to designate a royal mausoleum where all members of the Husainid family were to be buried. In essence it was a lay monument rather than a religious one, such as a zaouia or a medrese which often housed a mausoleum.
Tourbet el-Bey shows a change in style because traditional Ottoman features were combined with Italian ones. The marbles and most of the tiles which decorate the interior came from Italy. 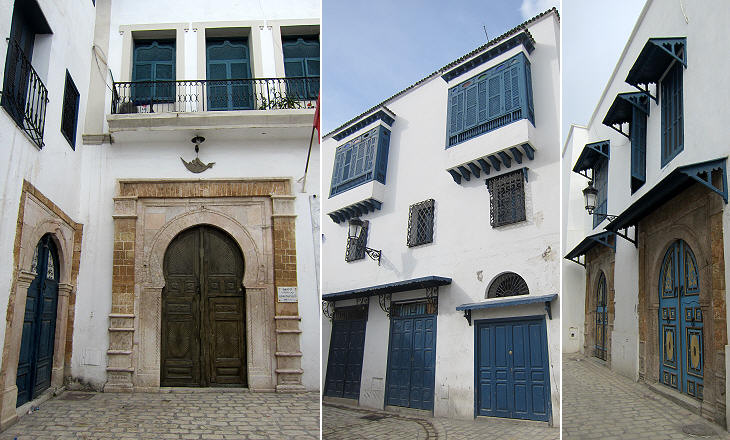 After 1881 the wealthiest families relocated to new houses in the modern part of the city. The medina fell into a state of neglect, with the exception of the area near the Great Mosque and the suqs which surround it. In 1967 the Mayor of Tunis promoted the foundation of Association de Sauvegarde de la Médina de Tunis which has promoted the restoration of several buildings, in particular in the northern part of the medina where most of the offices of the Ottoman administration were located. The blue colour of windows and doors is a very modern feature as it derives from the decoration of Ennajma Ezzahra (The Star of Venus), a palace built by French Baron d'Erlanger at Sidi Bou Said between 1912 and 1922.
Other quarters of the medina are still in a state of abandonment. 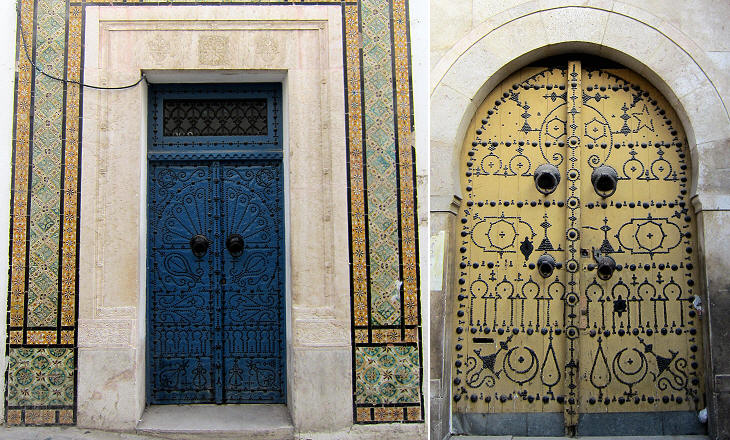 The image which can be seen in the background of this page shows the elaborate decoration of a house near Rue du Pacha.

Return to page one or move to:
Introductory Page
Bizerte
Kairouan
Mahdia
Monastir
Sfax
Sousse
and An Excursion to La Goulette and Sidi Bou-Said