- La Goulette and Sidi Bou-Said
(the Great Minaret at Kairouan)

A tram (aka streetcar) which leaves the centre of modern Tunis every fifteen minutes allows the inhabitants of the city to spend their Sundays having lunch at a La Goulette fish restaurant and then move on to sip a mint tea with pine nuts at a Sidi Bou-Said café. The fortress (aka Karraka, prison) and (right lower corner) a section of the walls which surrounded the town

La Goulette (from Italian gola, throat) is situated on the narrow passage between the sea and the lagoon of Tunis. A large (poorly maintained) fortress is a reminder of the fights which occurred in the XVIth century for the control of La Goulette which was a prerequisite for attacking Tunis.
In 1534 Hayruddin Barbarossa, leader of the corsairs of Algiers, intervened in a dynastic quarrel between two brothers of the Hafsid family ruling Tunisia and he conquered La Goulette and Tunis in the name of Ottoman Sultan Suleyman I who supported the expedition. One of his first decisions was to strengthen the existing fort, but in the following year the troops of Emperor Charles V seized it. The Spaniards moved on to conquer Tunis where they reinstated the Hafsid brother who had appealed to them for help. 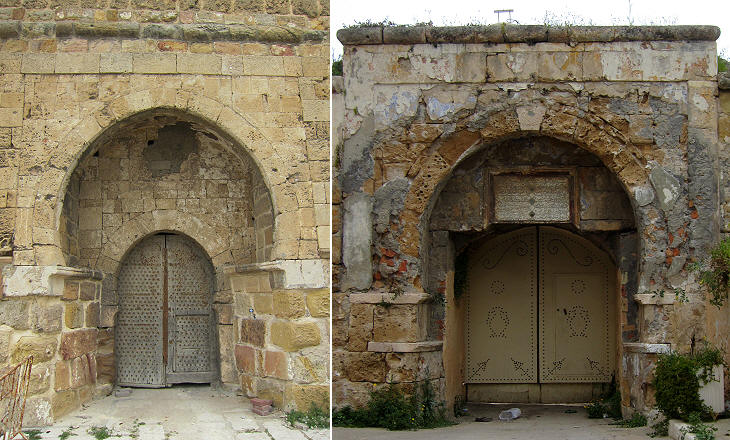 Gates of the fortress

The Spaniards redesigned the fortress (in 1535 and 1556) and placed a permanent garrison there. The Spanish commander of La Goulette played a significant role in the government of the country and this allowed Ottoman Sultan Selim II to charge the Hafsid rulers with being renegades. In 1574 an Ottoman army led by Koca Sinan Pacha landed near La Goulette and seized the fortress after a short siege. The expedition proved that the Ottoman fleet had entirely recovered from the 1571 defeat at Lepanto as it was able to carry 20,000 troops without being checked by the Spaniards who controlled Sicily or by the Knights of Malta. 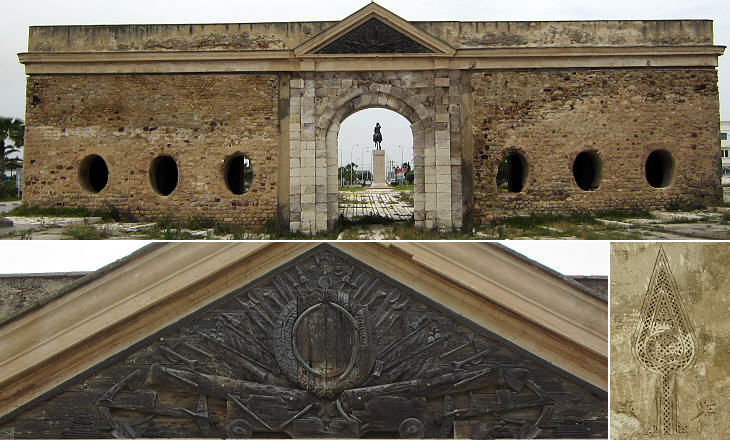 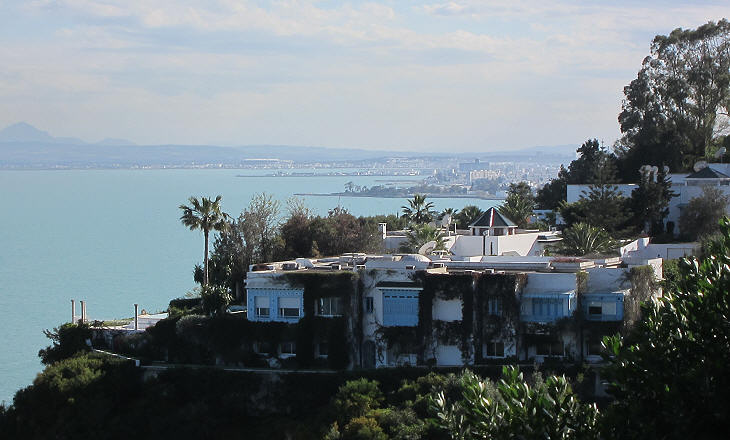 View of Carthage and Tunis from Sidi Bou-Said

From La Goulette the tram crosses Carthage, today an elegant suburb of Tunis and then it reaches Sidi Bou-Said which is positioned in a commanding position on the north-western coast of the Gulf of Tunis. The small town is named after Abou Said Khalafa, a XIIIth century hermit (sidi is the Muslim equivalent of saint). Baron Rodolphe dErlanger had a truly cosmopolitan background. He was born in France into a family of German origin. He had taken British nationality, but because the English weather did not suit his health he was advised to live in a sunnier country. He married in London, his Italian wifes parents being Italian (her father a count) and her mother American. In 1909 d'Erlanger fell in love with Sidi Bou-Said and in 1911 he decided to build a villa to which he gave the name of Ennejma Ezzahra (The Star of Venus).
In the 1930s Diana Vreeland  the fashion editor of Harper's Bazaar and editor-in-chief of Vogue  was living in London with her husband Reed. While there, they formed a cosmopolitan circle of friends, who would gather in exotic settings for house parties. The most memorable of these took place in 1931 at the sumptuous Tunisian home of Baron and Baroness dErlanger. Amongst the guests was famed interior designer and couture client, Elsie de Wolfe. The house, which had white domes and minarets, sat five hundred feet above the Mediterranean Sea, in the picturesque village of Sidi Bou Said. The old Baron was a French banker who had set up his business in London, and he and his wife were the parents of Diana and Reeds friends Leo and Edwina dErlanger. The guests would be greeted at a large marble terrace that stretched to the door of the palace. There were six servants to help with the countless pieces of luggage, piled high like the equipment of an explorers expedition. Diana recalled that only menservants waited on them wearing short blue jackets, fezzes, and the pale blue and white sashes of the house livery. In the marble hall an alabaster bowl, full of floating flowers, dripped water into a square pool that flowed away in a little canal to the outer courtyard, and smoking incense burners gave off the odor of amber. At dinner everyone sat on dark velvet covered banquets at a long table set with gilded goblets and fragrant bouquets of jasmine." Many of the guests wore oriental themed costumes designed by the likes of Vionnet and Lanvin (from the-polyglot.blogspot). 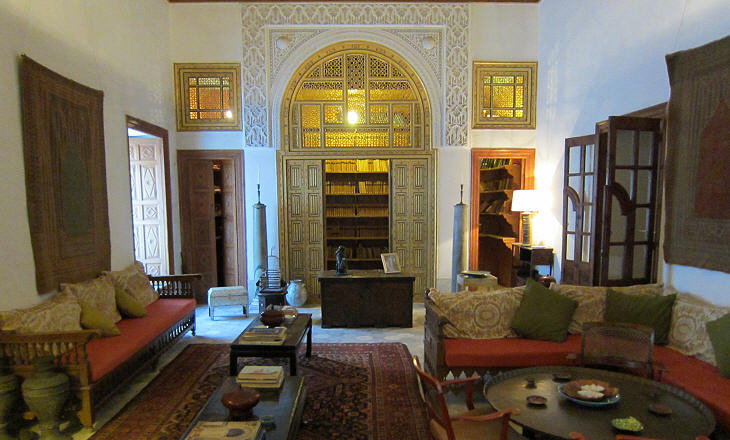 The villa was designed in an Andalusian style (adjusted to the needs of a comfortable European lifestyle). A particular aspect of the decoration is very interesting. Erlanger had the external frames of doors, windows and other architectural elements painted in blue, perhaps having in mind the houses of Paros, in Greece. Today this blue colour characterizes the whole of Tunisia.
Currently Ennejma Ezzahra houses the Centre of Arab and Mediterranean Music as Erlanger was a musicologist in addition to being a painter. 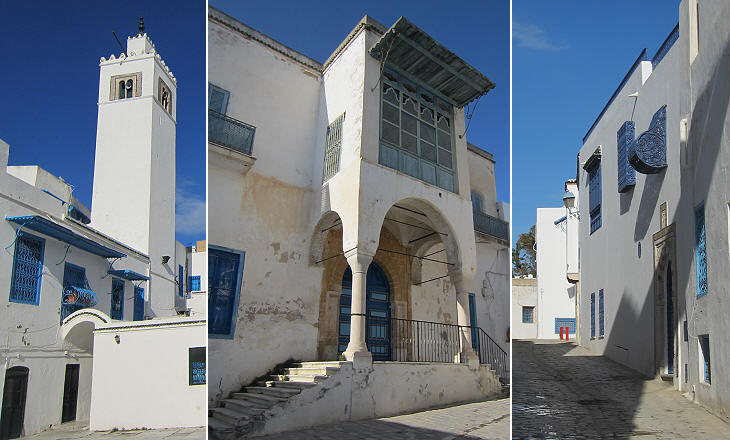 There are parts of Tunisia where landscape and traditional buildings have not been protected from real estate developers. Luckily at Sidi Bou-Said one can still understand why Erlanger fell in love with this location.