- Mahdia
(the Great Minaret at Kairouan)

You may wish to read an introduction to this section or a page on the ancient past of the town first.

This place is interesting to Englishmen as being the scene of the very first expedition against North Africa in which we took a part. It is thus described by Froissart and Holinshed: "In the thirteenth year of the reign of Richard II (1390) the Christians took in hand a journey against the Saracens of Barbary, through the suit of the Genoese, so that there went a great number of lords, knights, and gentlemen of France and England, the Duke of Bourbon being their general. Out of England there went John de Beaufort, bastard son to the Duke of Lancaster, also Sir John Russell, Sir John Butler, Sir John Harcourt, and others. They set forward in the latter end of the thirteenth year of the king's reign and came to Genoa, where they remained not very long, but that the galleys and other vessels of the Genoese were ready to pass them over into Barbary, and so about midsummer in the beginning of the fourteenth year of the king's reign, the whole army being embarked, sailed forth to the coast of Barbary, where, near to the city of Africa, they landed, at which instant the English archers stood all the company in good stead, with their long bows, beating back the enemy from the shore, which came down to resist their landing. After they had got to land they environed the city of Africa, called by the Moors Mehedia, with a strong siege, but at length, constrained by the intemperance of the scalding air in that hot country, breeding in the army sundry diseases, they fell to a composition on certain articles to be performed in behalf of the Saracens, and so, sixty-one days after their arrival, they returned home."
Murray Handbook for Travellers in Algeria and Tunis - 1895 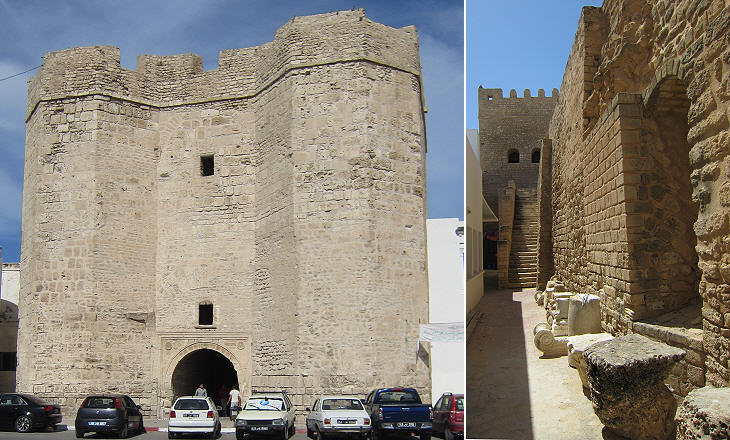 (left) Skifa el-Kahla (gate/fortress) built in the XVIth century; (right) a section of the walls

In the past, geographers called a short rocky promontory in Central Tunisia Cape Africa. In 916 Ubaid Allah al-Mahdi (the Chosen One) founded the capital of what eventually became the Fatimid Caliphate on the site of a previous Phoenician/Roman minor port at the tip of the promontory. The town was called al Mahidiya, but in Europe it was known as Africa or Aphrodisium.
When the Arabs founded their first capital in Tunisia in ca 670 they chose an inland location (Kairouan) as they were afraid of attacks by the Byzantine fleet. The foundation of Mahdia shows that having conquered Malta and Sicily the Arabs did not fear attacks from the sea any longer, but they were rather concerned about rebellions by the inland Berber tribes who had not completely accepted Arab supremacy. The narrow isthmus leading to the promontory was strongly fortified and it continued to be so through the centuries. 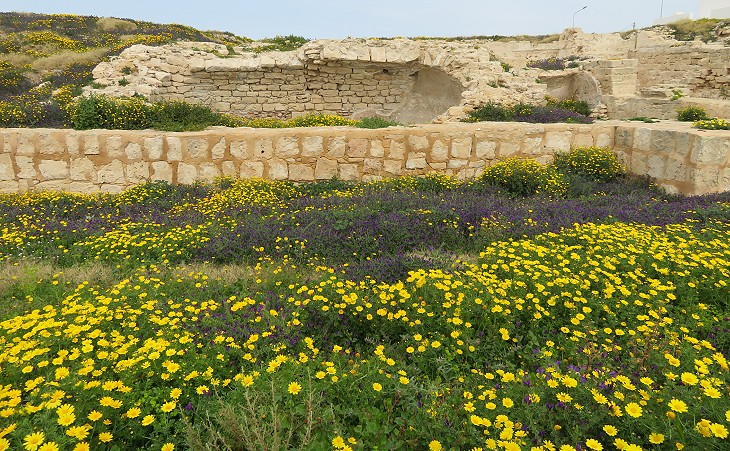 In ca 1068 Abou Obeid el-Bekri, an Arab geographer wrote "The arsenal is situated to the east of the palace of Ubaid Allah and it can house two hundred ships. It has two vaulted galleries which shelter the ships from sun and rain."
Free translation from Victor Guérin - Voyage archéologique dans la Régence de Tunis - 1862
The port of Mahdia was one of the bases from which Arab ships sailed to raid the coasts of Italy. Several expeditions were launched to expand Arab rule on the Italian peninsula, but attempts to permanently seize Reggio and Taranto failed. In 969 the Fatimids conquered Egypt and in 973 they moved their capital to Cairo. Mahdia gradually lost importance and so did its arsenal, also because of the scarcity of wood. 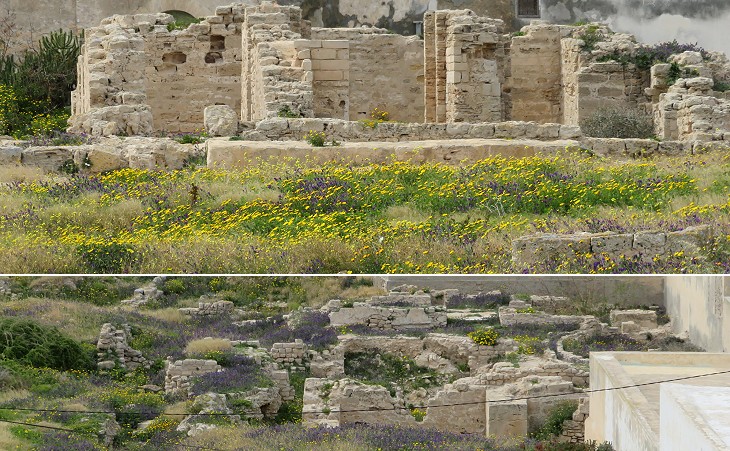 Other ruins behind the Arsenal, perhaps those of the Palace of Ubaid Allah

In 1087 the Italian maritime republics of Genoa, Pisa and Amalfi attacked and destroyed the fleet in the harbour of Mahdia putting an end to Arab supremacy on the western Mediterranean Sea. Mahdia, Sousse, Monastir and Sfax were conquered by the Normans in 1148, but their attempt to found a Christian kingdom on the coast of Tunisia failed in 1160. 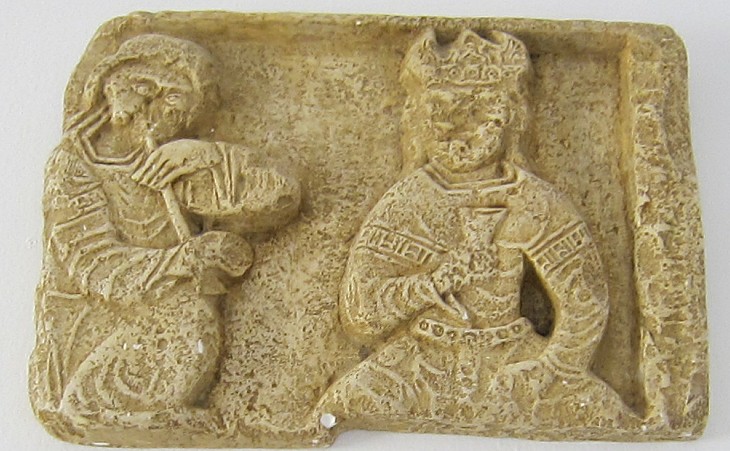 In 1390 Genoa called a crusade against the pirates of Mahdia in which French and English knights took part and which is described at the beginning of the page.
Not many yeeres ago Pedro de Navarra assailing this towne onely with nine ships, was defeated of his purpose, and constrained to returne with great losse of his men. This hapened in the yeere of our Lord 1519.
Leo Africanus - The history and description of Africa: and of the notable things therein contained - 1526 - 1600 translation by John Pory.
Pedro Navarro led the failed expedition on behalf of King Francis I of France. 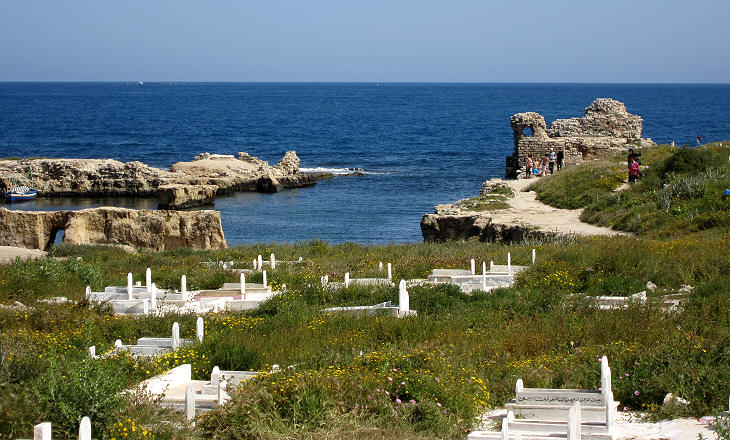 The old harbour (see it from a greater distance)

Its harbour is cut into the rock and it is large enough to house thirty ships; it is closed by a chain which is lifted between two towers at its entrance. Guérin citing El-Bekri
Today it is difficult to believe that the threat to the Italian coastal towns originated from this small harbour cut by the Phoenicians into the rocks of the promontory (you may wish to see the ports of Carthage). The Arabs protected the access to it by two towers and by a chain between them; it was broken by the Italian assailants in 1087 thus allowing them to set the Arab fleet on fire and seize the town. The use of a chain as a defence for a harbour was introduced in 718 at Constantinople to protect the Golden Horn. 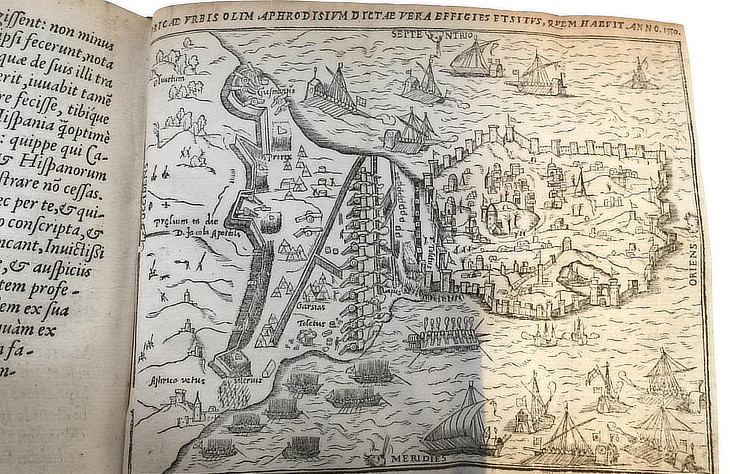 Starting from 1535 Emperor Charles V was involved in supporting a local dynasty against Hayruddin Barbarossa and other corsairs who in turn were supported by the Ottoman Sultan. European engravings depicting the siege and seizure of Mahdia in 1550 by the Spaniards show that the whole promontory was surrounded by walls and that the area near Cape Africa was populated. The conquest of Mahdia was heralded as a great victory and the Viceroy of Sicily celebrated it in a monumental gate at Palermo. 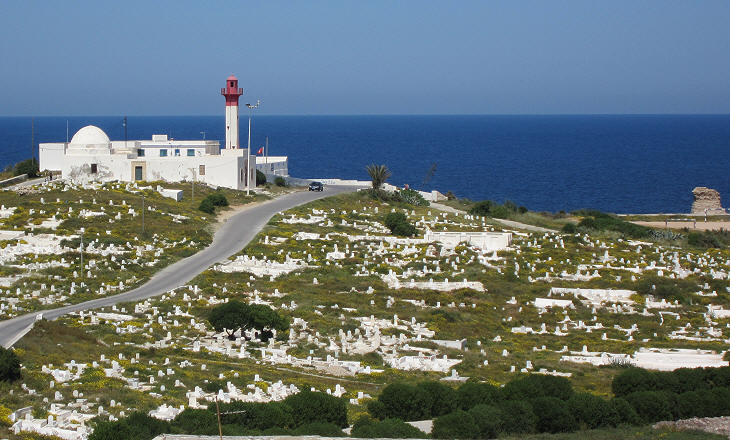 Cemetery and lighthouse at Cape Africa

The 1550 siege and the following one in 1554 at the end of which the Spaniards abandoned Mahdia caused the decline of the town. The remaining inhabitants settled in the area of the isthmus and the tip of Cape Africa became the site of a large cemetery.

A solitary with the shepherd's smile
I pasture long my sheep, my mysteries,
My snow-white flock of undisturbed graves!
(..)
The dead lie easy, hidden in earth where they
Are warmed and have their mysteries burnt away. 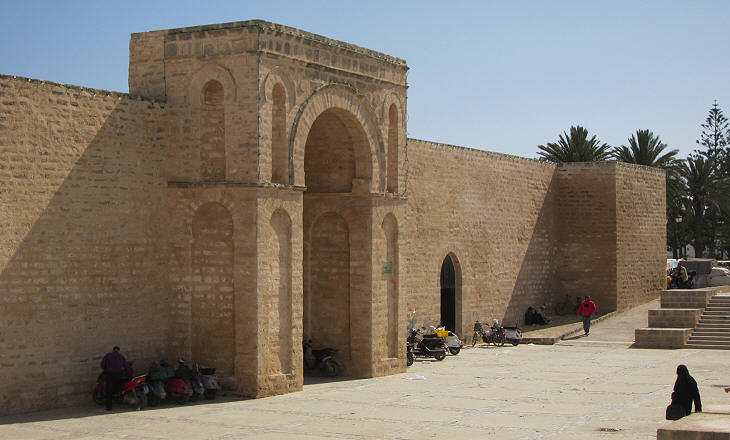 The Great Mosque was built on ground taken from the sea. It is made of seven aisles, it is very fine and solidly built. Guérin citing El-Bekri
The Kings of Spain had the title of Rex Catholicus and their allegiance to the Catholic Faith impaired their ability to deal with their Muslim (and Protestant) subjects and to firmly establish their rule over the many towns of Tunisia that their warships and their armies conquered. At Mahdia the Xth century Great Mosque was turned into a church and its courtyard into a Christian graveyard. When eventually the Spaniards were forced out of Mahdia they destroyed it together with other important historical buildings. In the 1960s the mosque was rebuilt, but only the great portal and the towers flanking the façade are in part original. 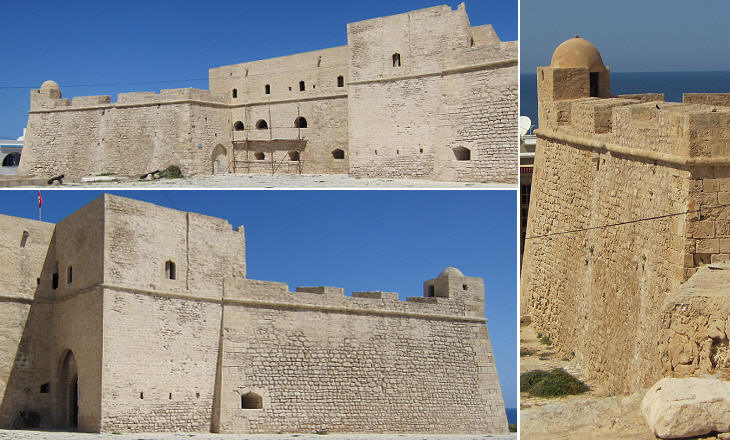 The dark and frowning masses of the old Spanish (!) battlements and towers, their rugged outlines starting forth from the smooth back-ground of a clear and moon-light sky, contrasted well with the modern and glittering white Moorish forts on which the lunar rays threw their soft and delicate light, and formed a most lovely scene.
Sir Grenville Temple - Excursions in the Mediterranean - 1835 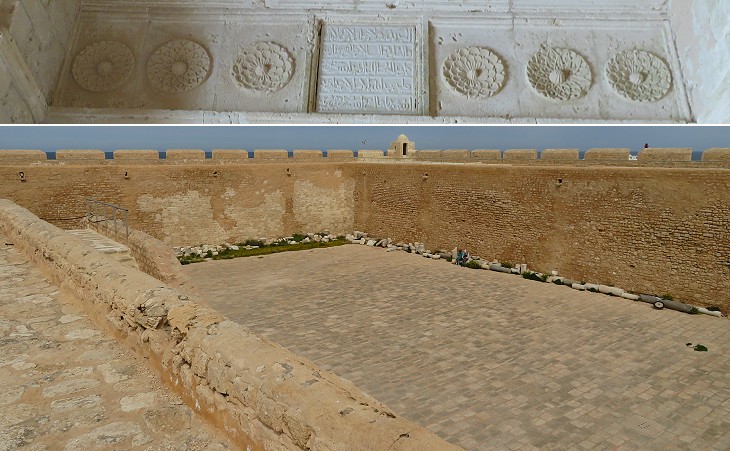 Borj el-Kebir: (above) inscription over the inner entrance; (below) interior with many ancient Roman columns

In the late XVIth century the Ottomans built a fortress at the eastern end of the reduced populated area of Mahdia. In the XVIIIth century it was strengthened by additional bastions in fear of attacks by European fleets as retaliation for the piratical activities which continued to be launched from Tunisian ports. The image used as background for this page shows an old gun at Borj el-Kebir. 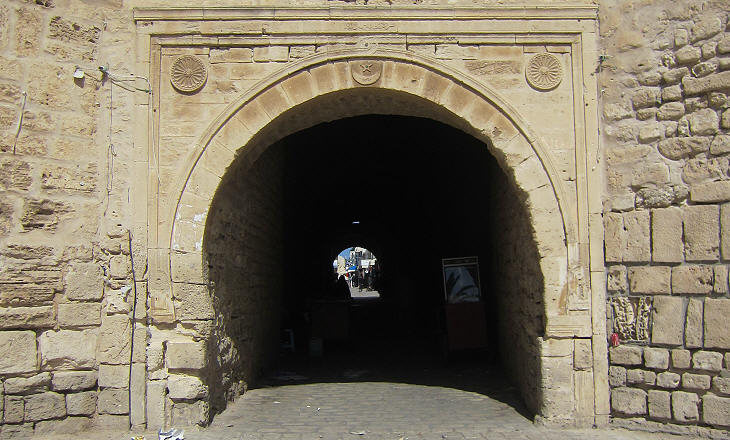 Skifa el-Kahla or Gate of the Shade or Sad Gate. The passage was closed by seven heavy gates

From Thapsus we galloped on, as evening was fast closing in, for the distance of nine miles to Mahadeah, whose gates were on our arrival already shut. This, however, was a matter of small consequence, as the numerous breaches in the walls afforded us the choice of a variety of entrances. Temple
This place has risen from its ruins in a remarkable manner since the French occupation (in 1881); the old and dilapidated ramparts have been pulled down, and their material used for the breakwater of the harbour. Murray Handbook
Only Skifa el-Kahla and a very short section of the adjoining walls were spared. 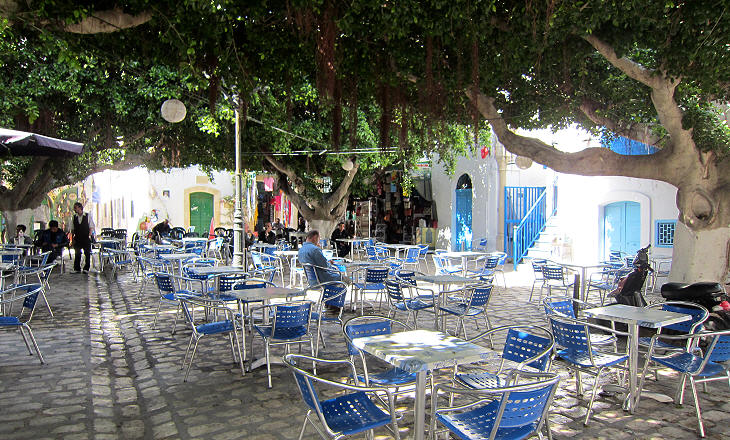 We remained a long time riding through the different streets in search of lodgings, the fondooks or inns being too dirty to induce me to take up my quarters in them. At last, a kind Moor, by name Sidi Haji Muhammed, lent me one of his houses during my stay, which was very clean and comfortable, being provided with beds. (..) The town is at present a wretched place, without shops or bazaars, and cannot, I think, contain above three thousand inhabitants. Temple
The Arab quarter, on the N. of the promontory, remains untouched. Murray Handbook
The touristic development of the coast adjoining Mahdia has made the old town a venue for shopping, especially in the area near Skifa el-Kahla. One must walk towards the tip of the promontory to find some more evocative spots. 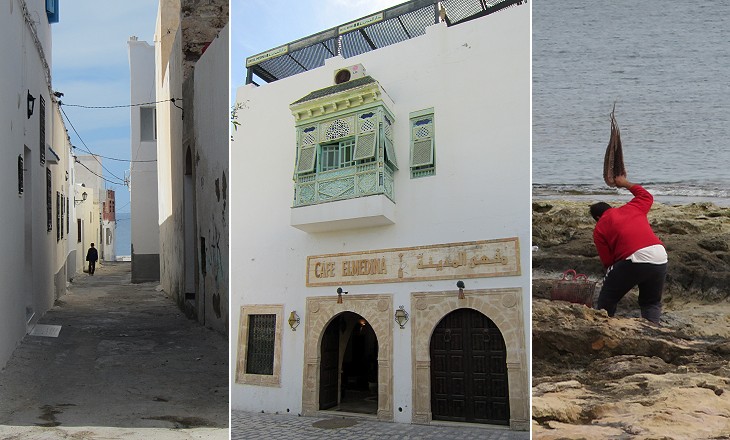 Move to a page on the ancient past of the town or to:
Introductory Page
Bizerte
Kairouan
Monastir
Sfax
Sousse
Tunis
and An Excursion to La Goulette and Sidi Bou-Said