Page revised in September 2019. The locations covered in this section were visited in April 2012 and March 2019.

- Introduction
(the Great Minaret at Kairouan)

In 146 BC, at the end of the Third Punic War, the Romans destroyed Carthage and established their first province on the southern shore of the Mediterranean Sea; it was called Africa, a name the etymology of which is uncertain, but which probably meant Land of the Afri, a term indicating the native tribes who lived there prior to the arrival of the Phoenicians who founded Carthage and other towns along the coast.
The new province included only the north-eastern part of today's Tunisia and its capital was Utica, a town the inhabitants of which had helped the Romans to defeat the Carthaginians. In 105 BC the province was enlarged after the Romans defeated Jugurtha, King of Numidia and it included the whole of Tunisia, parts of Algeria and Tripolis (three cities) in today's Libya.
You may wish to see a section on the Roman towns of Tunisia. 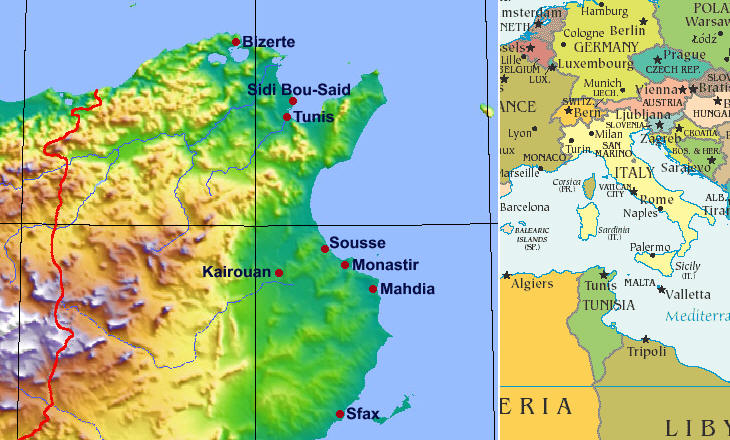 Clickable map of the towns (red dots) covered in this section. The red line indicates the current border between Algeria (left) and Tunisia (right)

The borders of today's Republic of Tunisia are to a large extent those established by the Ottoman Empire towards the end of the XVIth century when they partitioned the Viceroyalty of Algiers into the three pachalik of Algiers, Tunis and Tripoli which were headed by pachas (governors) appointed by the Sultan. The pachalik of Tunis was also known as Ifriqiya, a corruption of the name of the Roman province. 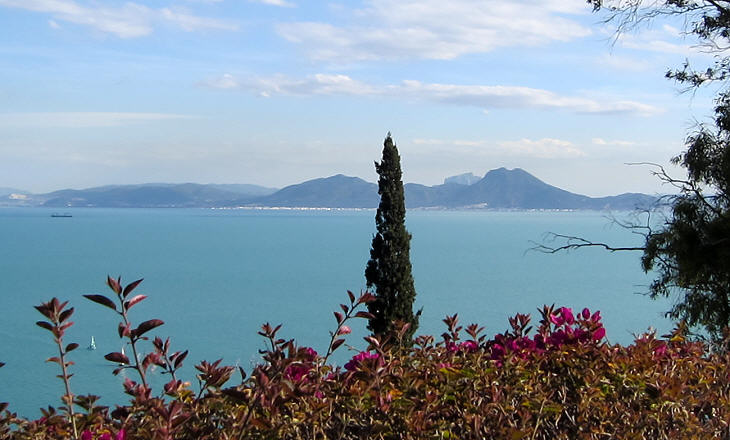 The Gulf of Tunis seen from Sidi Bou-Said

Tunisia is a member of the Organisation of African Unity, its national soccer team plays in the African Championship and the country is by all means listed as an African one, yet its history and culture are more linked to its being located at the centre of the Mediterranean Sea, than to the continent to which it belongs. Its coasts attracted Phoenician seamen and its inland fertile valleys Roman settlers. The VIIth century Arab conquest of Ifriqiya and of other countries lead to a split of the Mediterranean region, but notwithstanding the recurring state of war between Muslim and Christian nations, trade and cultural exchanges continued between the southern and the northern shores of the Mediterranean Sea. 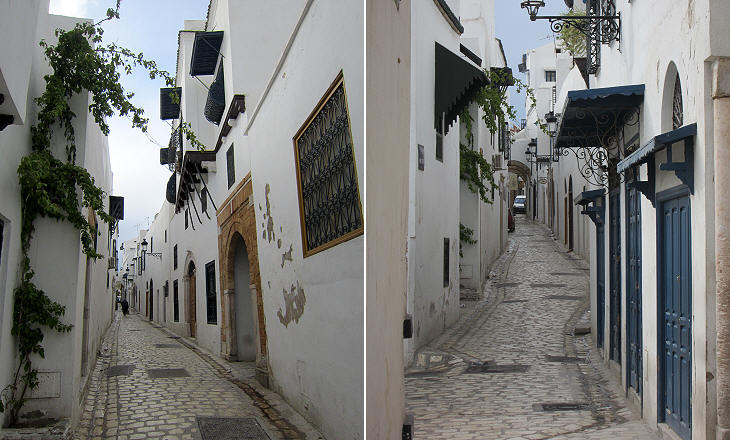 All the main towns of Tunisia are situated along the coast and existed in antiquity with the exception of Kairouan which was founded by the Arabs in the VIIth century on purpose at some distance from the coast for fear of attacks by the Byzantine fleet. Many towns are of Phoenician origin, but according to tradition it was the king of Tunis who gave Queen Dido the land where she founded Carthage. 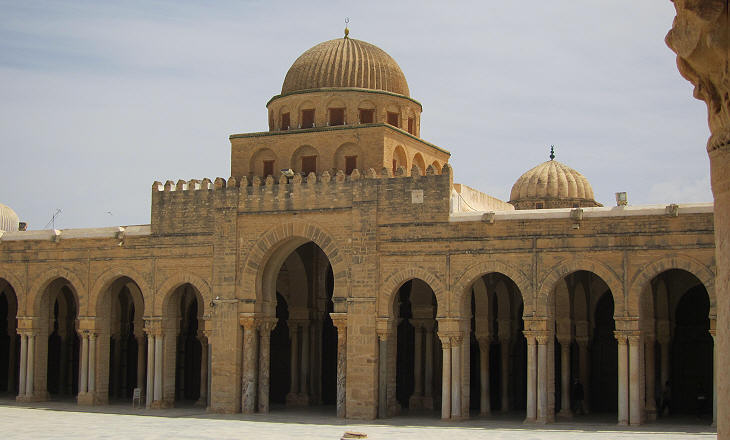 The Arab conquest of Tunisia was not an easy one; the Byzantines were not able to defend it, but local tribes opposed a fierce resistance. The construction of the Great Mosque of Kairouan in the IXth century marked the pacification of the country by an autonomous emirate founded in 800 by Ibrahim I ibn al-Aghlab. The Aghlabids ruled Tunisia for more than a century, they conquered Sicily and in 846 they sacked the outskirts of Rome, including S. Pietro. 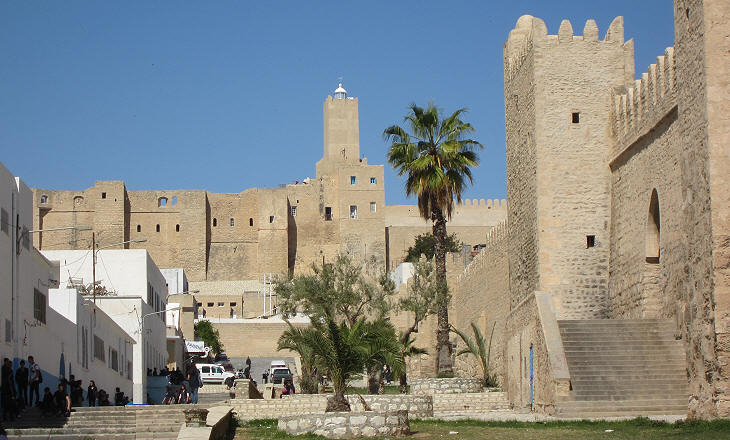 Arabic medina means walled town. The history of Tunisia is marked by a long series of conflicts and all its historical towns are protected by walls. Garrisons were quartered in a kasbah, a citadel where usually the governor of the town had his residence. Sousse retains the most imposing kasbah; in other locations the kasbah is lost (e.g. Tunis) or it has become a quarter of the town (e.g. Bizerte) or it houses a luxury hotel (e.g. Kairouan). 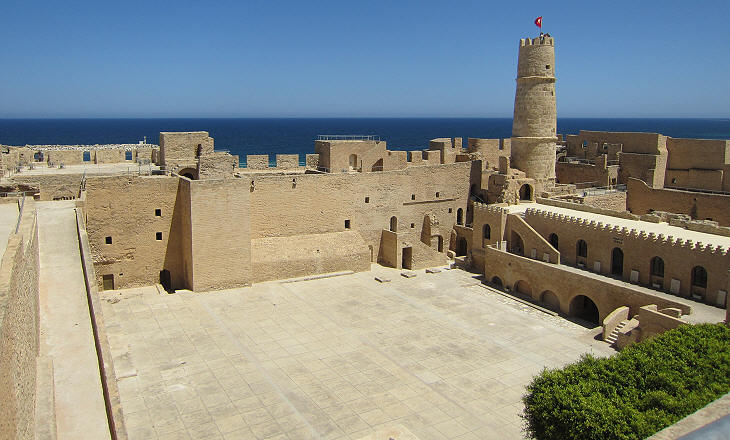 Arabic ribat means a fortified enclosure for religious warriors and/or a hospice for pilgrims. They were initially built at the entrances to harbours to protect them from the Byzantines, then they became hostels for pilgrims en route to Egypt and Mecca (by sea, because the journey by land was very long). The ribat were probably taken as a model by the Knights Hospitallers when they built their fortresses during the Crusades. 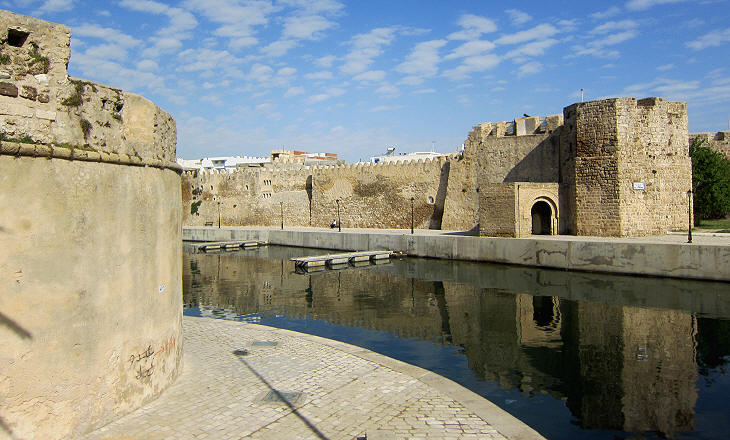 Bizerte - Sidi El-Hani, a small fortress (left), and Kasbah (right) at the entrance to the harbour

In some locations walls and kasbah were upgraded in the XVIth century when the towns of Tunisia were threatened by raids from the Spaniards and the Knights of Malta; the latter threat continued until the XVIIIth century. In addition several European nations sent their fleets (e.g. Admiral Robert Blake in 1655) in punitive raids to Tunis to retaliate for the capture of mercantile ships. 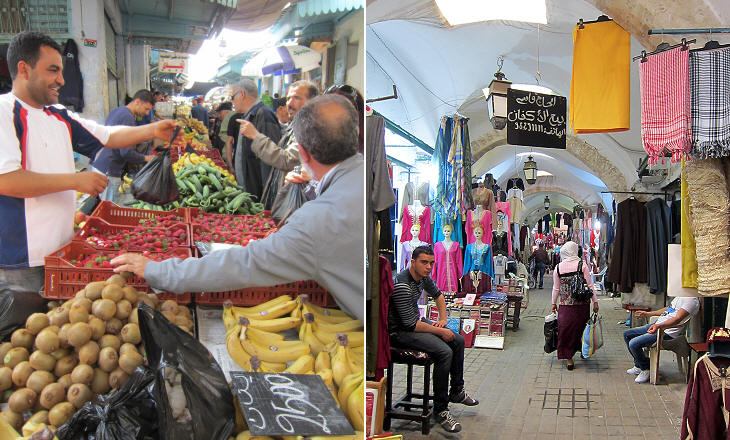 In 1881 France imposed its protectorate over Tunisia and in the following years French authorities started the development of new modern quarters outside the walls of the main towns. Today these quarters are the centre of these towns and they house government offices and department stores. At Tunis, Sousse, Kairouan, Mahdia and Monastir the old bazaars mainly cater for tourists and holidaymakers, with a high number of carpet and souvenir shops. Sfax and Bizerte retain more interesting bazaars especially in the section where food is sold.

The image used as background for this page shows the domes of the Great Mosque at Kairouan.