Page revised in February 2019. The locations covered in this section were visited in April 2012.

- Bizerte
(the Great Minaret at Kairouan)

Est in Africa Hipponensis colonia mari proxima. Adjacet navigabile stagnum; ex hoc in modum fluminis aestuarium emergit, quod vice alterna, prout aestus aut repressit aut impulit, nunc infertur mari, nunc redditur stagno.
Pliny the Younger Ep. XXXIII ad Caninium
The lake upon which Bizerta is situated has an open communication with the sea and according to an observation of the younger Pliny is either continually receiving a brisk stream from the sea or else discharging one into it.
Thomas Shaw - Travels or Observations relating to several parts of Barbary and the Levant - 1738 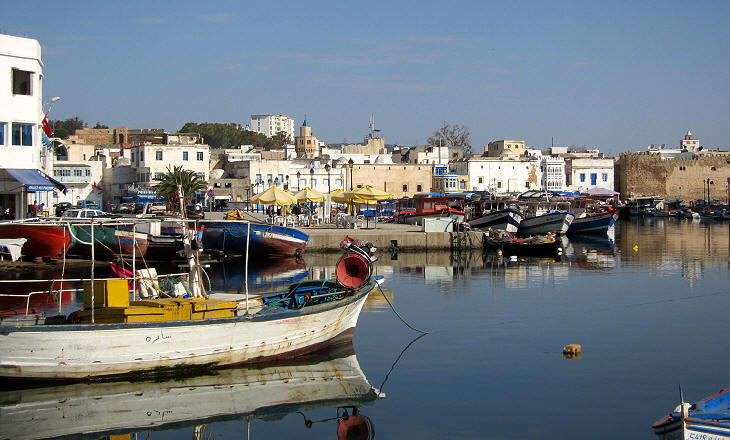 View of the old harbour: the Fort of Spain is on the hill to the left and the kasbah to the far right

Owing to its favourable position on the northern coast of today' Tunisia, Bizerte was a Phoenician port and eventually a Roman colony (Colonia Iulia Hippo Diarrhytus or Zarrhytus). Its current name is said to derive from an Arabic word meaning encampment, but it might be a corruption of the ancient Roman name. The aspect of the old town is characterized by fortifications built in the XVIth and XVIIth centuries. 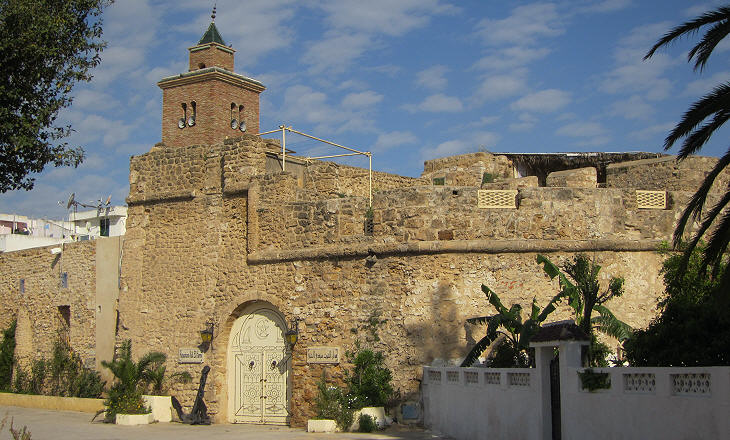 Sidi El-Hani, a small fortress opposite the kasbah with which it controlled the access to the harbour (see image in the introductory page)

At the beginning of the XVIth century Bizerte was part of the Hafsid Kingdom which included today's Tunisia and western Algeria. In 1526 a dynastic quarrel led one of the claimants to the throne to seek the help of Hayruddin Barbarossa, leader of the corsairs of Algiers.
Barbarossa went to Constantinople to obtain political and military support from Ottoman Sultan Suleyman I and in 1534 he conquered Bizerte and Tunis in the Sultan's name. 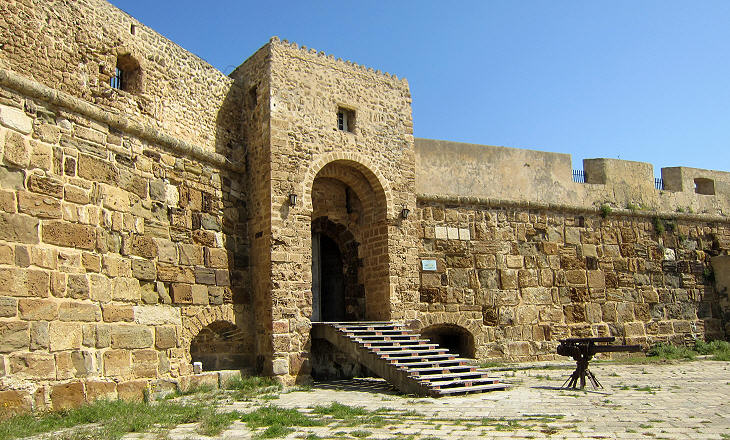 The dethroned Hafsid king sought the help of Emperor Charles V who in the following year dislodged Barbarossa from Bizerte and Tunis and reinstated the Hafsid king who became a puppet in the hands of the Spaniards. The Spaniards retained control of Bizerte (and Tunis) until 1574 and a fortress on a hill west of the town is named after them, although it is mainly an Ottoman fortress. Today it houses a large open air theatre. 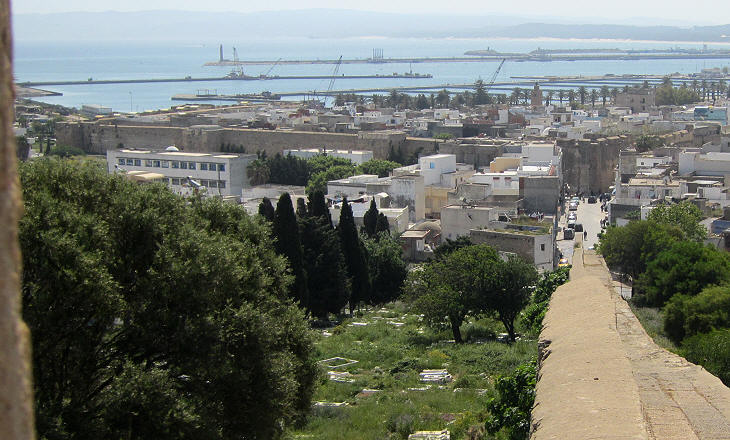 View of the kasbah from the Fort of Spain

Bizerte being situated opposite Sardinia provided Barbary corsairs with an excellent base from which they assaulted ships moving across the Mediterranean Sea. These acts led to the reaction of European powers; the fleets of France, England and Venice bombarded Bizerte several times as a retaliation for piracy. In addition to the Fort of Spain a kasbah, a fortress adjoining the city walls, was built at the entrance to the harbour. 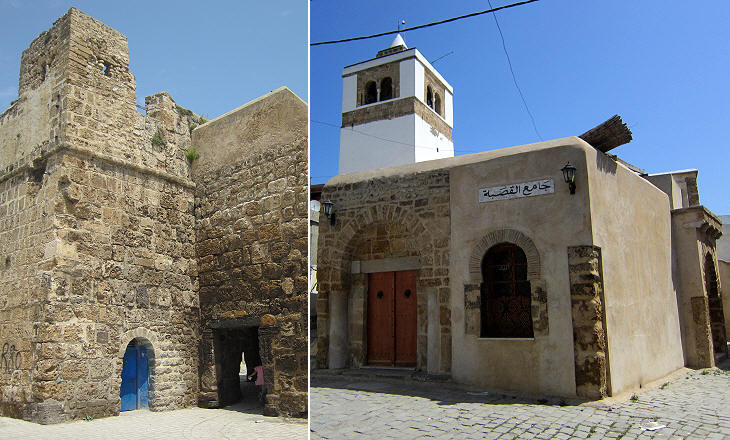 (left) The only entrance to the kasbah; (right) Kasbah Mosque

In 1818 the rulers of Tunisia gave up piracy and Bizerte lost its main source of revenue. The inhabitants (5,000 ca) lived off the lake which provided plenty of fish (and many doors of the town are decorated with nails making up a fish, as in the image used as background for this page). Coral fisheries near the town were let to French, Neapolitan, Sicilian and Maltese companies which employed some local labour. 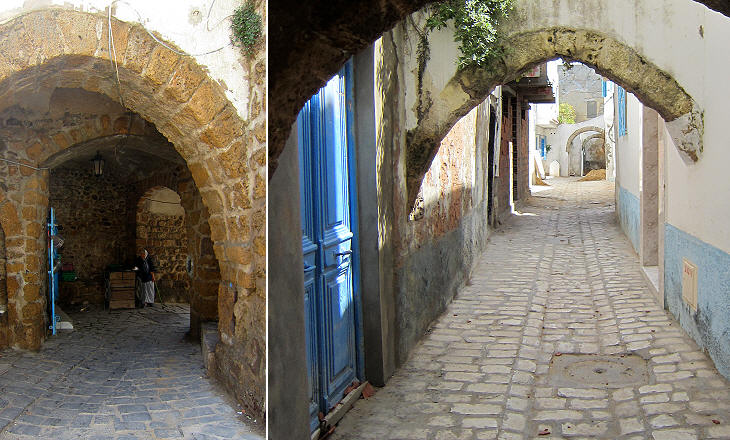 In 1881 France imposed its protectorate over Tunisia and the French soon started the construction of a new (military) harbour inside the lake to replace the old one which was almost silted. Museum of Bardo in Tunis: early Vth century AD floor mosaic of Roman baths depicting fishermen which was found during the construction of a new arsenal

The 1895 Murray Handbook for travellers in Tunisia and Algeria envisaged the future of Bizerte as a new Malta:
The finest harbour and the most important strategic position in the Mediterranean. A glance at the map of the Mediterranean will show what a commanding position it occupies, projecting like a sentinel in the central part of that sea. This place is so exceptionally interesting and so likely to play an important part in the naval history of the future, that the traveller to Tunis is strongly advised to land here and to proceed to his destination by railway. There can be little doubt that within a short time it will be ready to receive a French squadron, and that all the various establishments will be constructed necessary for a naval port, while the heights around the town will be so fortified as to make the place impregnable.
As a result the kasbah was no longer utilized as a fortification and it became an addition to the old town. It still retains a maze of narrow dead end streets inside its walls. 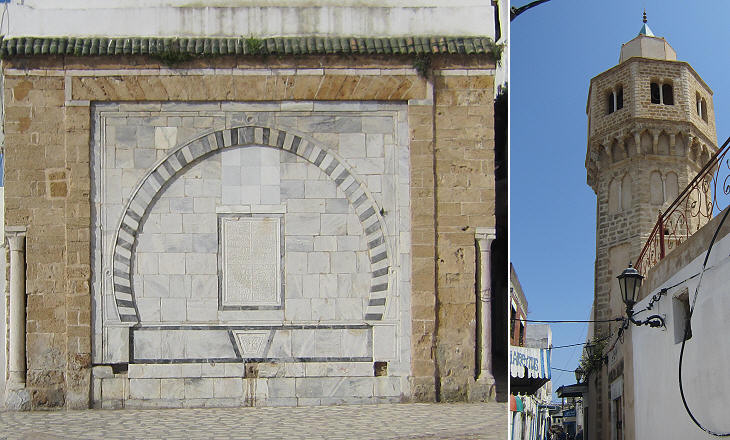 The French built a modern town to the east of the old one and they opened some streets between the two. In 1956 Tunisia was granted full sovereignty, but France kept control of the naval base of Bizerte until 1963.
Today the old medina retains its traditional bazaar, but it is no longer the heart of the town and its buildings are rather run down. 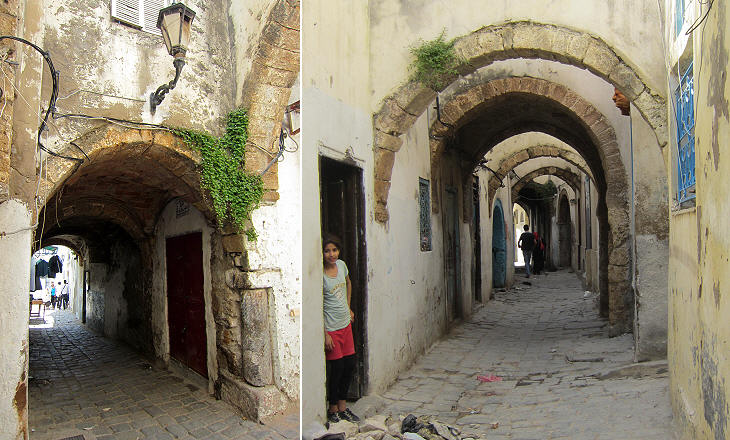 Streets of the medina