You may wish to see an introduction to this section or a page on the Upper Town first. 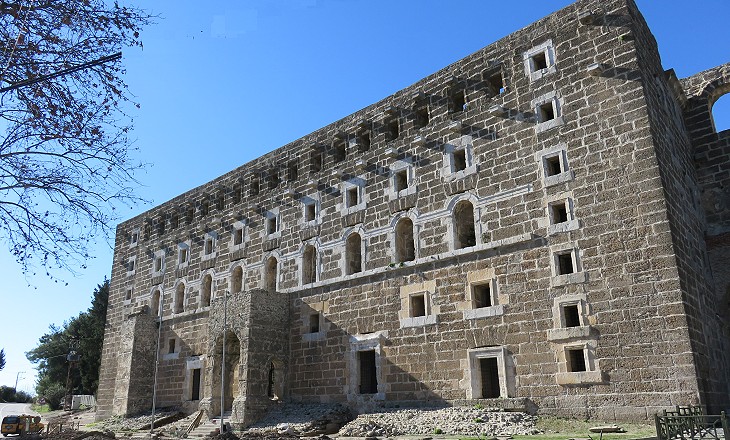 On the east side of the hill is a theatre, highly interesting from being in so excellent a state of preservation; but the architecture, particularly of the exterior, is in the worst taste. It resembles a large factory, from the number of square niches in the walls of its proscenium.
Charles Fellows - Journal Written during an Excursion in Asia Minor in 1838 Theatre seen from the upper town

From the Republic of Turkey - Ministry of Culture and Tourism web site page on Aspendos:
In the 1930s Mustafa Kemal Atatürk visited Aspendos. After the inspection of the theatre the first President of the Turkish Republic stated that such a magnificent structure must not be wasted. He ordered its renovation that stirred many controversies among historians and architects. Since then the theatre is used as a venue for various cultural events, including an International Ballet and Opera Festival. Performances usually take place in late spring and early summer.
Usually the theatre of Aspendos is very crowded and this occurs not only during the theatrical season. From April to November it is the only monument of the town which is visited by daily excursionists from seaside resorts near Antalya. Their tours include other archaeological sites (e.g. Perge and Side), so they do not spend much time at Aspendos. I visited the theatre on January 8, 2015 in order to have it all to myself. 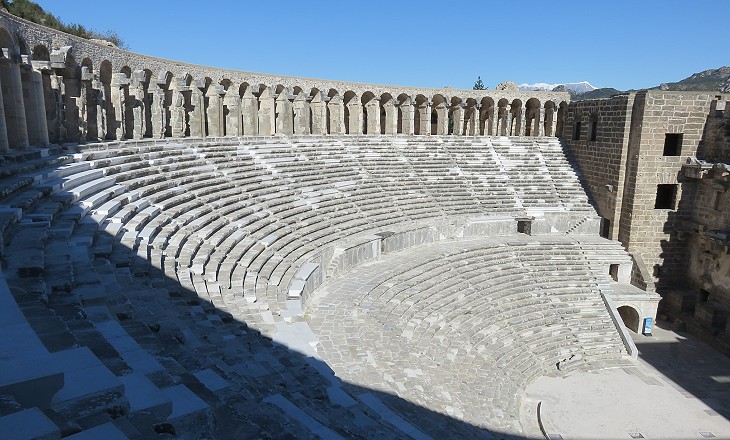 The remains of the inside of this theatre are far the most perfect of the kind that I have seen; indeed, the whole might be now used for its original purpose. (..) The seats remain almost perfect, as well as the lobbies and galleries leading to them. (..) Around the top of the back seats of the theatre is a series of arches, which spring from ornamental circular brick columns, plastered over. The whole of the seats and steps, the floor of the area, together with the side doorways, and the lobbies and apartments to which they lead, are quite perfect. Fellows
The theatre could house an audience of 8,000. 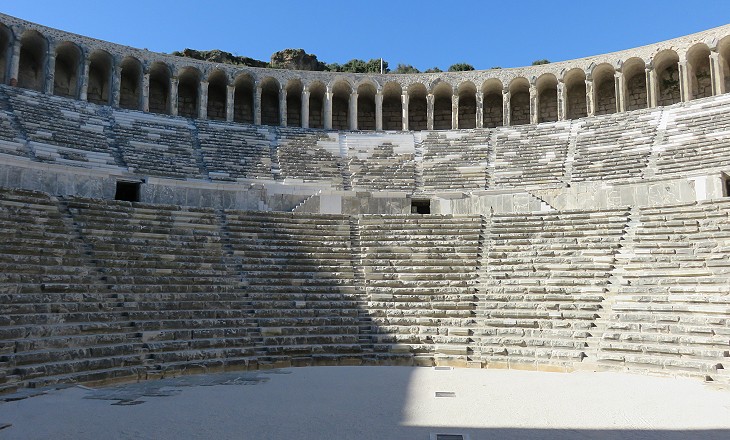 Over each of the entrances in the front are long inscriptions, but the sun shone so strongly upon them, and they were so high up, that I could not see to copy them. Fellows
The theatre was built during the reign of Emperor Marcus Aurelius by two rich brothers (Crispinus and Auspicatus Curtius), as stated in the inscriptions which mention also the name of the architect (Zeno from Aspendos).
You may wish to see some other Roman theatres at Orange (France), Amman (Jordan), Bosra (Syria), Sabratha (Libya) in addition to those covered in this section. In general the seats of a Roman theatre were grouped in three sections, whereas at Aspendos the sections were two. 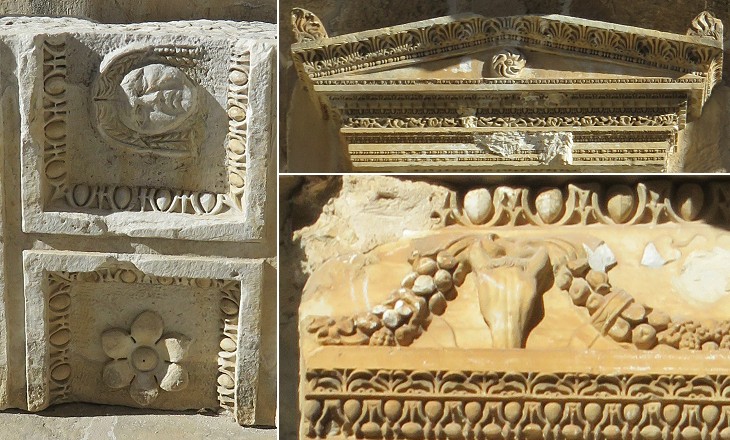 Theatre: details of the decoration

The proscenium is very richly ornamented with niches, all of the most elaborate designs in white marble; the ornaments are heads, masks, dolphins, flowers, and various animals. Fellows 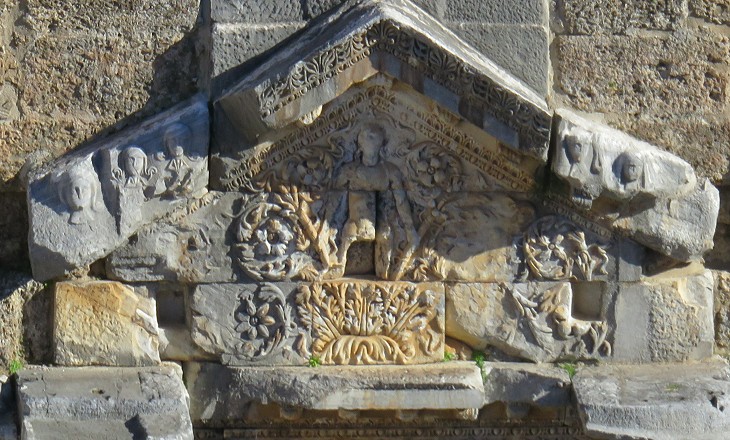 The current decoration is partly the result of a reconstruction which is not always entirely convincing. In the central relief two elements portraying heads do not match the rest of the decorative patterns. 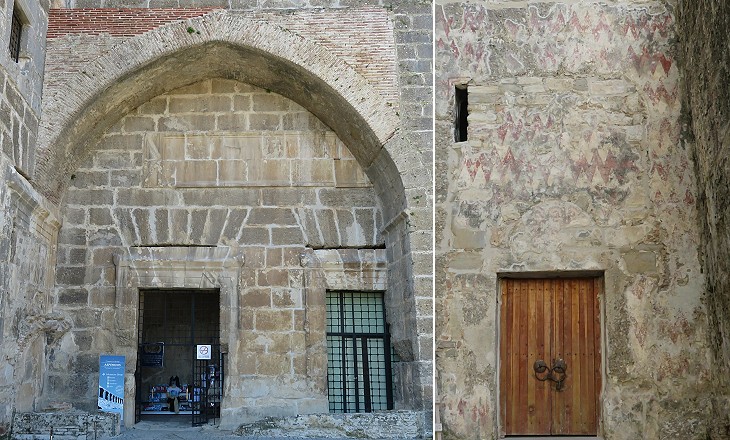 Theatre: (left) Seljuk arch and Latin inscription inside it; (right) traces of painting on the side wall of the stage

The walls of the proscenium and sides of the theatre have been coloured, and still retain a common red pattern upon the white plaster marked out by black lines in a zigzag form. Fellows
The preservation of the theatre was helped by arches and a buttress built by the Seljuk rulers of the region when they turned it into a summer residence and eventually into a caravanserai (ca XIIth century). The geometrical paintings on the side wall of the stage belong to that period; they can be noticed also at Alanya. Fellows mistook the long agora and the nymphaeum at its end of the Upper Town for a stadium. Archaeologists actually uncovered a stadium or more likely a circus for chariot races at the eastern foot of the hill. It is dated approximately the same period as the theatre. You may wish to see the impressive stadium of Afrodisia. 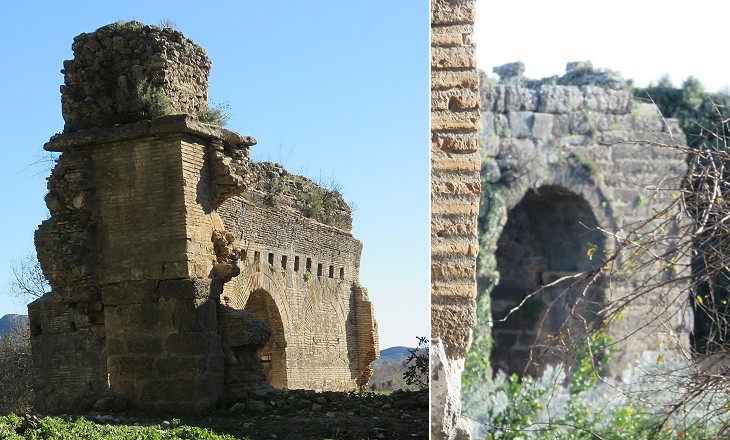 The archaeological area does not include all the ancient buildings of Aspendos. Some of them are inside private properties. Based on the thickness of their walls they were most likely baths with adjoining gymnasiums.
The image used as background for this page is based on a series of arches in the gallery of the theatre.
Return to page one - the Upper Town.