- Alanya - A Walk to the Upper Town
(Kizkalesi) 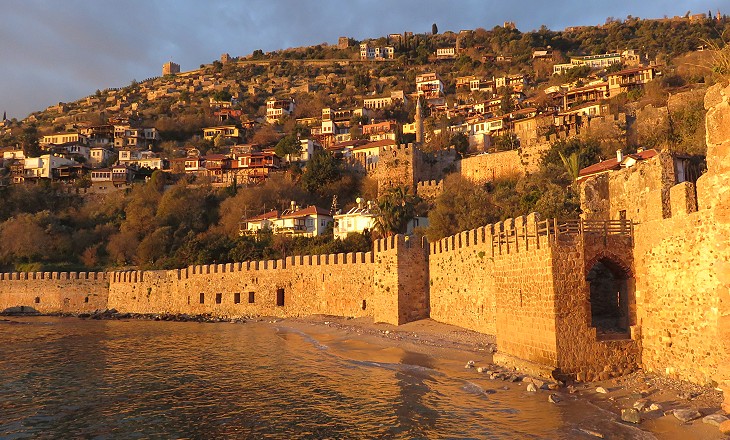 Maritime walls and the Lower and Upper Towns

Every thing within the walls, the Mehkemeh (City Council) with apparent cordiality proposed to shew us. In consequence of this invitation, a large party of officers, accompanied by a guide furnished by the government, set out the following day to walk up the hill, the only access to which was through the town. (..) The eastern side of the promontory, on which the town is placed, is so steep that the houses seem to rest on each other.
Francis Beaufort, Captain of HMS Frederikssteen, a frigate of 32 guns: Karamania; or a brief description of the South Coast of Asia Minor, and of the Remains of Antiquity collected during a survey of that coast, under the orders of the Lords Commissioners of the Admiralty, in the years 1811 & 1812 - Published in 1817 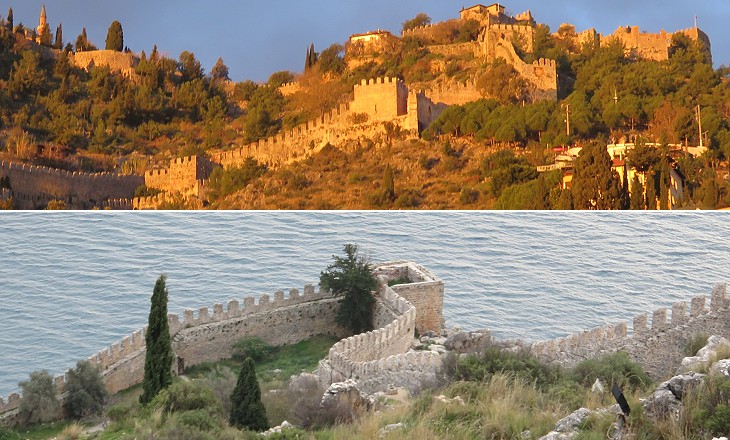 (above) Walls linking Kizil Kule to Ehmedek Kale in the Upper Town; (below) walls on the outer side of the headland

The numerous walls and towers prove how anxiously its former possessors laboured to make the promontory an impregnable fortress. Beaufort
On the headland the Seljuks built an impressive fortification system made of long stretches of walls, towers and castles. The Upper Town was surrounded by three curtain walls with over 100 towers and it contained two castles which could be independently defended. 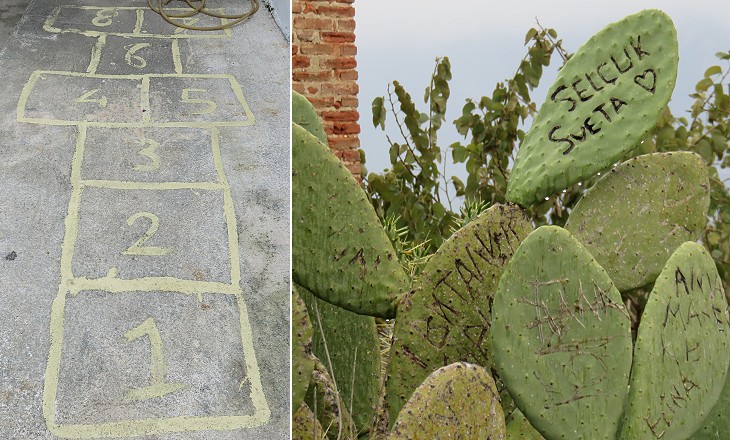 Games and love in the Upper Town

The party had not advanced far, when a rabble of boys, the sure forerunners of a tumult in Turkey, began to collect: the low murmur of Ghiaoor, or Infidel was first heard; a few stones were then thrown; and at length, the guide became so alarmed, that the officers consented, at his entreaty, to turn back: the signal was made for a boat, and they embarked. Beaufort
I daresay that today the very few boys living in the Upper Town have more peaceful pastimes. Hopscotch in Turkey is called seksek, sek meaning to jump on one foot. 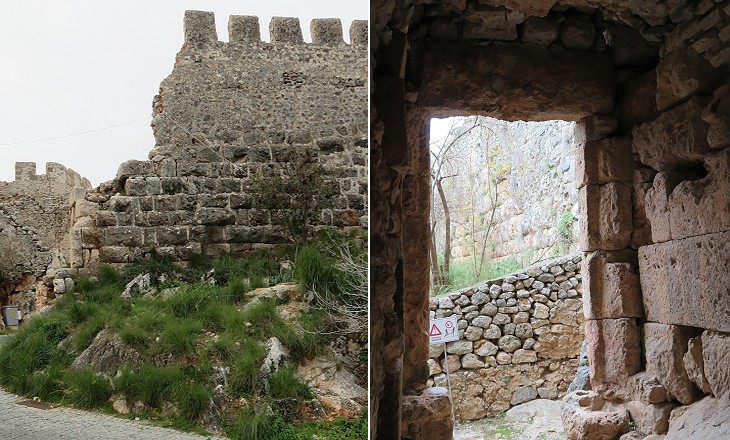 A severe remonstrance was therefore sent to the Mehkemeh; (..) they assured me that several of the mob had been already seized and bastinadoed. (..) Whether this was strictly true, or not, it was enough; (..) I professed my self satisfied; and the officers proceeded up the hill without any farther molestation. The remains of a Cyclopian wall and a few broken columns, were the only vestiges of antiquity which they discovered. Beaufort
The two remains of ancient fortifications shown above are at the opposite ends of the relatively flat and large area at the top of the headland. They indicate that a large settlement existed in antiquity. You may wish to see the cyclopean walls of Alatri near Rome. 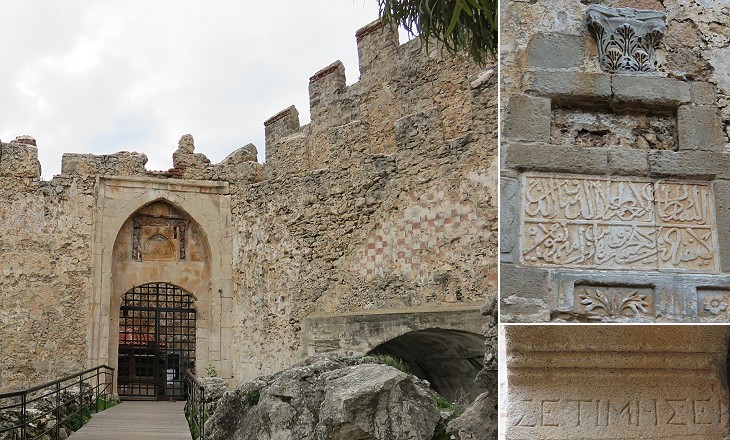 (left) Ortakapi (Middle Gate) with traces of red and white painting made by the Seljuks, similar to those at the theatre/Seljuk palace of Aspendos; (right-above) inscription celebrating Sultan Kaykobat I Ala ad-Din; (right-below) fragment of a Greek inscription

There were no Greek inscriptions, but two lines in Arabic were found over the land-gate; they are surmounted by a small Corinthian capital and by some prettily carved festoons of flowers. Beaufort
Ortakapi is a rather imposing gate when considering it is just an entrance to the Upper Town from the Lower one.
Ibn Battuta, whose travel accounts through most of the Muslim countries are a treasure trove of information for historians, visited Alanya in 1330 or 1332: At Ladhiqiya (in Syria) we embarked on a large galley belonging to the Genoese, the master of which was called Martalmin, and set out for the country of the Turks known as Bilad ar-Rum [Anatolia] (..) We were ten nights at sea, and the Christian treated us kindly and took no passage money from us. On the tenth we reached Alaya where the province begins. This country is one of the best in the world; in it God has united the good features dispersed throughout other lands. Its people are the most comely of men, the cleanest in their dress, the most exquisite in their food, and the kindliest folk in creation. (..) The city of Alaya is a large town on the seacoast. It is inhabited by the Turkmens, and is visited by the merchants of Cairo, Alexandria, and Syria. (..) There is a magnificent and formidable citadel, built by Sultan Ala ad-Din, at the upper end of the town. Translation by H.A.R. Gibb. 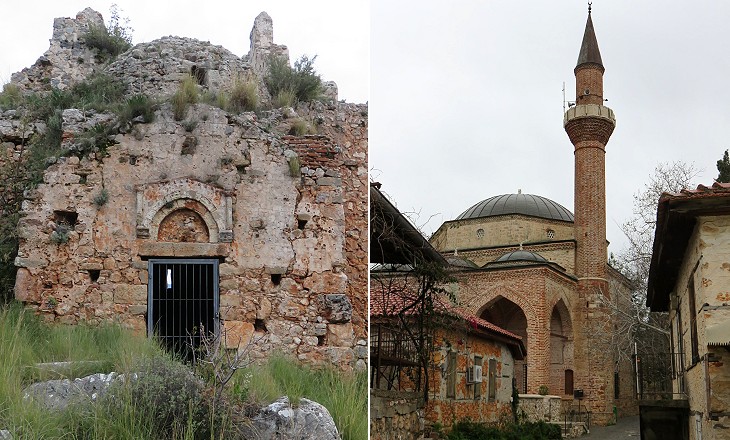 There were the remains of some old Christian churches that have been long since converted into Moskes. Beaufort
Today the first impression one has after having entered the walls of the Upper Town is to be in the countryside. There is just a handful of houses around what was the main mosque of the town. It was redesigned by the Ottomans in the XVIth century, but its small size indicates that Alanya was no longer a large and wealthy town. 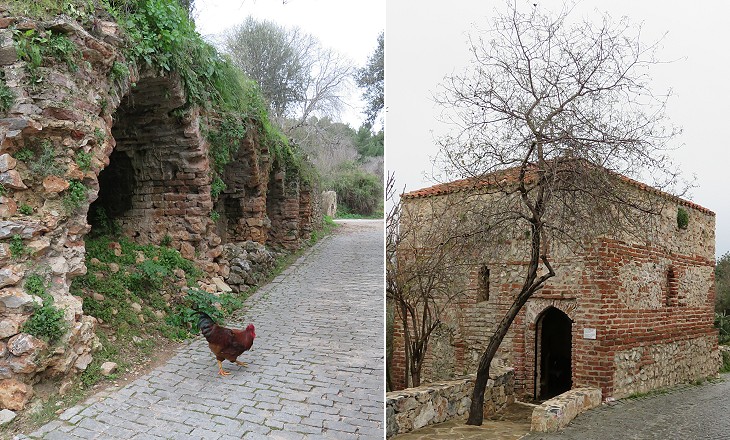 In summer many coaches bring visitors from the beach resorts to the Upper Town where they find temporary stalls selling souvenirs and drinks, but in winter the site looks like a ghost town. 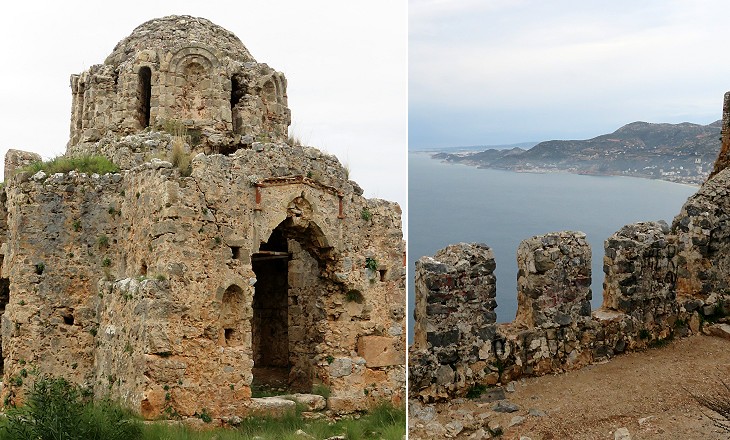 The Seljuks built a small palace, a hammam and many cisterns inside a castle placed at the western and highest end of the headland. The castle existed prior to the Seljuk conquest and it housed a church which was turned into a mosque. Similar to the other fortifications of Alanya it was not upgraded to the requirements of cannon warfare. 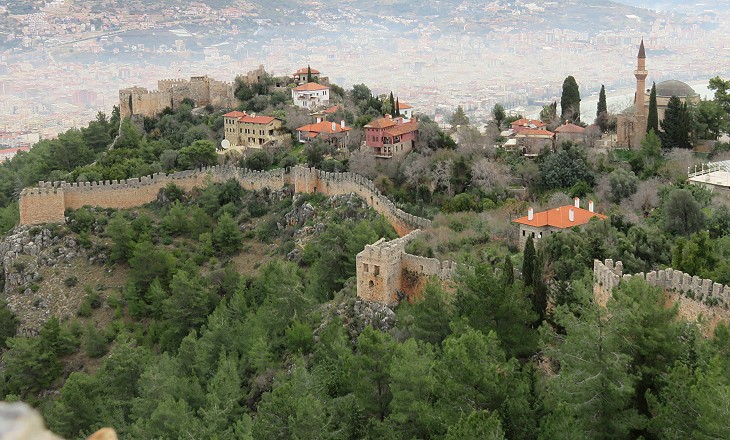 Ehmedek Kale (or Middle Castle) is placed at the northern end of the Upper Town, right above the isthmus (and the modern town). It was built by Master Ehmedek and it incorporated some very ancient fortifications which were meant to protect the Upper Town from a land attack. 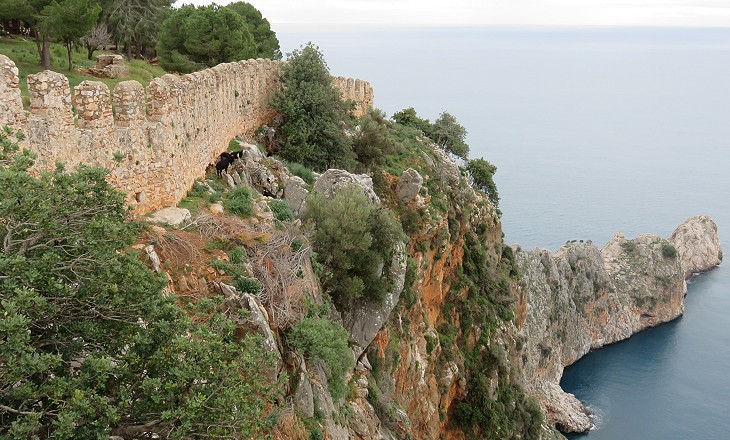 Western end of the headland seen from Ic Kale

The cliffs are from five to six hundred feet high above the sea, and continue equally perpendicular to sixty or seventy feet below it: at a little distance from the shore they are lost under the lofty mountains of the interior; but close in they have a magnificent appearance. Beaufort
The image in the background of this page shows one of the goats in the above photo which risked its neck to smile to me.