- Moorish Seville
(left - Mosaic at Italica; right - decoration at the Alcazar of Seville) 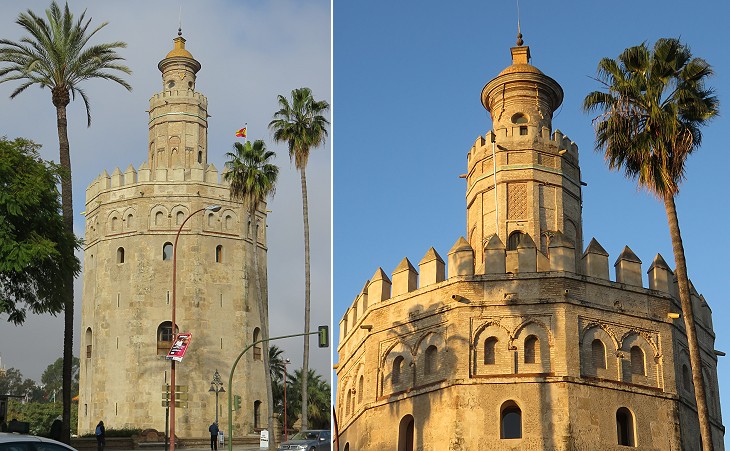 The walls seem of Moorish construction, or of the ages which immediately followed the dissolution of the Saracen empire; as I guess by their form and materials. The ditch is filled up in many places. (..) The Gothic kings resided here, before they removed their court to Toledo. Musa, the Saracen viceroy, took Seville by storm, soon after the victory obtained at Xeres over king Rodrigo. In the general confusion that ensued upon the downfall of the kingdom of Cordova, in 1027, Seville became an independent sovereignty, which was annihilated by the violence of the African prince Jusef Almoravides, who came into Spain in 1097.
Henry Swinburne - Travels through Spain in the Years 1775 and 1776 in which several monuments of Roman and Moorish architecture are illustrated.
The Sevillians pretend that the walls and the Torre del Oro were built by Julius Caesar, which is sheer nonsense, as they are incontestably Moorish, both in form and construction.
Richard Ford - A Handbook for Travellers in Spain - 1855
The tower has twelve sides, is situated along the River Guadalquivir and it was built in 1220 by the Almohad rulers of the town. The second storey was built in the same style by King Peter of Castile, similar to what he had done at the Royal Alcazar. The small circular third storey is a 1760 addition. The tower owes its name to its golden reflection in the river water, which was most likely caused by the addition of straw to the concrete mixture, rather than by a facing yellow tiles. 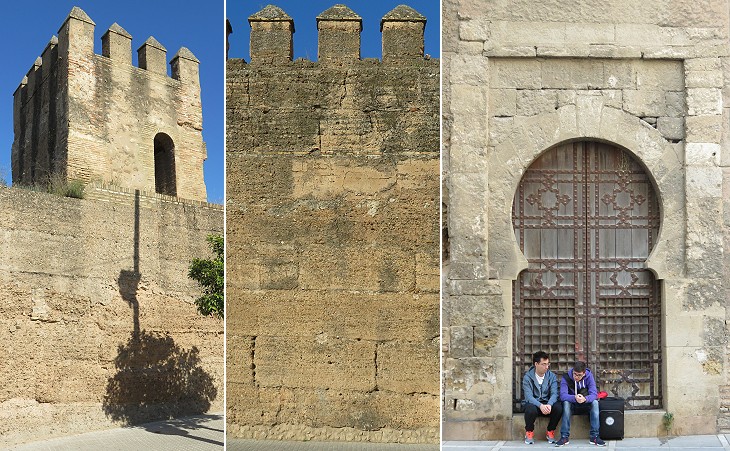 The city itself lies on the left bank of the Guadalquivir which flows along the arc of its irregular mostly circular shape; the circumference is about 5 m.: it is enclosed in Moorish walls of concrete or "tapia" (rammed earth), which, towards the Puerta de Cordova, are some of the most perfect in Spain, and are provided with 66 towers and 15 gates. Ford
Most of the walls were demolished in 1868 to permit the expansion of the town and because they were no longer helpful from a military standpoint. 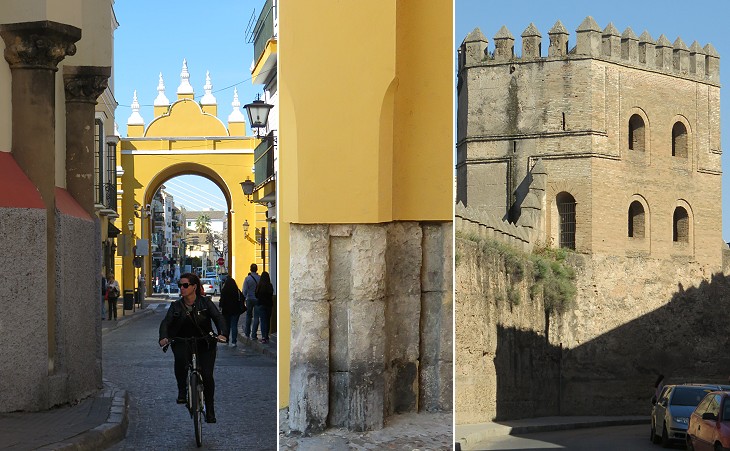 Ferdinand the third, king of Castile, (who, in consideration of his great success against the Mahometans, as well as for his sanctity, was canonized after his death, and is still honoured as a saint of the first rank) took Cordova, and many other important places, from the enfeebled, disunited Musulmen; drove them from post to post, till he reduced the bounds of their empire to a very confined corner of the peninsula; in 1248 after a year's siege, he forced Seville to open its gates to him, and acknowledge his sway. Swinburne
The only section of the walls which was not pulled down was that in Barrio de la Macarena, at the time the poorest neighbourhood of Seville. The walls helped municipal authorities in keeping control over its inhabitants. 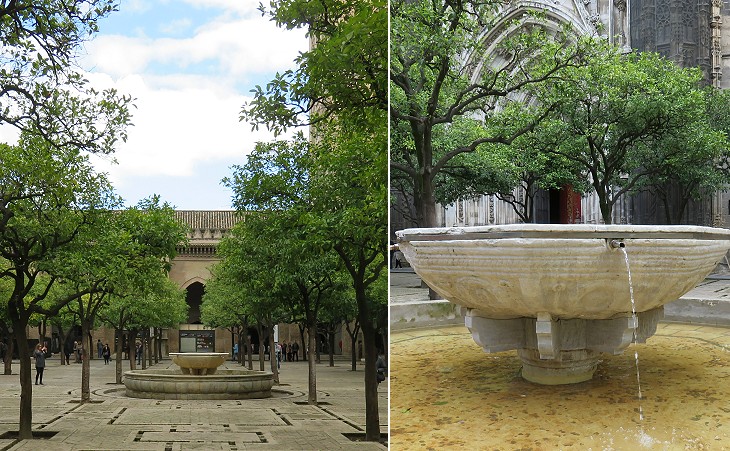 The large orange-trees that shade the fountains in the middle of the cloisters, make them a most agreeable walk. Swinburne
A very large cathedral was erected during the XVth century on the site of the Great Mosque of Seville. The latter was built at the same time as Torre del Oro and it was meant to show the magnificence of the Almohad rulers, who had made Seville the capital of their Spanish possessions. According to art historians it had a prayer hall featuring seventeen naves opened onto the court through thirteen doors. The court is the only part of the complex which was not sacrificed to the construction of the Cathedral. 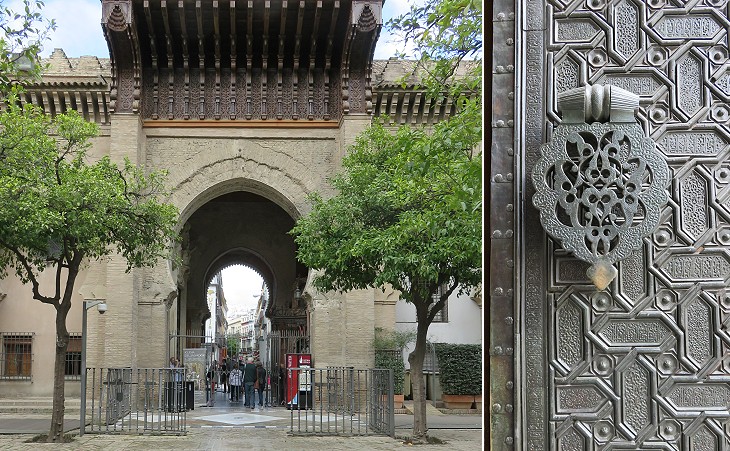 The great gate of the cloisters (the only remains of the mosque) is a piece of handsome Moorish architecture. Swinburne
Observe the Moorish arch and original bronze doors. Ford
The outer side of the gate was redesigned in 1519, but its Moorish aspect was retained. 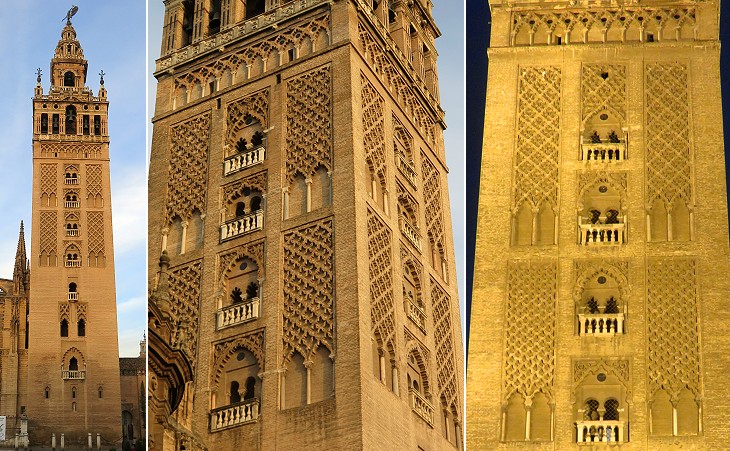 Giralda and views of its Almohad section which is decorated with "sebka", a grid of diamond shapes

At one angle stands the Giralda, or belfry, a tower three hundred and fifty feet high, and fifty square: the Moors erected it about the year 1200: the Christians have added two stories, and a prodigious weathercock, which, altogether, agree much better with the ancient building than patchwork is wont to do: the sculpture of the Saracenic part, which is two hundred feet high, is in a much simpler taste than their artists were accustomed to display in public works. The effect of this tower rising far above every edifice in Seville, is extremely noble. (..) The whole work is brick and mortar; a winding staircase is contrived within, so easy and wide, as to admit of two horsemen riding abreast, above half way up. Swinburne
The Almohads built similar minarets at Rabat and Marrakesh in Morocco; they do not have the aspect of a defensive tower, unlike the minaret of the Great Mosque of Kairouan in Tunisia. Some ancient Roman inscriptions were used for the foundation of Giralda. You may wish to compare Giralda with the slender square minaret of the Great Mosque of Aleppo which was built in 1090 and destroyed in 2013. 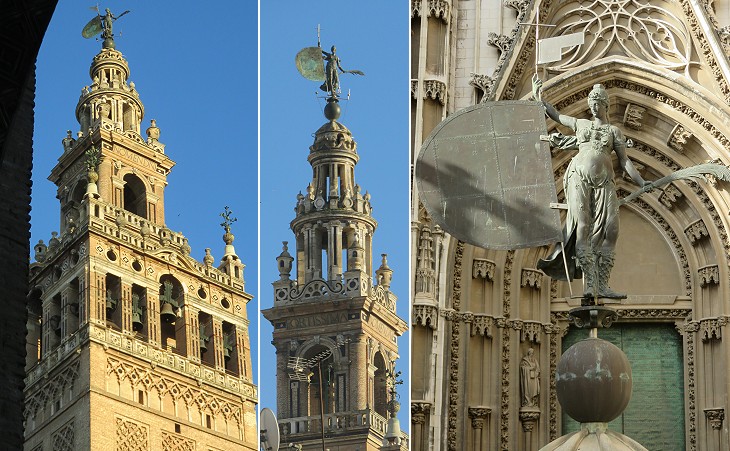 More than half Seville is Moorish, but we shall only select the cream; and first, visit the cathedral tower, the Giralda, so called from the vane, "que gira", which turns round. (..) The original Moorish tower was only 250 ft. high, the additional 100 being the rich filigree belfry, was most happily added, in 1568, by Fernando Ruiz, and is elegant and attractive beyond description. It is girdled with a motto from the Proverbs (18:10): Turris Fortissima Nomen Domini (The name of the Lord is a very strong tower). Ford
The Great Mosque and its imposing minaret were inaugurated in ca 1180, only a relatively short time prior to the Christian conquest of Seville. 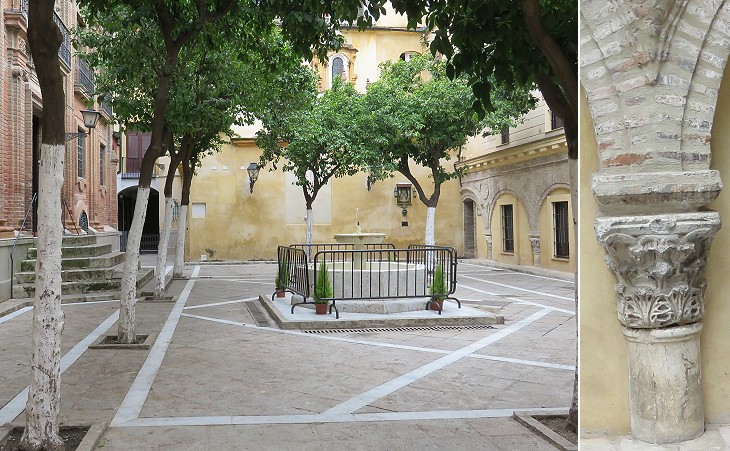 Saint Salvador: The church of this parish was formerly a mosque and served the Moors both for devotion and as a college. The archbishop Don Fernando Tello presided over the Collegiate church in the Calle Gallegos until it was removed to the mosque in the year 1340. The Moorish tower having been shaken by an earthquake in 1396 would have fallen altogether in 1670, had it not been taken down; it was then replaced by one of Christian construction. The tower of the Moors is supposed to have been formed from the sepulchre which held the bones of Saint Isidorus, Saint Leander and the female saints Florentina and Fulgencia converted to this use by the infidels and from the top of which the faithful were called to prayer.
Frank Hall Standish - Seville and its Vicinity - 1840
The oldest mosque of the town is dated 829, at the time of the Umayyad Emirate of Cordoba and it continued to be used by Muslims for almost a century after the Christian conquest. In 1671 the building was demolished to make room for a brand new church. The original court of the mosque, which was built using ancient columns, can still be seen in the space in front of the church.