- Granada: Other Moorish Monuments
(left - Mosaic at Italica; right - decoration at the Alcazar of Seville)

You may wish to see an introductory page to this section or pages on the Alhambra first. 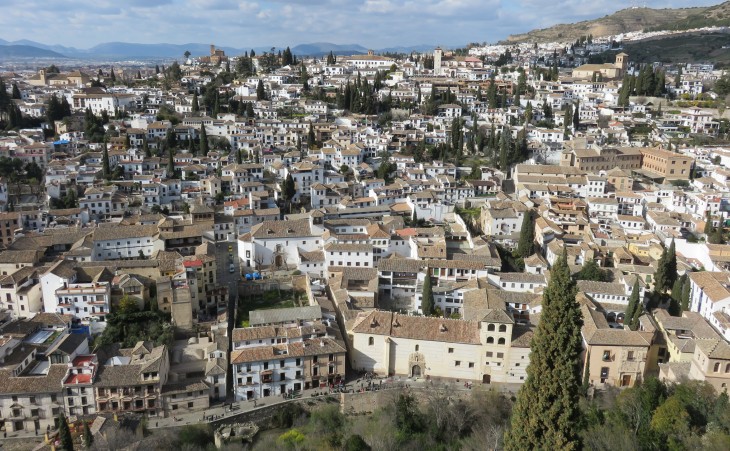 Albaicin from seen from the Alcazaba (Fortress) of the Alhambra

The prospect from the parapet wall is wonderfully grand over the vale of Dauro, the Albaycin and down the Vega (fertile lowland). (..) On the north are the Albaycin, innumerable gardens and orchards and caverns full of inhabitants.
Henry Swinburne - Travels through Spain in the Years 1775 and 1776 in which several monuments of Roman and Moorish architecture are illustrated.
Albaicin is "the suburb of those from Baeza" (a town on the River Guadalquivir east of Cordoba), to whom it was assigned in 1227, when that city was conquered by the Christians.
Richard Ford - A Handbook for Travellers in Spain - 1855 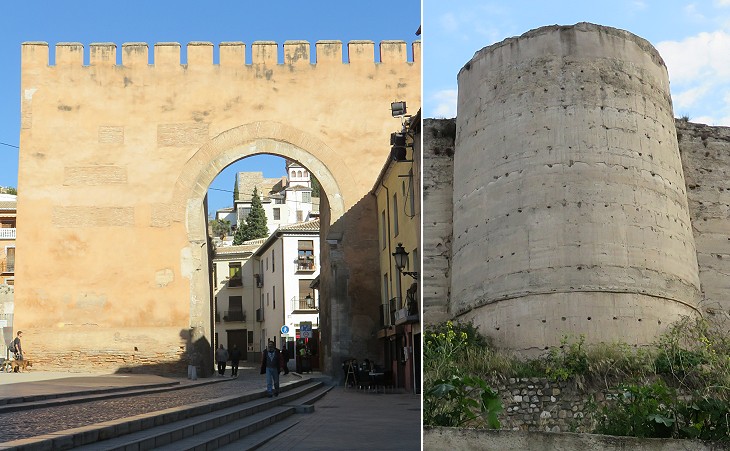 Puerta de Elvira has been barbarously repaired. Ford
The gate is named after Medina Elvira, a town which was abandoned at the beginning of the XIth century because it was difficult to defend. Zawi ben Ziri, the ruler of that town, relocated its inhabitants and his court on the hill of Albaicin. The new settlement was protected by fortifications which are now known as Alcazaba Cadima, the old fortress. 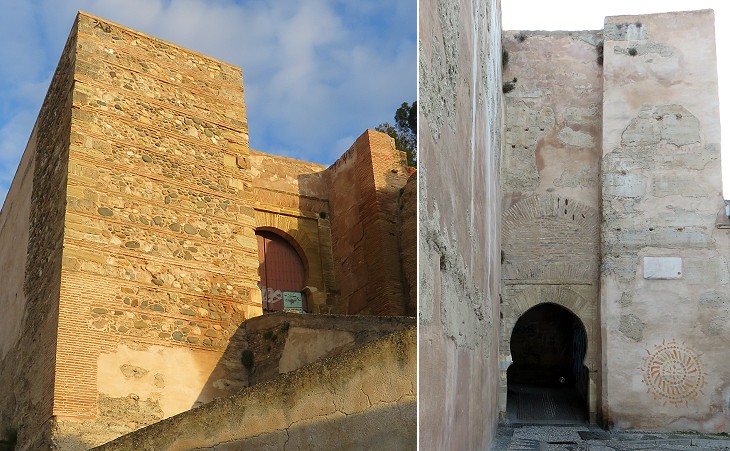 The walls of the Albaicin may be entered by a Moorish gate, above which is another, called La Puerta de Monayta. This fine masonry tower overlooks the entrance to Granada and the Puerta Elvira. Ford
Massive Puerta Monaita was the main entrance to Alcazaba Cadima. The first residence of the Ziri rulers of Granada stood in its proximity. Puerta Nueva was built at the end of the XIth century when the taifa (emirate) of Granada was conquered by the Almoravid rulers of Morocco. 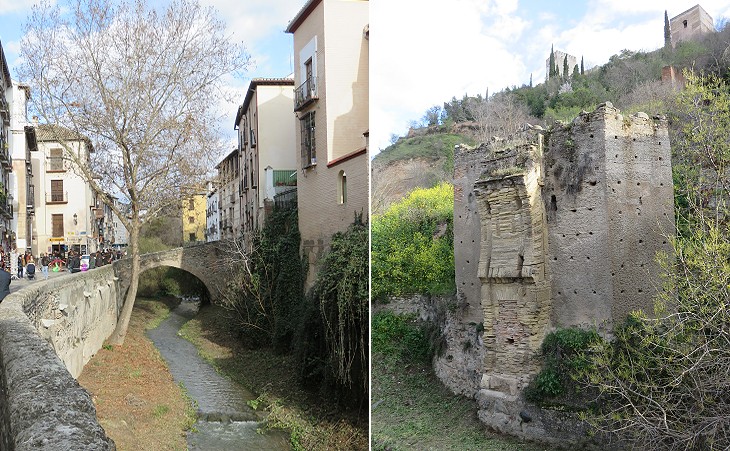 Nearer the Dauro the water has burst all its conduits and broken the gravel bank into a tremendous precipice. Here we descended into the charming vale of Dauro where we remarked the remnants of a Moorish bridge and tower that appear to have supported a gallery of communication between the Alhambra and Albaycin. Swinburne
Eventually the initial settlement expanded along the Rio Darro, a small stream which separated the hill of Albaicin from that of the Alhambra, where the Nasrid Emirs of Granada built their first palace in the early XIIIth century. 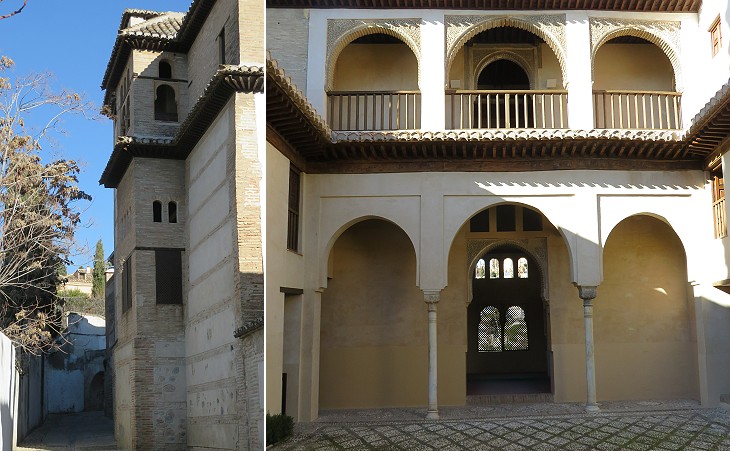 This small palace was built in the XVth century following the pattern of those of the Alhambra. It was the residence of Ayxa al-Hurra (the Honest one), mother of Boabdil, the last Emir of Granada, after her husband fell in love and married Zoraya, a Christian slave. The building was eventually incorporated into a monastery. The image used as background for this page shows a capital in its courtyard. 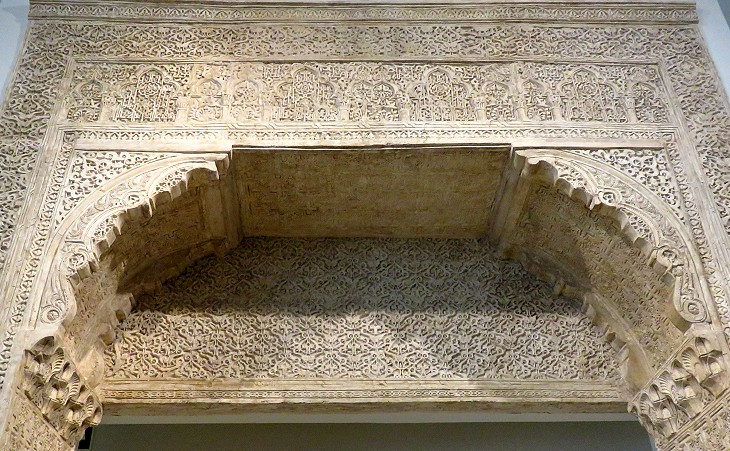 Casa del Chapiz was built by wealthy Muslim families after the 1492 Christian conquest of Granada. In 1571 it was confiscated by the Spanish state because its landlords were involved in a major rebellion of the moriscos, i.e. the Muslims living in Christian Spain. The building was in a state of total decay at the beginning of the XXth century which explains why its remaining original decoration was moved to the Archaeological Museum of Madrid. Walk up the Carrera del Darro, to the celebrated Plaza de Bibrambla, the "gate of the river" (it opens in another window) the Moorish arch struggles amid modern additions, incongruous but not unpicturesque. Ford
This gate was demolished in 1884 on the assumption that it hindered the modern development of Granada. Some of its architectural elements were reconstructed in 1933 in a wood at the foot of the Alhambra. 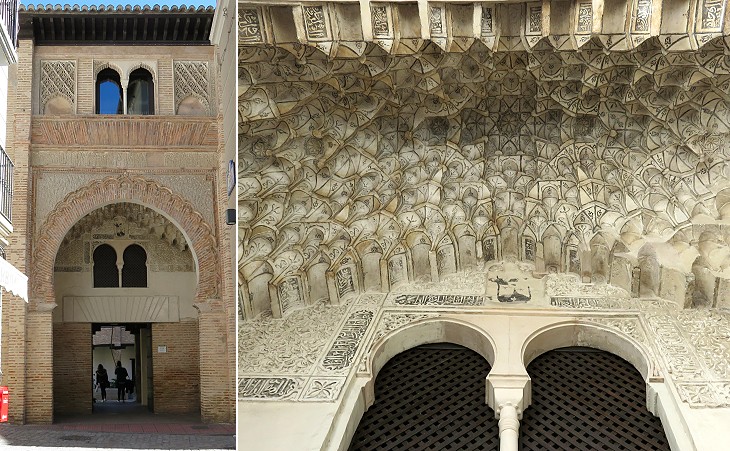 While Albaicin retains most of its XVth century urban layout, the Moorish trading neighbourhoods to its south were impacted by the development of the new town where eventually the Cathedral and the tombs of King Ferdinand and Queen Isabel were built. The existing Moorish buildings of some importance, such as Corral del Carbon, a caravanserai, were adapted to other uses or incorporated into new ones. The Cathedral was built on the site of a mosque. In its proximity stood a madrasa founded by Yusuf I, Emir of Granada in 1333-1354. The building was turned into the Town Hall and eventually it was assigned to the University of Granada. A hall with an elegant mihrab niche is the only surviving part of the madrasa. 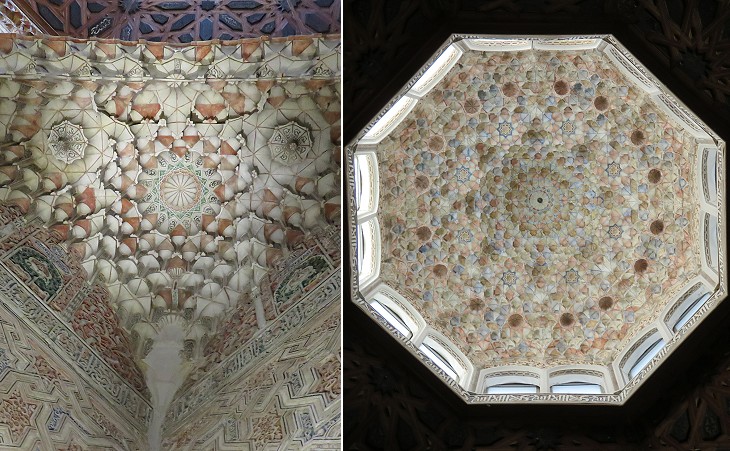 Move to Introduction and the Alhambra Hill or Nasrid Palaces or Granada after 1492.