- Vaison-la-Romaine: Museum Exhibits
(relief at Glanum and quotation from Pliny: "It is More Similar to Italy than to a Province") 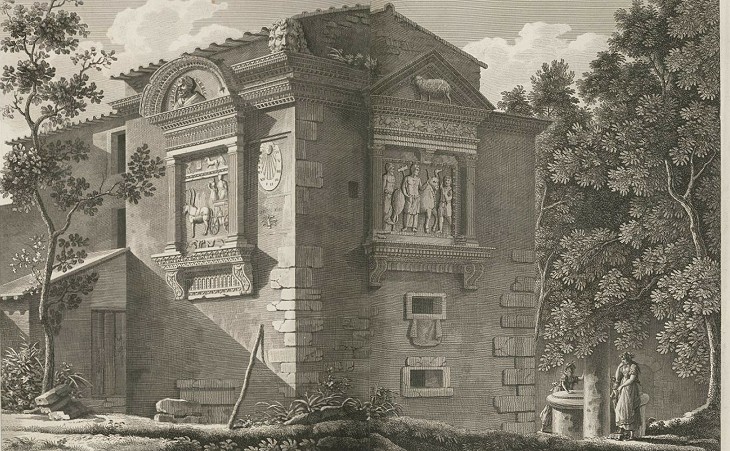 This monument which seems to have been a tomb is today known as Château de Maraudi. It was most likely built at the time of Aurelian or Diocletian, as the style of the mouldings and frames and the execution of the reliefs suggest. (..) One can notice a large variety of decorative patterns. Laborde
A nobleman of Vaison decorated a building known as Château de Maraudi with finely executed reliefs depicting a triumph and a sacrifice.
M. De Vérone - Mémoire sur les Voconces - 1837
The most curious of the bas reliefs and other antiquities built into the walls of the house called Chateau Maraudy have been removed to Avignon.
John Murray III - Hand-book for Travellers in France - 1843 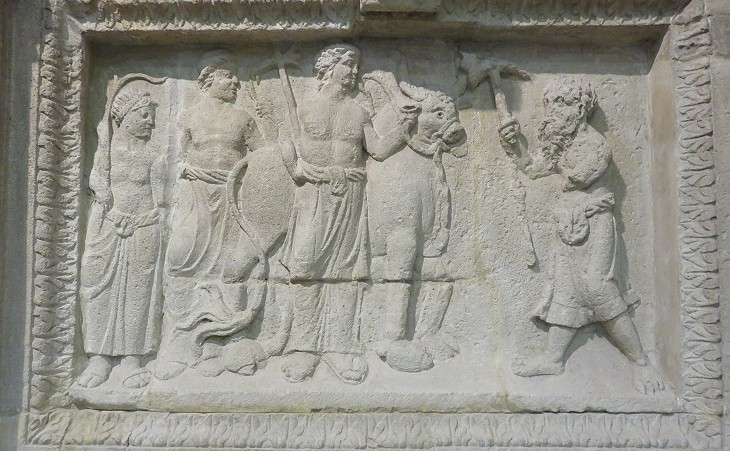 The relief most likely decorated an altar (similar to what can be seen at Djemila) because it depicts a sacrifice. The old man on the right side is perhaps the victimarius, the priest in charge of the sacrifice who did not perform the act of killing himself, but some symbolic rituals. The bull seems to be adorned with a ribbon (see a better relief at Benevento). The Emperors were often portrayed while attending a sacrifice, e.g. Marcus Aurelius. 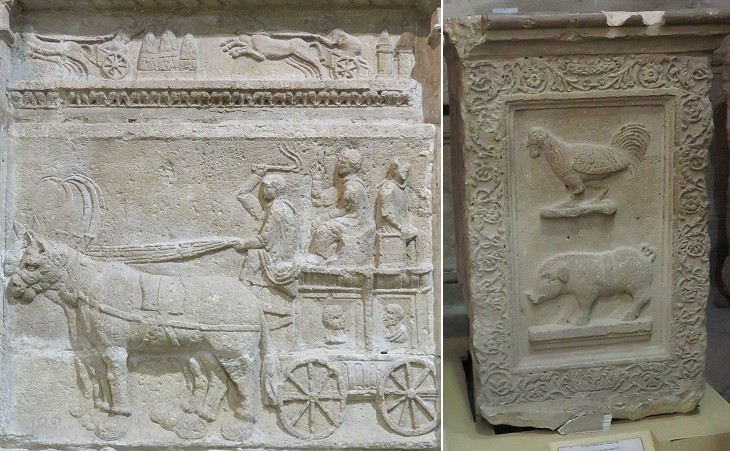 Lapidary Museum of Avignon: (left) ancient reliefs from Château de Maraudi; (right) altar found at Vaison; perhaps it was dedicated to Mercury, the cock being a symbol of the god who was highly popular in Gaul

The unknown landlord of Château de Maraudi pieced two reliefs together: the upper one shows a race in the circus and is very similar to one found at Lyon; the lower one is very interesting because it depicts a carpentum, a four-wheeled carriage drawn by mules which in Rome was used by important women attending processions. In this relief it is a sort of state carriage, richly adorned and ornamented. These vehicles were popular in Gaul and other northern provinces of the Empire instead of gigs (see one at Ostia) which were frequently used in Rome. 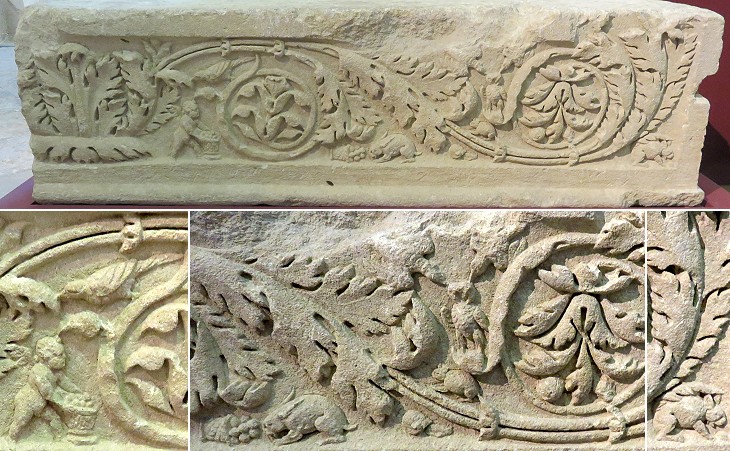 A plate in Laborde's book showed some fragments of ancient reliefs which he saw at Vaison including one based on acanthus scrolls. This was a very popular decorative motif of classical origin, but at one point (ca the end of the Ist century AD) the scrolls began to be "inhabited" by birds and other small animals and eventually by Cupids performing farming activities. This tendency can be noticed in all parts of the Roman Empire, in reliefs (Rome) as well as in mosaics (Philippopolis). 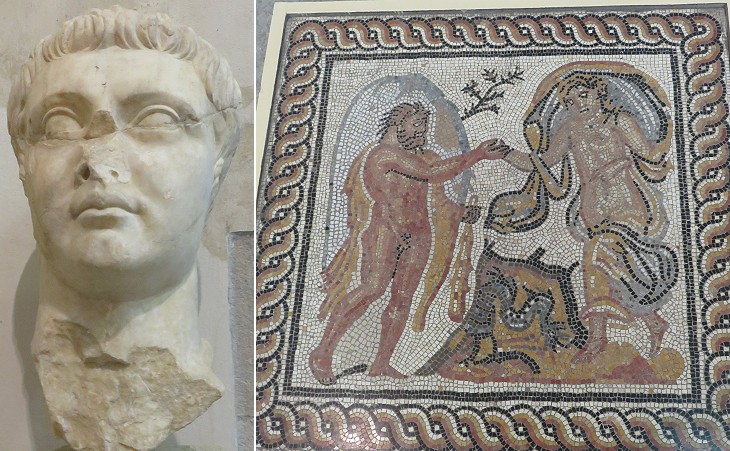 Lapidary Museum of Avignon: (left) head of a statue (maybe Emperor Tiberius) found at the Theatre of Vaison in 1859; (right) floor mosaic depicting Hercules freeing Hesione (whom he will marry) found at Saint-Paul-Trois-Chateaux in 1884, not far from Vaison

During the course of the XIXth century a number of chance findings of ancient works of art occurred at Vaison and its environs. Some of them were moved to the Lapidary Museum of Avignon, but many were bought by antiquarians who sold them to other museums or private collectors. They are now on display in some twenty museums in France, in addition to museums in London, Geneva, Florence, New York, Philadelphia and Toronto. 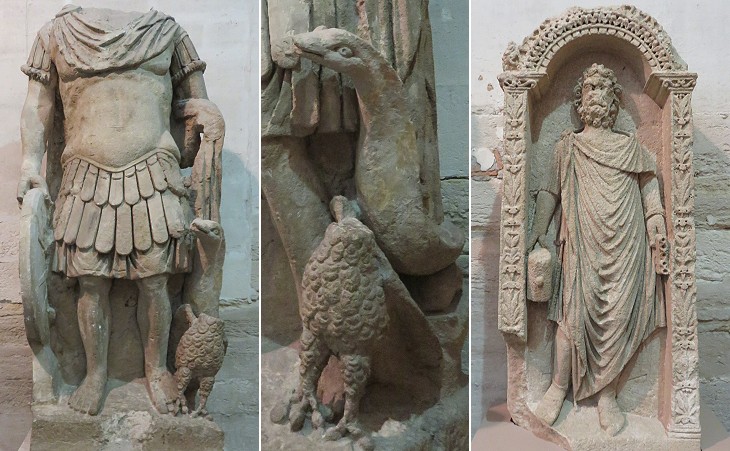 Lapidary Museum of Avignon: exhibits from Seguret very near Vaison: (left) statue of Jupiter; (centre) details showing an eagle and a snake, animals which were associated with the god; (right) altar to Sucellus Silvanus

The Roman temples of Vaison have not yet been identified, but the chance discovery of two statues in 1876 at Seguret shed some light on the gods who were worshipped in the town. The statue of a Roman commander is thought to actually represent Jupiter. This iconography of the god is not the typical one (he was usually portrayed sitting on a throne), but in Germany Jupiter was portrayed as a military commander at the top of many columns (see those at Frankfurt) and perhaps this depiction was popular in Gaul too.
Sucellus was a Gallic god, probably a protector of shepherds. He was associated with Silvanus, Roman god of wood and flocks (see Antinous as Silvanus in a relief at Rome). 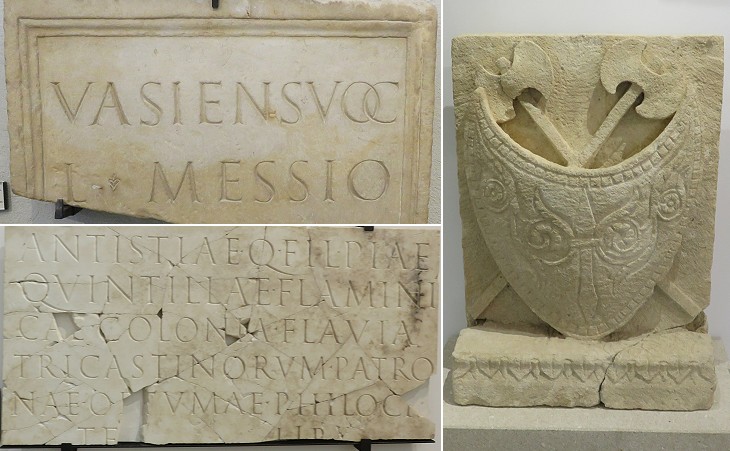 Museum of Vaison-la-Romaine: (left-above) inscription celebrating Lucius Messius by the "Vasiens(es) Voc(onti)"; (left-below) inscription mentioning Colonia Flavia Tricastinorum (Saint-Paul-Trois-Chateaux), the Tricastins were a Gallic tribe living near Orange; (right) a decorative relief with shield and weapons which were not typical of the Romans

The archaeological campaigns undertaken in the early XXth century which unearthed parts of the ancient town led to the decision to open a museum at Vaison to house the works of art and inscriptions which were found there. It was opened in 1924 in the Puymin Archaeological Area. 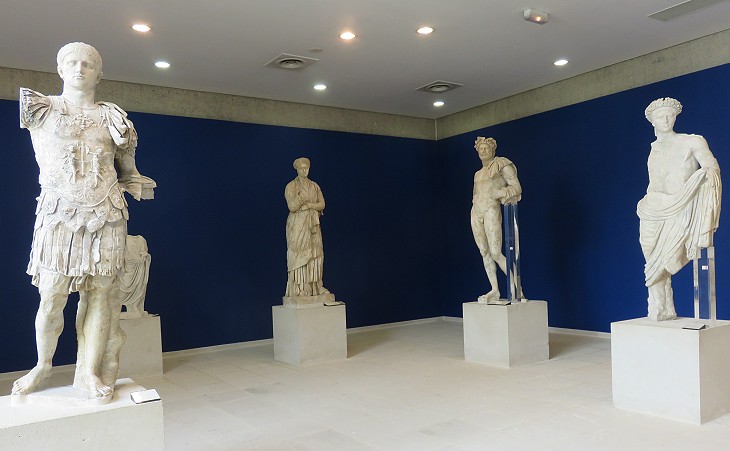 Museum of Vaison-la-Romaine: Hall of the Emperors

In 1974 the exhibits were moved to a new building which was substantially enlarged in 1998. The most impressive hall displays statues which were found at the theatre. Vaison was not as important and rich as Perge, but this hall can be compared with that of the Museum of Antalya where imposing statues of emperors from that town are displayed. 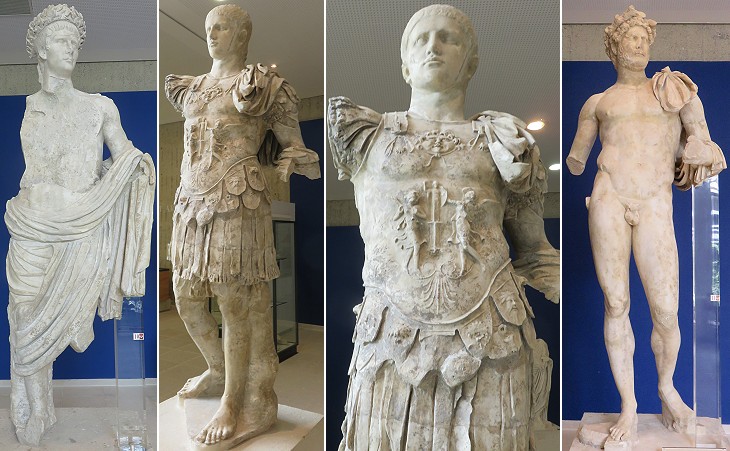 The statues were found broken into many pieces in 1909-1913 in the site of the theatre where most likely they decorated the scenae frons, the wall behind the stage. Those of Claudius and Hadrian depict the emperor with attributes of a hero/god, whereas Domitian is portrayed as a military commander. These two iconographic patterns coexisted at the same time and for the same emperor. The head of Domitian was most likely reworked from one of Emperor Nero, whose memory was damned (the same fate occurred to Domitian and that at Vaison is a rare portrait of him; see another portrait at Ephesus). 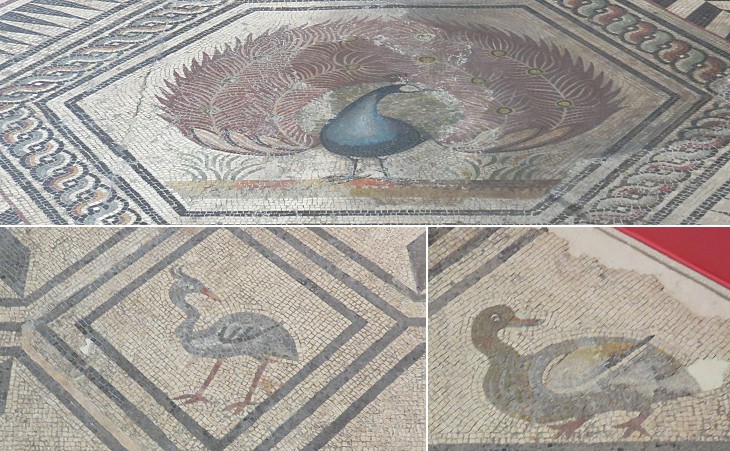 Museum of Vaison-la-Romaine: details of a floor mosaic (see it in the introductory page) from the House of the Peacock at the La Villasse Archaeological Area

Roman floor mosaics have withstood the ravages of time owing to the sound techniques which were employed in laying them down. In some instances their emblemata, small sections portraying human beings or animals, were executed very carefully and by using grades of the same colour to achieve the nuances of a painting. The depiction of a group of similar animals, e.g. sea creatures as at Tarragona or birds as at Carthage or at the House of the Peacock at Vaison, was one of the most popular subjects. The frontal view of the peacock at Vaison is not very frequent, because the bird was usually depicted in a side view which showed its long tail (e.g. at the Museum of Gaziantep in Turkey). 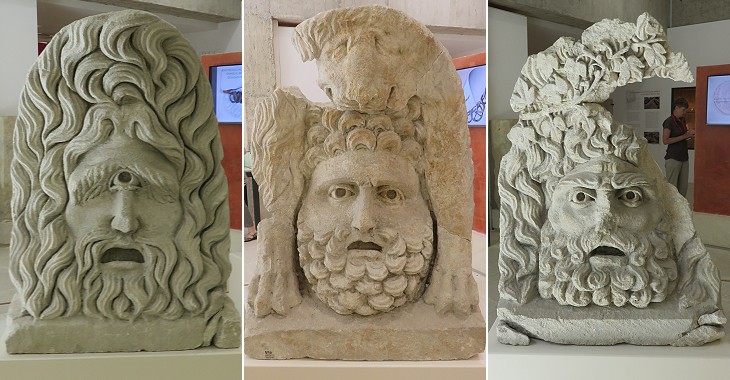 Museum of Vaison-la-Romaine: "larvae", funerary masks from a mausoleum of the Ist century AD found near Orange in 1999: (left to right) Polyphemus, Hercules and Bacchus

The protection of a tomb was a major concern in many ancient civilizations including those in which cremation was the usual method for disposing of a body and the tomb contained ashes. The Pharaohs did not hesitate to utilize enormous resources to safeguard their final abode and large and imposing mausoleums were built also by other rulers. The Roman citizens who could afford to build a small family tomb or just to pay for a gravestone placed them under the protection of the Mani, ancestral gods of the underworld. Funerary inscriptions which began with D(iis) M(anibus) often included a warning/appeal against potential vandalism or, as noticeable in many cases at Lyon, the words sub ascia which had the same purpose. Tombs and sarcophagi (see one in Algeria) were often decorated with heads of Gorgons which were expected to scare evil spirits away. In Roman Gaul this task was entrusted with larvae, funerary masks which can be seen also in the museums of Lyon, Vienne and Orange.
The image used as background for this page shows a graffito portraying a gladiator on the wall of a Roman house.

Return to The Town.