You may wish to see a map of the region and a short introduction to this section or a page on the town first. 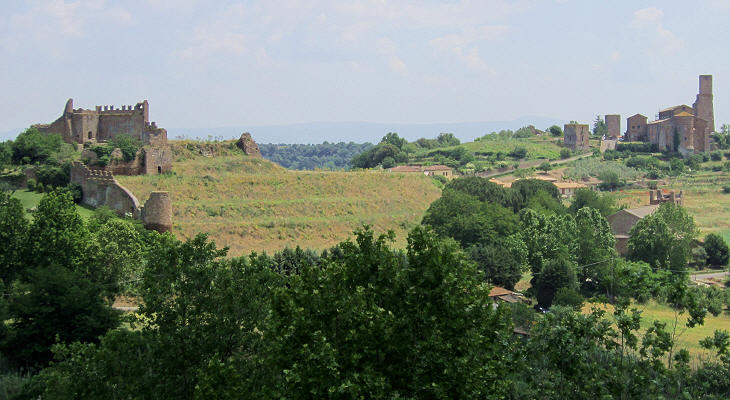 The mediaeval remains of Toscanella are far more important than the Etruscan ones. The hill of San Pietro which is outside the later town, was probably the arx of the Etruscan city.
Augustus J. C. Hare - Days near Rome - 1875
The Etruscan town of Tuscania was founded on an isolated hill and later on it expanded northwards to include other hills. In the Middle Ages the initial settlement was called Civita (city) to point out that it was the centre of the town where the cathedral church was located (initially S. Maria Maggiore and then S. Pietro).

Musei Vaticani - Museo Gregoriano Etrusco: sarcophagus of a magistrate found near S. Pietro in 1818; the inscription lists the positions held by Arnth, son of Laris and Tanchvilus who died at 36; he was portrayed on a chariot preceded by officers who, similar to the Roman "lictores", held symbols of his rank (IIIrd century BC)

In the late XIVth century the inhabitants, greatly reduced by the Black Death, a bubonic plague which spread through Europe in 1348-1349, decided that the wall enclosure was too large to be effectively defended. Civita which was separated by the rest of the town by a ravine was excluded by the redesigned walls. What occurred to Civita di Tuscania is similar to what occurred to Civita di Bagnoregio. The medieval town was known as Toscanella (in 1911 it was renamed Tuscania). S. Maria Maggiore lies low down at the bottom of a deep valley, and in front of the facade is a gigantic campanile, now partly ruined, built, so the story goes, that the builders of the facade of S. Pietro should not see and imitate the front in progress at S. Maria.
Thomas Graham Jackson - Byzantine and Romanesque Architecture - 1920
The two medieval churches of Civita ended up by being surrounded by grazing land for sheep; they were founded in the VIIIth century, but were largely renovated in the early XIIIth century; they have Romanesque and Gothic elements and they depart from the structure of the early churches based on the design of the ancient Roman basilicas. An imposing bell tower, which most likely was built for a defensive purpose, hides the view of S. Maria Maggiore. 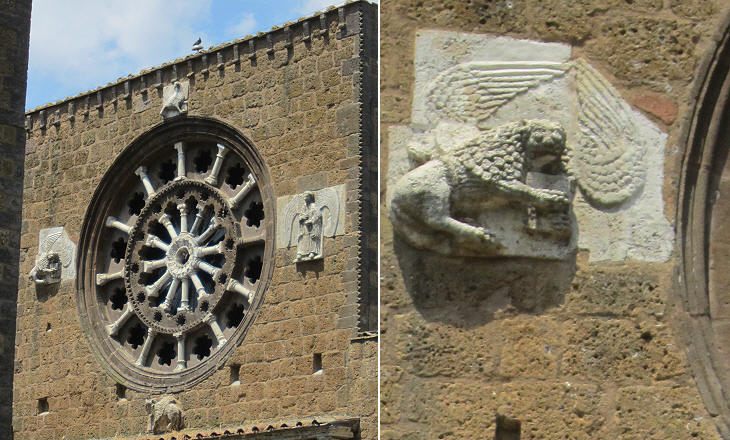 S. Maria Maggiore: the rose window and a detail showing a winged lion, the symbol of St. Mark 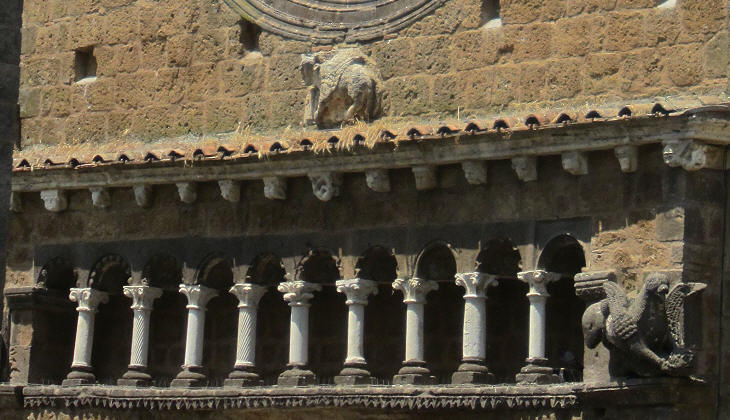 The splendid façade shows the work of at least two dates. (..) It has a graceful arcade of little arches or colonnettes, and in the wall over this, which is square and not gabled, is a magnificent rose window, a real wheel with colonnettes for spokes, very far superior to that at S. Pietro. Jackson
The use of marble and of stones of different colours in the rose window and in a small gallery lightens the design of the façade which was completed in 1206. 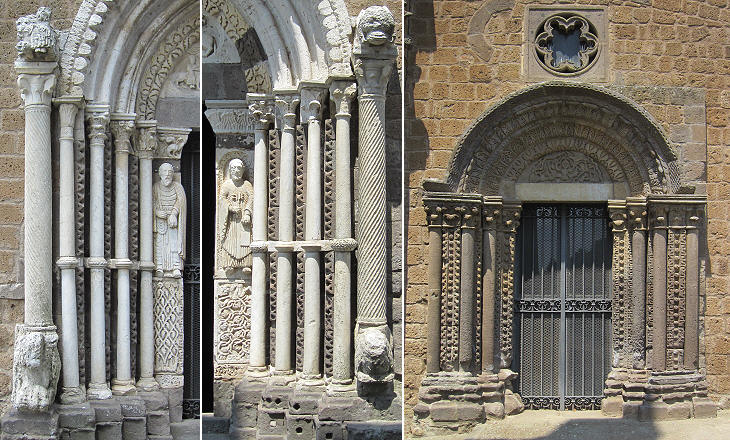 The portals of S. Maria Maggiore have a very elaborate decoration; it is likely that the marble employed in the main portal came from ancient Roman buildings, probably a temple upon which the church was built.
The two side doors are Romanesque, and in the zigzags' of the left portal and the dogteeth of the right hand one, we find with surprise features familiar to the northern eye. Jackson 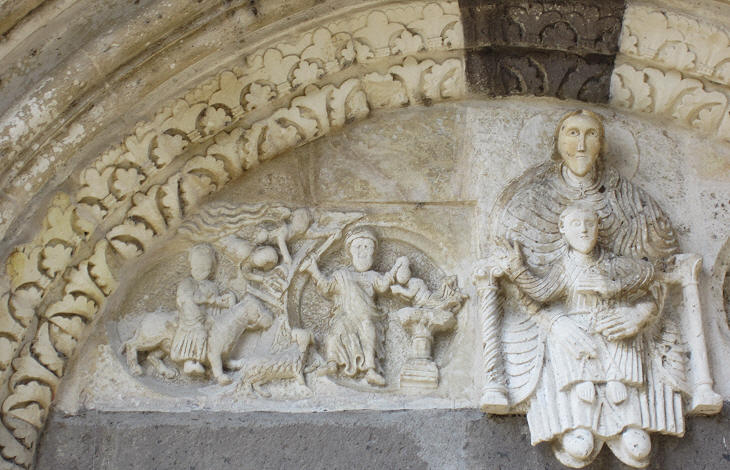 The tympanum seems out of place, as if it had belonged to a different doorhead. The figure of the Madonna is not in the middle, and the circle with the Lamb on one side does not balance the long oval or double circle on the other containing the Sacrifice of Isaac, and the story of Balaam. Jackson
The side portals are decorated with symbolic reliefs while the main one shows a sort of modern strip: two scenes portray the Sacrifice of Isaac; a capital in the same portal shows the Flight to Egypt (it opens in another window). 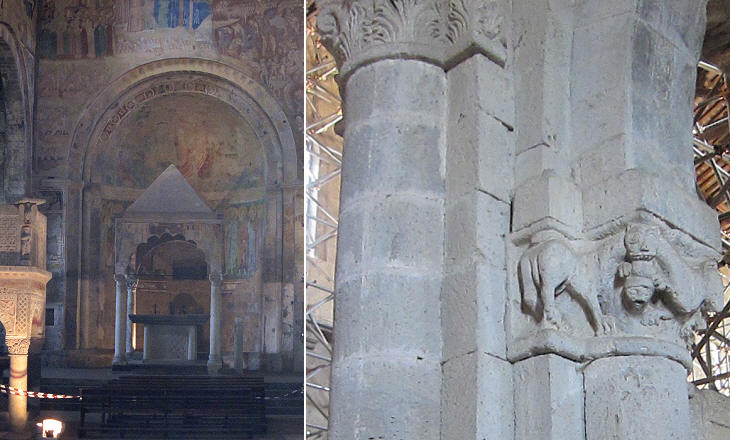 Into some capitals figures are introduced, which are barbarous in the extreme. (..) Though deserted, these two remarkable churches are well cared for; and as they have been disused since the middle ages they have fortunately escaped the alterations and mutilations of Rococo and neo-classicism. Jackson
S. Maria Maggiore and S. Pietro were not deconsecrated and abandoned and their interior continued to be decorated, but overall they retained their medieval character. S. Pietro remained the cathedral of Tuscania until 1572. 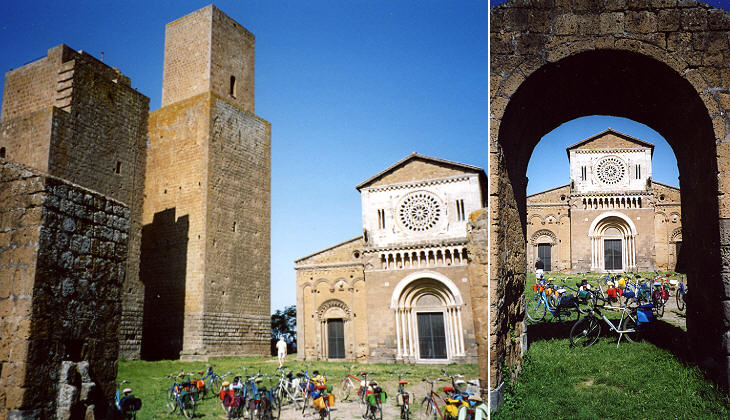 S. Pietro during a visit by bicycle tourists (another view of the façade can be seen in the image used as background for this page)

The hill of S. Pietro is surrounded by a band of square mediaeval towers, which are double, - a tall, slender tower being encased, with no intervening space, in an outer shell of masonry. On this height also is the Cathedral (S. Pietro), a most interesting building. Hare
S. Pietro was built on the acropolis of the ancient town, in a more favourable location than S. Maria Maggiore; the fact of being surrounded by grass gives to the church a somewhat English character. 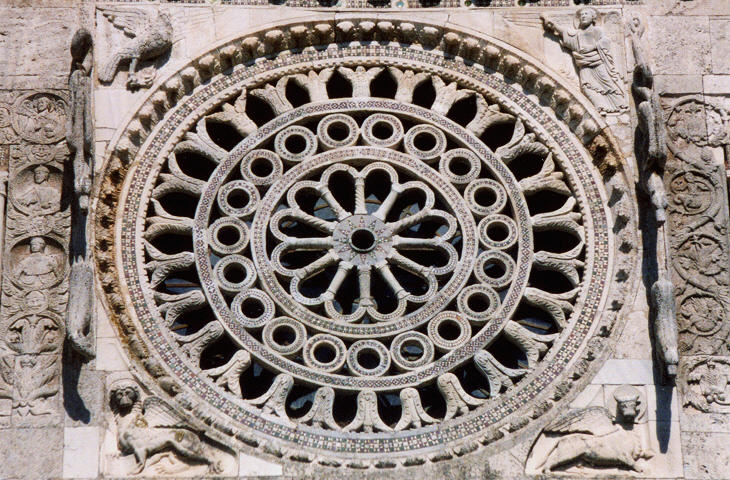 S. Pietro: rose window with the symbols of the Evangelists

While the rose window of S. Maria Maggiore conveys the impression of a wheel, that of S. Pietro seems a lacework. It is similar, but more elaborate than the rose windows of S. Giovanni degli Zoccoli in Viterbo and of the Cathedral of Spoleto, which also show the symbols of the Evangelists at the four corners of a square frame. 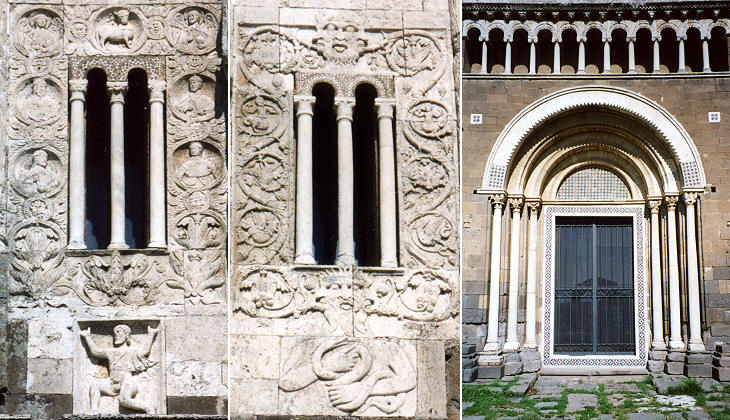 The wonderfully rich central division of the façade is covered in its upper story with figures of men, devils, and beasts, possible and impossible, in high relief. Hare
The decoration of the façade includes also a representation of the Church: the medieval artist made use of an ancient relief which he thought represented Atlas and he positioned it below the symbols of the Church (two angels, the Lamb of God, four saints) as if Atlas was supporting the Church, rather than Earth; as a matter of fact the ancient relief portrayed a dancing satyr. The representation of Evil has a similar structure; the figure below the window is perhaps King Minos, who in the Middle Ages was regarded as the judge of the underworld and had a snake like tail. These reliefs are similar to those which decorated S. Maria Impensole in Narni.
While the reliefs are typically medieval, the portal, unlike that of S. Maria Maggiore, has an almost classic design and decoration. 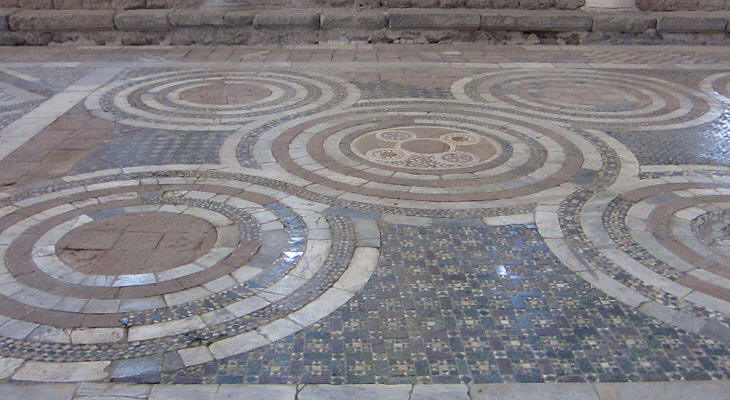 The pavement of the interior, the main portal and the rose window are all Cosmati works, although it has not been ascertained who exactly did them; at the time S. Pietro was being completed Jacopo di Lorenzo and his son Cosma were working at the Cathedral of Civita Castellana, which is not very far from Tuscania; maybe one of their assistants was commissioned the decoration of S. Pietro. 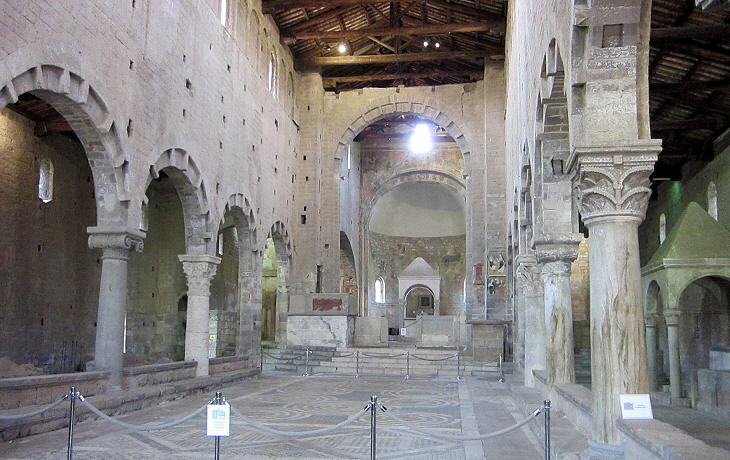 Within, the church is a museum of pagan relics, the columns which divide the nave from the aisles are evidently Roman, the font rests on a pagan altar, and the crypt beneath the high-altar, said to have been a Roman bath, has twenty-eight ancient pillars. Hare
The aisles are parted from the nave by a dwarf wall between the pillars, and a seat on the side next the nave. The men probably sat in one aisle, the women in the other, and the central nave, like the schola cantorum of S. Clemente, would have been reserved for the clergy. Jackson
Ancient columns and capitals were utilized for the construction of S. Pietro, but also capitals with a very new design were employed; the height of the columns is unusually low when compared to that of the building; another peculiar aspect is given by the stone benches between the columns. 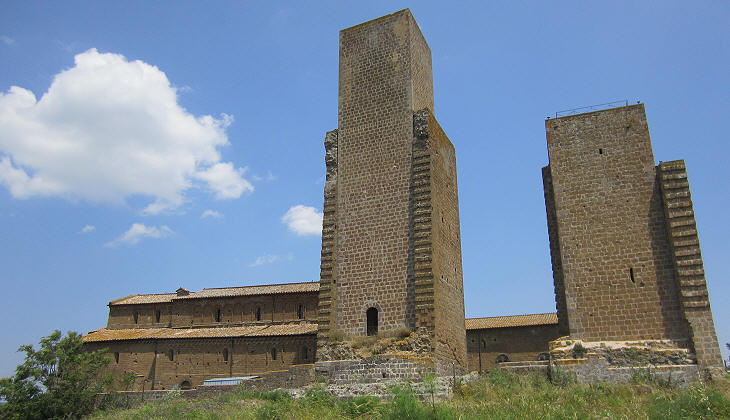 Over the centuries most of the buildings which surrounded S. Pietro have disappeared, but not the tall towers which protected this section of the medieval town. The bishops of Toscanella lived in a palace on the right side of the church. 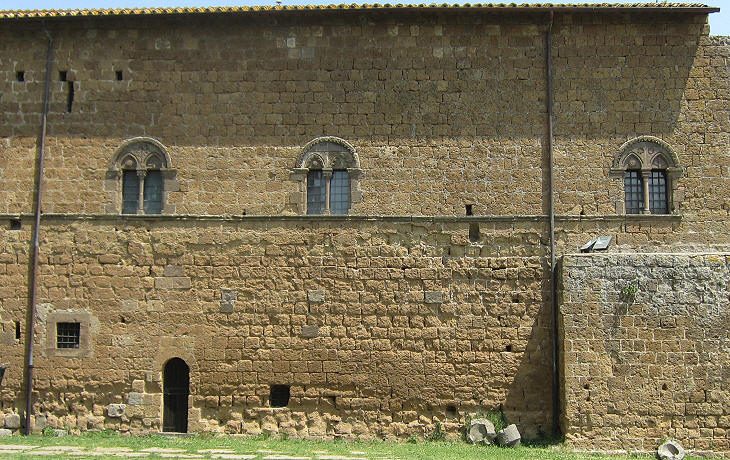