Viterbo is located at the centre of a low plateau (1,000 ft high) between the Tyrrhenian Sea and the Tiber valley which is some 300 ft high. The edge of the plateau towards the valley is marked by deep ravines which isolate long and narrow hills of tuff, a light porous rock formed by consolidation of volcanic ashes.
The Etruscans built their towns on these tuff hills because they were easily defensible and healthy, whereas the land by the river was marshy, prone to outbreaks of malaria and exposed to floods. 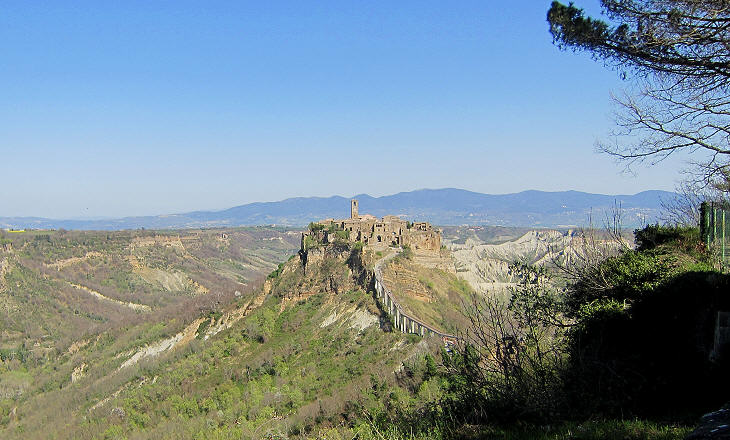 View of Civita di Bagnoregio, the mountains in the background are situated in Umbria on the other side of the Tiber valley

Considerably to the right of the road from Bolsena to Orvieto, but accessible from it, is the wonderfully picturesque mediaeval town of Bagnorea, the ancient Balneum Regis, in the midst of a wild volcanic district, and occupying a high hill-top, only approached by narrow ridges across tremendous gulfs which separate it from the table-land.
Augustus J. C. Hare - Days near Rome - 1875
Similar to many other towns around Viterbo, Bagnoregio, an ancient Etruscan settlement which acquired importance in the XIth/XIIth centuries, was built along the ridge of a hill which was protected on three sides by deep ravines. The hill rests on layers of clay which over time tend to slip downwards, thus causing the collapse of sections of the tuff rock above them. Landslides and in particular that which occurred after an earthquake in 1695 have isolated Bagnoregio from the plateau to which it was once united. Civita means town and it indicated the part of Bagnoregio which during the Middle Ages was surrounded by walls and where the cathedral was located. In the 1950s Bonaventura Tecchi, an Italian writer who was born at Bagnoregio, called Civita la città che muore (the dying town) and drew the public's attention to its deteriorating situation. Thanks to his appeals a light pedestrian bridge was built to facilitate the access of visitors and to promote the conservation of Civita. Western side of Civita

In the last fifty years Civita di Bagnoregio has become a very popular location probably because the view of its western side is so photogenic, a sort of fairy tale vision of a medieval town. The 1883 Baedeker's Guide to Central Italy had just one line on it: Bagnoregio is picturesquely situated on a hill surrounded by ravines, and interesting to geologists. The first edition (1923) of the very detailed Guide to Italy published by Touring Club Italiano in 16 volumes had a very short reference to the medieval houses of Civita, whilst it covered in detail the new town. Porta S. Maria and the statues which decorate it

The gate is also known as Porta del Cassero (donjon) which indicates it was part of lost fortifications. The statues of lions holding a human head which decorate it are medieval representations of the Church and were usually placed at the entrance of a church (see those at nearby Civita Castellana and at S. Lorenzo in Lucina in Rome). Lions and eagles were among the most popular iconographic symbols of the Classical World and they continued to be popular during the Middle Ages, notwithstanding the influence of monotheist religions (see Ulu Beden, a medieval tower at Diyarbakir in Turkey where an eagle and two lions/sphinxes are placed in a way which is similar to Porta S. Maria). 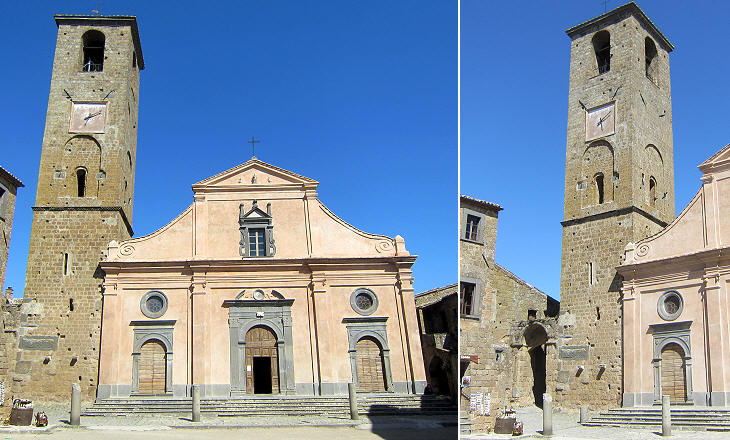 Bagnoregio is recorded as a diocese as early as the VIIth century; its cathedral is dedicated to St. Donato of Arezzo, a IVth century martyr. The church was built in the XIIIth century; it was probably preceded by a portico supported by granite columns. In the XVIth century the building was modified and the façade was redesigned. 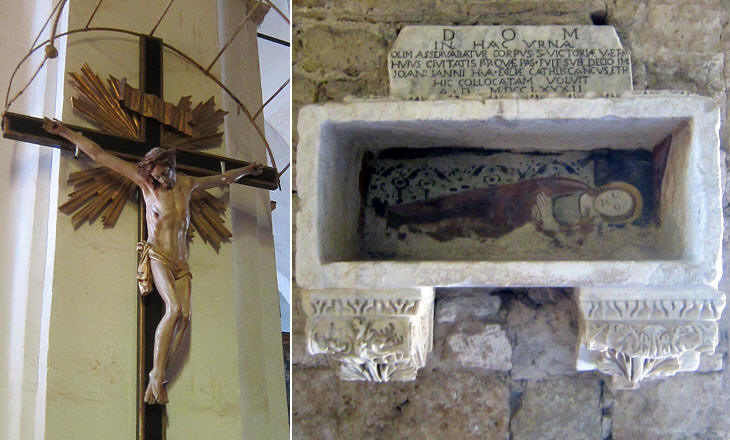 S. Donato - interior: (left) XVth century crucifix (School of Donatello); (right) ancient Roman marbles which housed the relics of St. Victoria until 1782 when they were moved to one of the side altars

S. Donato was the cathedral of Bagnoregio until 1699 when the bishopric see was moved to a new church built in the safer location where most of the inhabitants had moved. S. Donato however was not abandoned because of the relics of St. Victoria, a IIIrd century martyr who is very popular in the region. The church does not house the whole body of the saint because the skull is kept at Sacro Speco at Subiaco and the mandible at Urbania in the Marches. 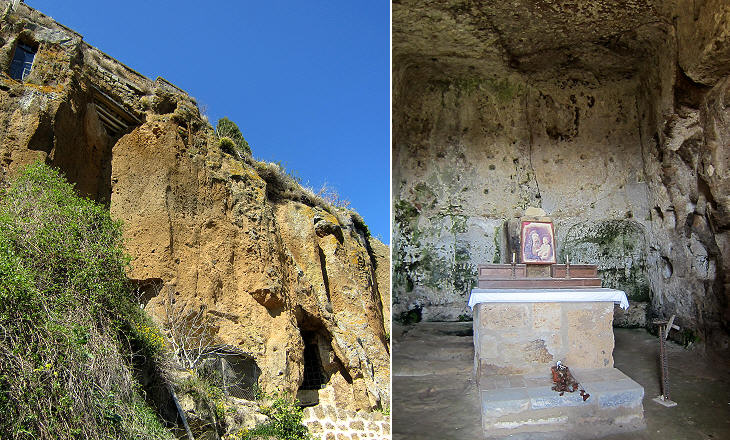 The inhabitants of Civita started to move to a safer location during the XVth century and by the end of the following one the majority of them had relocated to new Bagnoregio. Civita retained a sizeable population until June 1695 when an earthquake caused its whole eastern section to collapse into the precipice. The quarter was known as Contrada Carcere, because the prison was located there.
A factor which contributed to the landslide was that the rock had been quarried for centuries, since the time of the Etruscans. The whole of Civita was built with small blocks of tuff which were quarried on the sides of the hill where the town stood. In addition the Etruscans pierced from side to side the base of the hill.
What occurred at Civita was a common practice of the Etruscans and after them of the Romans. The Janiculum hill is pierced by underground galleries which were used for quarrying tuff. 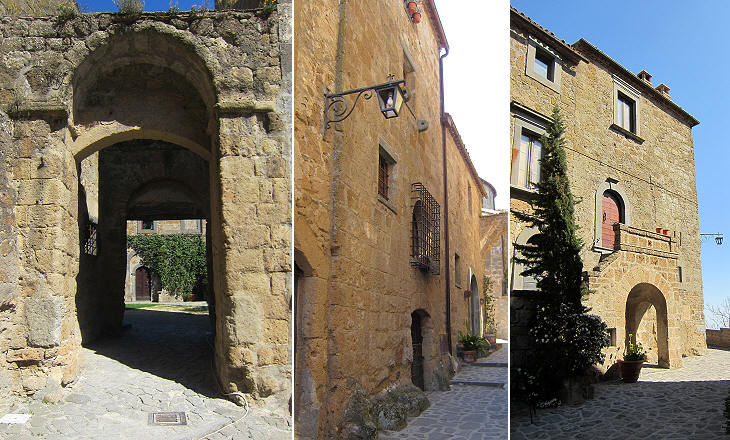 In the streets of Civita

Today Civita is enjoying a second life. The difficulty of access which caused its almost total abandonment, today attracts people who look for quiet and silence. Most of the houses have been restored in recent years and an advanced system monitors the stability of the hill. 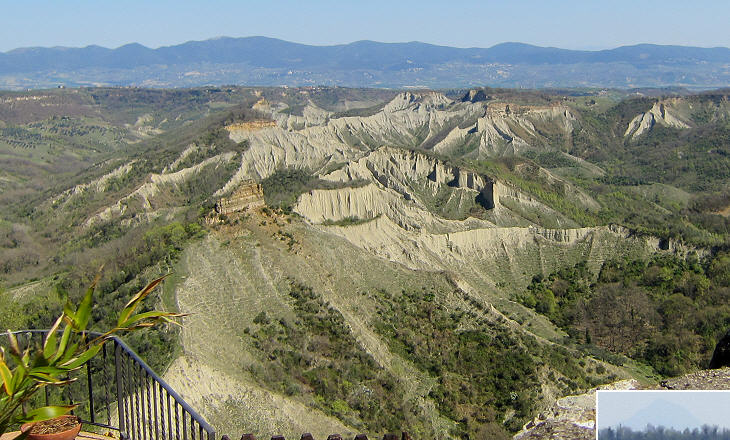 View from the eastern end of Civita towards the Tiber valley and beyond it towards Alviano; (inset) detail of the view southwards showing the tip of Monte Soratte

Civita ends with a small terrace near a short stretch of the ancient walls. From there one can see tuff rocks and clay deposits forming unusual shapes over an area of several square miles. Italy is a densely populated country and it is very rare to see such a large area without a house or a road, with the exception of some Alpine regions. 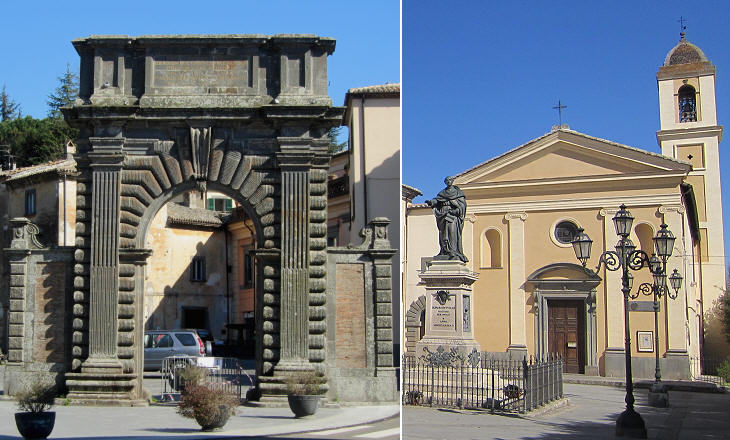 Towards the end of the XVIth century what was a suburb of Bagnoregio became its main centre. In 1589 the construction of a fine gate by Cardinal Gian Girolamo Albani, Governor of Bagnoregio, was a sort of confirmation that the new town had replaced the old one.
This remote town was the birth-place of Giovanni da Fidanza, the "Seraphic Doctor," who obtained his name of S. Buonaventura from the exclamation of S. Francis, "O buona ventura," when, during a severe illness, he awoke from a death-like trance in answer to the prayers of his great master. Hare
Until recent years Bagnoregio was mainly known for having been the birthplace of St. Bonaventure, a member of the Franciscan Order, who is regarded as a sort of co-founder of the said order and the author of a very popular Life of St. Francis of Assisi. 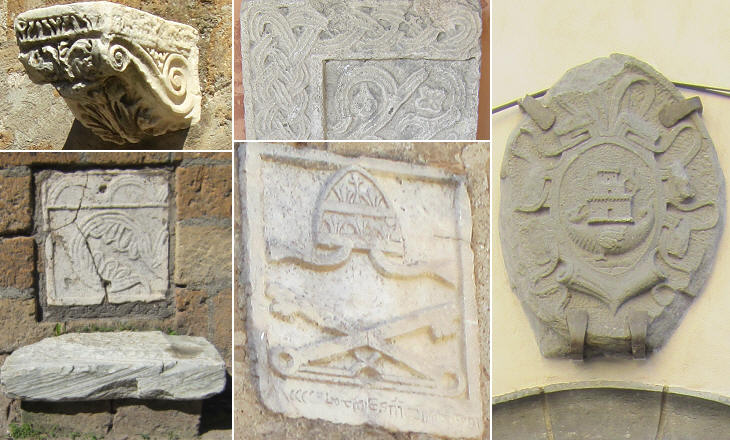 The image used as background for this page shows a detail of a modern painting in S. Bonaventura, a church near Porta Albana.