The British Parliament authorized the construction of 8,000 miles of railway lines throughout the United Kingdom between 1836 and 1847. The British example was followed by many European countries and by the U.S.A.
The development of railway in Italy was hampered by the division of the country in seven states, some of which (the Duchy of Modena and the Papal State) opposed the new transportation system on religious grounds. When eventually Italy was unified in 1870, the Government approved the construction of new lines by private companies and in particular of a direct line between Florence and Rome across Val di Chiana. 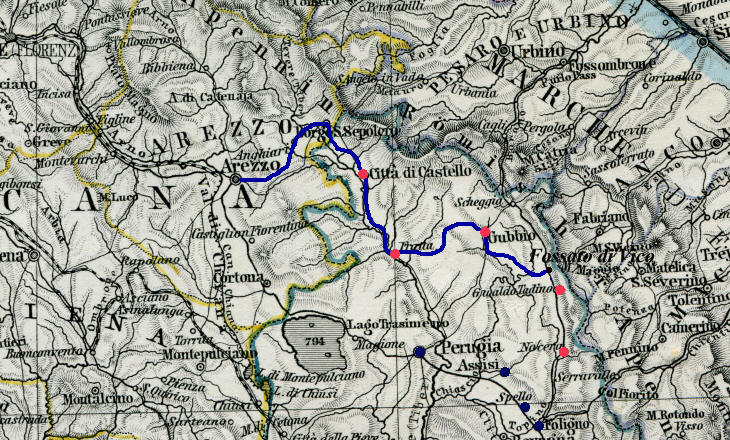 1864 map of Central Italy; (right) the blue line shows the "Ferrovia Appennino Centrale" line; pink dots indicate the towns covered in this section. The map shows some other towns of Umbria (blue dots) which are covered in this website namely Assisi, Perugia, Spello and Foligno

In 1884, at the request of a series of towns which were not yet linked to the main railway system, the Government authorized the construction of Ferrovia Appennino Centrale, between Arezzo, which was on the Florence-Rome line and Fossato di Vico, a small town on the Rome-Ancona line.
The new line was completed by 1886, but it never became the direct fast connection between Florence and Ancona which it was forecast to be.
During WWII the line was partially dismantled to reutilize the steel of its rails. After the war only the section between Sansepolcro in Tuscany and Fratta (Umbertide) in Umbria was reactivated, because Fratta was linked to Perugia by another line.
This section covers the Umbrian towns along Ferrovia Appennino Centrale and two towns on the line which from Foligno reached Fossato di Vico. 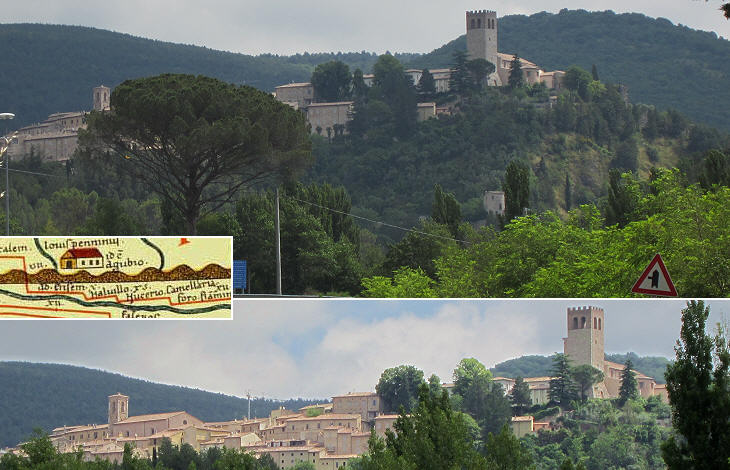 Views of Nocera; (inset) "Tabula Peutingeriana", a Vth century map of the roads of the Roman Empire showing Via Flaminia (orange line), the Apennines mountains and "Nuceria Camellaria"

Via Flaminia is an ancient road which was built in the late IIIrd century BC to secure the expansion northwards of the Roman Republic. It crossed the Apennines divide between the valleys of the Topino and Candigliano rivers. The Topino empties into the Tiber and its long upper valley retains traces of the ancient road, as well as being crossed by a modern highway. Nuceria Camellaria, the main town of the valley, was located near the river and it was rebuilt on a hill during the Middle Ages when it became an important centre of the Longobard Duchy of Spoleto. 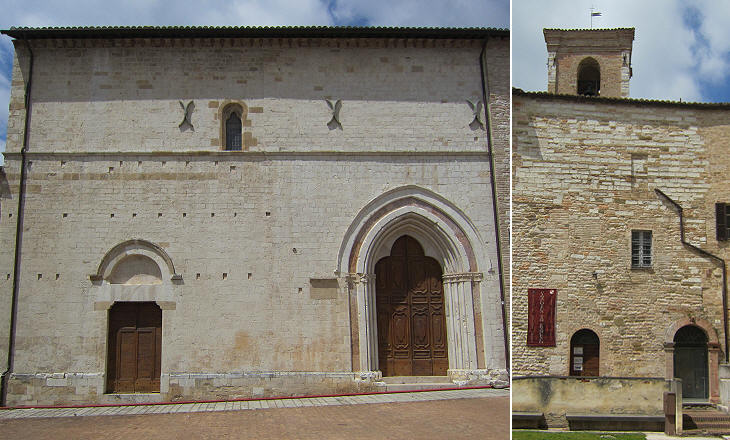 Monte Subasio separates Nocera and the Topino valley from Assisi, the town of St. Francis. A Franciscan monastery was already established at Nocera before 1248 when Emperor Frederick II seized and destroyed the town which supported the Pope. The monastery was rebuilt at the beginning of the XIVth century and the portal of its church was decorated with a pink stone which was quarried at Monte Subasio and which can be seen at Assisi, Foligno and other Umbrian towns. 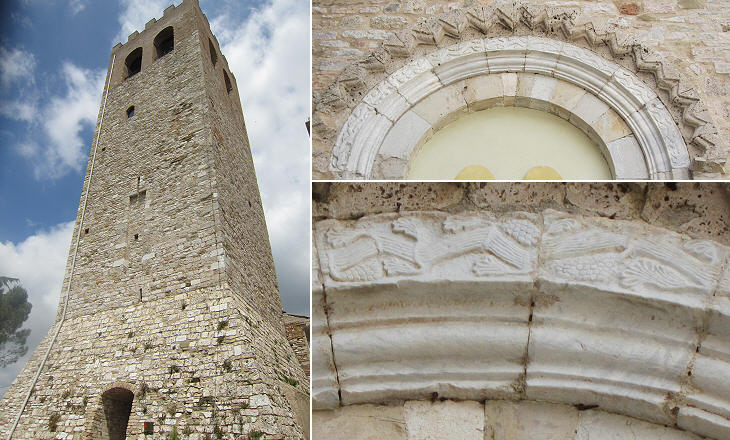 (left) Torre Civica; (right) details of the portal of the Cathedral

Only the main tower of the medieval castle was spared by Emperor Frederick II and it was turned into a second bell tower of the adjoining Cathedral, because Nocera, notwithstanding its small size, was a bishopric seat and its large diocese included many parish churches on the other side of the Apennines. In 1986 the diocese of Nocera was incorporated into that of Assisi. The official name of the town is Nocera Umbra to distinguish it from towns by the same name near Naples (Nocera Inferiore and Nocera Superiore). 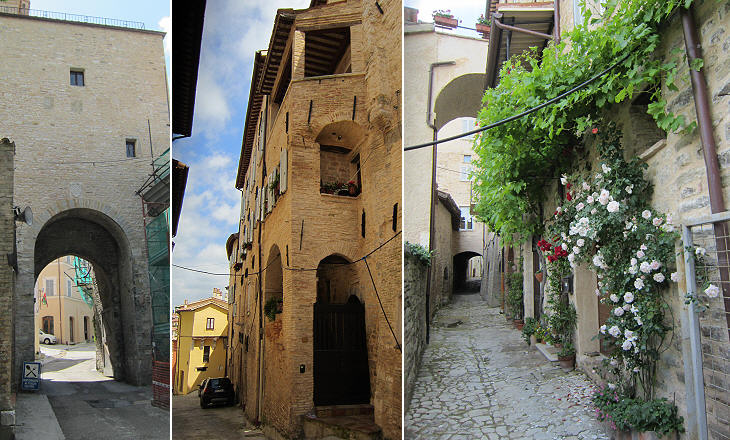 In general the Apennines are a highly seismic area and in 1997 Nocera was struck by a major earthquake, the effects of which can still be seen by walking in its medieval part. Norcia and Cascia are other Umbrian towns which have been struck by major earthquakes. 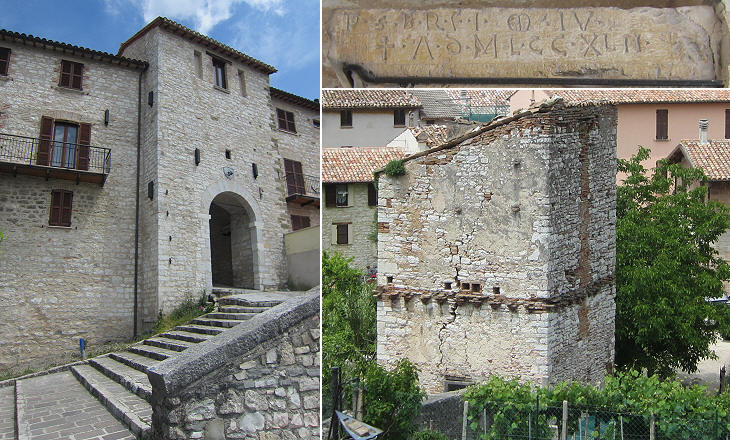 Wald is a German word meaning forest and Gualdo is the name of some small Italian towns and villages, mainly in areas which were a Longobard possession. Tadino derives from Tadinum, a very ancient town, which similar to Nocera was located in the plain. After Tadinum was repeatedly destroyed a new settlement was built around a Benedictine abbey on a nearby hill covered by wood (hence Gualdo).
Emperor Frederick provided the new settlement with walls of which a small section including the main gate can still be seen. 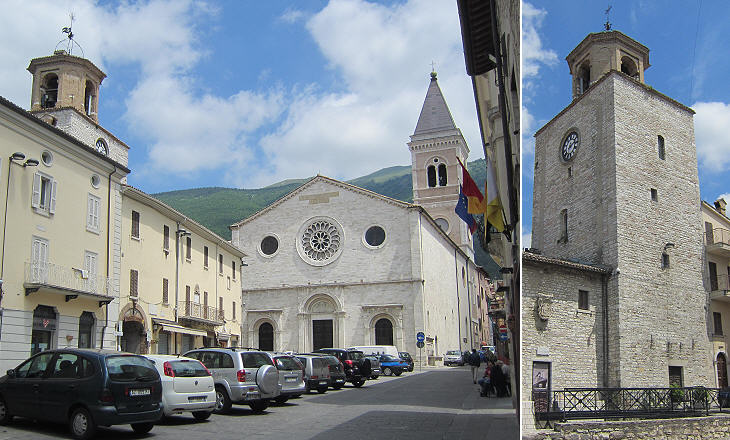 Gualdo Tadino was only partially impacted by the 1997 earthquake, but the design of the town is the result of its reconstruction after a major earthquake in 1751, which was followed by another one in 1832. Many medieval monuments such as the Town Hall are almost entirely lost. The bell tower of S. Benedetto was built in 1914 to replace the previous one which was about to collapse. 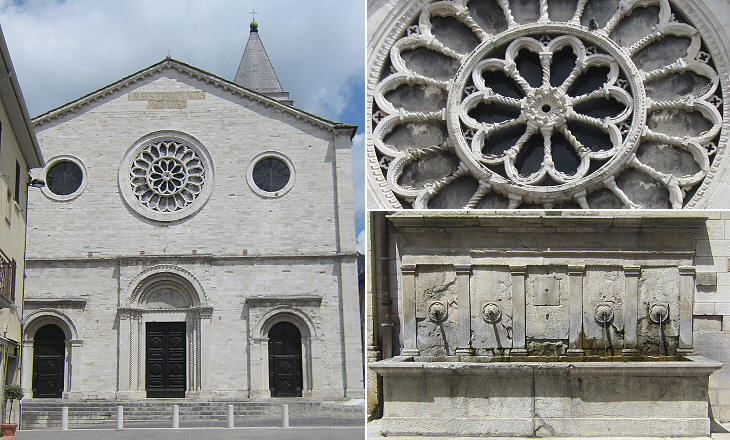 S. Benedetto: (left) façade; (right-above) rose window; (right-below) Fontana del Cardinale on the side of the building. This Renaissance fountain was decorated with a coat of arms of Cardinal Ciocchi del Monte (future Pope Julius III) which was temporarily removed when the photo was taken in 2013

The interior of S. Benedetto was largely renovated in the XVIIIth and XIXth centuries, but its façade was restored "as it was" in 1752, immediately after the earthquake. The church was built in 1258 and it retains an elaborate rose window which is attributed to sculptors from Northern Italy. 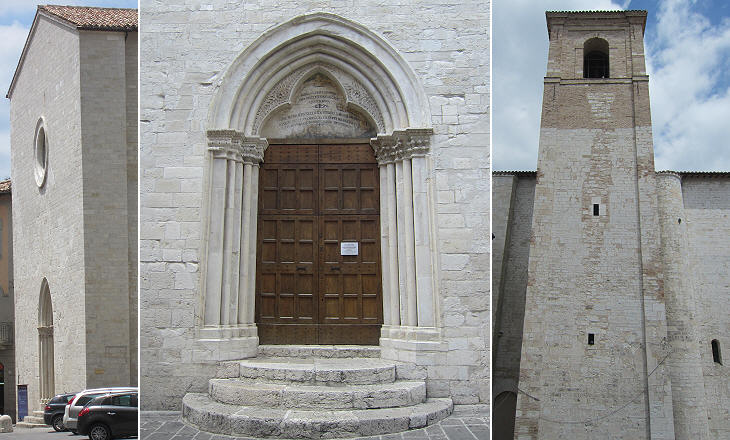 S. Francesco is located in the main square too, but it has a different orientation with the plain façade along the main street of the town. The portal has a three-foiled cusped arch, a pattern which is not very common in Umbria, but can be seen at Nocera too. The church was adjoined by a cloister which was eventually pulled down to make room for the main square. The building is dated XIIIth century, but its bell tower was added in the XVth century. 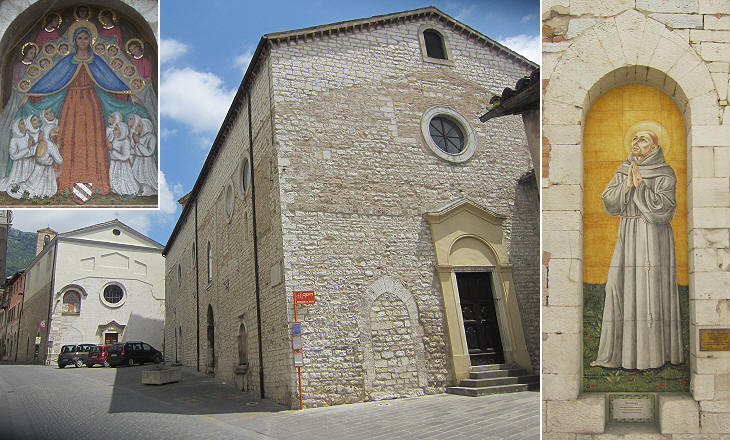 The high number of churches in towns of the Papal State is explained by the many religious brotherhoods which took care of supporting the poor. Today "raccomandato" usually means someone who has found a job because of friends in high places, but at Gualdo the word was used to indicate the orphans entrusted to a charity.
"Porta del Morto" (Door of the Dead) is the gruesome name of a small door next to the main one in medieval buildings in Umbria, Tuscany and northern Latium (in Rome there is a "Porta del Morto" near Collegio Nazzareno). The name is due to the fact that the dead left their homes through this small door, rather than from the main one. Actually in order to access the family rooms directly it was necessary to use the "Porta del Morto" then go up a straight wooden staircase. The main door led to a warehouse, workshop or a stable linked to the upper floor by a winding staircase. 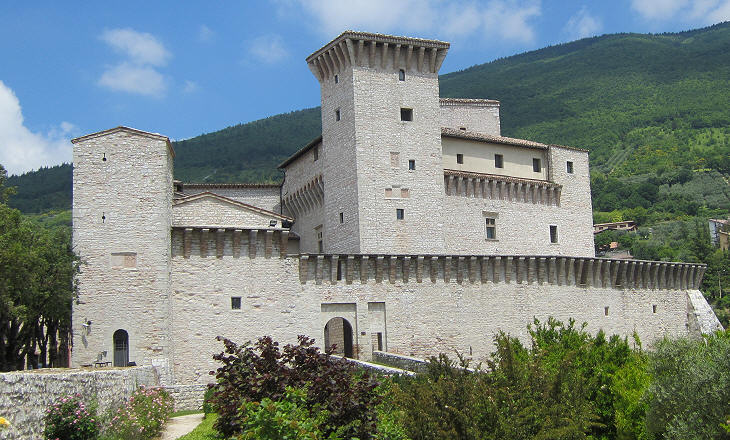 The fortifications of Gualdo were completed by Rocca Flea which stands at the top of the town. The complex was built in various periods and in the XVIth century it was provided with apartments for the papal governors. For a long time it was used as a prison until in the 1990s it was turned into a civic museum which houses many majolica plates and vases for which the region, including towns across the Apennines, is known. You may wish to see a page on other papal fortresses. 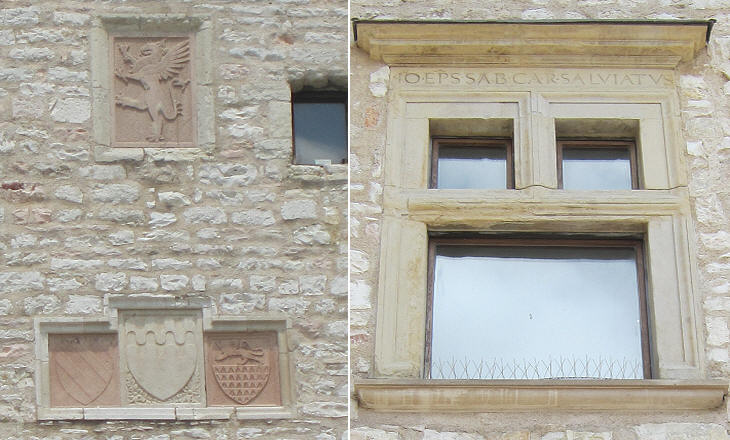 Rocca Flea: (left) coats of arms including that of Perugia (above); (right) Renaissance window bearing the name of Cardinal Giovanni Salviati, a nephew of Pope Leo X and Legate (governor) of Umbria in 1543-1553

The image used as background for this page shows a relief on the Torre Civica of Gualdo Tadino portraying an angel protecting the coat of arms of the town.