Collegio Nazzareno
(Vasi at work in the Grand View of Rome)

Links to this page can be found in Book 9, Map B2, Day 3, View C6, Rione Colonna and Rione Trevi. 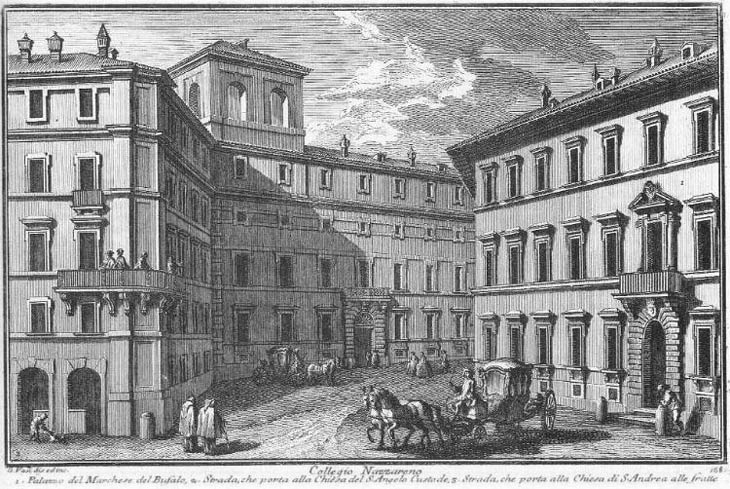 In 1759 Giuseppe Vasi dedicated his ninth book of Roman views to a series of very different buildings (schools, hospitals, houses for the poor and the old, etc.) which in general do not fall into the category "The Great Monuments of Rome", yet these views help in understanding how a minimum of welfare protection was provided to the inhabitants of XVIIIth century Rome.
The view is taken from the green dot in the 1748 map below. In the description below the plate Vasi made reference to: 1) Palazzo del Bufalo; 2) Street leading to Chiesa dell'Angelo Custode; 3) Street leading to S. Andrea delle Fratte. The map shows also 4) Collegio Nazzareno (today Nazareno); 5) Ruins of Acquedotto dell'Acqua Vergine; 6) Chiesa dell'Angelo Custode; 7) S. Maria di Costantinopoli; 8) S. Giovanni dei Maroniti; 9) S. Nicola in Arcione. The dotted line in the small map delineates the border between Rione Colonna (upper half) and Rione Trevi (lower half). 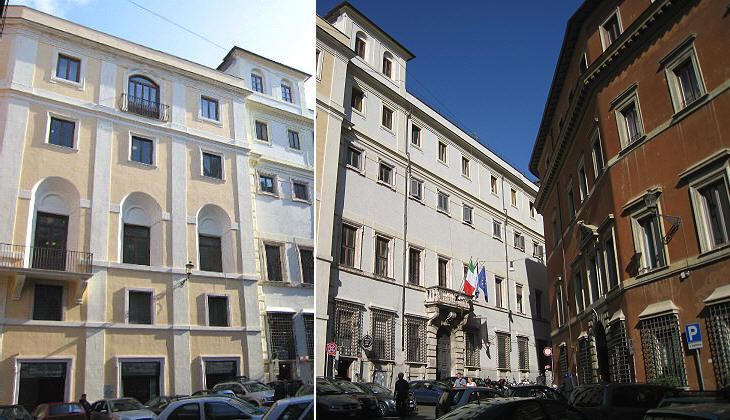 In the 1950s the left wing of Collegio Nazareno was aligned to the older part of the building in order to enlarge the street; apart from this change and an added storey above the cornice of Palazzo del Bufalo, this corner of Rome has retained its original appearance, whereas the area immediately behind the two palaces was impacted by major changes in the late XIXth century and in the 1920s because of the enlargement of Via del Tritone. 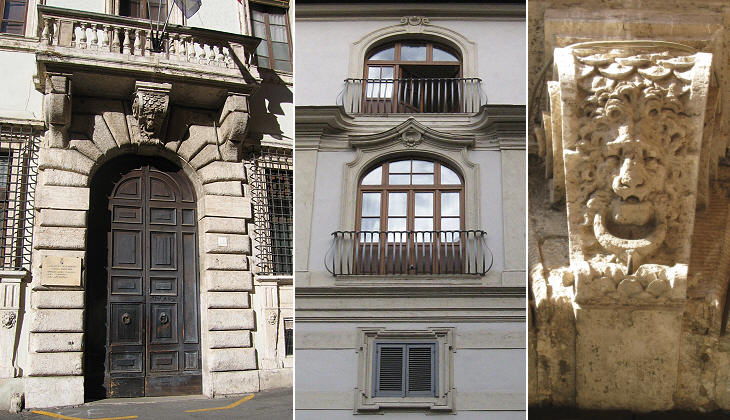 (left) Portal; (centre) windows in Via del Tritone; (right) heraldic symbol of Alessandro Maurelli (also in the image used as background for this page)

The Scholae Piae in Rome, a company of good Religious Men, who look like Jesuits only that they go bare foot in Sandals. These good Fathers make a profession to teach poor boys gratis, their first Grammar Rudiments to make them fit to be sent to the Jesuits Schools and having taught them thus in the Schools, they accompany them home in the Streets, lest they should either learn waggery as they go home, or practice it. Nay these humble Men make it their profession not to teach higher Schools, where there might be some profit and honour, at least some satisfaction and pleasure: but they content themselves to go barefoot, and teach only the lower Schools and first Rudiments; by which they neither grow wiser nor richer.
Richard Lassels' The Voyage of Italy, or a Compleat Journey through Italy in ca 1668
The college is named after its founder, Cardinal Michelangelo Tonti, Archbishop of Nazareth, who because of this title was known as Cardinal Nazareno. Actually Cardinal Tonti was Archbishop of Barletta, a town in southern Italy, where a church was dedicated to S. Maria di Nazareth in memory of an archbishop of Nazareth in Palestine who sought refuge in Barletta in the XIIIth century.
Cardinal Tonti bought the palace in 1622, the year of his death, with the purpose of bequeathing it to a new college for the poor to be managed by the Piarists, an order founded by St. Joseph Calasanz and approved by Pope Gregory XV in that same year. The Piarists had begun their charitable activity in 1597 in the sacristy of S. Dorotea. The will of Cardinal Tonti was challenged by members of his family and the college was able to move to its expected location only in 1689.
The palace was built in the late XVIth century by Alessandro Maurelli, a nobleman from Parma.

(left) Bust of an emperor (Caracalla ?); (centre) painting by il Baciccio (you can see it in an enlarged and edited image - it opens in another window) ; (right) another bust of an emperor

In order to face a difficult financial situation Collegio Nazareno enlarged its scope by accepting children of wealthy families. The Piarists (who ran also Collegio Calasanzio) were known for giving a more open-minded education than other religious orders and Collegio Nazareno soon became a very prestigious school. This development was favoured by the foundation of Accademia degli Incolti, an academy which was supported and managed by the parents of the students and which had the aim of promoting the knowledge of classical literature. The rules of the academy established the donation to Collegio Nazareno of works of art (usually paintings) having a motto, a short phrase encapsulating an ideal. One of the finest paintings still owned by Collegio Nazareno is a work by il Baciccio (Giovan Battista Gaulli), the late XVIIth century painter known for the ceiling of il Gesù, who was a member of the academy. 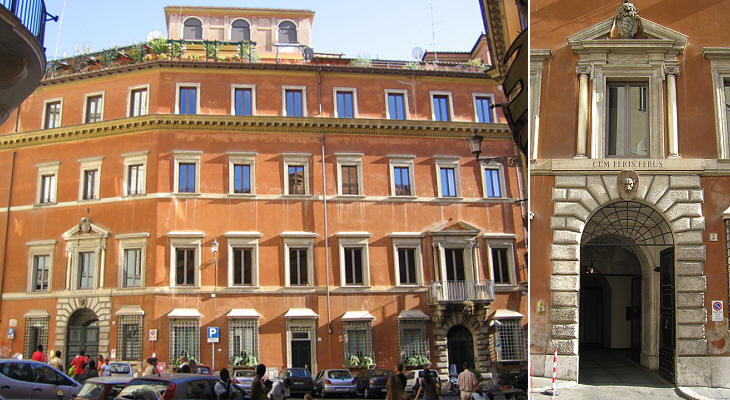 The palace was built in the XVIth century, but it was modified in the following one. The del Bufalo acquired importance during the pontificate of Pope Innocent X (1644-1655), whose mother was a del Bufalo. It was probably during this period that the entrance opposite Collegio Nazareno was designed. The Del Bufalo had another palace at Piazza Colonna and a chapel at S. Maria in Via.

(left) Coat of arms of the del Bufalo; (centre) S. Andrea delle Fratte: tip of the bell tower designed by Francesco Borromini; (right) motto on the entrance opposite Collegio Nazareno 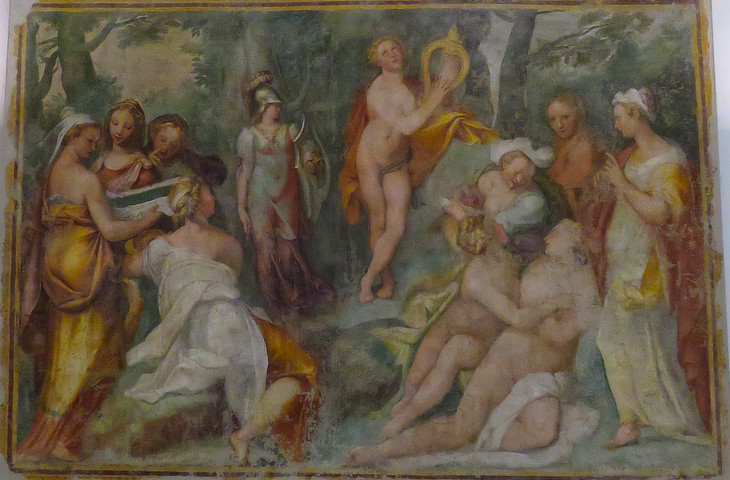 The palace had a garden with a painted nymphaeum and a small casino which were demolished for the enlargement of Via del Tritone. Some frescoes from the casino were detached. The graffito frescoes by Polidoro da Caravaggio were recently carefully restored (you may wish to see one of them which portrays Perseus and Andromeda - it opens in another window - or the painted façade of Palazzo Ricci, another work by this painter). 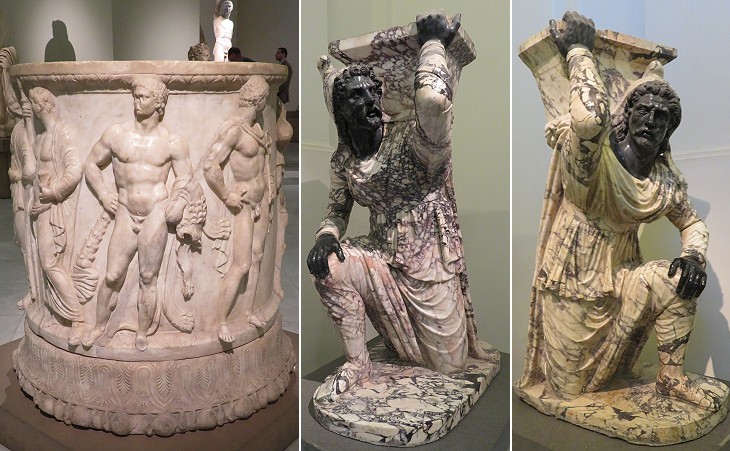 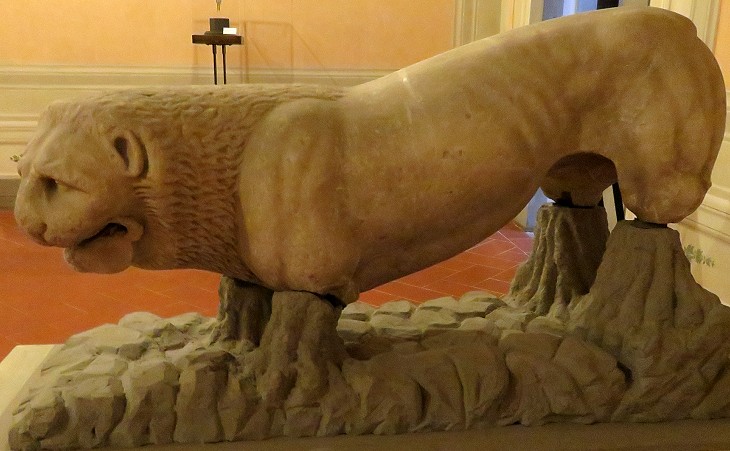 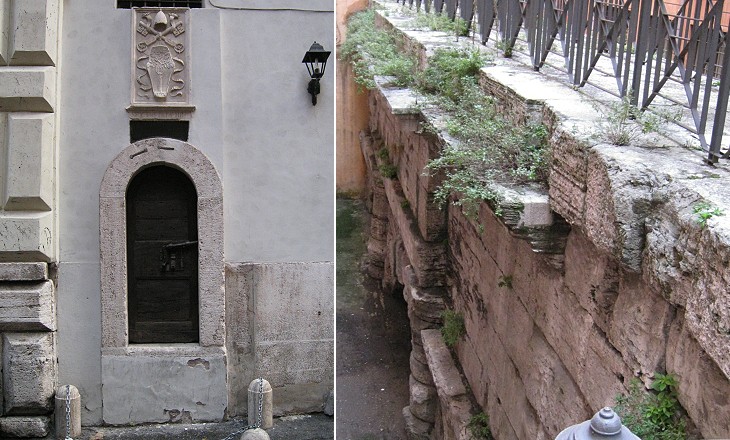 (left) Door giving access to the aqueduct and above it coat of arms of Pope Sixtus IV (in northern Latium and Umbria similar doors are called "Porta del Morto" - Door of the Dead); (right) arch of Acqua Vergine

In the street leading to the lost church of Angelo Custode there is a small door with the coat of arms of Pope Sixtus IV which celebrates the restoration of Acqua Vergine, an ancient Roman aqueduct which ended at Fontana di Trevi. The aqueduct was very low (its arches are almost buried in the ground) so it was of no use for the part of the city on the hills. Opposite the door it is possible to observe the upper part of a travertine arch of the aqueduct; it has an inscription celebrating Emperor Claudius (you may wish to see it in an etching by Giovanni Battista Piranesi - it opens in another window). Another inscription celebrating Claudius was found in the section of the aqueduct near Palazzo Sciarra. 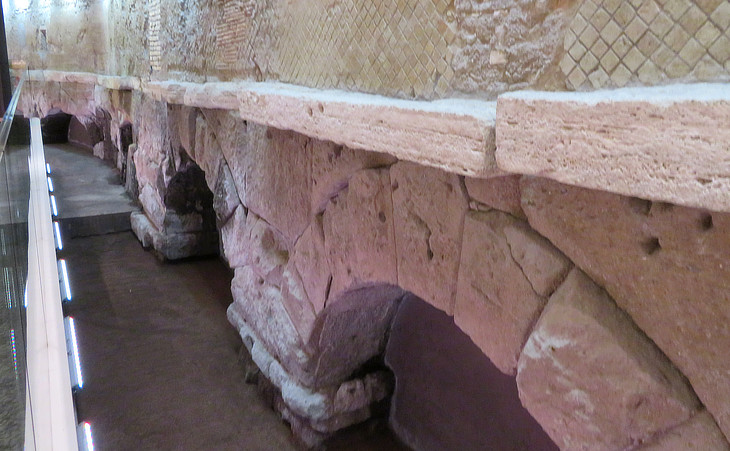 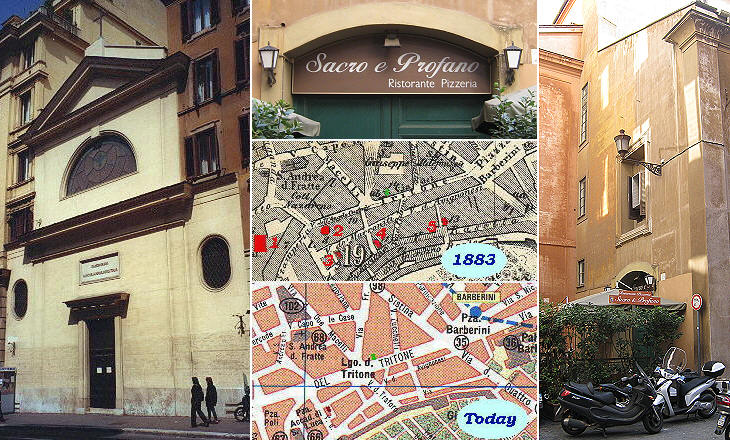 The church of S. Maria di Costantinopoli has an 1817 façade: in 1799 the troops of Ferdinand I, King of the Two Sicilies (Sicily and Naples), forced the French out of Rome and celebrated their victory in this church which belonged to the Sicilian Nation in Rome (you may wish to see a directory of national churches in Rome). When the French returned to Rome they retaliated by raiding and deconsecrating the church which was restored by Pope Pius VII. The reference to Constantinople is due to a sacred image which was worshipped in that city.
Today Via del Tritone is an important street which links Piazza Colonna with Piazza Barberini (where Fontana del Tritone is located); in the XVIIIth century is was shorter and narrower. Its enlargement together with the opening of a tunnel (il Traforo) under the Quirinale Hill led to many changes in the area near Collegio Nazareno. Part of Palazzo Poli (the palace behind Fontana di Trevi) and the churches of S. Nicola in Arcione and Chiesa dell'Angelo Custode were demolished. 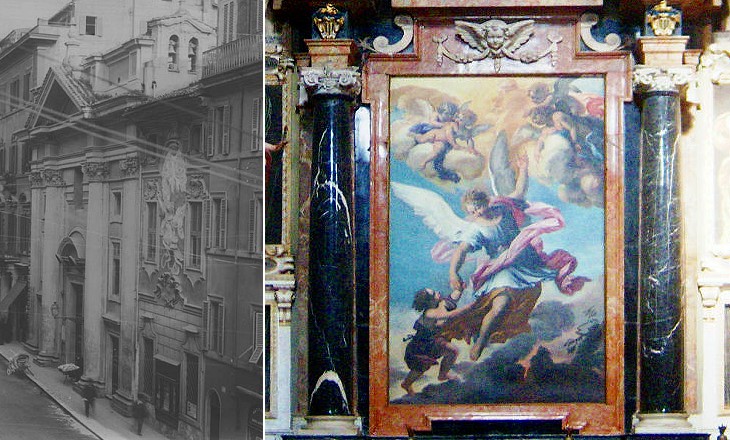 (left) Chiesa dell'Angelo Custode before its demolition in 1928 (façade by Mattia De' Rossi); (right) painting by Giacinto Brandi (best known for his works at S. Carlo al Corso) on the main altar (it is now in Novara)

I stept into the Colledge of the Maronites, in whose Church I heard them singing Mass in their own language, and after their own rites, as the Christians of Mount Libanus have immemorably used to do. Their language is Arabic, and they have always kept themselves free from Heresies; and in Union with the Roman Church, these five Hundred years. Lassels
Two other small churches which existed at Vasi's time are lost: during the French occupation of Rome S. Maria della Neve was pulled down and S. Giovanni dei Maroniti (you may wish to know more about St. Maroun) was deconsecrated. A new church was dedicated to St. Maroun in 1914.

Most of the palaces along Via del Tritone were designed after the enlargement of the street, whereas the side streets retain some XVIIIth century buildings.