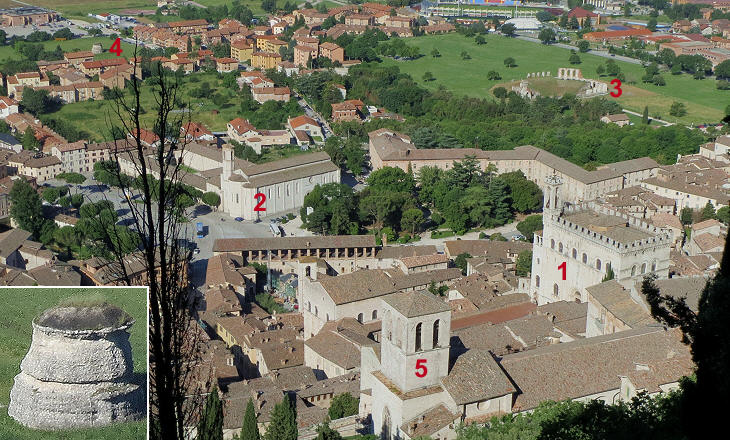 Dante mentioned the hill where St. Ubald spent some years as a hermit in order to describe the position of Subasio, a large mountain near Assisi, the hometown of St. Francis. The view from the hill provides an excellent opportunity to understand the location of Tota Ikuvina, the town founded by the Umbri and of the Roman and medieval towns which replaced it.
The Umbri were an Italian tribe whom Pliny the Elder thought was the oldest one living in Italy (Umbrorum gens antiquissima Italiae existimatur - Naturalis Historia - III). Their town occupied the lower part of the hill and a small flat area beneath it from Palazzo dei Consoli (1) to S. Francesco (2). The Roman town expanded in the plain where a theatre (3) and evidence of other buildings have been excavated. The mausoleum (4) was outside the pomerium, the official boundary of the town, but probably not very far from it. The inhabitants abandoned this neighbourhood after the fall of the Roman Empire. In the XIIth/XIIIth centuries Gubbio experienced a period of economic growth and it was enlarged by including another portion of the hill where a new Cathedral (5) was completed in 1229. 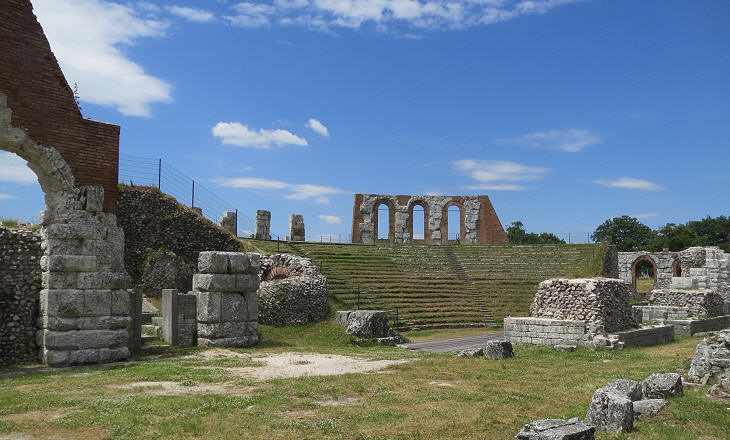 The theatre was built in the Ist century AD, when, as a result of the Hellenization process of the Roman society, theatre going became popular. The Roman Senate had opposed this form of entertainment for a long time as not suited for the austere way of living of the Romans during the Republic, but after Pompey and Augustus provided Rome with theatres, all provincial towns felt they should have a theatre too. 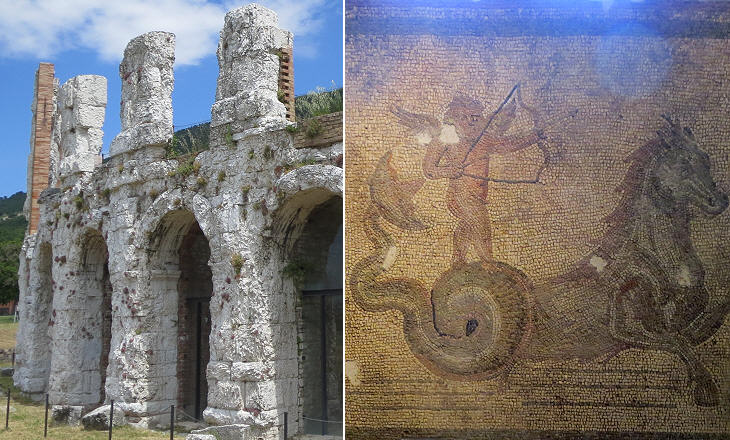 (left) Roman Theatre; (right) detail of a mosaic found at a villa in the countryside

There was no lack of hills near Gubbio on the slope of which a theatre could be excavated as the Greeks used to do, but the advanced Roman construction techniques did not require such a natural advantage. The estimated audience of the theatre is 6,000. In summer it is temporarily covered by scaffoldings to house events, such as ballets.
The mosaics found near Gubbio are dated IInd or IIIrd century AD; although the town is very far from the sea, the mosaics had marine subjects, similar to those which can be seen at Terme di Caracalla or at Ostia, the harbour of Rome. 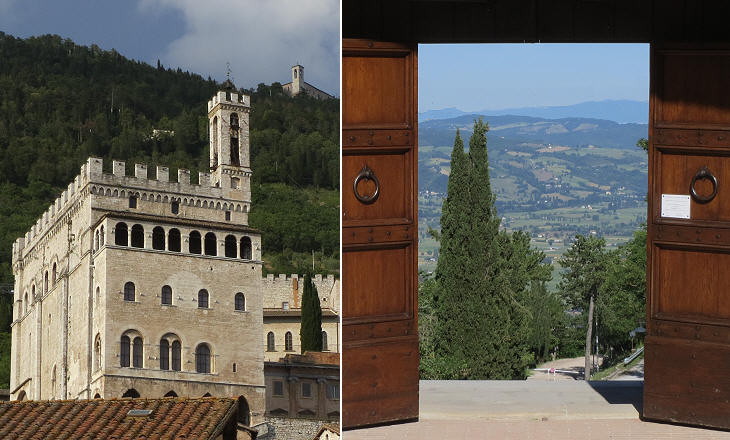 (left) Palazzo dei Consoli and S. Ubaldo at the top of the hill; (right) a rewarding view from S. Ubaldo

In the early XVIth century a monastery dedicated to St. Ubald and which houses his tomb was built on the site of a small medieval church. The long uphill walk provides commanding views of the town and its countryside. St. Ubald was a member of the Baldassini family, one of the most important families of Gubbio in the XIIth century. He was appointed Bishop of Gubbio in 1129 and his authority was not limited to religious matters as he was asked to help in running the town. 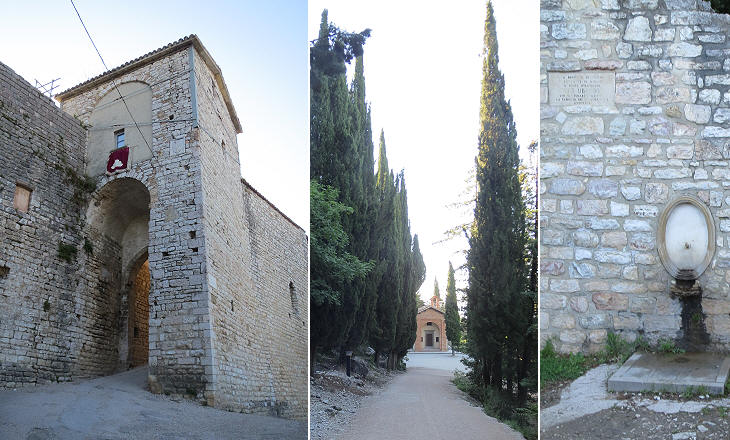 A fountain along the road to S. Ubaldo was the site of a miracle by the saint which explains why the people of Gubbio pray to him for the safety of their town. In 1419 the inhabitants were fleeing to the hill, because Braccio da Montone, a warlord who at the time ruled Perugia, and his troops had taken the town by surprise. The fugitives met St. Ubald at the fountain and were told to go back because Braccio and his men were about to leave Gubbio without plundering it. They did so and actually the invaders had gone. The miracle calls to mind that of Domine Quo Vadis in Rome. 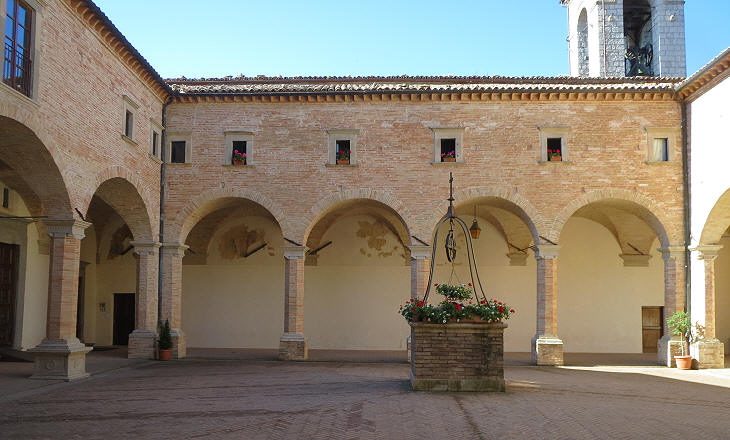 The church of the monastery was enlarged in 1916-1922 and it lost most of its historical interest, whereas the plain but elegant 1527 courtyard was untouched. The monastery belonged to the Canonici Regolari Lateranensi until 1816 and then to the Franciscans until 2013. Currently the complex is directly run by the Bishop of Gubbio and part of the monastery is open to those who want to spend a period of rest and prayer. 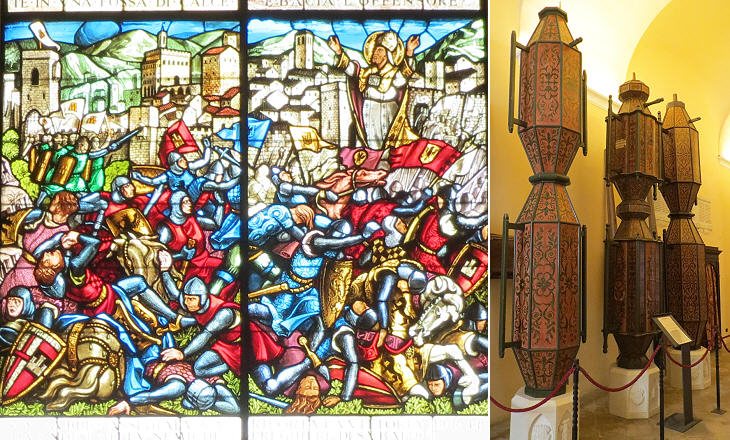 In 1921 Francesco Mossmeyer, a glassmaker who had a workshop in Florence, made nine large glass windows to decorate the new church. He was asked to portray events of the life of the saint and in particular the role St. Ubald had in the defence of Gubbio in 1151 when it was sieged by a coalition of eleven Umbrian towns. The Bishop asked his fellow citizens to observe three days of penance and then he ordered them to make a sally which routed the enemies. Among the fallen one can see soldiers from Città di Castello who had the Holy Cross on their shields.
The Italian Comuni (city-states) were constantly at war with each other. This belligerent mood continued within the walls of the town and eventually was at the root of games, races and other events during which the quarters of the town competed in a peaceful way for a symbolic supremacy. Palio di Siena is the best known of these events, but other towns including Gubbio have similar races. Cero is the Italian word for a large votive candle. Because of their shape it is given to three wooden structures upon which statues of St. Ubald, St. George and St. Anthony are placed on May 15, the vigil of St. Ubald's death in 1160. 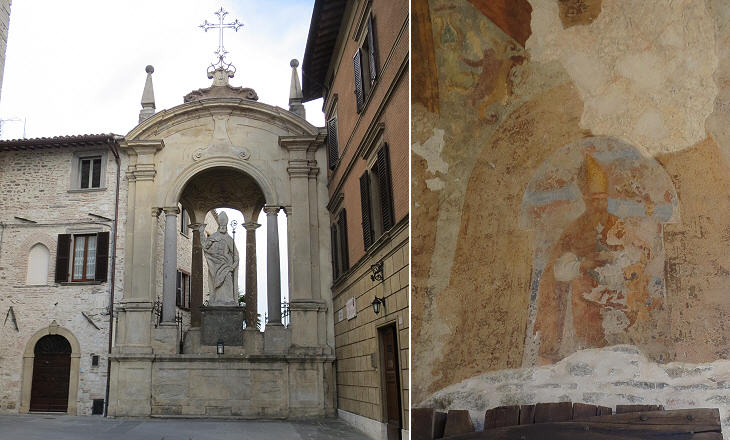 The ceri are carried through the narrow streets of Gubbio by three teams at a very speedy pace and eventually a monument to St. Ubald was erected at a point where the street turns after a steep descent and where often the teams lost their balance. In the last part of the event the ceri are brought back to S. Ubaldo. According to an always respected tradition the statue of St. Ubald is the first to enter the church.
Migrants from Gubbio have introduced a St. Ubald's Day at Jessup, Pennsylvania. 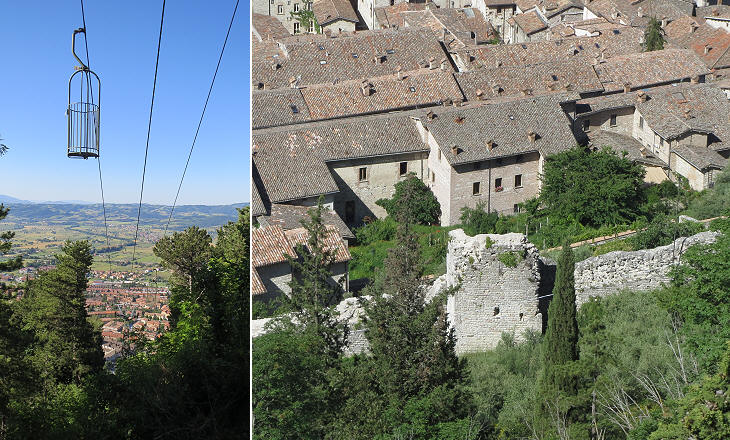 (left) A cage of the aerial lift; (right) view of the walls of Gubbio on the mountain side from the cable car

An aerial lift provides an alternative to the long walk to S. Ubaldo (boarding the small cage is rather easy, but leaving it is trickier because the cage is linked to a continuously circulating steel cable) and it offers fine views of the medieval walls which were built approximately at the time of St. Ubald and marked the expansion of the town on the slope of the hill, the reason why Gubbio does not lack steep streets. 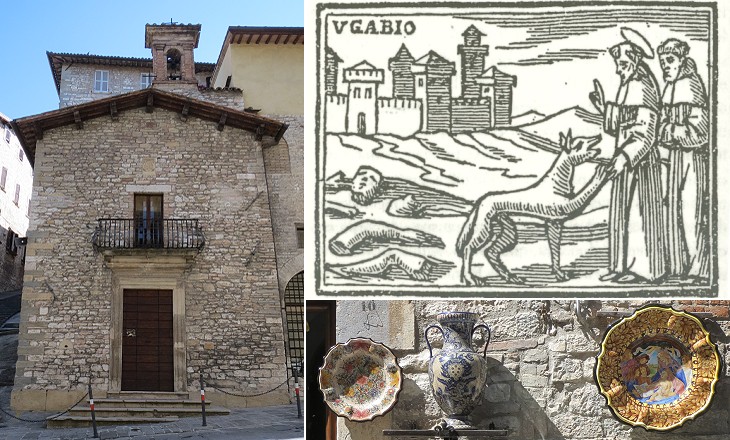 A wolf who had long ravaged the surrounding country was rebuked by St. Francis, who promised it a peaceful existence and daily food, if it would amend its ways. The wolf agreed to the compact, and placed his right paw in the hand of St. Francis in token of confidence and good faith. "Brother Wolf," as St. Francis called him, lived afterwards tamely for two years at Gubbio, in good fellow- ship with all, and finally died, much regretted, of old age.  From the "Fioretti di S. Francesco."
When I was a boy of seven, I knew nothing about Gubbio, but I was familiar with its wolf, a miracle by St. Francis which was told to children together with other tales involving wolves.
A small church was built at the cave where Brother Wolf spent its last years. I vainly looked for a modern vase or dish depicting the miracle, but perhaps today children are interested in other tales and objects with such a subject would not find buyers. 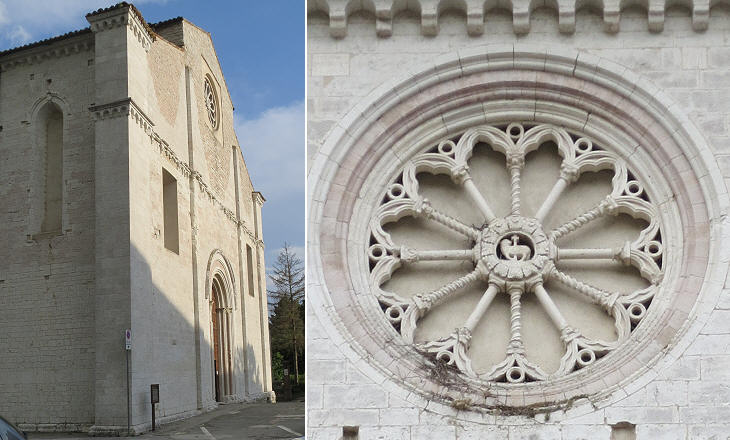 According to Franciscan tradition, St. Francis after having left his home, his parents and his elegant clothes, in 1206 came to Gubbio where he was housed by the Spadalonga, a wealthy local family who provided him with a tunic. By 1255 a church and a monastery were built on the site of the Spadalonga house. The church was redesigned in the XVIIIth century and its façade is the result of a later modification aimed at making it look more medieval. 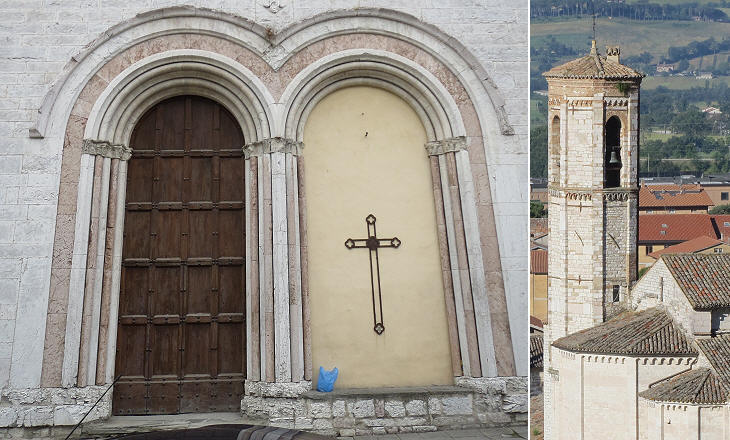 The image used as background of this page shows a Roman funerary inscription placed on a medieval building.