About another hour's drive (from Città di Castello) through the rain brought us to the extremely picturesque bridge and gateway of Fratta, with its town-wall of weather- stained brick, descending sheer into the river.
Thomas Adolphus Trollope (brother of novelist Anthony Trollope) - A Lenten Journey in Umbria and the Marches - 1862
Ancient chronicles referred to the small town as Fracta filiorum Uberti (Fratta founded by the sons of Uberto), a ruler of Tuscany and Umbria in the Xth century. Because Fratta was not the only town by this name in the Kingdom of Italy established in 1861, two years later the inhabitants decided to rename it Umbertide in memory of its founders and as a gesture of courtesy towards Umberto, the Crown Prince.
The tall tower of the small fortress was built in the XIVth century and the two round bastions were added in the XVIth century. 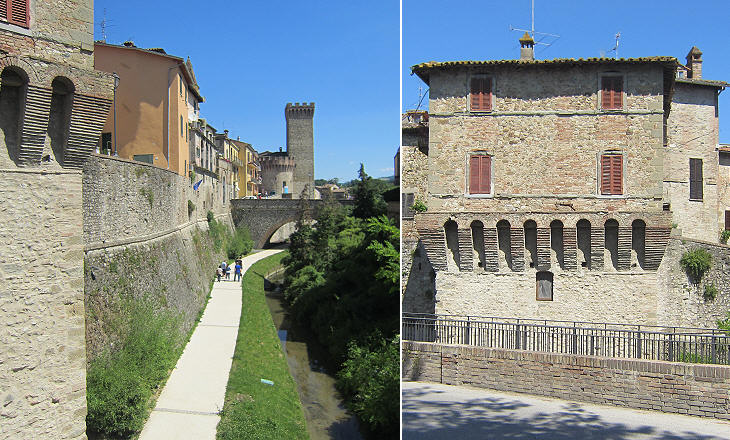 Walls along the Reggia

The small town was founded on a narrow strip of land between the River Tiber and the Reggia, a small stream which runs parallel to it, before emptying into it. The two rivers provided Umbertide with a natural defence which was strengthened by walls and bastions. In 1944 the town was bombed and its medieval bridge and the nearby buildings were destroyed. A wooden dam on the Tiber made the water level rise enough to fill the moats along the walls. Umbertide is surrounded by hills, many of which have a small castle or a tower at their top. In the XIIIth/XIVth centuries this system of fortifications was meant to protect Perugia, the main town of Umbria. The image used as background for this page shows a relief at the entrance to the fortress which depicts a gryphon, the symbol of Perugia. 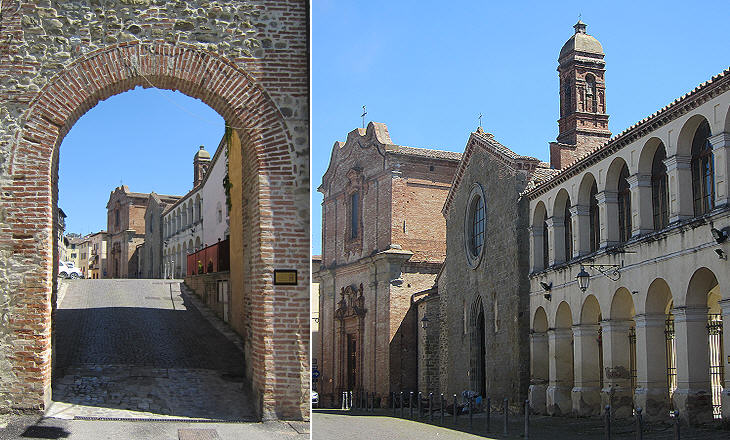 In addition to the impact of WWII bombs the urban layout of Umbertide was affected by the opening of a modern road across the town which has isolated Borgo Inferiore, a small neighbourhood which was an enlargement of the initial settlement.
Today S. Croce is a small museum which houses a famous Descent from the Cross by Luca Signorelli.
The sole interesting thing to see at Fratta, besides its pretty and picturesque situation on the banks of the Tiber is a really fine picture, a Descent from the Cross, by Luca Signorelli in the little Church of the Santa Croce. Attempts had been made, it seemed, to purchase this picture from the confraternity to which it belongs; and I was struck by the remarks made on these unsuccessful offers by one of the principal inhabitants of the little town in speaking on the subject. "It would be a great pity," he said, " to part with the only thing of value the town contained, because then there would be absolutely nothing to call foreigners thither!" (..) Its whole and sole value, in his eyes, consisted in the possibility that it might be the means of causing his little town also to share in the gold-deposit left by the tide of travellers that is continually passing over Italy. Trollope 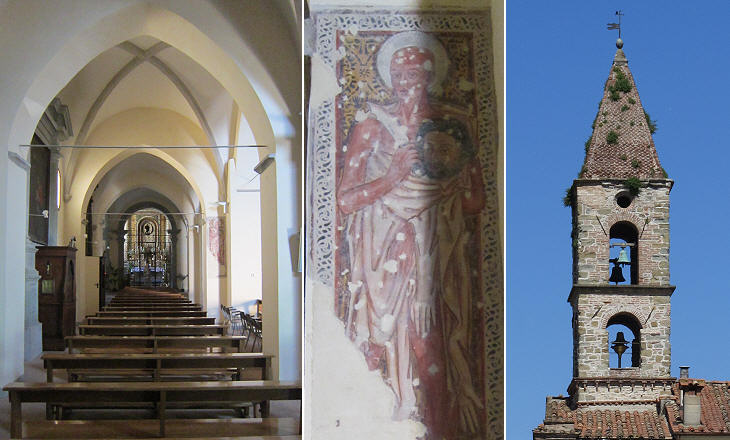 Borgo Inferiore developed around a Franciscan monastery; its main church was dedicated to St. Francis of Assisi and it was built in the late XIIIth century. It was enlarged by the addition of a second minor nave in Gothic style. The bell tower is the only memory of S. Giovanni Battista, an old church which was hit by bombs in 1944. 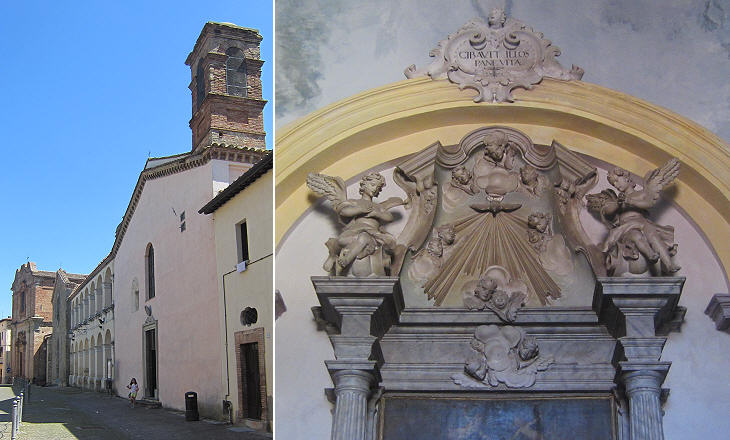 (left) S. Bernardino and the other two churches; (right) detail of an XVIIIth century altar

St. Bernardino was a XVth century Franciscan monk and according to tradition he founded an oratory adjoining the Franciscan monastery which was eventually dedicated to him. The presence of three churches in a row in a small neighbourhood is due to the fact that they had different purposes, but it amazes the modern viewer. 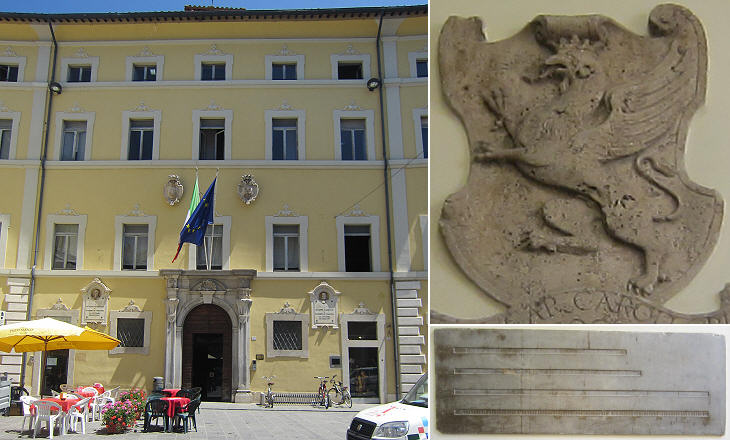 (left) Palazzo Comunale (Town Hall); (right-above) the symbol of Perugia; (right-below) local measures of length in the XIXth century compared to the meter (the lowest one)

In the XVIIIth century a wealthy local noble family built a palace which stood out among the modest dwellings of Umbertide. In the XIXth century it was turned into the Town Hall. It houses some interesting reliefs on the history of the town.