were soon over!
(relief showing the coat of arms of Pope Julius III in Palazzo Spada)

Pope Julius III (Giovanni Maria de' Ciocchi del Monte) has little place in history or in theology and he is almost forgotten. His Villa Giulia in Rome is by most people associated with Pope Julius II (the background shows a detail of the decoration of a window). As a Pope (1550-1555) he behaved like a true Renaissance prince, but the times of Pope Leo X were gone!

Cardinal in Gualdo Tadino and Pope in Spello 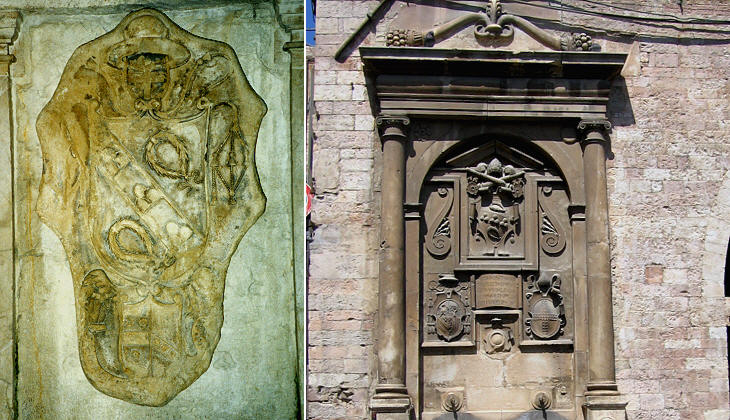 Gualdo Tadino is a small town in Umbria where Julius III stayed during the time he was a Cardinal and here his coat of arms could be found in the central fountain until a few years ago. The artist was not a master! A few years later Spello, a nearby town, had a new fountain right in the main square: it was a gift by the new pope: Julius III. Bologna was the second city of the Papal State but retains very few coats of arms, because in 1797, under the influence of the French Revolution, all signs of the Popes were destroyed. Yet the façade of Palazzo Comunale still shows, disguised as decorations, the symbols of Julius III. Perugia, although formally belonging to the Church was ruled for centuries by local families. In 1534 Pope Paul III fought to bring once more Perugia under the rule of the Church and after he had succeeded in his objective he erased the houses of the Baglioni (the local rulers) and had Antonio da Sangallo erect on the same spot a fortress (Rocca Paolina) ad coercendam Perusinorum audaciam, not for the reason of protecting Perugia from external threat but to ensure it would not revolt again. He also deprived Perugia of self-government and trading rights. Julius III gave back these authorities and in 1555 Perugia celebrated his mercy with a statue by Vincenzo Danti next to Fontana Maggiore. While Rocca Paolina was pulled down and the symbols of Paul III erased when Perugia revolted in 1848, no harm was done to the statue of Pope Julius III. 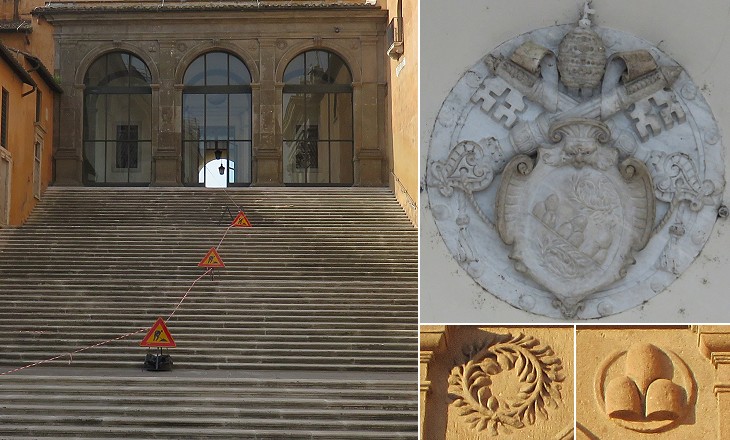 Pope Paul III had Michelangelo involved in the redesign of Piazza del Campidoglio. The project included a new entrance (through a loggia) to the Franciscan Monastery of S. Maria in Aracoeli. Julius III built a new entrance to Palazzo dei Conservatori which matched the entrance to the monastery and the ceiling of the loggia shows his coat of arms.

Coats of arms in the gardens of Castel Sant'Angelo

One of the greatest worries of the Popes after 1527 was to strengthen the defence of Rome and Castel Sant'Angelo was seen as key to the Pope's personal security. The gardens which today surround the old fortress retain these splendid signs of Pope Julius. 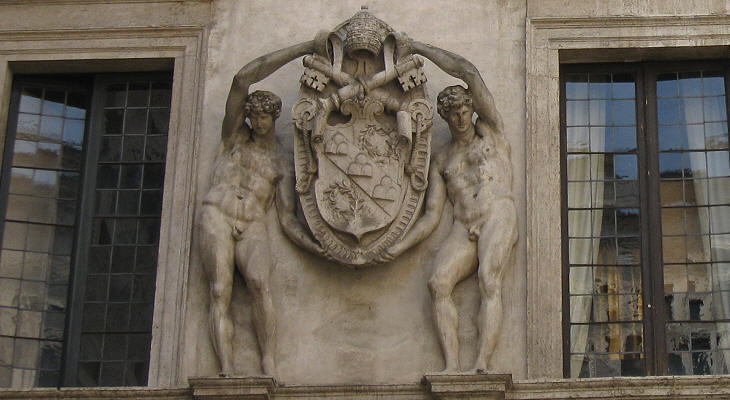 The inner court of Palazzo Spada near Palazzo Farnese is decorated in the least religious manner. Everything reminds of the pleasures of life, including the young men holding the coat of arms of the Pope!