- SS. Annunziata in Florence
(western side of the square)

In the early XVth century Florence was one of the most prosperous cities of Europe. Its economy was based on a strong textile industry and on an effective banking system supported by a reliable gold currency (florin).
Merchants and artisans were grouped in powerful guilds: in 1421 Arte della Seta, the Silk Guild, decided to contribute to the well-being of the Republic by founding Spedale degli Innocenti, probably the first foundling hospital. 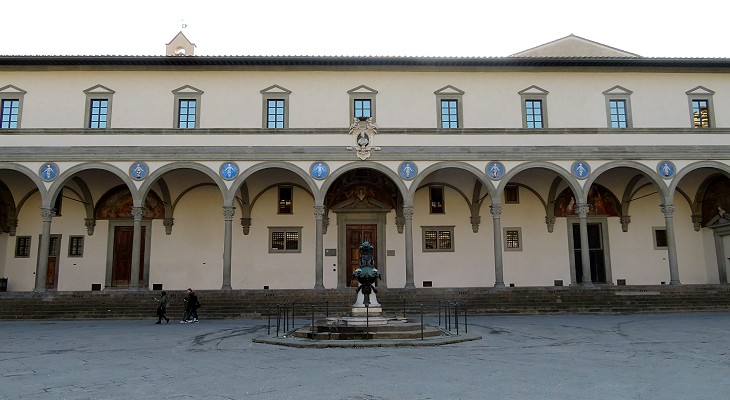 The Silk Guild, which included also goldsmiths and other metalworkers who produced luxury goods, asked one of its members, the goldsmith Filippo Brunelleschi to prepare a design for the new hospital.
Brunelleschi was praised as a sculptor, but he had no background as an architect. He had however extensively studied for two years the ancient buildings of Rome with his friend Donatello.
The long portico he designed for the hospital was a striking novelty for Florence, its first building inspired after classical antiquity. 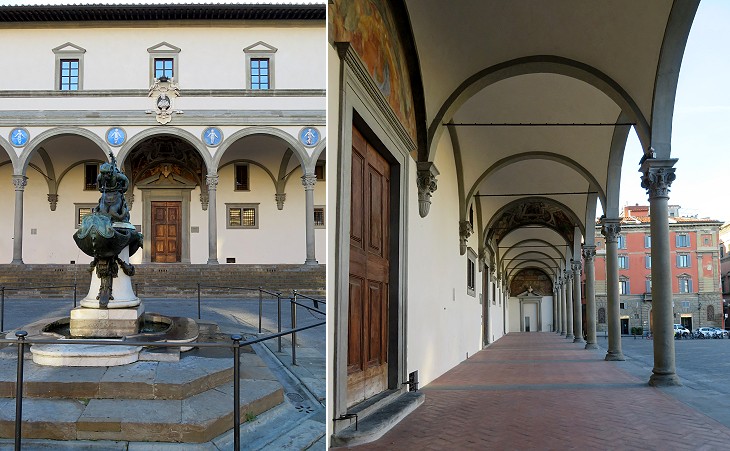 Brunelleschi is regarded as the founder of Italian Renaissance architecture: his studies of the buildings of Ancient Rome influenced his works, which however were not imitative of them: the proportions between the various architectural elements were entirely new: each bay of the portico has the same length, width and height. The way he linked columns to arches became a pattern followed by many other Renaissance architects and the highlighting of the building design by using a grey stone (pietra serena) on a white surface became a typical feature of Florentine architecture.

Spedale degli Innocenti flourished through the centuries and when the Silk Guild was no longer able to financially support it, the City of Florence took responsibility for it. The children housed in Spedale degli Innocenti were not only orphans and foundlings, but also children of families in temporary difficult conditions. The building maintained its original use until the end of the XIXth century, when, in consideration of its historical and artistic value, it was felt more appropriate to use it as a museum. It still houses two small kindergartens.
Innocenti, Nocentini, Degl'Innocenti are typical surnames which have their origin in this building (in other parts of Italy also Esposti, Esposito, Degli Esposti).

Many artists contributed their works to the embellishment of Spedale degli Innocenti: Andrea della Robbia placed his elegant ceramic glazes in the cavities designed by Brunelleschi in the arches of the portico; the children followed processions behind Madonna dei Trovatelli (foundlings), an inspired banner painted by Domenico di Michelino; even the window where babies could be left anonymously was nicely decorated. 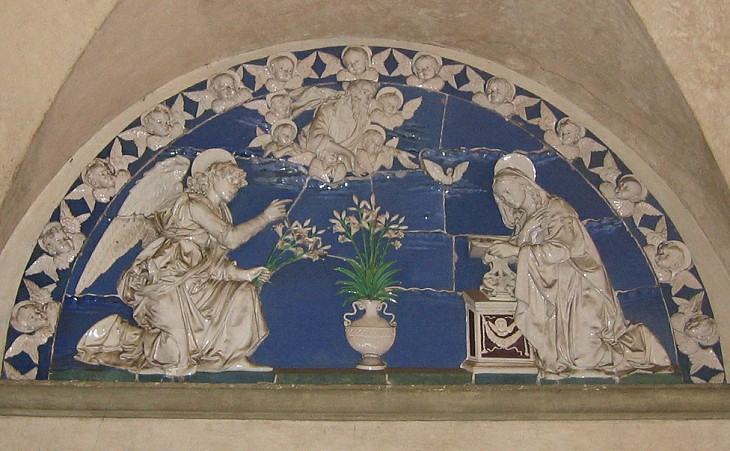 SS. Annunziata is an old church rebuilt between 1450 and 1481 and modified several times in the following centuries. In order to visually relate it to the already existing Spedale degli Innocenti it was preceded by a cloister and by a portico. The central bay of the portico was designed by Antonio da Sangallo the Elder in 1518, while the rest of it was completed towards the end of the XVIth century. By an artful "stretching" of Brunelleschi's design the height of the portico was made consistent with that of Spedale degli Innocenti.

In 1434, soon after the completion of Spedale degli Innocenti, the Medici became the most prominent family of Florence; for approximately a century they exerted their power in the frame of the Republican institutions, until they were named Grand Dukes in 1569 by Pope Pius V. The coat of arms of the family showing six pills is thought to be a reference to the Italian meaning of their surname (medici = doctors). 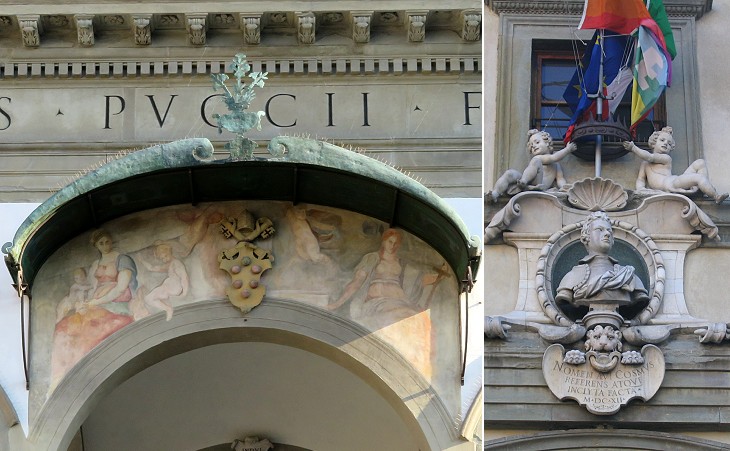 The Medici ruled Florence and Tuscany until 1737 when the last Grand Duke died without leaving a heir. Their long rule is positively assessed by historians; they managed to retain some independency between Spain and France and they promoted that agricultural development of the country which has made the Tuscan landscape so unique. They protected Spedale degli Innocenti: Grand Duke Cosimo II is remembered by a bust placed in an elegant niche: he was very fond of children: notwithstanding his poor health when he passed away at the age of 31 he had already eight offspring.

Antonio da Sangallo turned the square named after the church into one of the finest examples of Italian piazza by building for a monastery a portico identical to that designed by Brunelleschi a century earlier.

The pattern set by Sangallo influenced Michelangelo when a few years later he designed Piazza del Campidoglio in Rome. He too designed two identical buildings with a long portico at the sides of Palazzo Senatorio. It was a reverse influence that led to the erection of a bronze monument at the centre of this piazza: in Rome Michelangelo relocated in 1538 the equestrian statue of Emperor Marcus Aurelius to the centre of Piazza del Campidoglio. In 1608 Giambologna assisted by Pietro Tacca thought to do something similar in Florence. He made an equestrian statue of Grand Duke Ferdinand I and he placed it at the centre of Piazza SS. Annunziata.
Grand Duke Ferdinand I lived many years in Rome where he bought and enlarged Villa Medici: he was then a cardinal, but in 1587, at the death of his brother Francis (most likely poisoned by Ferdinand), he became Grand Duke of Tuscany.
The monument was cast with the bronze taken from the cannons captured during an expedition to the ports of today's Tunisia and Algeria, from which Ottoman corsairs launched their raids on the Italian coasts.
This explains the inscription on the horse's girth: De' metalli rapiti al fero Trace - from the metals taken from the savage Thracian (a traditional enemy of the Ancient Romans). In 1640 the rear side of the pedestal was decorated with a bronze relief showing 60 bees swarming around their queen: it was meant to symbolize Ferdinand's motto Maiestate Tantum (Great Majesty), but maybe the idea came from the bees of Pope Urban VIII, who was the ruling pope at that time. The image used as background for this page shows the relief. 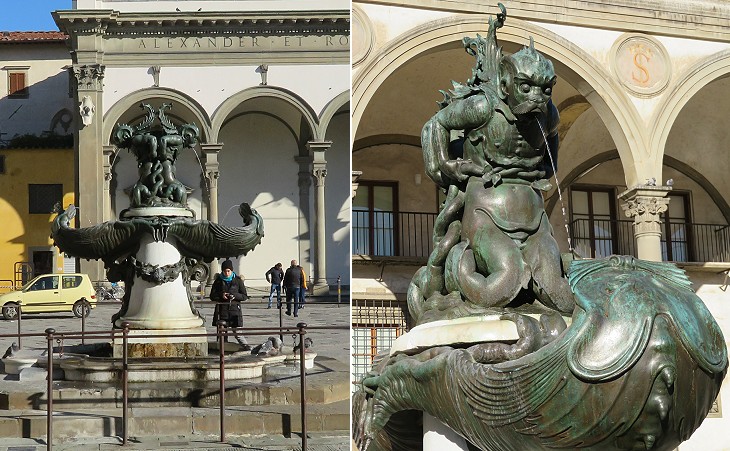 An Italian piazza is not complete without a fountain; maybe this was the rationale behind the decision of Grand Duke Ferdinand II to place in Piazza SS. Annunziata two amazing fountains by Pietro Tacca which had been designed to embellish Leghorn, the port of the Grand Duchy. This explains why, although being impressive for their craftsmanship, the two fountains do not entirely fit into the harmonic Renaissance design of the square. 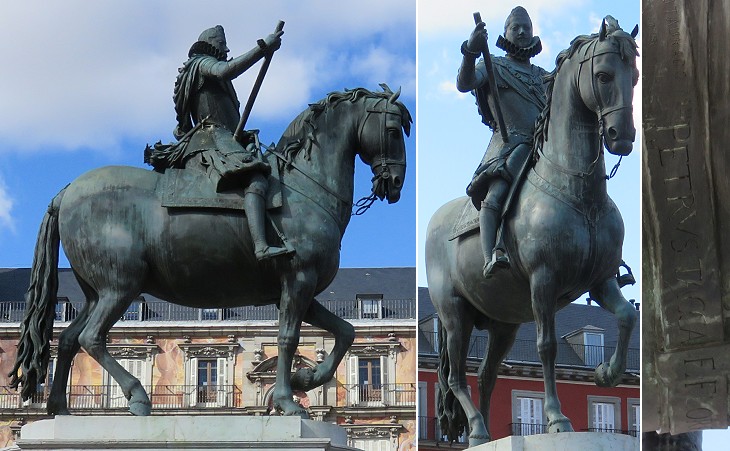 The Grand Dukes of Tuscany followed a careful foreign policy aimed at keeping good relations with both France and Spain. Grand Duke Cosimo II who succeeded his father Ferdinand I in 1609 decided to make a gift to King Philip III of Spain, his brother-in-law, and he commissioned Pietro Tacca with a bronze equestrian statue which is very similar to that in Piazza SS. Annunziata. The sculptor managed to sign his work on the horse's girth "PETRVS TACCA F. FLORENTIAE 1614". 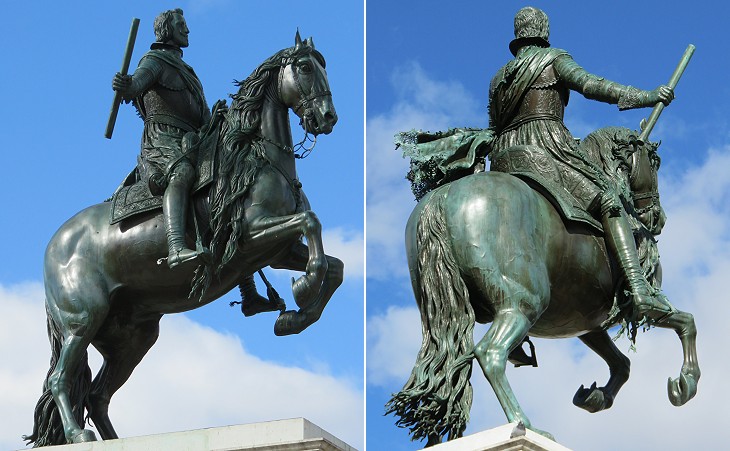 In 1634 King Philip IV commissioned Pietro Tacca with yet another bronze equestrian statue, but he did not want to be portrayed in the same manner as his father. Diego Velazquez provided Tacca with a portrait of the king riding his horse while the animal is prancing on its hind legs. Tacca sought the advice of Galileo Galilei in order to calculate the weight of the (solid) rear section of the statue which was needed to support the (hollow) front one. It was the first equestrian statue to depart from the pattern established by the statue of Marcus Aurelius. 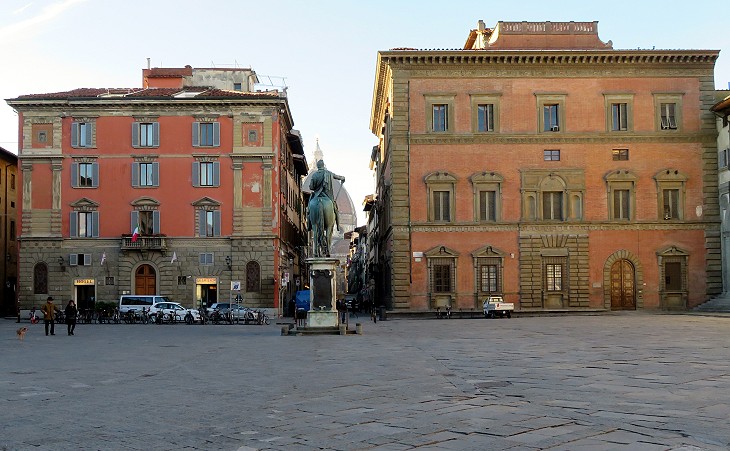 Via dei Servi leading to the Cathedral and the two palaces which close the southern side of the square; that to the right (Palazzo Budini Gattai) was designed by Bartolomeo Ammannati