Similar to the valley of Goreme, the Ihlara Valley (in the past known as Peristrema) combines natural beauties with historical works of art. 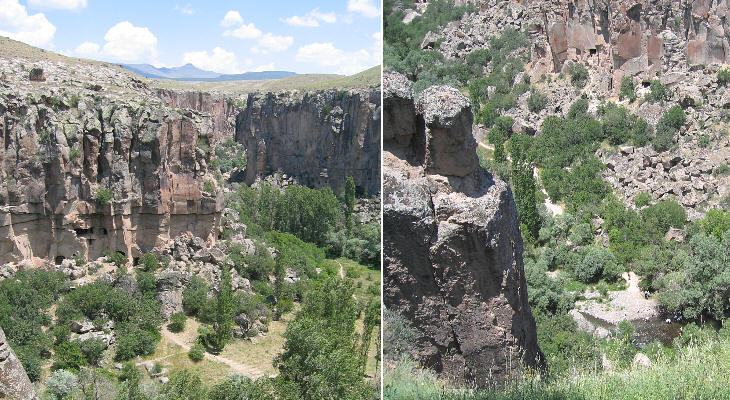 The valley (view from its southern ridge)

(May 1837) On our descent, the rocky cliffs to our left were burrowed by numerous caves and grottoes, and in the valley below we arrived at a small village of Greek Christians, which was surrounded by culture. Mountains, which extended from the Hasan Tagh to the eastward, constituted a long and impenetrable barrier to the south, and everywhere limited this rocky region in that direction; this village is thus exceedingly confined and hemmed in on all sides by volcanic rocks, as were also all the adjacent valleys, giving to each a wild and isolated character.
William F. Ainsworth - Travels and Researches in Asia Minor, Mesopotamia, Chaldea, and Armenia - 1842
The valley is the result of the collapse of rocks originally erupted by Mount Hasan, which is located to the west of Nigde. A small stream, now called Melendiz, found its way through the rocks and in millions of years it enlarged its bed. The resulting canyon has a length of eigth miles. 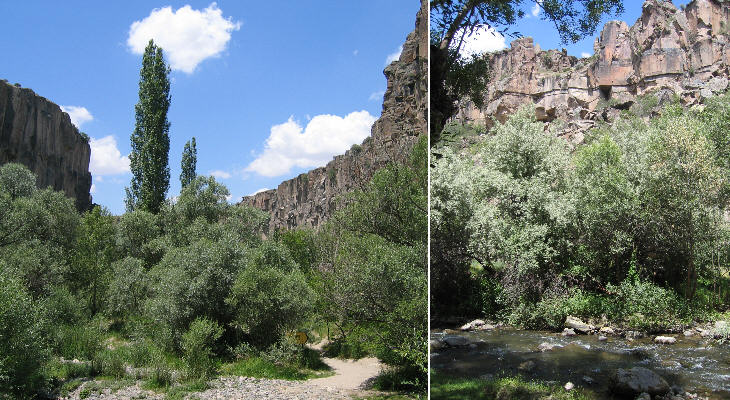 Down in the gorge

Our guide did not know his way through this district of alternate rocks and vales, and we were not long in losing our track; nor did we regain it, till, after wandering several hours amidst wood, glens, and marshes, we came upon some hilly heights, from whence we obtained a view of the great plain. (..) The middle of the vale was watered by a rivulet, the banks of which soon became verdant with trees, shrubs, and gardens. Ainsworth
The walk is shadowed by poplars and other trees and it is accompanied by the babble of the brook. It calls to mind the Samaria Gorge on Crete. 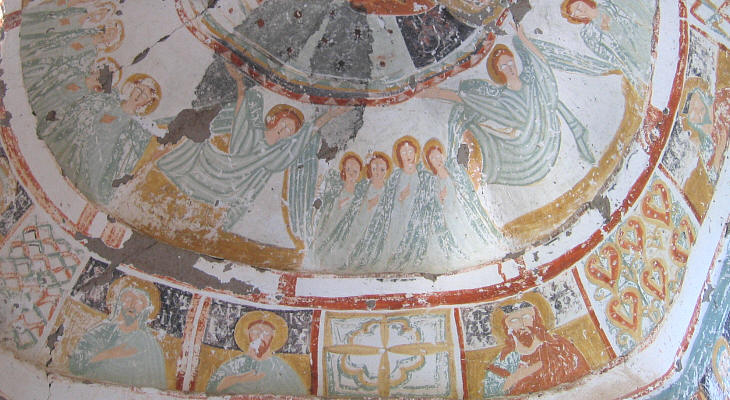 Agacalti Kilisesi (church under the tree): frescoes on the dome portraying prophets and apostles; a detail is shown in the image used as background for this page

Many churches were dug into the walls of the canyon; they date over a long period of time. The frescoes shown above have a neat design and a sense of movement which are unusual in Byzantine art.

Agacalti Kilisesi: frescoes on the right side wall depicting the Magi in Persian costumes

The churches were abandoned for centuries but the damages to the frescoes have two distinct causes: modern vandalism and ancient hate for what was regarded as a sinful practice. The blinding of the eyes may not have been the action of Muslims, but rather of VIIIth century Byzantine iconoclasts. Blinding was a favourite punishment at Constantinople and many emperors who lost the throne, lost their eyesight too.

As the valley widened, and the cliffs rose higher, the caves became more numerous, often ascending in tiers, one set above the other, some open, others partly closed, and sometimes continuous for a distance, with little apertures for light dotting the line of their extent, and at an elevation, and on the front of precipices which the most daring troglodyte would scarcely be expected to scale. Ruins began also now to show themselves at the foot of the acclivities, and in the valley pathway. Ainsworth
At the end of the gorge the erosion of the volcanic rocks (a mix of basalt and tuff) has created the same landscape which is usually associated with Goreme. Whether the Greeks of this part of Cappadocia willingly repaired to the ravines and fastnesses, with their subterranean dwellings, that belong to this singular country, by predilection for the morose seclusion and religious retirement which sprang from a young and devout, but ill-understood Christianity; whether they simply remained around the ancient abodes of their fathers, and thus escaped the dispersion and extermination that fell to the lot of the town dwellers; or whether, as is most likely, they sought refuge in those caverned fastnesses from the successive invasions of Persians, Syro-Circassians, Turkomans, and last of all Osmanlis, the present race can tell you nothing: yet certain it is, that these caverned dwellings, and chapels, and tombs, are a characteristic of the Christian Cappadocian Greeks. Ainsworth
Houses, stables and warehouses were cut into the soft tuff. The only traditional old building along the whole valley is a Seljuk kumbet (mausoleum with a pyramidal roof). 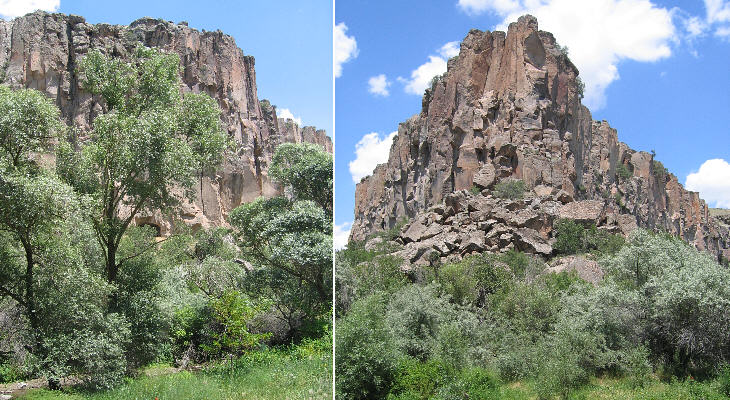 Views of the canyon

Other locations in Cappadocia:
Goreme
Uçhisar
Cavusin, Avanos and Urgup