Tuesday, July 18. (1836) We started this morning at half-past seven, eager to see the remarkable valley of Urgub, of which M. Texier has published such an interesting account. We were, however, told to expect objects still more remarkable at a place called Utch Hissar, half-way to Urgub.
William Hamilton - Researches in Asia Minor, Pontus and Armenia - 1842

Uçhisar and one of the paths leading to Goreme

Uçhisar means "third castle", but because in Turkish uçus means flight and uçmak means to fly, one could think that "flying castle" would be a more appropriate name for this rock which stands above Goreme and can be seen from a very long distance. While the erosion process which occurs at the edge of the tableland is easily understandable, that which led to the formation of Uçhisar is not. It is difficult to understand why volcanic eruptions accumulated so much ash at this location. 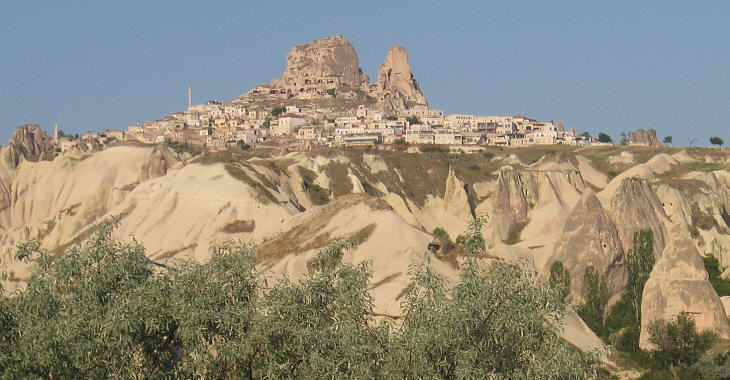 After emerging at the head of the valley, we still ascended over the plain, sloping gently to the west, with the remarkable rock of Utch Hissar in front, honeycombed by the caves cut in its sides, until we reached the burial-ground at its base. Hamilton
Uçhisar is located in a dominant position on the southern edge of the valley leading to Goreme. The inhabitants were relocated some decades ago from their rock-cut homes to new houses. Authorities have not allowed the construction of exceedingly large buildings. 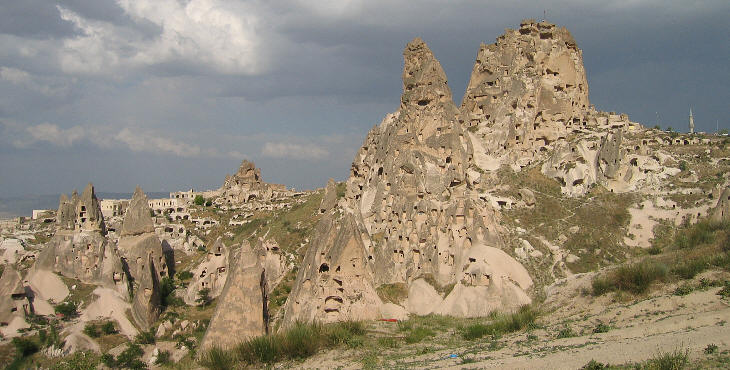 Uçhisar (afternoon view); also in the image used as background for this page

As we descended through the village and wound round the base of the lofty rock above mentioned on our left, its sides were literally covered with caves, some of which, from the front wall having fallen away, presented vast apartments supported by columns; on our right was an insulated pinnacle, rising up in the centre of the village, to a height of more than 200 feet, excavated on all sides, and offering many windows and openings even near the very summit, an approach to which appears impossible, except by an internal staircase cut in the rock itself. Hamilton
The way the rock has been carved out is simply unbelievable; inside the main peak there is a covered road leading to its top: it was the village high street. 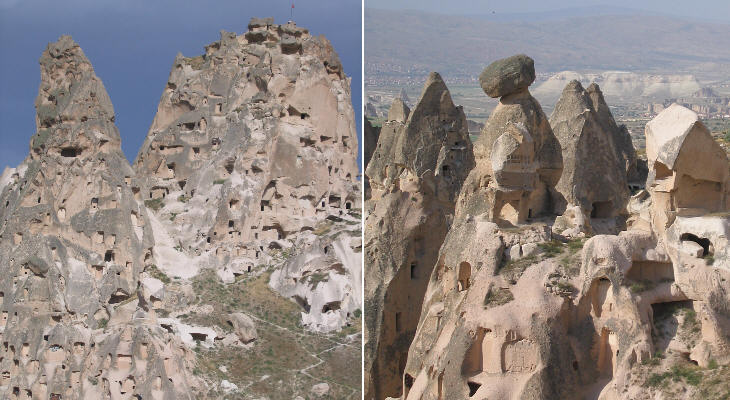 Uçhisar: (left) the two peaks; (right) a "fairy chimney" seen from the top of the main peak

Occasionally the block of basalt which limits the erosion of the underlying tuff holds its position even though physics laws would expect it to fall. These pinnacles with a sort of Basque cap are called fairy chimneys.

View of one of the paths (valleys) leading to Goreme

Another valley was planted with vines and fruit-trees, chiefly apricots. Notwithstanding the porous nature of the tufaceous soil, gourds, French beans, etc., grew well without water. Hamilton
Uçhisar is an excellent starting point for going down to Goreme along one of many paths (locally called valleys; as you may expect there is a Love Valley). 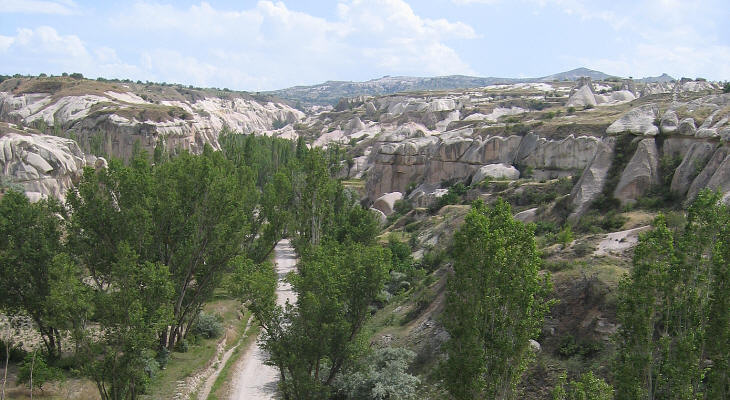 High poplars and tiny carefully farmed fields flank the paths. The shape of the rocks follows a similar pattern scheme but with many variations. 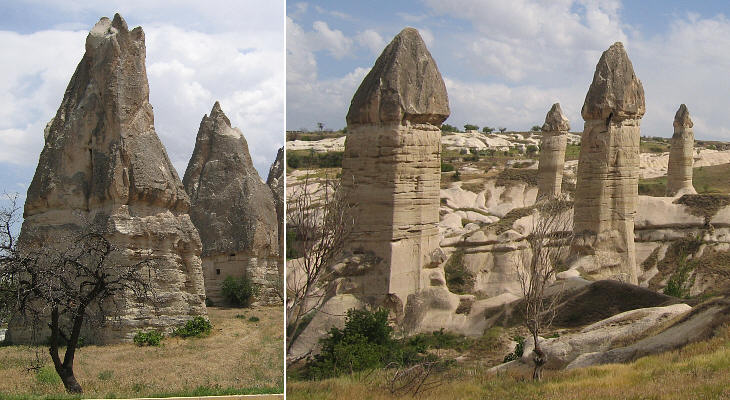 Cones, pyramids, towers, obelisks and ... you name it (you may wish to see those of Kandovan in Iranian Azerbaijan)