August 1836. From this spot the town of Nigdeh and its castle on a low insulated hill appeared about three miles off; low hills skirted the roadside on our right, consisting of alternating beds of sand and conglomerate. Soon after eleven we reached the extensive gardens of Nigdeh.
William Hamilton - Researches in Asia Minor, Pontus and Armenia - 1842

I visited the castle built on a low rising ground between the town and the valley: its construction appeared to be entirely Turkish. Hamilton
Nigde was founded (by the Hittites) on an isolated hill which could be easily fortified. In the XIth century the Seljuks strengthened its defence with new walls and towers. The town was important to them because it was located on both a road from Konya to Kayseri and another one which linked the Mediterranean Sea with the tableland through a pass known as the Cilician Gates.
Short stretches of wall and the ruins of a couple of towers (which have been turned into houses) are the only remains of the Seljuk enclosure. The Ottomans built a polygonal fortress to which a minaret-like clock tower was added towards the end of the XIXth century. 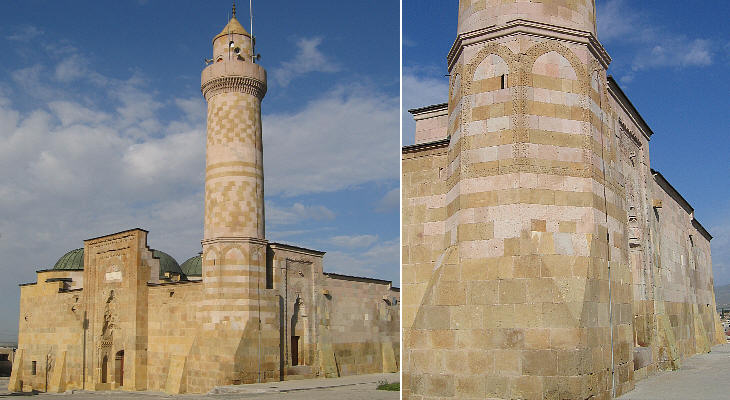 The reign of Sultan Alaeddin Kaykubad I (1220-1237) marked the apogee of the Seljuk Empire of Rum. He gave his name (as he had done in Konya) to a large mosque built inside the citadel of Nigde. Its stout minaret resembles a lighthouse: its structure is very typical: the shaft rests on a square base which becomes octagonal in its upper part. The use of yellow stones of a different tone lightens the whole structure. 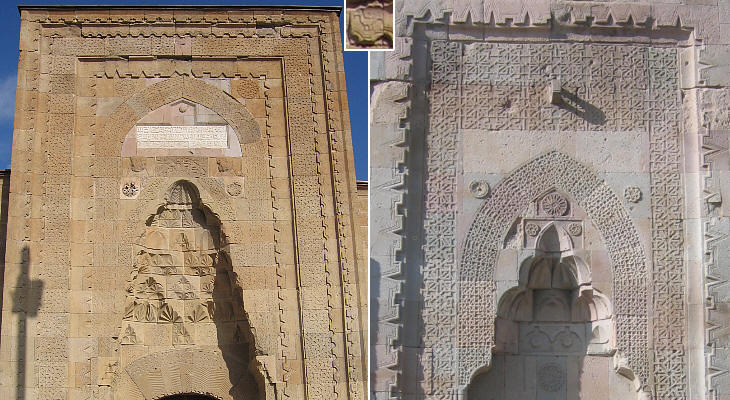 Two very large portals characterize Alaeddin Camii: they exceed the height of the building (in particular the southern one). Their decoration is very elaborate yet at the same time it is neat, in the sense that it does not distract the viewer from the appreciation of the overall design. In the maze of geometric patterns stonecutters hid some living creatures.

One hundred years separate the construction in 1335 of this complex of buildings which includes a turbe (mausoleum) from that of Alaeddin Camii. During this period the Sultanate of Rum split into minor states which all were vassals of the Ilkhanate (one of the four khanates into which the Mongol Empire split in 1250 ca). Sungur Bey was the governor of Nigde and for the construction of this complex he relied on master builders who were familiar with Gothic architecture. This was introduced in parts of Syria, Palestine and Cyprus after these countries were conquered by the Crusaders, chiefly in the construction of their castles, e.g. at Safita. 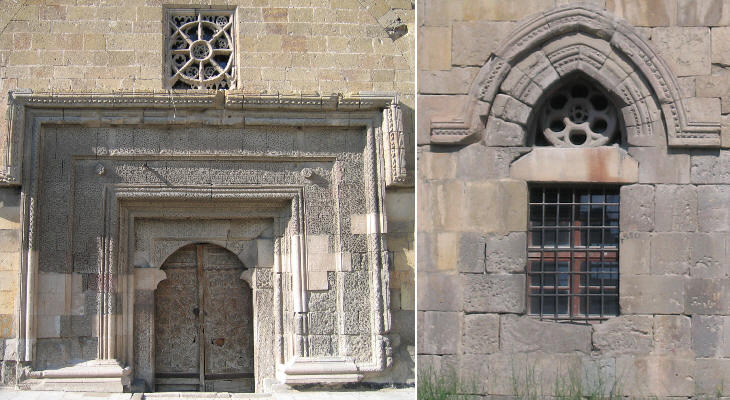 The eastern portal provides a striking example of the interpenetration between Gothic and Islamic arts. The shape of the portal and the rose window belong to the former, while the decoration is typical of the latter. Also some windows have clear Gothic features. Both the portal and the windows are framed by a plait motif, which can be seen in the Town of Rhodes and at Lindos, where it was introduced by the Knights of St. John. 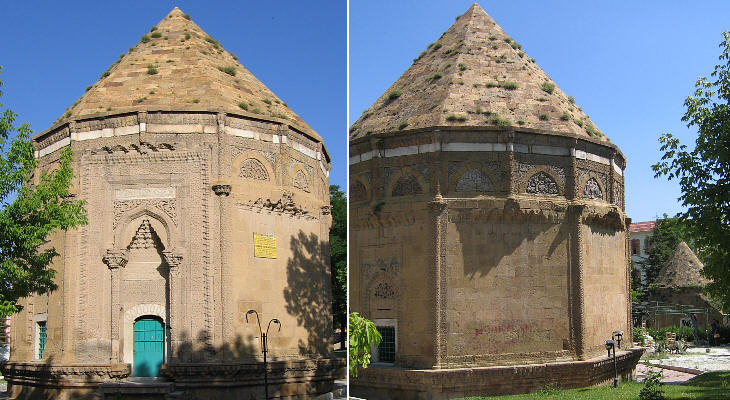 In the burial-grounds which we passed through, I only perceived a broken shaft of a handsome fluted column, and a few shrines or monuments of elegant Saracenic structure. Hamilton
Hudavent Hatun was the daughter of Kilic Arslan IV, one of the last Seljuk sultans. She was buried in a beautiful mausoleum built in 1312. It has an octagonal shape, but its upper part is decorated by a band having sixteen sides. 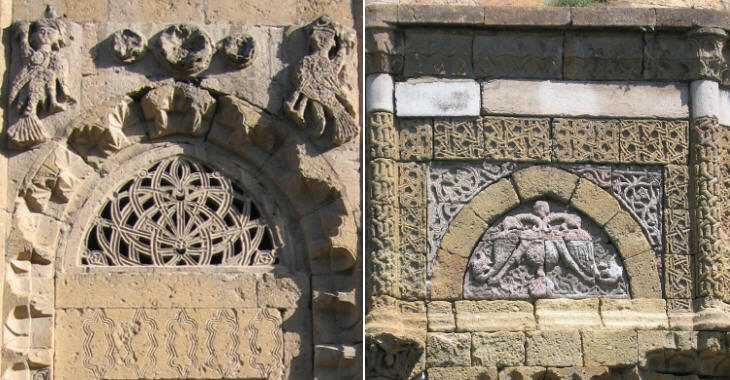 Hudavent Hatun Turbesi: (left) decoration above the window to the left of the entrance; (right) one of the panels of the upper decoration

An ancient tomb at Xanthos is called the Harpy Tomb because it is decorated with a relief portraying harpies, winged spirits who accompanied the souls of the dead to the underworld. These Greek mythological monsters surface again in this Seljuk mausoleum.
An elaborate double-headed eagle is portrayed in one of the panels. It was the symbol of the Seljuk Sultans (it was borrowed from the Byzantine Empire).

The decoration is colourful due to the use of different stones and of a stripe of marble; both geometrical and floral motifs are very elaborate. You may wish to see the floral motifs which decorate the darussifah (hospital) of Divrigi. 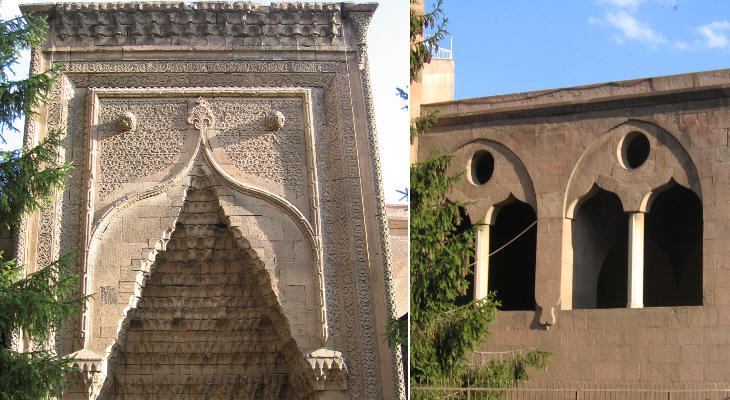 Ak Medrese: (left) main portal (a detail of which is shown in the image used as background for this page); (right) detail of the windows

The Mongol control over Anatolia weakened after 1335. The rulers of Karaman took advantage of the ensuing power vacuum and added Nigde to their possessions. They built in 1409 a medrese with a very elaborate pishtaq, a portal projecting from the facade of a building. It features an ogee line (i.e. an S-shaped double curve) which is typical of English Gothic architecture (e.g. in the Great Cloister of Canterbury Christ Church Cathedral) and which also appears in the design of the windows.

In 1468 the Ottoman Sultan Mehmed II defeated the Karamanids and expanded his empire on most of the Anatolian tableland. During Ottoman rule several domed mosques were built in Nigde, but the town lost importance.

(left) Ottoman bedesten; (right) a church near the bedesten

The town is said to contain 300 Greek houses, 40 Armenian, and 900 or 1000 Turkish. (..) In the afternoon I strolled through the bazaars and Bezesten, which are extensive. Hamilton
The Ottomans built in the XVIth century a long bedesten (covered market where valuable goods were sold). In the Ottoman Empire Greeks and Armenians had a relevant role in trade and so it is not surprising to find some abandoned churches in the whereabouts of the bedesten.

(left/centre) Roman inscription and Byzantine crosses at the local Archaeological Museum; (right) another church near the bedesten