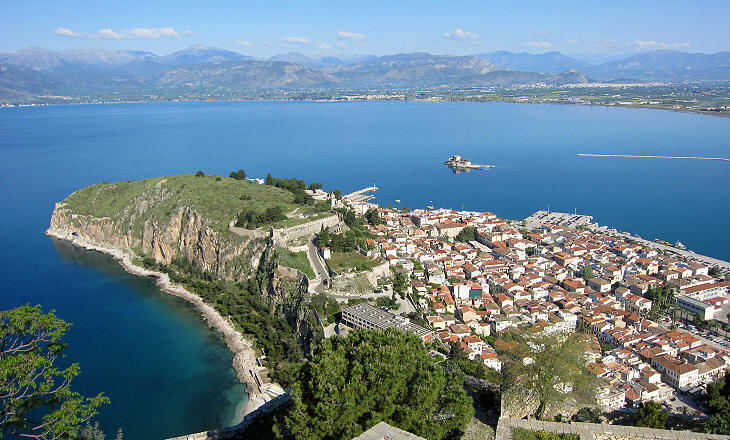 The fortresses of Acronauplia (Upper Nauplia aka Indje Kalesi) and Bourtzi aka St. Nicholas (on an islet) seen from Palamidi; in the distance on the right side of the image the town and the fortress of Argos

Nauplia, the port of Argos, was situated at the bottom of a deep gulf. (..) In the second century the town was desolate; but ruins of the walls remained, with a temple of Neptune, and a fountain. (..) The harbour is the most secure and best defended in the Morea. The houses are on a tongue of land running out into the sea, and overlooked by a high and abrupt mountain. It is a place of a good appearance, and is strongly fortified both by nature and art. It was taken, with the castle of Argos, by the Venetians in 1686.
Richard Chandler - An account of a tour made at the expense of the Society of dilettanti - 1775
According to tradition Nauplia was founded by Nauplius, a son of Poseidon, the Greek god of the sea, on a short promontory at the eastern end of the Argolic Gulf (aka Gulf of Nauplia). Argolis is the region of northern Peloponnese where the Mycenean civilization developed between 1600 and 1100 BC. Palamidi, a large rocky hill to the east of Nauplia, is named after Palamedes, a son of another Nauplius, king of Nauplia, who participated in the Trojan War. 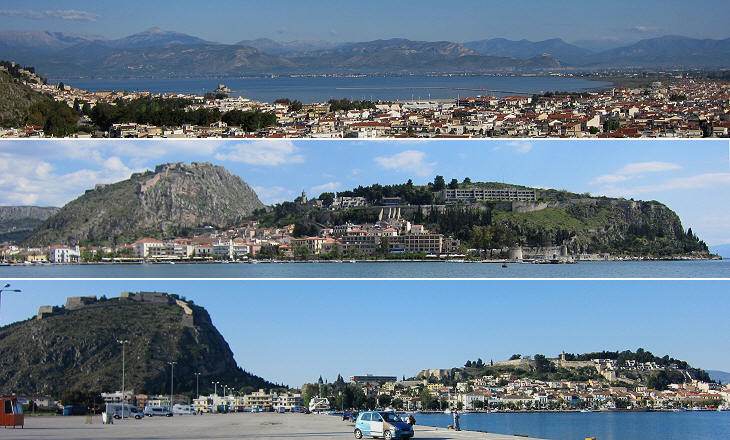 (March 1806) The modern town stands upon the north-eastern side of a height, with a tabular summit, which projects from a steep ridge at the south-eastern angle of the bay of Argos. This height, naturally a peninsula, was made an island by the Venetians when they excavated a wet ditch for the fortifications which they constructed for the defence of the land-front. There are still some remains of the Hellenic fortifications of Nauplia to be seen on the brow of the table-summit, which forms the south-western portion of the peninsula.
William Martin Leake - Travels in the Morea - 1830 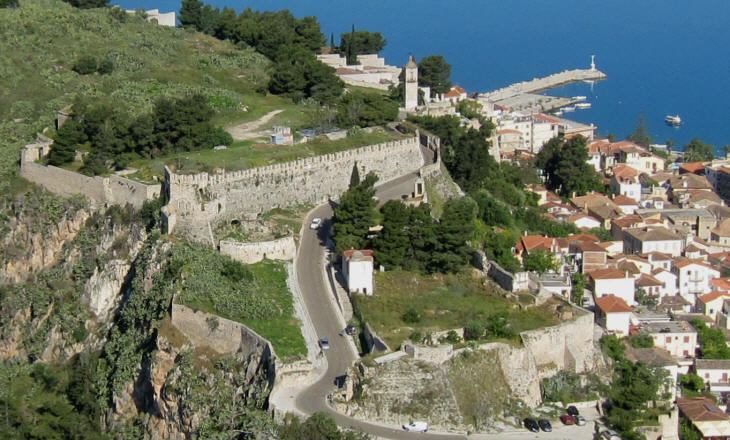 Fortifications of Acronauplia seen from Palamidi

Nauplia seems never to have attained, in ancient times, an importance equal to that which it acquired during the Byzantine empire, and which was even augmented when it became the chief town of the Morea under the Venetians and the Turks. (..) The body of the ramparts, both of Palamidhi and of Indje Kalesi, as the Turks call the lower fortress, are built of stone. Leake
After the 1204 conquest of Constantinople by the Frank knights leading the Fourth Crusade, Argos and Nauplia were assigned to Othon de la Roche; the fiefdom was eventually acquired by the Enghien family until it was sold to Venice in 1388. At that time the town was located on the promontory and it was protected by walls built by the Byzantines (Castel de' Greci in Venetian accounts) and enlarged by the de la Roche/Enghien (Castel de' Franchi). 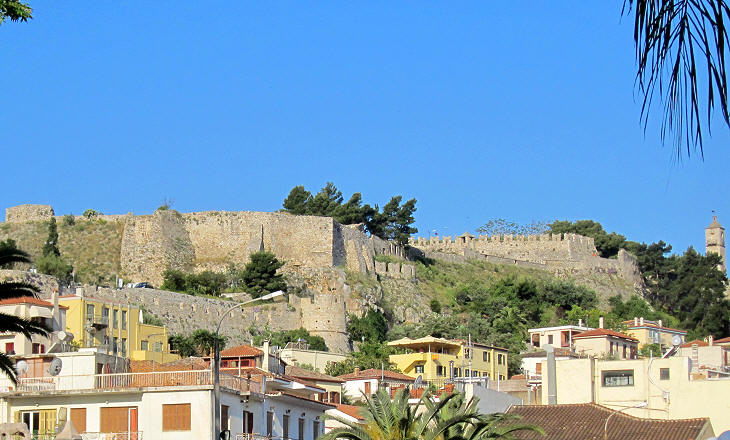 Acronauplia seen from the modern town

The decision to buy Nauplia had the objective of protecting the activity of Venetian merchants; their presence at Nauplia was established as early as the end of the XIth century as a consequence of an edict by Emperor Alexius I Comnenos issued in 1082 by which Venice was granted access to all Byzantine ports; this in return for the Republic's help in protecting the Empire from the attacks of Robert Guiscard, the founder of a Norman kingdom in Southern Italy. 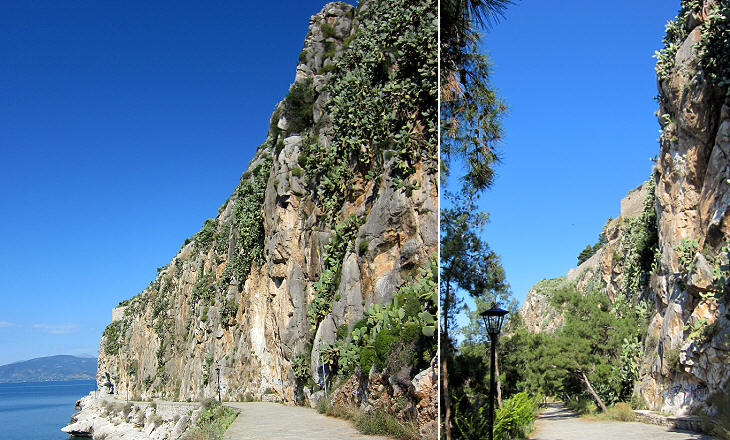 The table-height surrounded with cliffs, forming the summit of the peninsula, and around which are the remains of the Hellenic fortress, is unoccupied with houses, and is fortified towards the sea only with a low wall, the steepness of the cliffs furnishing a protection on that side of the peninsula. These cliffs are covered with cactus, from whence, perhaps, has been derived the name of Indje Kalesi, in allusion to the rig-like fruit of that plant. Leake
At the time of the Venetian acquisition of Nauplia the Byzantines were gradually taking control of the whole of the Peloponnese to the detriment of the remaining Frank fiefdoms. They established a Despotate of Morea (Peloponnese) which was only formally a part of the Byzantine Empire and which at least initially was able to cope with the growing Ottoman threat. 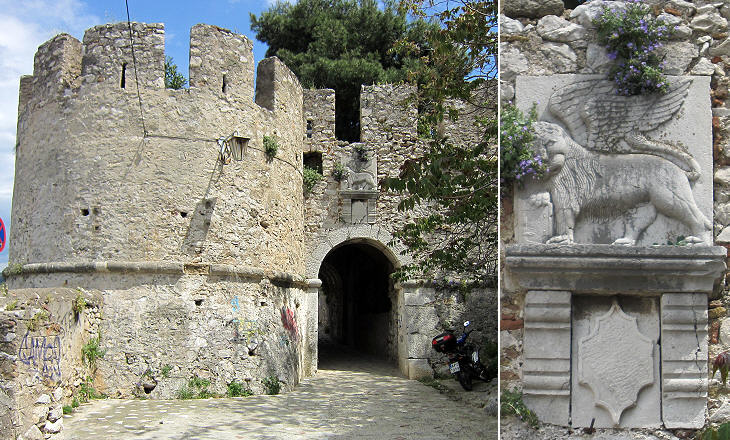 Gate which was the main access to the old town

For some time after having acquired Nauplia, the Venetians did not bother about fortifying it, but after Sultan Mehmet II conquered Constantinople in 1453, they realized that the Ottomans were a real threat to their possessions; more so after the Ottomans conquered Mistra (1460), the capital of the Despotate of Morea and Negroponte (1469), an island held by the Venetians since 1204. 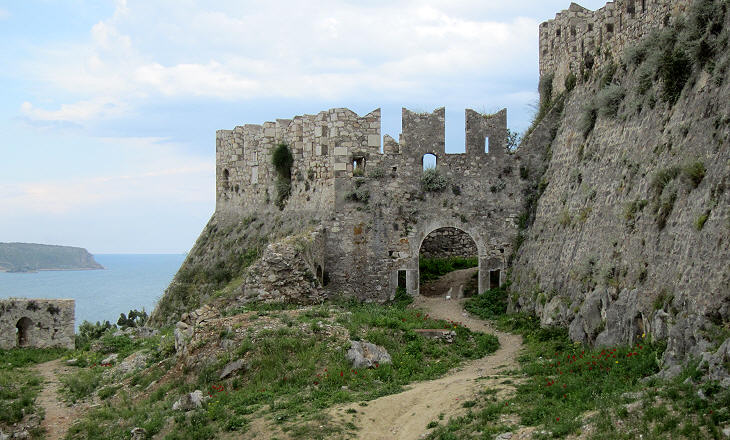 Gate of one of the partitions of Acronauplia

New fortifications which included a circular bastion (Castel del Toro o Torrione) were built to the east of the existing ones; all walls of the previous fortifications were maintained so that the town was partitioned into three separately defensible sections.
In 1499 the Ottomans waged war on Venice; they conquered Lepanto, Navarino, Corone and other fortresses, but not Nauplia and when eventually a peace agreement was signed in 1502, the Venetians were able to retain the town.

The new fortifications proved again their effectiveness in 1537 when the Ottomans vainly attempted to seize Nauplia and Malvasia which were the only parts of Peloponnese not in their hands; in 1538 however a Christian fleet was routed near Preveza and the Venetian Senate decided to reach a peace agreement with Sultan Suleyman I. In 1540 Alvise Badoer, a special envoy, was sent to Constantinople to negotiate a truce and eventually a lasting peace; he was given latitude to surrender Nauplia and Malvasia "as a last resort". 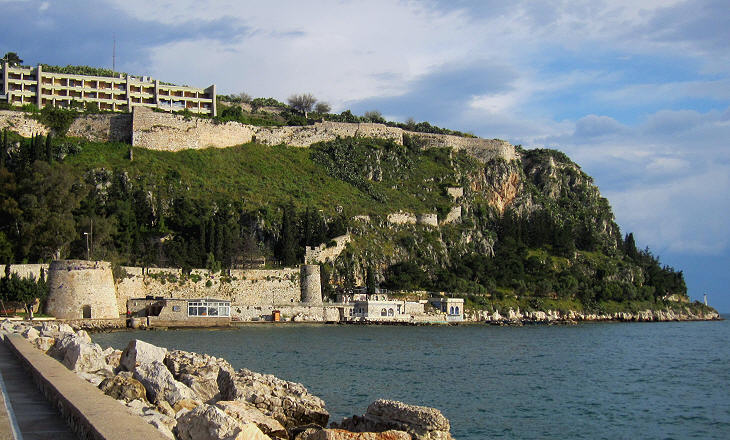 Badoer soon realized that the Ottomans were determined to obtain the two fortresses; he embarked upon lengthy negotiations in the hope of modifying the Ottoman position, but eventually he gave up and the Sultan obtained what his troops had been unable to conquer in the battlefield. Later on it was discovered that the Ottoman obstinacy in wanting the two fortresses was due to the fact that they knew about Badoer's mandate; the information was passed to them by the French ambassador to Venice who learnt it from his sources inside the Council of Ten, the major governing body of the Republic. 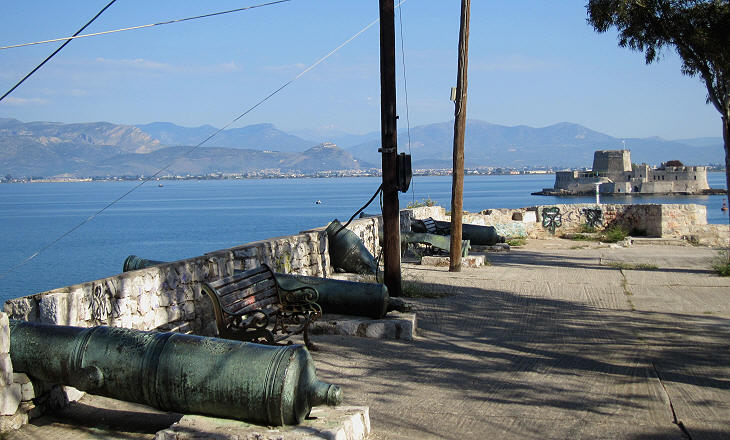 Cannon Terrace at the foot of Acronauplia

During the Ottoman rule the importance of Nauplia as a commercial port declined while it remained a safe haven for the Ottoman fleet; in 1686 the Venetians, led by Francesco Morosini, the former commander of Candia, after having seized the southern part of Peloponnese, attacked Nauplia; the fortifications provided the defenders with a great advantage, but after an Ottoman counterattack was easily repelled by the Venetian musketry, they surrendered. 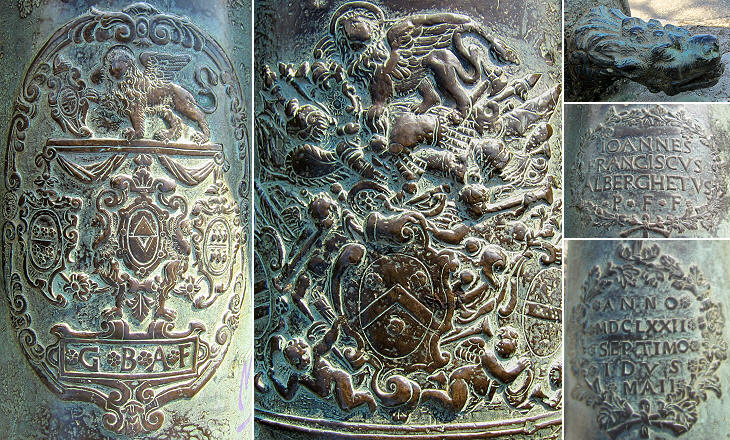 Details of the guns

The Venetians brought with them guns with a very elaborate decoration which shows the skill of their foundries; all this attention to winged lions, coats of arms, laurel wreaths and flying angels was indicative of a tendency to turn away from the fact that the might of Venice was declining.
Some of the guns on display at Nauplia were cast in the foundry of the Alberghetto; they were a veritable dynasty of bronze-workers and they are mentioned in Venetian records as early as 1498; the Alberghetto continued to work for the Republic until its end in 1797 because in 1792 a member of the family was appointed chief founder. GBAF most likely stands for "Giovanni Battista Alberghetto Fonditore". For another example of Italian gun turned into a work of art you may wish to see Cannone di S. Paolo (in a separate window) at Museo del Bargello in Florence. 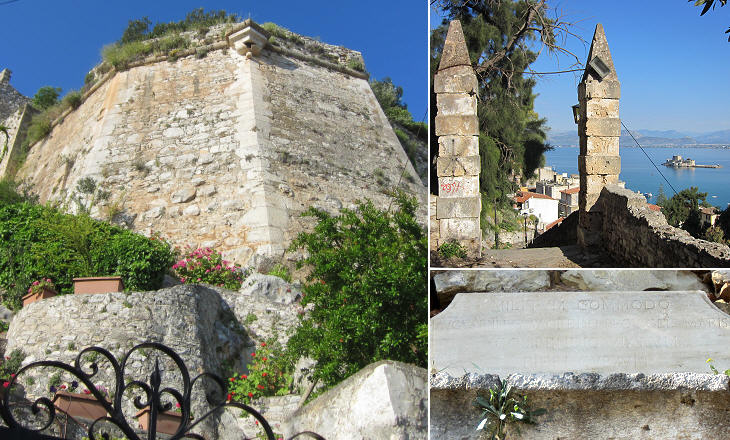 (left) Western bastion; (right) gate opened by Fleet Commander Agostino Sagredo in the early XVIIIth century and inscription saying it was opened to facilitate the access of the garrison to the town (Militium Commodo)

The Venetians decided to make Nauplia the capital of the Kingdom of Morea as they called the Peloponnese; they felt the medieval settlement of Acronauplia was unfit for this new role and they relocated its inhabitants to a newly designed town near the harbour. 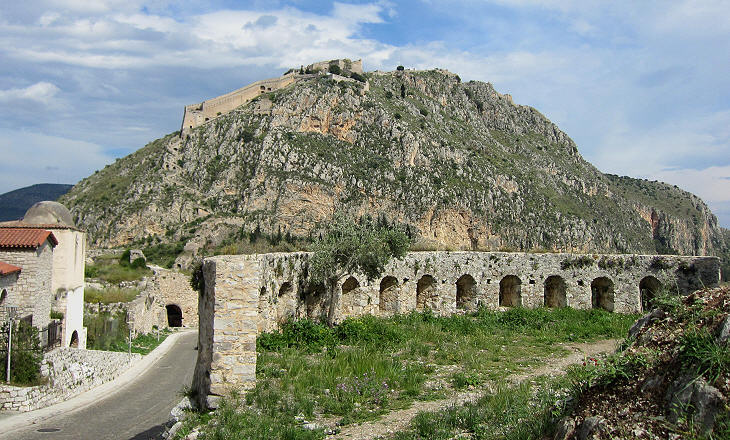 Palamidi seen from the eastern fortifications of Acronauplia

The fortifications of Acronauplia were not particularly strengthened by the Venetians after they reconquered the town because they focussed their attention on building a new state-of-the-art fortress on Palamidi. 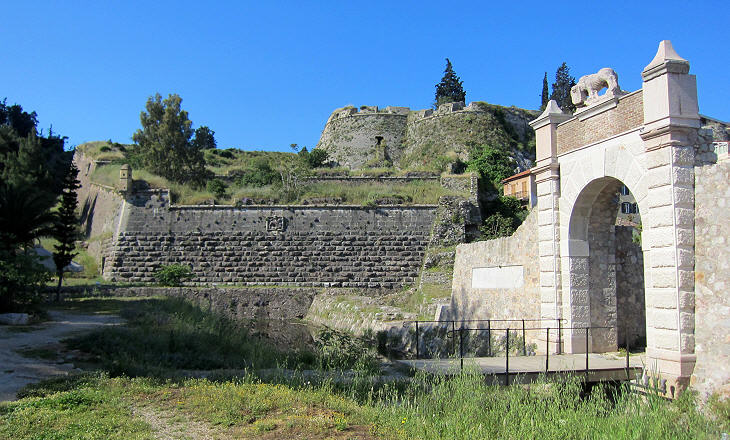 (ca 1801) In going along the principal street, one is surprised to find at the end of five or six hundred paces a gate with embrasures, and, looking up towards the mountain, to see it planted all over with batteries, in stories one above the other, which command the town, the port, and even the elbow formed by the shore on the eastern side.
François Charles Hugues Laurent Pouqueville - Travels in the Morea, Albania, and other parts of the Ottoman empire - 1817 edition
Before the construction of the fortress, the Venetians built a bastion to protect the new entrance to the town; the gate was reconstructed in recent years and the lengthy inscription celebrating Francesco Morosini (who died at Nauplia in 1694) was placed on a side wall. 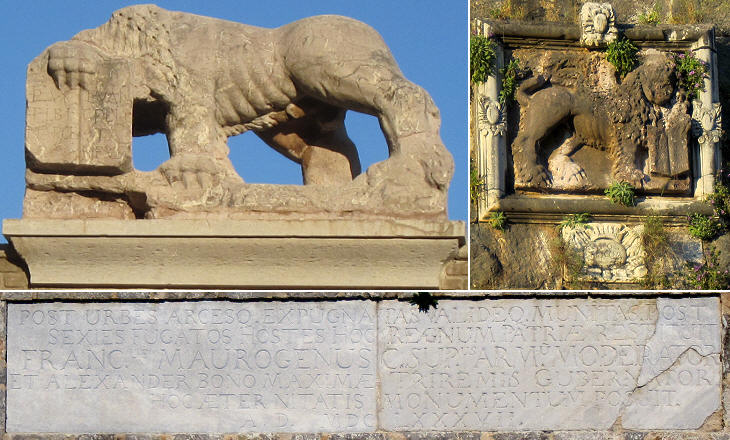 (above-left) Winged lion of the new gate; (above-right) winged lion of Grimani Bastion; (below) inscription of the new gate: in addition to Morosini, it makes reference to Alessandro Bon who at the time (1687) was commander of the "galeazze", the large Venetian ships which carried guns ("maximae triremis" in Latin) 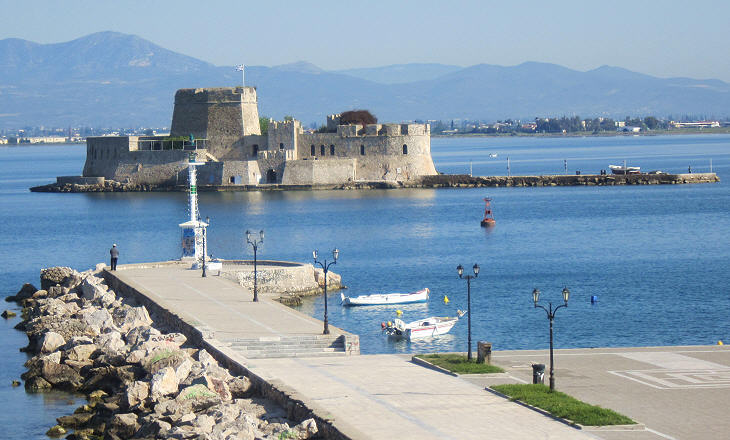 The small island of St. Nicolas, (the guardian of sailors), three or four hundred yards off the north-western point of the peninsula, is occupied by a castle; a little within this the anchorage is deepest. Leake
At the entrance of the bay of Nauplia, to the north, is a little fortress built upon an isolated rock, and the passage into the bay between the eastern side of this fort and the main land may very possibly have been shut formerly by a chain. Pouqueville
The name Bourtzi derives from burç, a Turkish word meaning tower (Uzuncaburç = tall tower) and it is used to indicate isolated fortifications; in Greece there are bourtzi at Modoni, Skiathos and other locations, but the best known bourtzi is that of Nauplia. 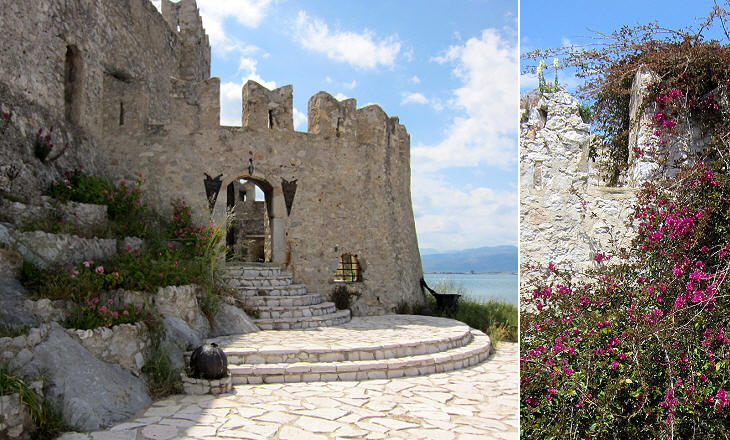 Details of the sea fortress

The rock on which stands the fortress I have mentioned is just even with the surface of the water. The fortress consists of a little tower, planted only with a few swivels and two or three very indifferent houses. This point is therefore not at all dangerous to any vessel which would attack Nauplia by sea, for a single broadside would lay the whole fortification in ruins. Pouqueville
The small fortress was designed by Antonio Gambello, an architect from Bergamo, in 1471; initially it was made up of a single tower; bastions were added later on, giving it the ship-like appearance it has today. It was further strengthened by the Ottomans who closed the entrance to the harbour by laying a chain from Bourtzi to the pier. 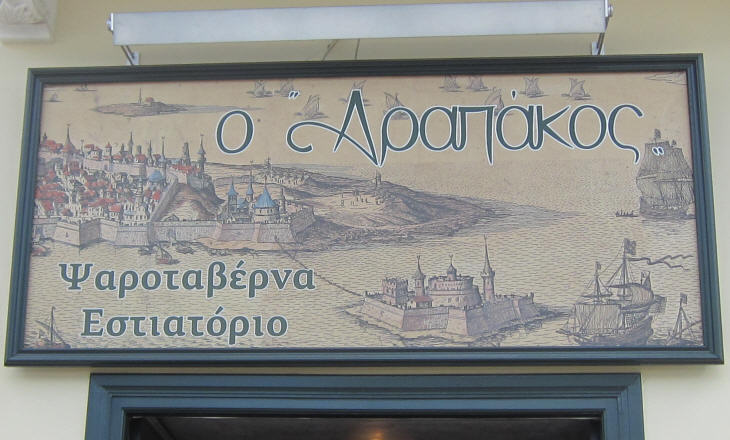 Move to page two: Palamidi and the Venetian/Ottoman/Greek town