- Vonizza (Vonitsa)
(detail of a 1651 engraving by Marco Boschini)

Vonizza, is located on the southern coast of the Gulf of Arta (or Avramkikos Gulf), some ten miles to the east of Preveza. Because of its commanding view over the Gulf of Arta and over a small natural harbour, the hill of Vonizza was fortified by the Byzantines and after them by the Ottomans and the Venetians.

View of Vonizza from the east

19th June, 1805. From hence to Vonitza the land is well cultivated with corn. Leaving on our right a monastery, beautifully situated below a grove of oaks on the side of the mountain, we descend into the plain, and crossing it diagonally, arrive at Vonitza at 12.10. (..) The district of Vonitza extends 4 or 5 miles round the town. (..) The advantages of Vonitza are its fine bay for ships, its harbour at Myrtari for small vessels, its forests abounding in excellent timber and pasture for cattle; a fertile valley, an easy communication with Lefkadha, and a fortress in a position which commands the access into Acarnania and Etolia from Epirus by the way of Prevyza.
William Martin Leake - Travels in northern Greece - 1835
Today Vonizza is a sought after location by holiday makers who enjoy sailing and in particular by those who are in the learning process, as the shallow waters of the Gulf of Arta are usually very calm (... although, according to a popular saying, calm seas never make skilful sailors).

Eastern side of the fortress

The house in which I am lodged at Vonitza, that of the Greek primate Khalikiopulo, commonly called Logotheti, from his ecclesiastical office, stands on the shore, on the side of a strait about 200 yards in width, which communicates from the Bay of Vonitza to the Limeni, a shallow harbour which widens to half a mile, and is about two miles long. Leake
The hill chosen for the construction of the fortress had a cliff on its western side, but on the eastern one it gently sloped towards the sea. For this reason this side was protected by three curtains of walls. 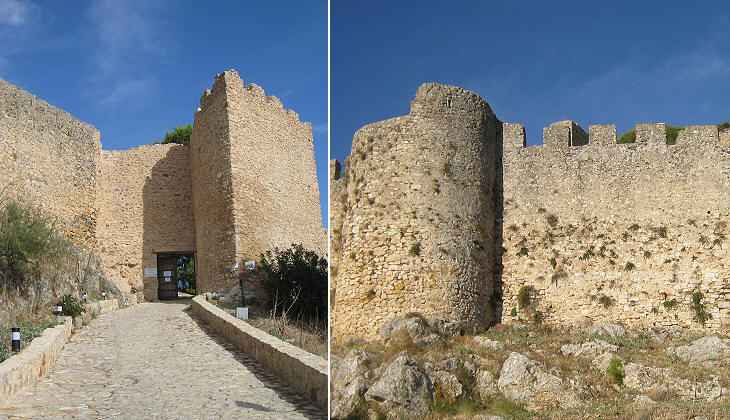 The castle has a double inclosure, a ruined church on the summit, a good cistern, and a house built by Aly Pasha for the Albanian garrison, which he placed here after he had taken Vonitza from the French, and when he probably expected to have been left in quiet possession of it by the Porte. It is armed only with three small cannon on the southern side. Leake
The entrance to the fortress is hidden behind a tower and this is typical of medieval warfare, when attacks were conducted by using battering-rams: a lateral gate increased the exposure of the assailants. The inner circle of walls was strengthened by round towers. There is little space between the outer and the inner walls and the latter are on higher ground; in this way assailants who had succeeded in breaching the former were impeded in continuing their attack. 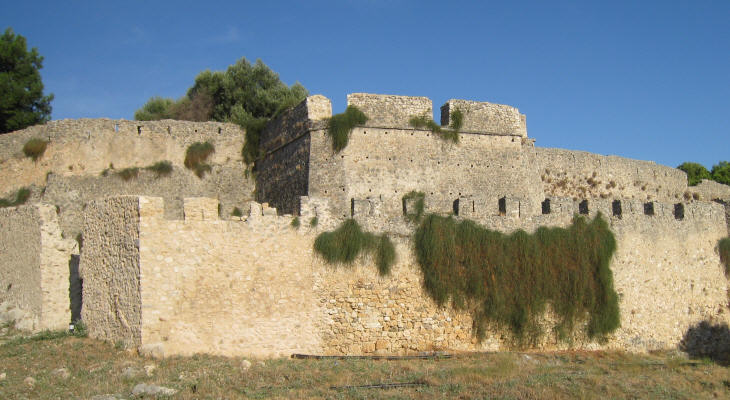 The commerce of this place consists chiefly in the exchange of grain, cattle, and firewood. (..) As to government, it is in the same condition with Prevyza and Parga. The treaty of 1800, which formed the Septinsular Republic, assigned these Venetian dependencies to the Porte, on the condition that they were to be governed by their own municipal laws, and to be exempt from the kharatj, but to pay the land tax and customs to an officer appointed by the Porte to receive them. The Aga charged with this office has a guard of five or six men. (..) He is in great dread of offending Aly Pasha, whose design of obtaining complete possession of the Ex-Venetian places is sufficiently evident. Leake
The last defence was entrusted with a stronghold where the residence of the commander and other key buildings were located. The square tower shown in the photo was most likely built by the Venetians.

(left) The commander's residence; (right) view towards the eastern part of the Gulf of Arta

I have searched in vain for any vestiges of antiquity in the Castle of Vonitza, or on any part of the hill, though the situation could hardly have been neglected by the ancients. In fact, ancient sepulchres are often found in the suburb of Boccale, and fragments in other places, sufficient to show that it was an ancient site. Leake
It is unlikely that many Venetians wished to become the commander of Vonizza. The fortress was the most advanced possession of the Republic on the Greek mainland, but because of its position inside the Gulf of Arta, ships did not call at Vonizza and life at the fortress was very monotonous. 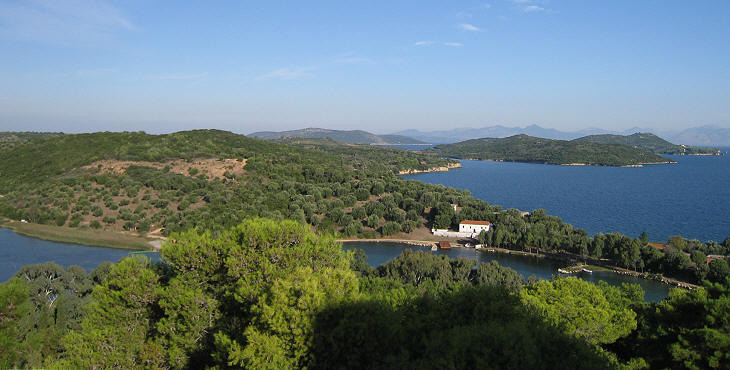 View of the western part of the Gulf of Arta

This morning he accompanied me to the castle which commands a fine view of the western part of the Ambracic Gulf, bounded by the hills of Suli and Ioannina. (..) The Bay of Vonitza is a very large semi-circular basin, opening into the gulf. (..) It is indented with several beautiful harbours, and has considerable depth quite to the shore of Vonitza. Leake
As usual the view from a fortress is very rewarding of the effort made to climb to its top. The closed waters of the Gulf of Arta give the impression of being part of a lake, rather than of a sea.

(left) The main church of Vonizza; (right) reliefs on its old portals

Vonitza contains 450 houses, divided into three separate quarters : namely, Recinto, which lies on the south-west, and is so called as being inclosed within two walls which descend to the shore of the shallow harbour from the summit of a conical hill, crowned with a Venetian castle; secondly, Borgo, which is a suburb on the western side of the hill; and thirdly, Boccale, which is divided from Borgo by gardens, and stretches eastward along the shore of the Bay. In Recinto are the ruins of a large church, having a Latin inscription over the door, placed there by the Venetians. The land of Vonitza belongs chiefly to nobles of Zante, Cefalonia, and Corfu, who became possessed of it under the Venetian government, and whose cultivators send the proprietors a fourth of the produce, being themselves subject to all the expences, including the land tax paid to the Porte. Leake
The fortress, which was used by the Greek army until a few years ago, does not have any winged lion of the Venetian period, but the church at the foot of the fortress has some small reliefs showing this symbol of Venice. The church was modified in modern times, but its ceiling retains a fine painting of the Venetian school. 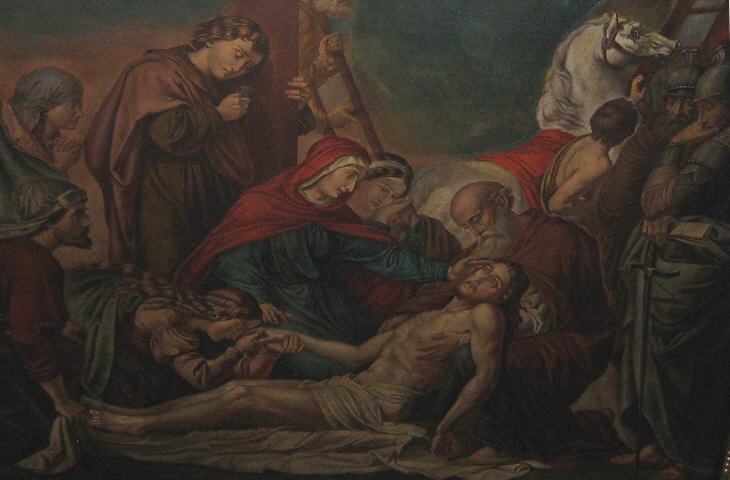 Painting inside the church, a detail of which can be seen in the image used as background for this page