- Corinto (Korinthos)
(detail of a 1651 engraving by Marco Boschini)

The ancient city of Corinth (in the background of this page the ruins of the Temple to Apollo), was dominated by an isolated high hill, commanding an impressive view over the Istmus of Corinth. 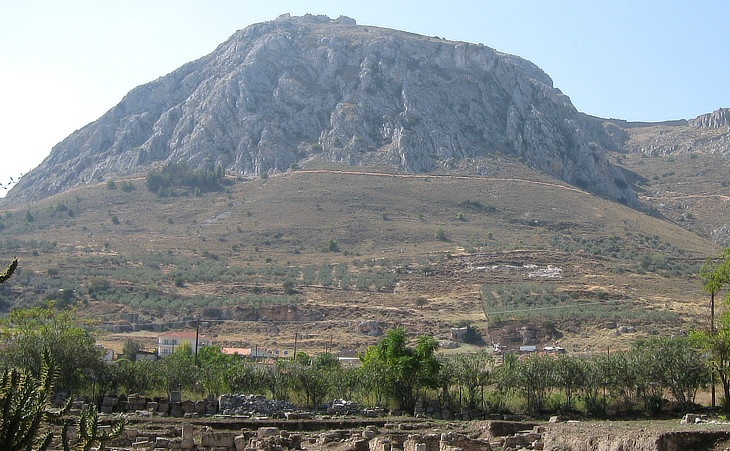 The castle on Acrocorinthus is kept in repair, and so strong that it stood out a siege of four months by all the Turkish army. (..) It is said that the city walls went to the top of this high hill, that is, probably the walls on both sides of the city were continued up to the castle. (..) To the south of the Isthmus is a very high steep bank, on which are remains of the wall that was built across the Isthmus by the Greek emperor Emanuel in one thousand four hundred and thirteen.
Richard Pococke - A Description of the East and Some Other Countries - 1745
The Acrocorinthus or citadel was one of the horns, on which Philip was advised to lay hold, in order to secure the heifer of the Peloponnesus. It has been also styled one of the fetters of Greece.
Richard Chandler - An account of a tour made at the expense of the Society of dilettanti - 1775
The stupendous rock of the Acrocorinthus, from whatever part of the Isthmus it is viewed, appears equally conspicuous: opposing so bold a precipice, and such a commanding eminence high above every approach to the Peninsula, that if properly fortified, it would render all access to the Morea, by land, impracticable; and as a fortress, it might be rendered not less secure than that of Gibraltar.
Edward Daniel Clarke - Travels in various countries of Europe, Asia and Africa in 1799-1804
Acrocorinth was always seen as holding the keys of Peloponnese and for this reason it was always a fortified place, although Corinth itself was for many centuries a negligible village.
Byzantines, Normans, Franks, Venetians, Ottomans, again Venetians and again Ottomans, they all built, destroyed and rebuilt walls and towers using the stones of the ancient Acropolis. There were also attempts to build a wall on the Isthmus itself. (left) One of the gates with a niche for the Venetian Winged Lion (see a fortress on Crete) and evidence of ancient walls; (right) a 1680 Venetian gun

In a country harrassed with frequent wars, as the Peloponnesus has since been, the Acrocorinthus was a post too consequential to be neglected. It was besieged and taken by Mahomet the second; the despots or lords of the Morea, brothers of the Greek emperor who was killed in defending Constantinople, refusing payment of the arrears of the tribute, which had been imposed by Sultan Morat in 1447. The country became subject to the Turks, except such maritime places as were in the possession of the Venetians. Chandler
When we returned to Corinth, we found that the Governor, (..) who considered us as nothing better than spies, would not grant us permission for entering within the Citadel: all that we could obtain was, a privilege of ascending to the summit of the rock, as far as the outside of the gate of the fortress. (..) All that we observed, in going up, were the remains of an antient paved way near the gate of the fortress, and the capital of an Ionic pillar lying near the same place. Clarke 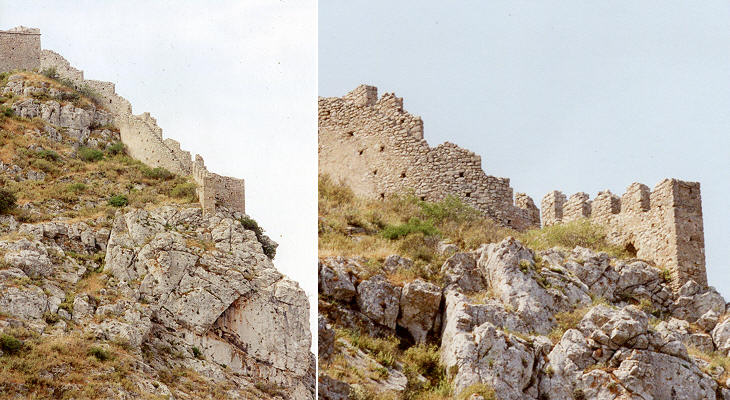 Walls of the fortress - western side

The walls were built taking advantage of the shape of the rocks which surround the top of the hill, leaving only one access to the top from the west. In particular Venice during the second occupation of Corinth in the early XVIIIth century protected the wide space at the top of the hill with three curtains of walls. Their remaining evidence calls to mind those which were built at Palamidi to protect Nauplia. View from the Temple to Aphrodite

The temple of Venus possessed above a thousand female slaves consecrated as courtezans. The prodigality of the merchants made the place so expensive, it was a saying, that not every man could go to Corinth. Chandler
I returned to Corinth, to enjoy the prospect from the Acrocorinthas at the setting of the sun. (..) We reached the gate just before sun-set; and had, as it is always usual from the tops of any of the Grecian mountains, a more glorious prospect than can be seen in any other part of Europe. (..) Upon the summit itself stood a Temple of Venus. (..) There is mention made of two structures only which can properly be considered as temples; that is to say, the Temple of Venus upon the summit of the rock; and that of the Mother of the Gods at some resting-place where there was a seat, perhaps about half way up. Fragments of the former will probably be discovered by future travellers who have liberty to inspect the materials used in constructing the foundations and walls of the citadel. Clarke
On the highest point of the hill a few lined stones are all that is left of a paleochristian church erected to cancel the memory of the Temple to Aphrodite, which was devoted to hierogamy or sacred prostitution. 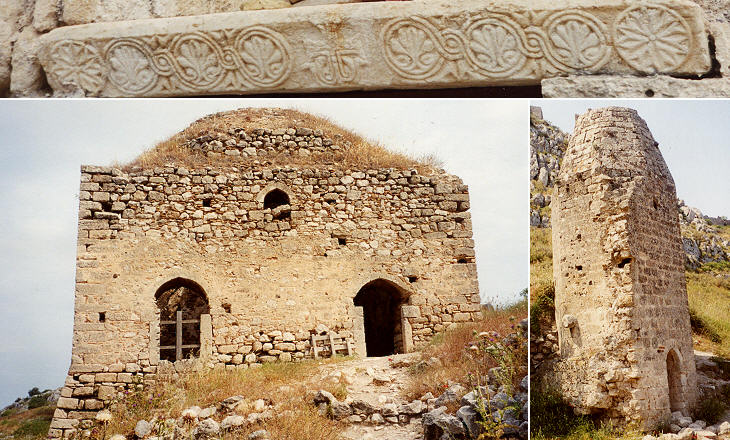 (above) Frieze above the entrance of a small church; (below-left) a mosque: (below-right) a minaret

The garrisoners were not alone in the fortress, many civilians lived in what was a small town. The Greeks were allowed to profess their religion, but only in a very modest way. The only evidence of a small building being a church is a little frieze over the entrance. The two mosques for the Muslims were more prominent buildings. More than 1,500 Turks and other Muslims sought refuge in Acrocorinth in January 1822, when the Greeks of Peloponnese rebelled. They eventually agreed to surrender to the rebels, provided that they could keep enough money to hire neutral vessels for their journey to Asia Minor. But what followed was one of the many massacres which have marred relationships between Greeks and Turks until today. 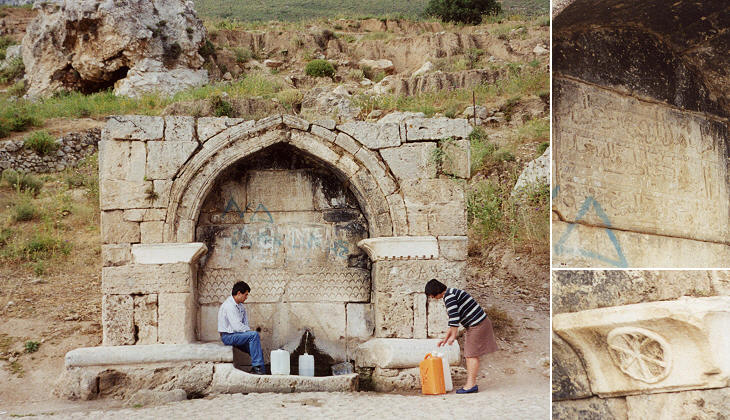 Fountain at the foot of Acrocorinth

At the foot of Acrocorinth a fine fountain with both Greek and Turkish reliefs is still in use. You may wish to visit the ancient city.