- Schiatto (Skiathos)
(detail of a 1651 engraving by Marco Boschini)

Views of the "bourtzi" (fortified islet) of modern Skiathos

October 1807. Skiatho, like Skyro has a harbour to the southward sheltered by an island. The port is called Oreokastro and seems to have been the site of an ancient town.
William Martin Leake - Travels in northern Greece - 1835
The town of Skiathos is relatively modern because until 1821 the inhabitants of the island lived on a fortified promontory on the northern coast: they resettled on a bay which was the natural harbour of the island and which was protected by a small medieval fortification, most likely built by the Ghisi in the XIIIth century. As other similar small fortresses protecting a harbour it is called bourtzi (see that of Napoli di Romania). 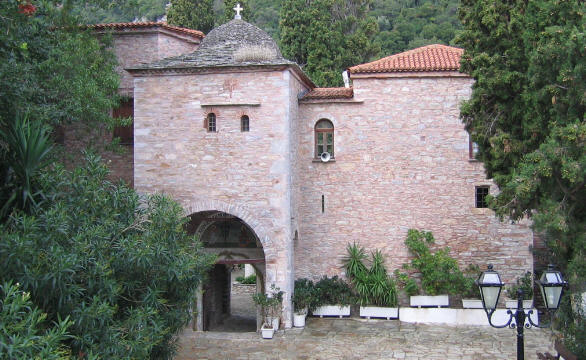 The road leading to the old capital first reaches Evangelistria Monastery, a fortified site with a commanding view over both the southern and the northern coasts of the island.

The church and its main altar

The church of the monastery retains on its main altar (decorated by a Bible between two scimitars, a very modern association of symbols) what is considered the first flag of Modern Greece, a white cross on a blue background. It was first raised in 1807 during a failed revolt against the Turks. The Greek flag was subsequently modified following the pattern of the American flag with the addition of nine white and blue stripes: a reference to the first nine syllables "Se gnoriso apo tin kopsi (We knew thee of old)" of the Greek national anthem "Hymn to Eleftheria (Freedom)", written by Dionysios Solomos, a poet from Zante.

The capital of the island was situated at the village, still called Skiatho, on a rock over the northern extremity of the island, as appears from an inscription existing there. Leake
The old town of Schiatto was located on an isolated headlong. High cliffs protected the site which could only be reached by land.

Only three small churches and a former mosque are not in ruins. Scattered stones and low walls give an indication of the old town's winding streets. The site allowed control of the channel between the island and the mainland. A lone cannon (which you can see in the image used as a background for this page) marks the site of a small fortress on the headlong highest point.

A drawbridge was the only access to the town: it was protected by two towers. The fortress was considered impregnable. In 1660 however, the Venetian admiral Francesco Morosini, in charge of the defence of Candia, at the time besieged by the Ottomans, launched an offensive against the Aegean Islands which refused to financially help the Venetians, and because Schiatto refused to pay, he attacked and seized the fortress.