Milo and we immediately associate this name to the statue of Venus (see the image used as background for this page), found by chance in April 1820 and soon shipped to Paris by Louis Brest, the French vice-consul in Milo. It is a Hellenistic statue, most likely brought to Milo when the island was a possession of the Ptolomies, the rulers of Egypt from the death of Alexander the Great until that of Cleopatra. 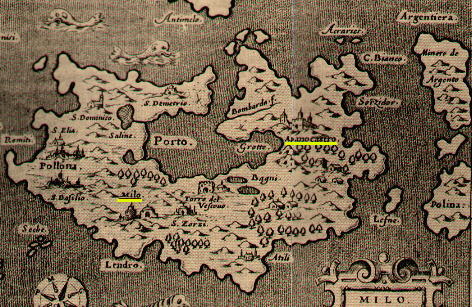 Milo, called formerly Melos. Is a large Island, being between 80 and 90 miles in circumference. (..) The land is not very high, only to the South are two Mountains, which to those who come from Cerigo, seem like the tops of two Sugar loaves. It has a very faire Harbour, large, and secure against all winds. Here Privateers do usually come to make up their Fleets, and it is most commonly their Rendezvous, at their first coming into the Archipelago. (..) From a Mountain to the South in a clear day the Island of Candia may be discern'd. (..) All the whole Island is esteemed to have fire under it, which is thought to consume the stones.
Bernard Randolph, b. 1643. The present state of the islands in the archipelago
Milo was known for its mines and for its natural harbour; the map shows the site of the salt-works and of the silver mines (on the small island of Argentiera, today Kimolos). The main town of Milo during the Latin rule was next to the inner basin of the island, while the ancient one was located on a hill (Apanocastro) controlling the entrance to it. 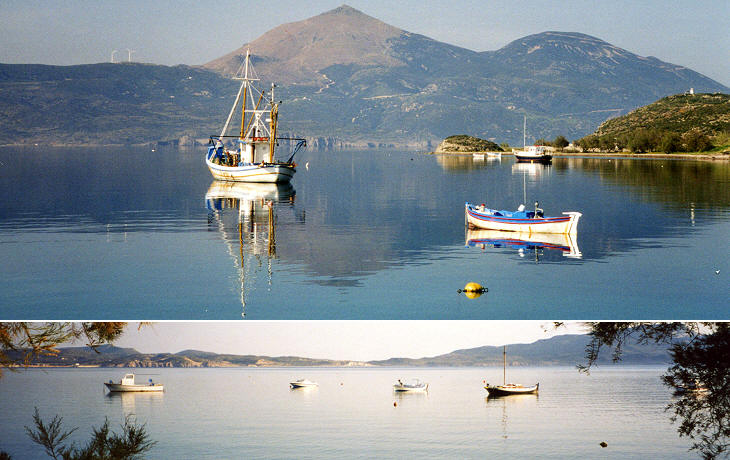 Views of the natural harbour

On the 3d of June 1815, a strong north-east wind stopped' our progress, and, being off Milo, we at noon fired a gun for a pilot, who came out to us. The sailors of Milo are reputed to be the best pilots in the Archipelago. (..) In the afternoon we anchored in the bay, which is one of the best harbours, in the Archipelago, being about six miles long and three and a half broad, and not more than three-quarters of a mile wide in the entrance. (..) The hills are very rocky, and much of the stone is of a reddish iron-colour, as if the island were volcanic.
William Turner - Journal of a Tour in the Levant - 1820.
Melos is a long, narrow island, shaped like a horseshoe round its glorious harbour; at one extremity is the inhabited part, the Kastro, and the villages around it; at the other extremity is the lofty summit of Mount Prophet Elias; whilst the central portion is comparatively flat and fairly fertile. No island in the archipelago has suffered more from the vicissitudes of the last century than Melos. During the Turkish rule it was prosperous, being the home of hundreds of pilots employed by the French corsairs, who were, comparatively speaking, at that time masters of the Levantine seas. (..) They brought their prizes here to Melos, as to the central fair of the archipelago, and the townsfolk of Melos welcomed them gladly. (..) We set off in a boat to cross the harbour. As we went we had a better opportunity of realising its beauty and extent: it could hold all the navies of the world within it, and it is protected by an island at its mouth.
James Theodore Bent - The Cyclades - 1885
Milo has a volcanic origin and this explains its shape. The inner basin is so shielded from the open sea that the water is almost still. Such a safe haven always attracted merchant and military fleets. In the XVIIth century the Christian corsairs and the Maltese Knights who attacked the Ottoman ships came here to sell their loot and have a rest.

Ruins near the site of Old Milo

There is but one Town, which stands in a very fine plaine, being very well built with good stone. The Capuchins have a Church, and Convent; The Privateers continually bring them some presents, and most of the Islanders give them a great deal of Respect. (..) Very seldom do the Turks come to disturb the inhabitants, for they take care to send their Taxes to Scio to be ready against the Captain Basha comes thither. Randolph
The country on the coast of the bay is very hilly, and must have been beautiful when well cultivated and covered with vines, as it was when the island was well peopled; but the plague made such ravages in it a hundred years ago, that the population of the whole island is now only 2,300, whereas before that time the town alone contained 10,000. The depopulation has been more systematically promoted by the badness of the water and the unwholesomeness of the air, which are said to be strongly impregnated with sulphur. Turner
At the beginning of this century, the inhabitants thought the island was under a curse. The old capital was abandoned, numbers fled; and if it were not for refugees from Crete, Melos would be now almost uninhabited. Only 7,000 are now left. (..) Now we were approaching the ill-fated town of Zephyria, until fifty years ago the recognised capital of the island, and bearing the very ancient name by which Melos was once known. It is built at the end of a plain, along which a stagnant stream spreads itself out in winter, but which is in summer a waste of salt and pestilential exhalations. No wonder Zephyria was unhealthy, a perfect hotbed of pestilence. (..) Here was the palace where the dukes of the Crispi family held their court, and now the outer streets are mere masses of ruins with the roofs tumbled in, a home for ravens and bats. A few houses are used as stores for those who farm the neighbouring fields. Bent
During the XVIIIth century the town of Milo was abandoned for a series of pestilences and the inhabitants moved to the fortress of Kastro which had been the Acropolis of ancient Milo. Little is left of the fortifications of the town apart from a tower. 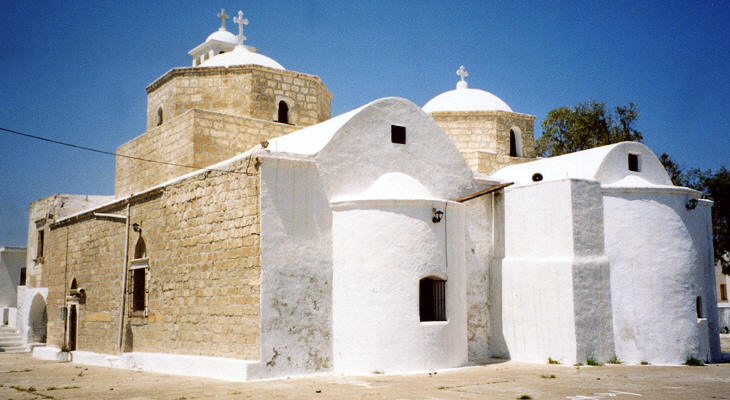 Milo, the capital, which is built on a plain, about two miles from the coast, is now almost in ruins, and the narrow streets are choked with the materials of fallen houses. The inhabitants, however, appeared cheerful: the women (who in the evening sat spinning cotton at the doors) nodded to us affably, and were very willing to shew us the inside of their houses, which were generally neat and clean. Turner
The town must have been well and substantially built; some good stone houses and several churches are still standing, but all untenanted and empty. Bent
The site of the town has been reclaimed and it is farmed. Panagia Portiani has been restored: the name means "next to the gate" because most likely it was immediately inside the walls of Milo. It is actually two churches (Assumption of the Virgin and St. Haralambos) which have been combined into one. It is quite common to find twin churches in the parts of Greece which had been under Venetian rule. Often one church was Orthodox and the other one was Roman Catholic, e.g. at Moni Arkadi on Crete. 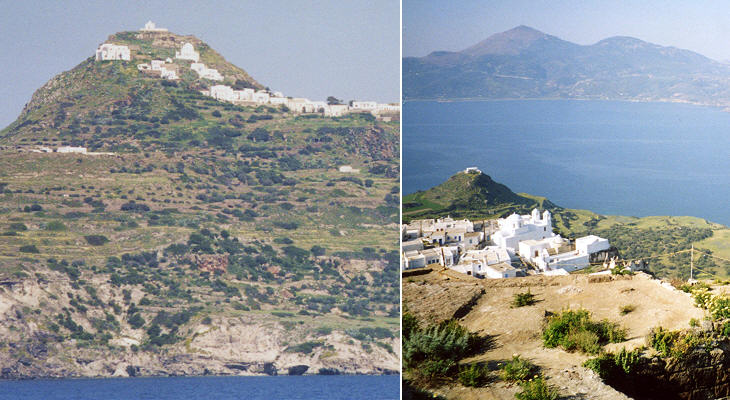 (left) Kastro; (right) view over the narrows leading to the harbour

We rode to the town of Castro (the second on the island) on donkies, equipped with a clumsy wooden saddle, on which the rider sits sideways, like a woman, and without a bridle. The path lay alternately over rocky hills and rich fields covered with vines, olive and fig trees, and oleanders, which latter grow here wild in great perfection. Castro stands on the top of a high mountain shaped like a sugar-loaf. Its streets, if it be allowed to give that name to unpaved passages about four feet wide, overhang each other, and are ascended by irregular stone steps. The inhabitants live in a very patriarchal manner, two or three generations of a family occupying the same house; and when a father gives his daughter in marriage, he makes over to her husband his house with all its furniture, and either remains in it as a guest, or finds another for himself. Turner
Climbing to the top of Kastro offers rewarding views over the narrows leading to the inner harbour. The inhabitants of Kastro gradually preferred to settle on a terrace below the top of the hill. A house of Kastro and the view it enjoys

We entered the house of our Vice-Consul (built of stone, as were all those both of Milo, and Castro) of which the interior was neatly white-washed, and furnished wooden chairs and tables, for most of the Greek islanders retain several European habits, which were taught them by the Venetians. We were presented with almonds and wine, of which latter the island furnishes two sorts, red and white, both very sweet. (..) At the bottom of the northern side of the mountain, on which stands Castro, are ruins of the ancient city; but they consisted only of a few fragments of marble bearing mutilated inscriptions, and some pillars of granite. Even these remnants will soon cease to mark the spot, for the Greeks carry them off to adorn their churches. Turner
Kastro crowns a lofty conical hill, half-way up which we had to climb before we reached our destination. (..) The morning was bright and fine, and we were enchanted with our view. Bent
There are very few remaining houses in Kastro. Another reason for this is that during World War II the Germans placed an anti-aircraft gun on its top and the site was bombed by the Allied forces.

The Kastro and the surrounding villages are built of a light stone, which takes a darker colour in the air, having somewhat of a ginger-like appearance. (..) Over a side door are the arms and initials of John Crispi, 1553, one of the last dukes of Naxos. Bent
The few remaining buildings of Kastro show some of the reliefs which were brought here from Old Milo, including a coat of arms of the Crispo family. Icons from Old Milo at a Holy Week procession

The priests (papas) are distinguished from the other inhabitants only by their beards on week days, when they are generally employed in teaching the children to read. Turner
We were at once struck with the great feature of Melos; namely, the quantity of churches and miracle-working pictures. This is easily accounted for by the numerous plagues which have swept over the island. (..) That evening we slept at Adamantas, the village down by the port, about half an hour's ride from the Kastro, where all the business, little though it is, of modern Melos is carried on; and here has been erected a new church (..) and from Zephyria they have brought (..) all the sacred treasures. Bent 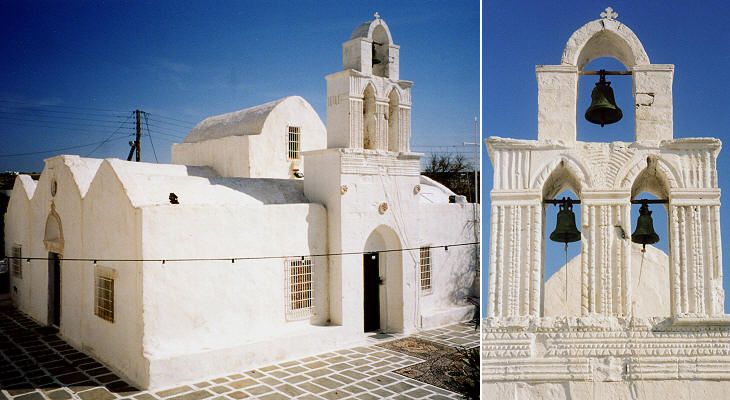 The harbour of Adamantas, is where many of the fugitives from Zephyria have established themselves. Bent
The old church of Agia Triada in Adamantas (today the largest town on the island), retains an interesting decoration of the bell tower (notwithstanding the whitewashing).

A small stone tower in Adamantas has a medieval appearance, but it was built during WWII to provide ventilation to the shelters where the inhabitants had to hide. A French war cemetery brings back more intriguing memories. It is dedicated to the French soldiers and sailors who were buried in Milo during the Crimean War (1854-1856). They died of sickness or wounds while they were being brought back to France from the battlefields of Crimea.