- Grambusa (Gramvousa)
(detail of a 1651 engraving by Marco Boschini) 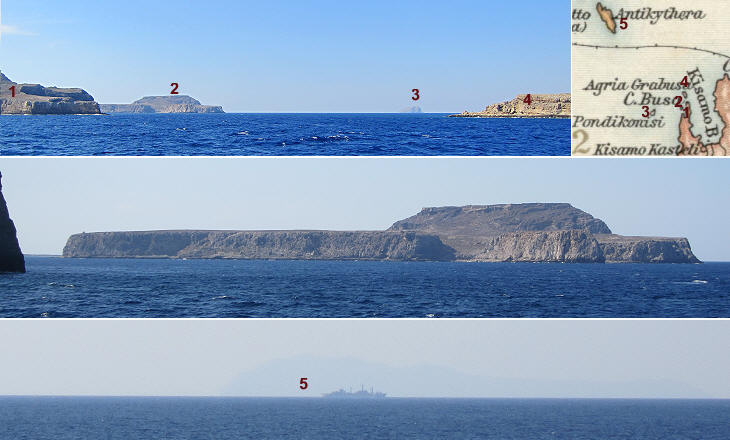 At the end of Cape Buzo there is a small uninhabited island, now called Grabusa Agria (Wild Grabusa). (..) Cape Buzo, is the old promontory of Corcylus; it is made by the mountains now called Grabuse; the island appears as if it was the end of the cape. A little to the west of the cape is the island and fortress of Grabusa. (..) I saw from a height the high island Sinigluse or Cerigotto.
Richard Pococke - A Description of the East and Some Other Countries - 1745.
Grambusa aka Grabuse (Gramvousa) is an islet very close to the north-western coast of Crete and in a strategic position for the control of the channel between Crete and Antikithira (Cerigotto). In 1579 the Venetians built a fortress there to provide protection for their merchant ships in case of attack by Ottoman corsairs. Imeri means tamed whereas another nearby small island is called Agria (wild), because it is totally void of any signs of human presence. 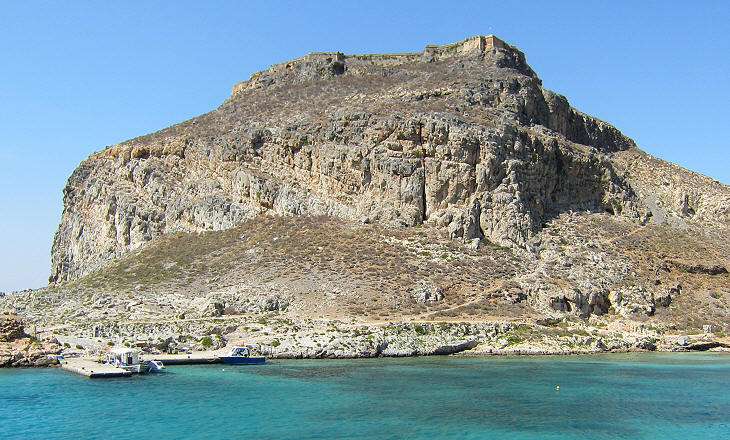 The landing site and the path leading to the fortress

Carabusa to the West end of the Island, about six miles from the main, having a very good Port between the Islett and the main Island: the Castle is very strong, having about 80 Guns.
Bernard Randolph, b. 1643. The present state of the islands in the archipelago.
The fortress was built on a rock which could be accessed (with difficulty) only from one side. Grambusa did not have a proper harbour, but the rock was high enough to shelter the ships from meltemi, the strong dominant north wind that blows in the Aegean Sea from May to September, which was the sailing season in the past. 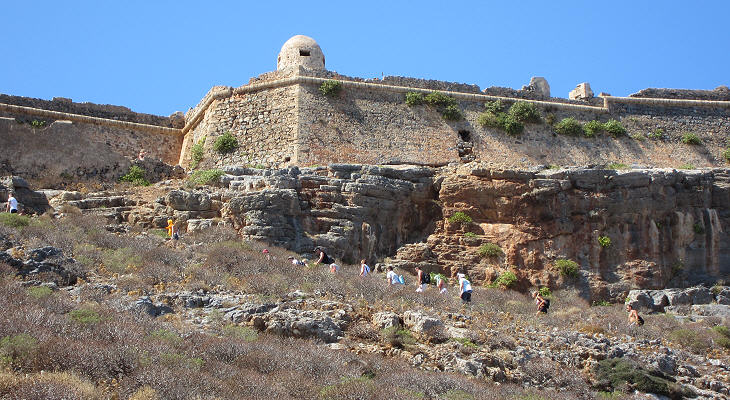 En route to the fortress

Today Grambusa is completely unpopulated, but in summer it is easy to reach because one day cruises departing from Kissamos/Kasteli stop at the island for about 90 minutes. The time is sufficient to visit the fortress along a steep and winding path.

In the late Warr it withstood several assaults, but it lying so far from any considerable City, the Turks did not so much mind it as they did Suda. Here is a continual Garrison of Venetian soldiers and a Proveditore, who is under the Inquisitore at Suda. In time of peace with the Turks, they have a continual trade and very good correspondence with them, having all sorts of provision at very reasonable rates. Randolph
During the long War of Crete (1645-1669) the Ottomans did not attempt to seize Grambusa and this allowed the Venetians, who retained possession also of the fortress of Suda, to supply Candia during its long siege. When eventually the Venetians agreed to surrender that town they retained control of Grambusa, Suda and Spinalonga, another fortress on an islet opposite the north-eastern coast of Crete. 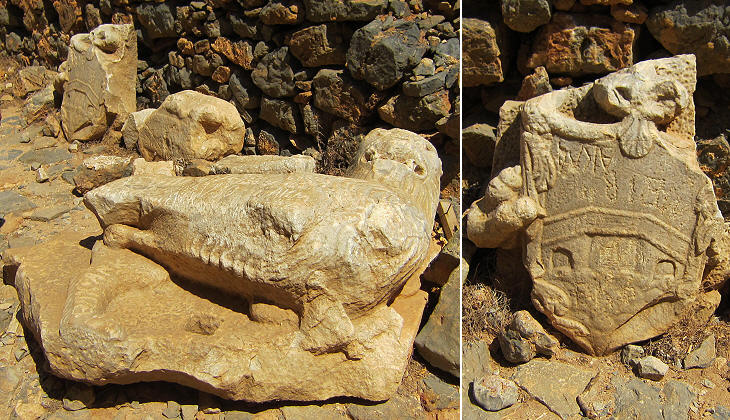 It is a modern fortification, built by the Venetians, and was betrayed to the Turks by some officers in it, in one thousand six hundred and ninety one, which was about a year before the descent of Mocenigo on this island. It is now a garrison of about a thousand Turks, who were such bad neighbours that the whole promontory is now uninhabited. Pococke
In 1691 the Venetians, after having seized Malvasia, the last Ottoman fortress in the Peloponnese, decided to make an attempt to reconquer Crete. This decision was not unexpected and the Ottomans realized that control of Grambusa was crucial for the defence of the island. The fortress had the fame of not being pregnable, but the Ottomans managed to bribe one of the chief officers and with his help they entered the fortress and captured its Venetian commander. The traitor, a mercenary, spent the rest of his life at Constantinople where he was known as Capitan Grabuse. 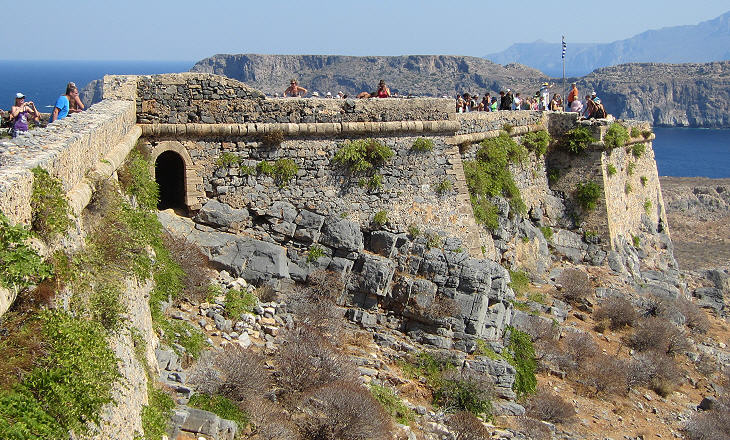 At the Peace of Passarowitz (1718) Venice acknowledged the loss of all its possessions in the Aegean Sea. The peace marked the end of the wars between the Republic and the Ottoman Empire; in this new context the importance of Grambusa greatly declined.
In 1825 a group of Cretan insurgents seized the fortress; an Egyptian expeditionary corps quelled the Cretan rebels, but Grambusa, notwithstanding a long siege, was not retaken. 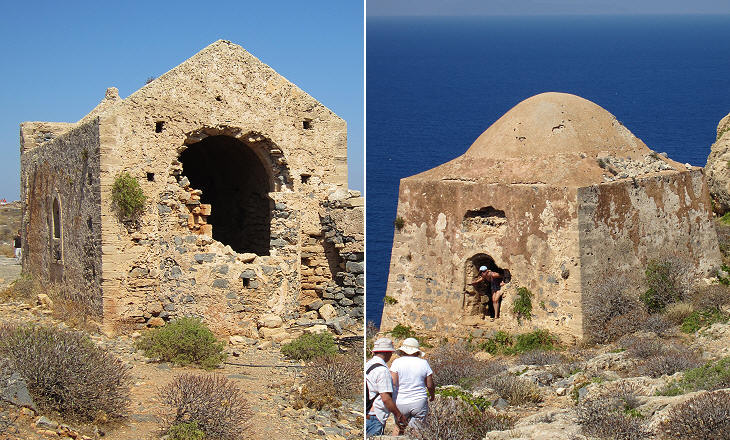 Because of the total lack of resources of the small island, its occupiers resorted to piracy; they did not attack Egyptian and Ottoman ships only, but also those sailing under other flags. In January 1828 the pirate ships were sunk by a British and French fleet. A frigate commanded by Capt. Charles Yorke (from 1834 4th Earl of Hardwicke) was posted at Grambusa to ensure the island did not become a nest of pirates again. The fortress was returned to the Ottomans after they recognized Greece as an independent country. 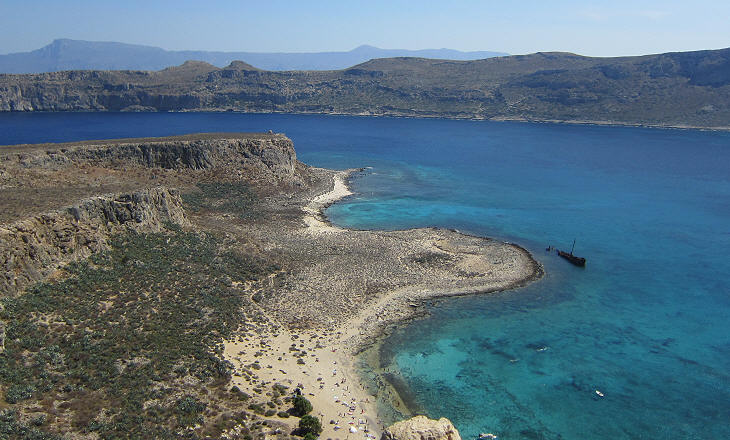 In recent years Crete has experienced a dramatic development of its tourist facilities, which however has not affected this remote corner of the island. After the cruise ships have returned to Kissamos, only ghosts watch over the abandoned fortress, the rusty wreck of a small steamer (which is shown in the image used as background for this page) and the silent lagoon of Balos. 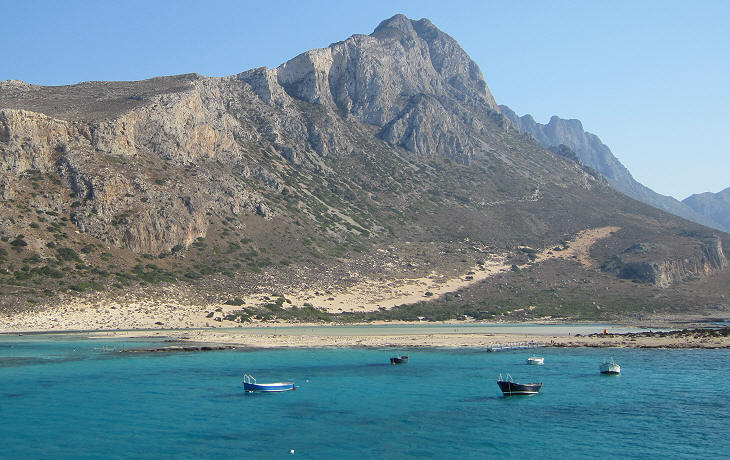 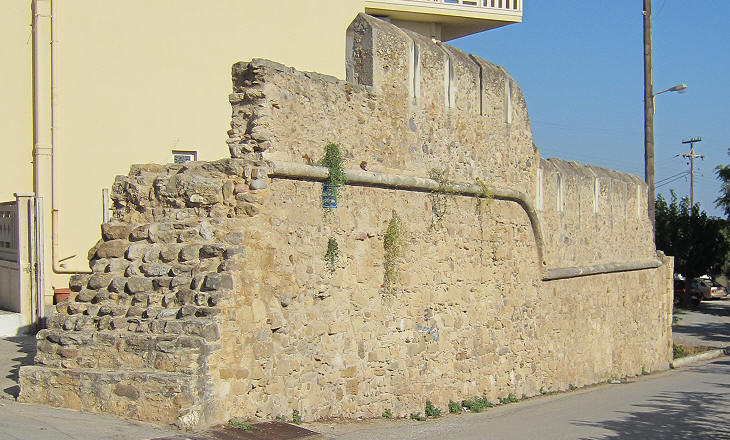 Remaning walls of the town/castle

Near the west corner of the bay, was the port and town of Cysamus: now called Chisamo; it was the port of the antient city Aptera. (..) The Turks who inhabit the place live in a castle, and in a small village or town walled round adjoining to it, both which together are not above half a mile in circumference; as they are so near the sea, they would not be secure from the Corsairs without this defence. Pococke
The small town of Kasteli (also known as Kissamos) in north-western Crete retains in its name a memory of the small Venetian fortress which protected it. In 1646 the Ottomans easily seized it and cut to pieces forty soldiers who refused to surrender.