Links to this page can be found in Book 9, Map C3, Day 7, View D8, Rione Regola and Rione Parione. 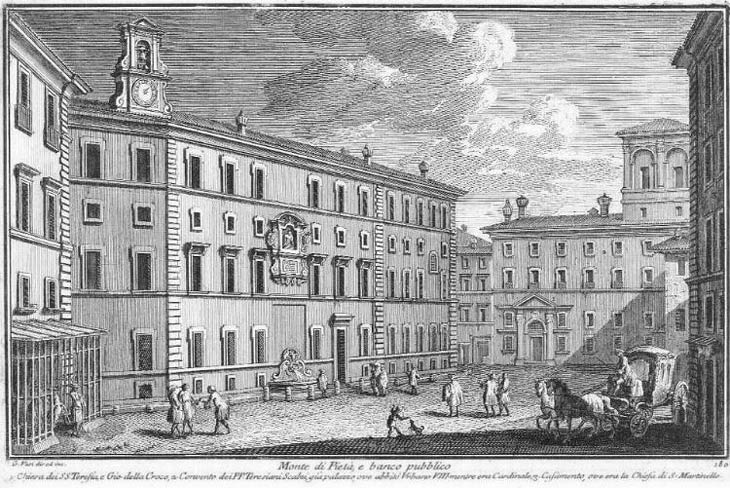 J. W. Goethe arrived at Rome on November 1, 1786; his diary entry for November 27 contains a harsh statement on the level of crime in the city: All I can say about the Italians is this: they are children of Nature, who, for all the pomp and circumstance of their religion and art, are not a whit different from what they would be if they were still living in forests and caves. What strikes any foreigner are the murders which happen almost every day (translation by W. H. Auden and E. Mayer - Collins 1962).
This 1759 etching by Giuseppe Vasi shows that Papal authorities made some efforts to reduce crime by opening a bargello (police station) outside Palazzetto Alibrandi near Monte di Pietà, a charitable institution from which people could borrow sums of money by pledging their valuables. Because of this there was a high risk of thefts and robberies being committed in the area.
The view is taken from the green dot in the 1748 map below. In the description below the plate Vasi made reference to: 1) SS. Teresa e Giovanni della Croce; 2) Monastery of the Discalced Carmelites, formerly the palace of Pope Urban VIII when he was a cardinal; 3) Building where once was the church of S. Martinello (S. Martino ai Pelamantelli). The map shows also 4) Monte di Pietà; 5) Cappella della SS. Trinità; 6) S. Barbara dei Librai; 7) Palazzetto Alibrandi; 8) S. Salvatore in Campo. The dotted line in the small map delineates the borders among Rione Parione (upper section around No 6), Rione S. Eustachio (upper right quarter) and Rione Regola (the rest). 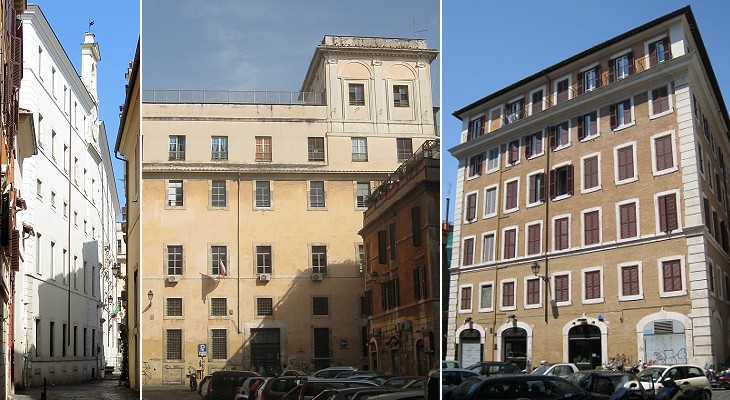 The Monte Pieta, was instituted as a bank for the poor, who, if the sum be not great, may have money upon pawns. To this joins St. Martino, to which belongs a Schola, or Corporation, that do many works of charity.
John Evelyn's Diary and Correspondence - 1644-1645
The etching by Vasi showed the square in a moment of transition because in that same year Palazzo di Urbano VIII was sold to Monte di Pietà, the adjoining church was closed and the building was modified to accommodate offices of the institution. Other changes occurred in the XXth century when it was turned into a school. 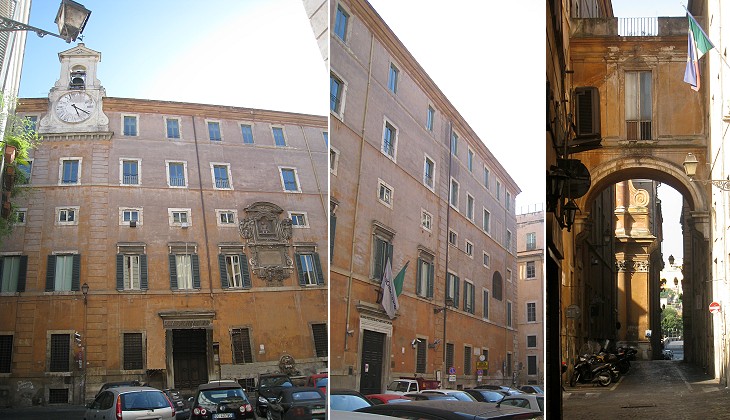 (left) Left side of the façade where a window was replaced by a portal; (centre) right side with the original portal; (right) bridge which linked Palazzo del Monte di Pietà with Palazzo di Urbano VIII. The street leads to SS. Trinità dei Pellegrini and it ends at Ponte Sisto

Palazzo del Monte di Pietà has been modified to a very limited extent. In 2014 it was repainted in the light colour it had in the XVIIIth century (see a page on the changes of colour which have occurred in Rome in recent years). 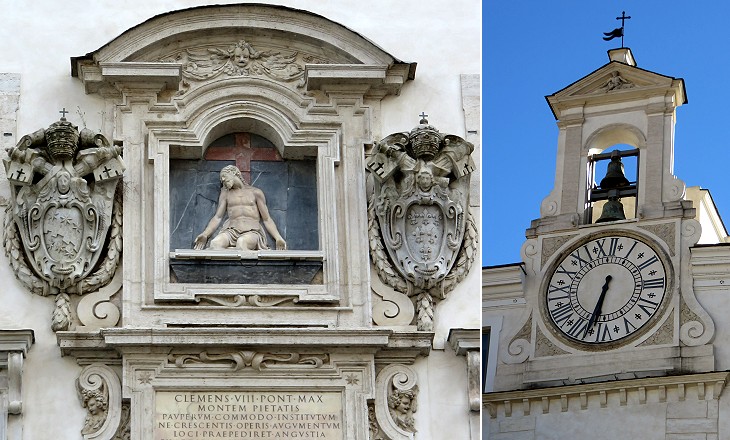 (left) Relief portraying Jesus in the sepulchre between the coats of arms of Pope Clement VIII (left) and Pope Paul III; (right) clock

Monte is the Italian word for mountain, but it also indicated in the past an amount, so Monte di Pietà (Mount of Pity) was a charitable institution which lent money without charging interest with the objective of helping the poor. The first Monte di Pietà was founded in Perugia in 1462; Monte dei Paschi di Siena was founded in 1472 with the same purpose and it is the oldest surviving bank in the world.
The Roman Monte di Pietà was founded in 1539 at the time of Pope Paul III and in 1603 it was moved to a palace which belonged to the Santacroce and which was designed by Ottavio Mascherino (the left section of the current building); Cardinal Pietro Aldobrandini, nephew of Pope Clement VIII commissioned Carlo Maderno the enlargement of the palace. Monte di Pietà lent sums on pledges, without demanding interest, but this term was applicable only to small amounts; on larger sums it charged up to five per cent. You may wish to see similar institutions in Avignon and Malta. (left) Fountain with the heraldic symbols of Pope Paul V; (right) courtyard with another fountain

In 1613, during the enlargement of the building, the neighbourhood was supplied with water from Acqua Paola and Maderno designed two fountains to distribute it. The palace was enlarged also on the rear where it faced SS. Trinità dei Pellegrini; the image used as background for this page shows a monogram of Monte di Pietà which decorates that part. 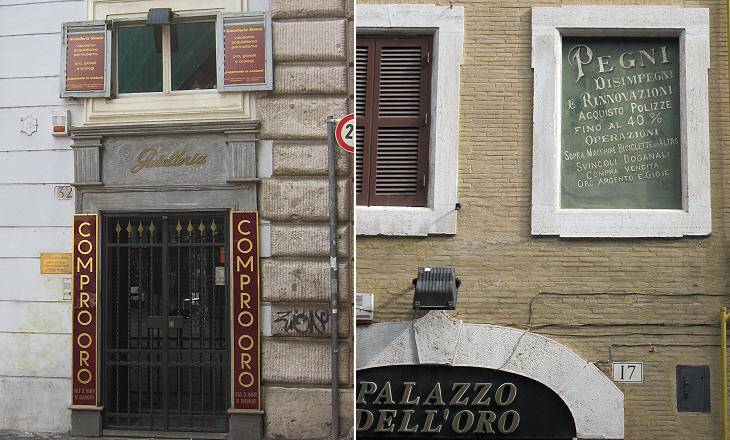 Shops buying gold (It. oro) and jewels and redeeming pledges

Today Monte di Pietà belongs to an international auction house. The square and the nearby streets house several businesses related to the traditional activity of the institution. Those interested in old jewellery may find some interesting pieces. 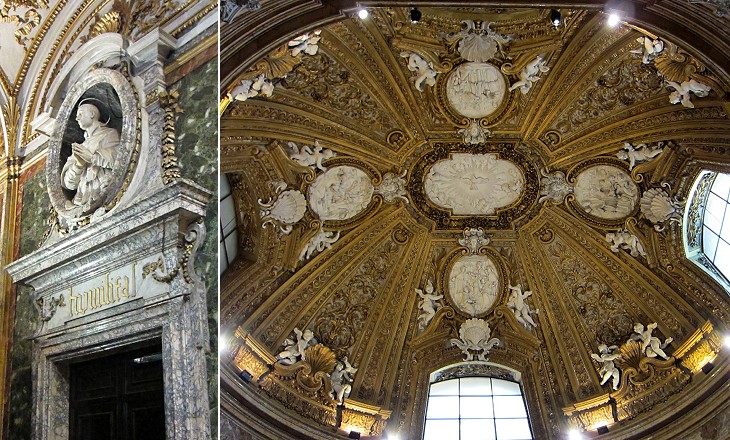 Monte di Pietà built one of the most lavishly decorated chapels of Rome, although it was meant to be a celebration of Charity. The chapel was designed by Francesco Peparelli in 1639-1641, but the decoration of its interior was completed over a period of almost a century by Giovanni Antonio De Rossi and Carlo Bizzaccheri. 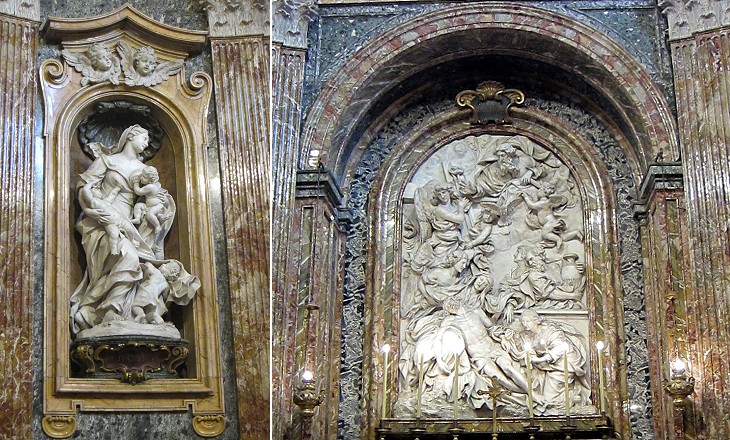 The altars were not decorated with paintings, but only with altar reliefs, similar to those at S. Agnese in Agone. The chapel has no direct access from the street and it is open to the public on rare occasions. 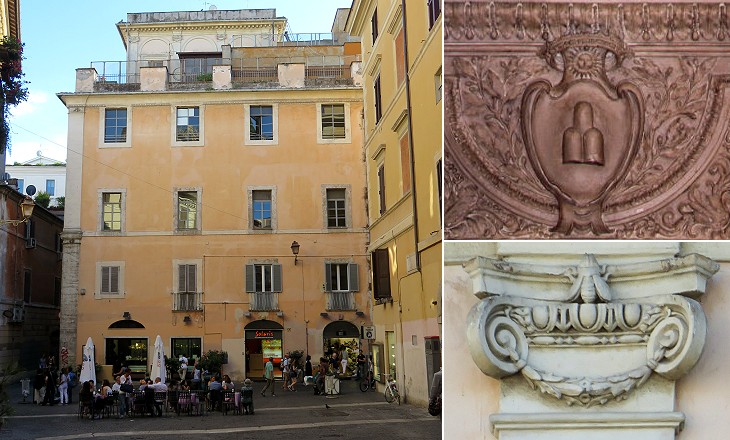 (left) Side on Via dei Giubbonari (which links S. Carlo ai Catinari with Campo dei Fiori) seen from S. Barbara dei Librai; (right) decorations with the heraldic symbols of the Barberini (bees and the sun; the three mountains are a symbol of Monte di Pietà)

The palace was built over a long period of time (1581-1644) by various members of the Barberini family, including Pope Urban VIII. Flaminio Ponzio, Carlo Maderno and Francesco Contini were among the architects involved in its design. In 1734 the Barberini sold it to the Discalced Carmelites, who turned the entrance into a church dedicated to St. Teresa of Avila and St. John of the Cross, the founders of their order; the church however was deconsecrated in 1759, when the building was sold to Monte di Pietà. The palace had a fine loggia, but in general today its exterior is anything but interesting; the interior retains some rooms with the original decoration. 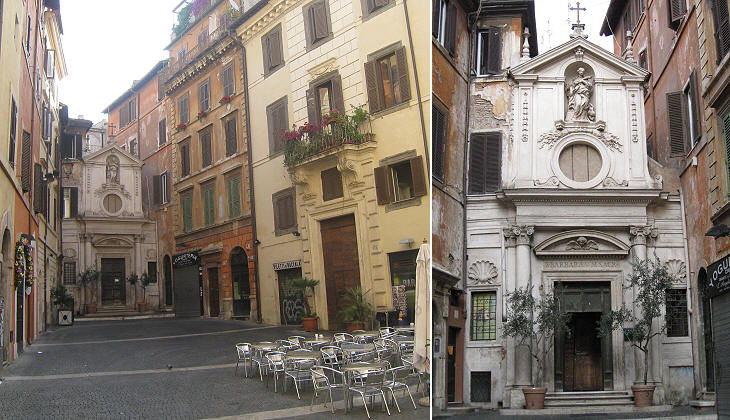 In Via dei Giubbonari a small square opposite Palazzo di Urbano VIII houses S. Barbara dei Librai and Palazzo Ghetti, two examples of minor baroque architecture. In the XVIIth century most booksellers (It. librai) had their shops at Piazza di Pasquino which was also known as Piazza dei Librai. In 1638 they bought a small medieval church dedicated to St. Barbara; the building was redesigned by Giuseppe Passeri in 1680; the booksellers maintained the dedication to St. Barbara, a traditional patron of the gunners, but in paintings inside the church she was portrayed with St. Thomas Aquinas, their patron saint. You may wish to see a directory of churches belonging to a guild. 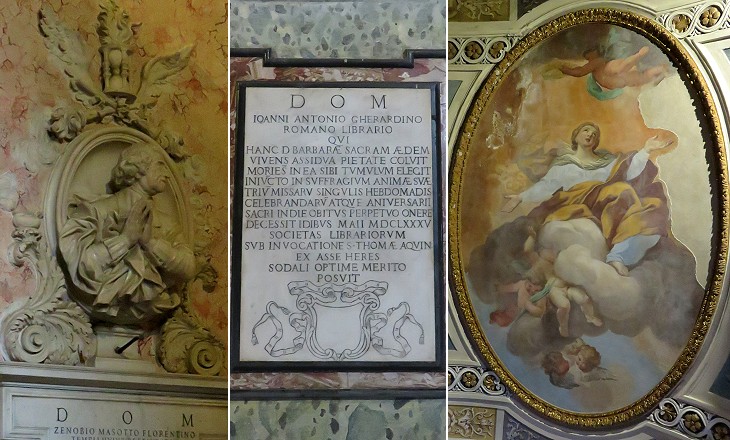 (left) Monument to Zenobi Masotti from Florence who promoted the restoration of the church in the XVIIth century. Similar to other booksellers of his time he was also the publisher of some of the books he sold; (centre) gravestone of Giovanni Antonio Gherardino (d. 1685) who made a bequest to the guild; (right) ceiling fresco portraying St. Barbara by Luigi Garzi (late XVIIth century - see other paintings by Garzi at S. Paolo alla Regola and S. Caterina a Magnanapoli) 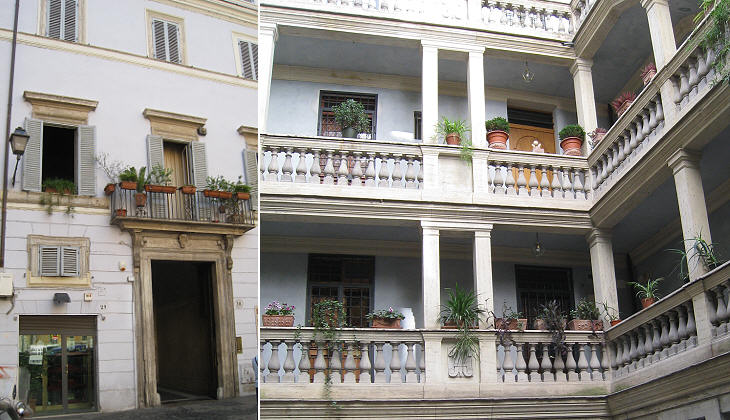 The small palace shown by Vasi on the left side of the view has a very interesting courtyard where an open staircase leads to the apartments. It is a design very unusual in Rome, but largely utilized in northern Italy, especially near Milan. 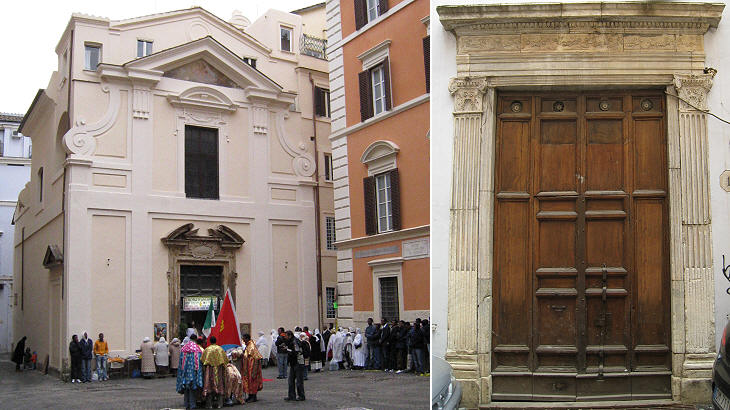 In 1638 Pope Urban VIII allowed the administrators of Monte di Pietà to enlarge their building by acquiring and pulling down an adjoining block of houses, which included a small church dedicated to the Saviour. The administrators had the obligation to rebuild the church which they did in 1640 (design by Francesco Peparelli).
During the XXth century the church was closed for extended periods of time with consequent deterioration of its interior and alteration of its external aspect (including an apartment above the church). It is now assigned to the Eritrean Orthodox Christians living in Rome. You may wish to see their celebration of Michaelmas.