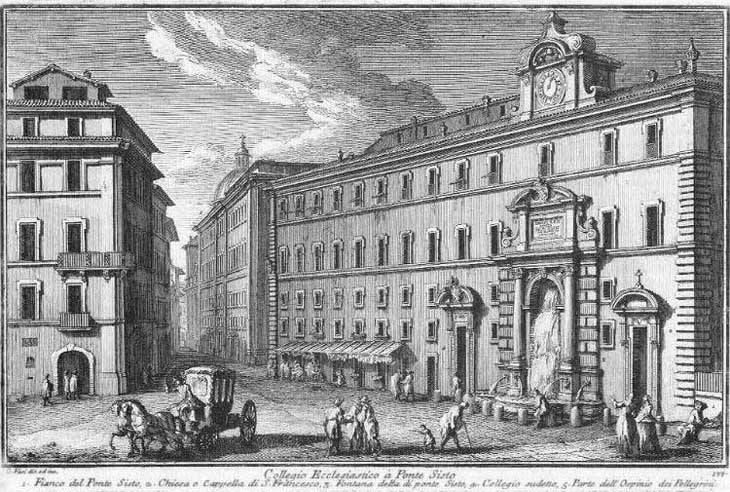 In this 1759 etching Giuseppe Vasi called Collegio Ecclesiastico this large palace, because at that time it housed old and poor members of the clergy, but the building was best known as Ospizio dei Mendicanti, because it was built by Pope Sixtus V in 1586 to keep beggars and tramps off the streets. It was situated at the eastern end of Via Giulia, very near Ponte Sisto, and it was designed by Domenico Fontana. The palace was embellished with an elegant clock; the fountain was added by Pope Paul V in 1613.
The view is taken from the green dot in the 1748 map below. In the description below the plate Vasi made reference to: 1) Part of Ponte Sisto; 2) Cappella di S. Francesco or S. Francesco ai Mendicanti; 3) Fontana di Ponte Sisto; 4) Collegio Ecclesiastico; 5) Dome of SS. Trinità de' Pellegrini. 1) and 5) are shown in other pages. The map shows also 6) S. Caterina da Siena a Via Giulia and 7) Conservatorio delle Zoccolette.

In the 1880s high walls were built on the river banks to avoid floods; Lungotevere, roads along the river, were built to facilitate traffic and Collegio Ecclesiastico was reduced in size and given a new façade with porticoes; the new design is typical of some cities in northern Italy such as Turin, the first capital of the Kingdom of Italy, and Bologna, but it does not fit in the Roman urban context. The building still retains the reddish paint which was typical of Rome until a few years ago. 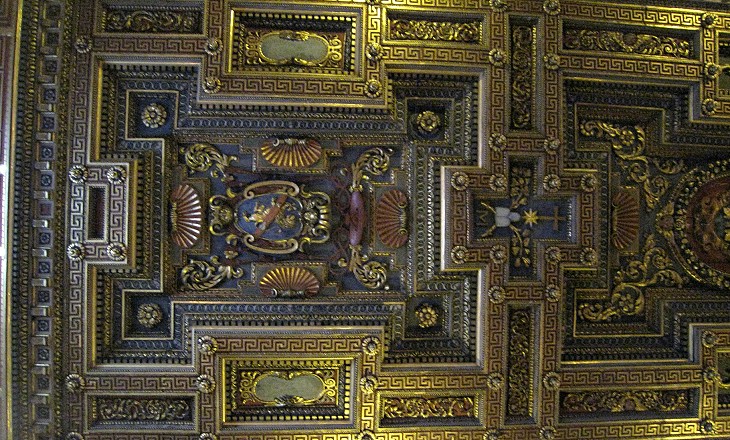 Pope Sixtus V provided the charitable institution with a small church dedicated to St. Francis of Assisi; it had also an independent entrance to the right of the fountain. It was pulled down in 1885; its fine wooden ceiling with the heraldic symbols of the Pope was moved to a nearby church. You may wish to see a page on the ceilings of the churches of Rome. 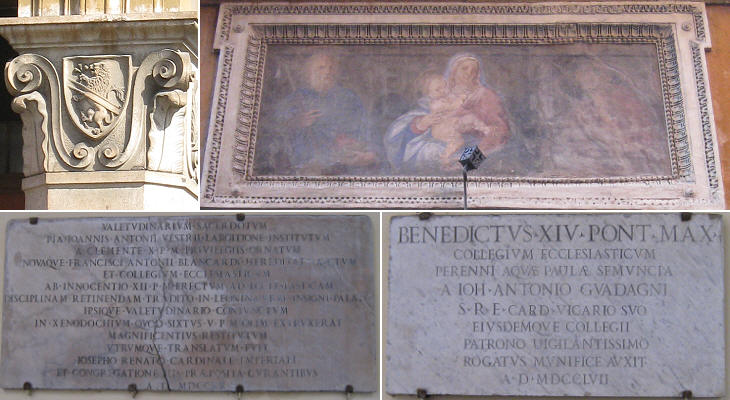 (left-above) Modern coat of arms of Pope Sixtus V on a column of the portico; (right-above) madonnella on the rear side of the building; (below) 1720 (left) and 1757 (right) inscriptions in the courtyard; they both refer to the building as Collegio Ecclesiastico

In 1841-1855 the building was turned into a military hospital run by the Knights of Malta, which because of its past use was known as Ospedale dei Cento Preti (One Hundred Priests), after the name of the religious congregation in charge of assisting the old priests. A part of the current building continues to house charitable institutions. 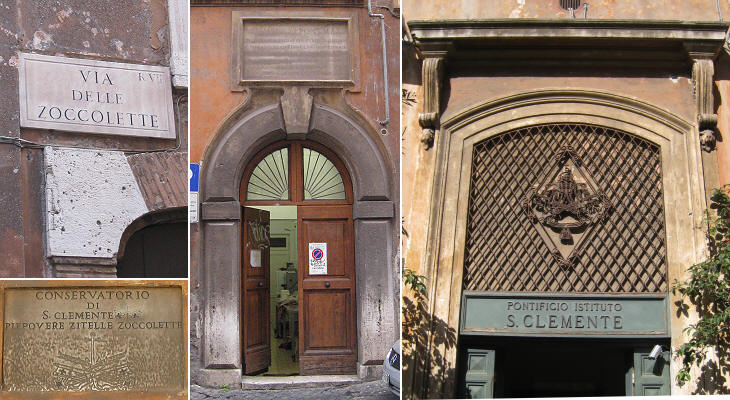 (left-above) Street plaque; (left-below) old inscription making reference to "zoccolette"; (centre) one of the entrances to the building with an inscription detailing the objective of the institution: to save "periclitantes puellas per Urbem collectas" (girls in danger found in the streets of Rome); (right) entrance to today's college for students

We saw the ceremony at the Minerva, where his Holiness was carried on a magnificent chair decorated with a figure of the Holy Ghost. (..) There was a procession of Roman girls who had received dowries from a public foundation, some to be married and others to become nuns. They marched in separate groups, the nuns coming last and wearing crowns. Only a few of them were pretty, and most of the pretty ones were nuns.
From James Boswell's letters on the Grand Tour related to his visit to Rome in 1765.
At the beginning of the XVIIIth century Pope Clement XI moved part of the beggars housed in the building to Ospizio di S. Michele and used the resulting empty space for a new institution aimed at helping young women "in danger". They were provided with clogs (It. zoccolo) so their hostel became known as Conservatorio delle Zoccolette.
The young women did not live in the building on a voluntary basis. They left it only to become nuns or to marry. It is worth mentioning that in today's Roman slang zoccola means a woman of little virtue, so perhaps the aim of the institution was not entirely achieved. 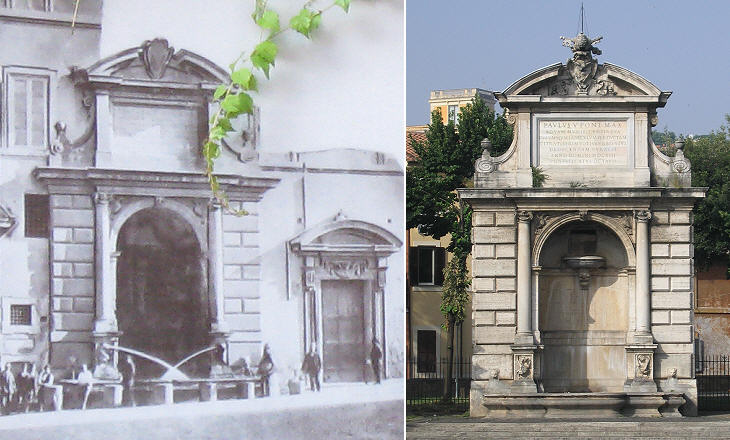 (left) A photo taken just before the removal of the fountain (to the right the entrance to S. Francesco ai Mendicanti); this photo and other images of the late XIXth century have been hung on the rear wall of Palazzo Farnese; (right) the reassembled fountain on the other side of the bridge

Close to the further entrance of the bridge, opposite the Via Giulia, is the Fountain of the Ponte Sisto, built by Paul V. from a design of Fontana. The water, which falls in one body from a niche in the wall of a palace, is discharged a second time from the mouths of two monsters (two dragons, heraldic symbols of the Pope) below.
Augustus J.C. Hare - Walks in Rome - 1875.
The fountain brought the water of Acqua Paola to Rione Regola. In 1879 it was dismantled and in 1898 it was reassembled on the other side of Ponte Sisto. The image used as background for this page shows a detail of the fountain (for similar strange faces see a page on the laughing masks of Rome). 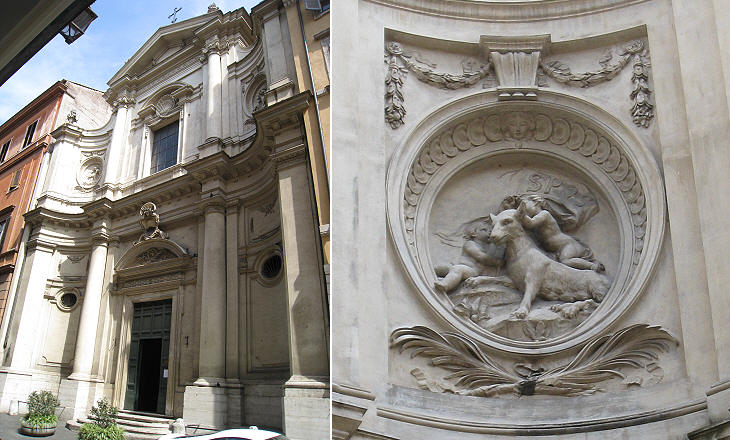 Via Giulia is a long street which houses many national churches (you may wish to see a directory of national churches in Rome). Siena was an independent Republic until 1557, when it was conquered by Cosimo I de' Medici who with this annexation became the Duke of Tuscany. The merchants and bankers from Siena who lived in Via Giulia during the XVIth century however continued to support a separate brotherhood from that of the Florentines which was situated at the other end of the street. In 1766-1775 they renovated their church which was dedicated to St. Catherine of Siena. The design of the new building by Paolo Posi, an architect from Siena, is an interesting example of late baroque style.
The inhabitants of Siena claimed that their town was founded by Aschio and Senio, two sons of Remus, the brother of Romulus, the mythical founder of Rome. Fearing that their uncle wanted to kill them, Aschio and Senio escaped into Tuscany where they founded Siena carrying with them a statue of the she-wolf, the symbol of Rome; this explains why a she-wolf with two children was portrayed in the decoration of the church with the inscription SPQS, which is almost identical to that of Rome. 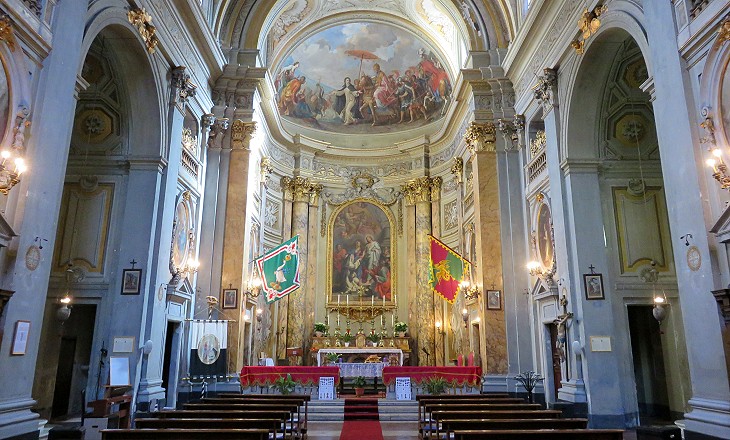 Chi dice Siena dice Palio (Who says Siena, says Palio). The apse of the church is decorated with the flags of the contrade (urban districts) which won the last two July Palio (a horse race). The contrade are seventeen, but only ten at a time take part in the race which is run twice a year on July 2 and August 16. The prize is a palio, a painted standard. Similar races were held in other medieval Italian towns, e.g. at Verona. 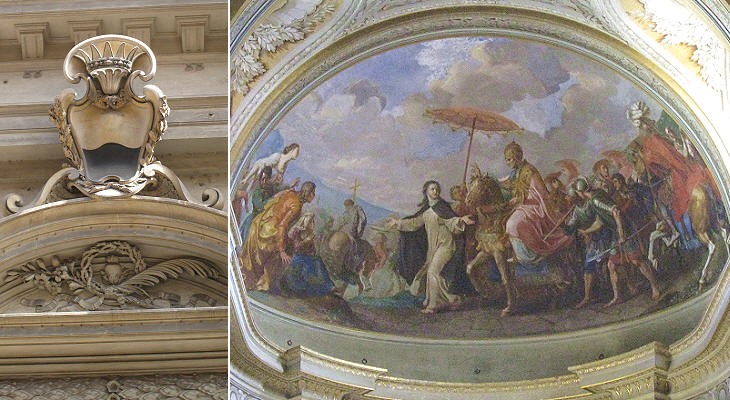 (left) Coat of arms of Siena; (right) 1773 painting by Laurent Pecheux, a French painter who spent most of his life in Italy, portraying St. Catherine greeting Pope Gregory XI at his return to Rome

Another possible saying could be Chi dice Siena dice S. Caterina, because the saint's popularity in Italy is second only to that of St. Francis of Assisi. The two were proclaimed patron saints of Italy in 1939. 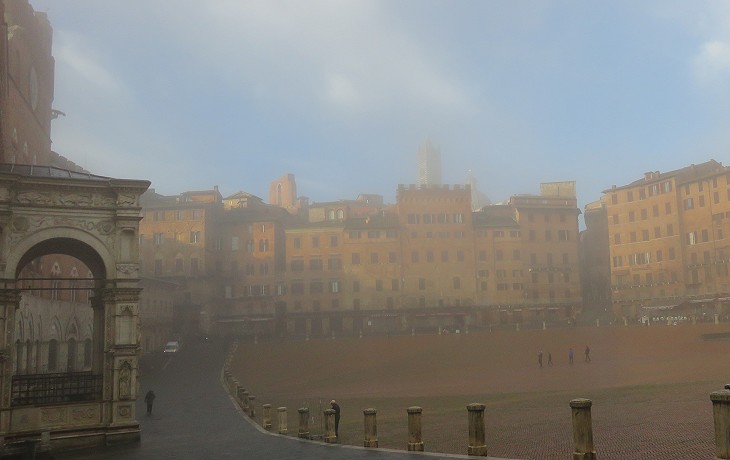