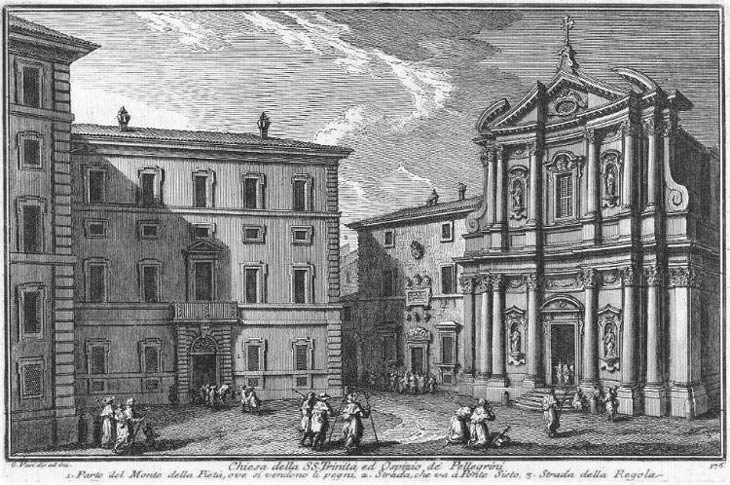 In this 1759 etching, Giuseppe Vasi showed a group of pilgrims on their way to Ospizio dei Pellegrini e dei Convalescenti, a charitable institution founded by St. Philip Neri to provide assistance to pilgrims during the Jubilee Years and the Holy Week; in ordinary periods the building housed convalescents. The etching was most likely based on scenes Vasi personally watched in 1750 during the Jubilee Year.
The view is taken from the green dot in the 1748 map below. In the description below the plate Vasi made reference to: 1) Rear side of Palazzo del Monte di Pietà; 2) Street leading to Ponte Sisto; 3) Street leading to S. Paolo alla Regola. The map shows also 4) SS. Trinità dei Pellegrini; 5) Palazzo Salomoni Alberteschi; 6) S. Salvatore in Onda. 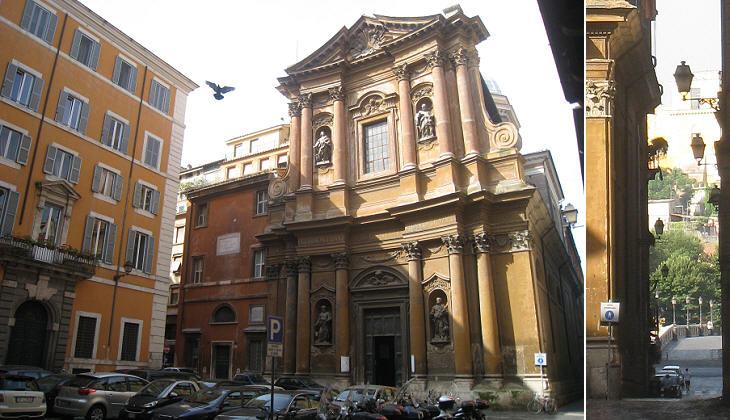 (left) The view in June 2010; (right) Via dei Pettinari (wool-carders), the street leading to Ponte Sisto

Apparently only minor changes have occurred after the time of the etching: the top of the church façade has been slightly modified, the adjoining building has lost its coats of arms and the rear side of Palazzo del Monte di Pietà has an additional storey, but the modern building in the background indicates that all the refectories and dormitories of Ospizio dei Pellegrini were demolished in 1940. 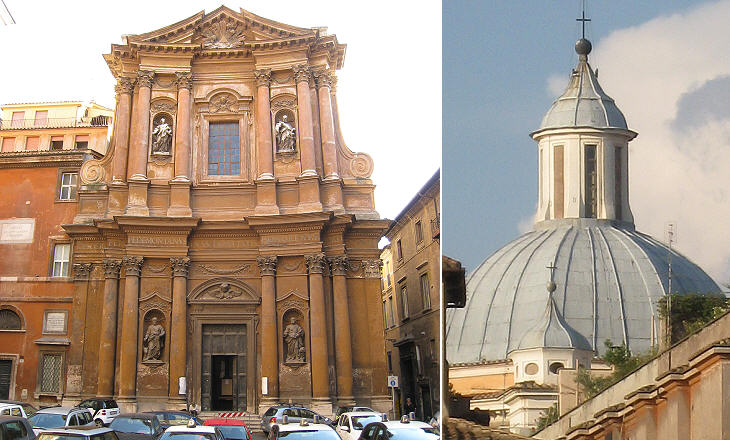 (left) Façade; (right) dome and one of the two small bell towers

SS. Trinità dei Pellegrini was built in 1614-1616, but the façade was designed by Francesco de Santis in 1723; it is slightly concave and reminiscent of that of S. Marcello; the tympanum had an oval window which was covered by a stucco relief having at its centre a triangle, a symbol of the Trinity (you can see it in the image used as background for this page). A small plaque to the left of the façade commemorates the death in the hospital of Goffredo Mameli and other military volunteers who fought with Giuseppe Garibaldi for the defence of Rome in 1849 (you may wish to see a page on commemorative plaques in the streets of Rome).
The church is one of the few historical buildings of Rome which still retains the reddish colour which characterized the city until a few years ago (see a page on the changes which have occurred in recent years). 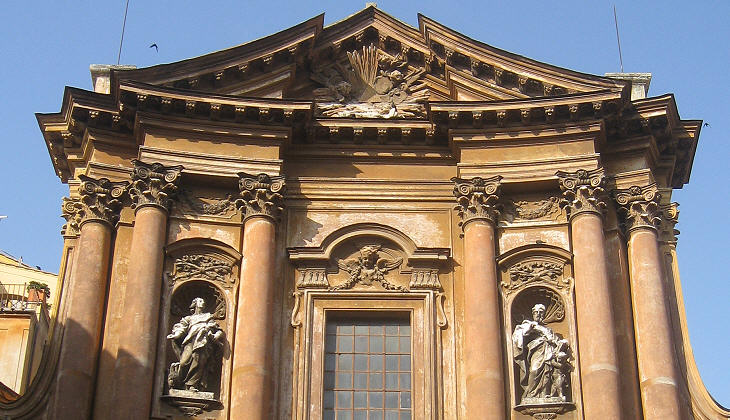 Detail of the façade: statues of St. John the Evangelist (left) and St. Matthew (right) by Bernardino Ludovisi

In the Hospital of the Pelegrini della S. Trinità, I had seen the feet of many pilgrims (see how dirty they were in a famous painting by Caravaggio) washed by Princes, Cardinals, and noble Romans, and served at table, as the ladies and noble women did to other poor creatures in another room. It was told us that no less than 444,000 men had been thus treated in the Jubilee of 1600, and 25,500 women, as appears by the register, which brings store of money.
John Evelyn's Diary and Correspondence 1644-1645
Ospizio dei Pellegrini had separate wards for male and female pilgrims; the dormitories had nearly 500 beds and the refectories could seat nearly a thousand guests; in addition to the church the establishment had an oratory in Via delle Zoccolette. Almost the whole complex was demolished in 1940. 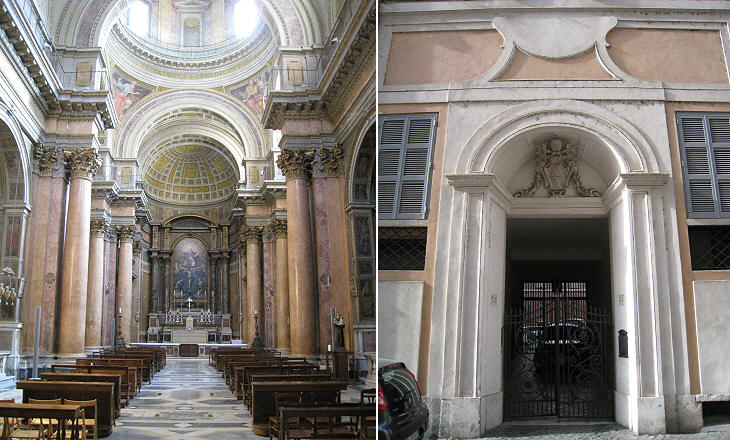 (left) Interior of the church; (right) side entrance to the hospice with the coat of arms of Pope Clement XII

At one point the management of the hospice felt the need to identify pilgrims from travellers in search of a free lodging; in 1843 Rev. Jeremiah Donovan wrote in his Guide to Rome: To be admitted as pilgrims they must come from a distance of at least sixty miles and bring with them the attestation of their bishop, certifying that they come to visit the holy places. All go to Confession and Communion during their stay, and hear a moral discourse morning and evening. 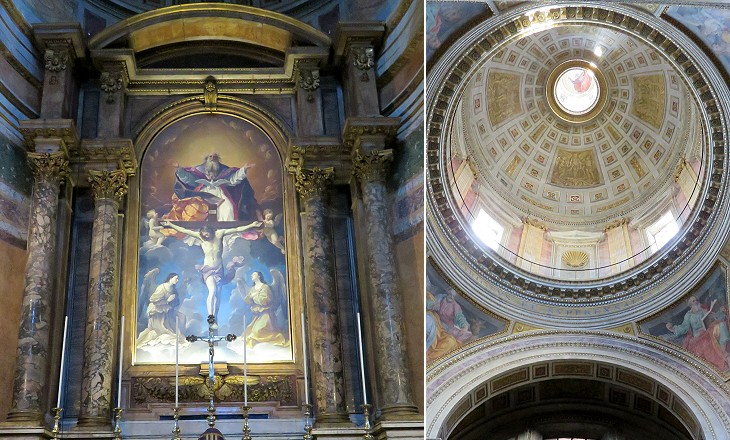 (left) Main altar with the Holy Trinity by Guido Reni (1625); (right) interior of dome which was largely redecorated in 1850 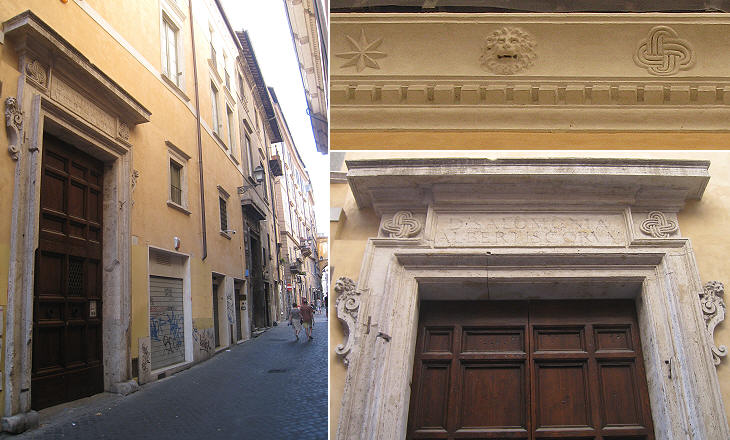 The Alberteschi were a powerful Roman family during the Middle Ages; their towers were located behind S. Benedetto in Piscinula in a neighbourhood known as Ripa Romea where many Jews lived. Salomone was a recurring name in the family and it eventually identified a branch of the Alberteschi; when they built (or acquired) a large palace in Via dei Pettinari they decorated it with Solomon's knots, a traditional Jewish symbol (you may wish to see a Solomon's knot in an ancient synagogue at Ostia). 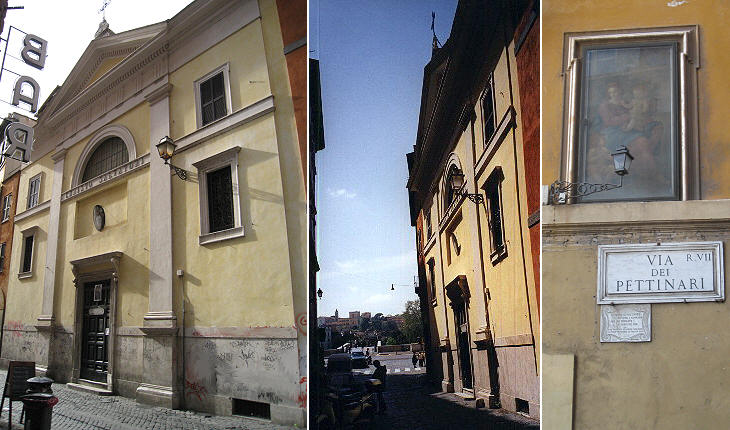 Onda is the Italian word for wave and it is generally thought that the appellation of this small church is due to the fact that it was frequently flooded; because of this the medieval church was modified several times and its floor was raised. The current building, including the façade, is the result of changes made in 1845 and in 1877. In 1844 the church was assigned to St. Vincenzo Pallotti and it still belongs to Societas Apostolatus Catholici, the congregation he founded which from 1854 to 1947 was officially known as Pious Society of the Missions.