Monastero di S. Silvestro in Capite
(Vasi at work in the Grand View of Rome)

Links to this page can be found in Book 8, Map B2, Day 1, View C6, Rione Colonna, Rione Trevi and Rione Campo Marzio. 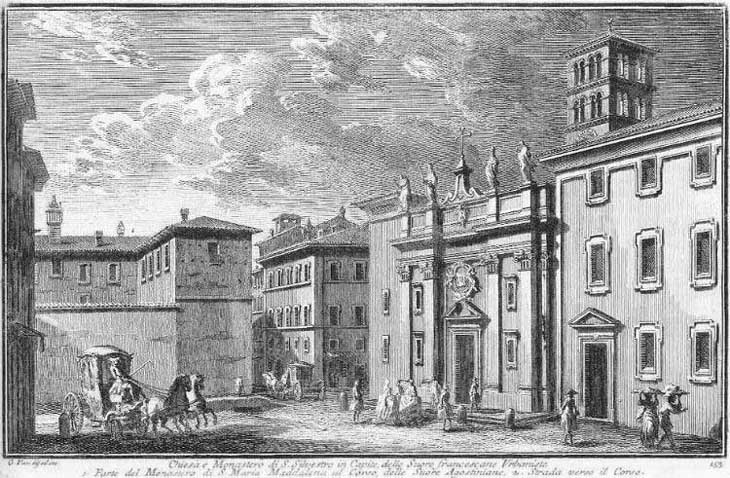 The reference in capite (Lat. caput, capitis head) is generally attributed to the head of St. John the Baptist which has been kept in the church since the XIIth century (but at Damascus they claim to house the same relic in the Umayyad Mosque); it is possible however that it came from the sentence in capita domorum (at the end of the houses), indicating that S. Silvestro was located at the end of the populated part of the city during the Middle Ages and until the early XVIIth century.
In 1758 when Vasi drew this etching the area was fully built. The façade of the church was redesigned in 1703 by Domenico De Rossi (the small coat of arms belongs to Clement XI, the reigning pope).
The view is taken from the green dot in the 1748 map below. In the description below the plate Vasi made reference to: 1) Nunnery of S. Maria Maddalena; 2) Street leading to Via del Corso. The small map shows also: 3) S. Silvestro in Capite; 4) SS. Andrea e Claudio dei Borgognoni; 5) Via Borgognona; 6) Casa dei Borgognoni. 1) is covered in another page. The dotted line in the small map delineates the borders among Rione Campo Marzio (upper half), Rione Colonna (in the middle) and Rione Trevi (lower end). 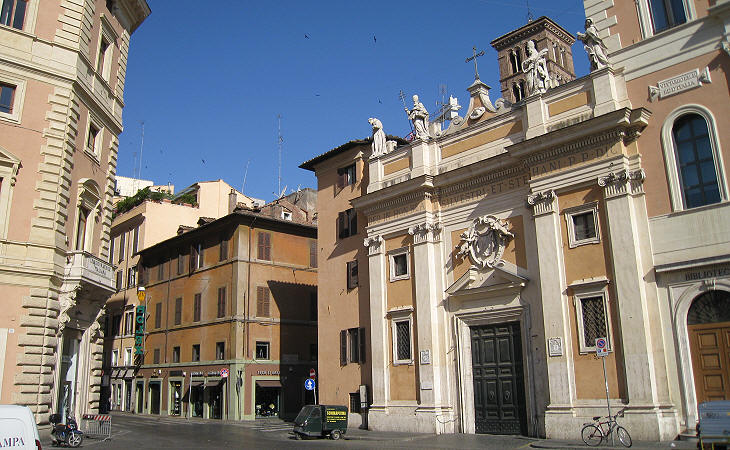 In 1871-1878 the nunnery adjoining the church was greatly modified and turned into the main post office for Rome. In the 1880s the nunnery of S. Maria Maddalena delle Convertite of which Vasi showed the rear side was replaced by Palazzo Marignoli, a large building in neo-Renaissance style. In 1940 the square was enlarged by demolishing the buildings between S. Silvestro in Capite and SS. Andrea e Claudio dei Borgognoni. 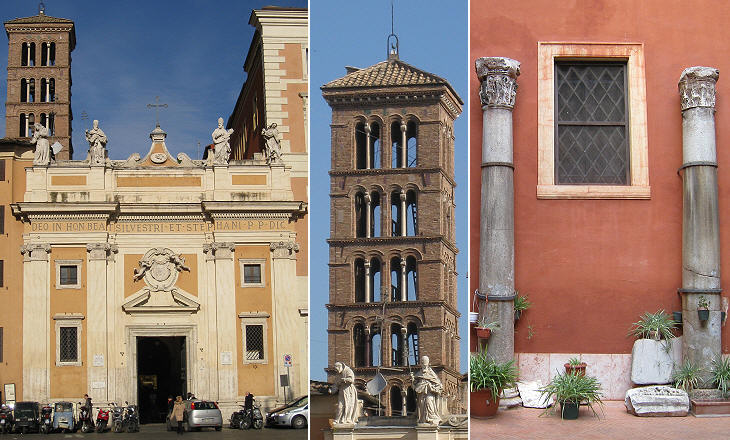 The church is dedicated to St. Sylvester I, who was pope at the time of Emperor Constantine and to St. Stephen III who was pope in 752-757 (you may wish to see a larger image of their statues). It was built by Pope Paul I, St. Stephen's brother, on premises of the Temple to the Sun erected in 273 by Emperor Aurelian who promoted that cult in an attempt to strengthen the unity of the Roman Empire. The atrium houses some ancient columns which were found by excavating beneath the level of the current church.
The immense building was raised by Aurelian on the edge of the perpendicular cliff of the Quirinal, facing the Campus Martius - for two purposes: first, to commemorate his conquest of the kingdom of Palmyra and the capture of Queen Zenobia; secondly, to provide the populace of Rome with an easy and unobstructed ascent from the plain of the Campus Martius to the top of the hill.
Rodolfo Lanciani - Rome in the light of recent discoveries - 1892 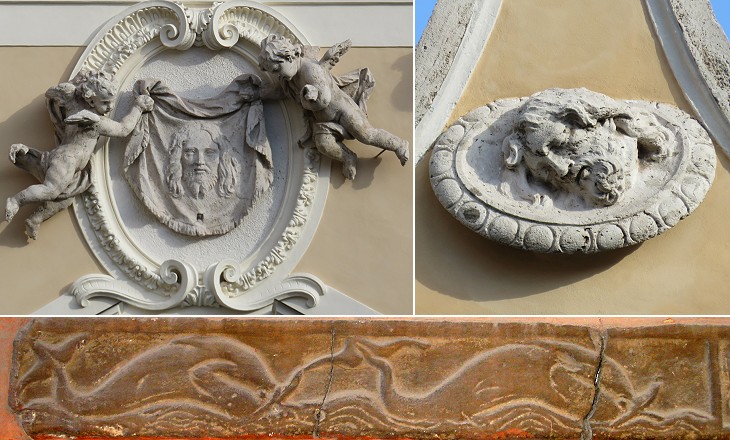 (above-left) Relief showing "Immagine Edessena"; (above-right) relief depicting the head of St. John the Baptist (also in the image used as background for this page; for other similar reliefs/paintings you may wish to visit S. Giovanni Decollato); (below) ancient relief in the atrium of the church

Behind the Church and Convent of the Penitent Whores, stands the Church of San Silvestro in capite, so called from the Picture of our Saviours Head and Face, which our Saviour himself made by miracle, and sent to the King of Edessa. (..) Now this Picture is kept here in this Monastery; and with great Probability, seeing it was here that divers Greeks Monks, driven our of their Country (..) for their defence of Sacred Images, were entertained by the Pope Paul the first; and its very likely that these good Men brought with them this famous Picture of our Saviour to save it from the fury of the Inconoclasts.
Richard Lassels' The Voyage of Italy, or a Compleat Journey through Italy in ca 1668
In addition to the head of St. John the Baptist, the church housed the Image of Edessa (aka Mandylion), a painted cloth portraying the face of Jesus Christ. It is an acheiropoieta (made without hands) image, i.e. it was not painted by a human being. In 1869 the relic (it opens in another window) was moved to the Vatican. 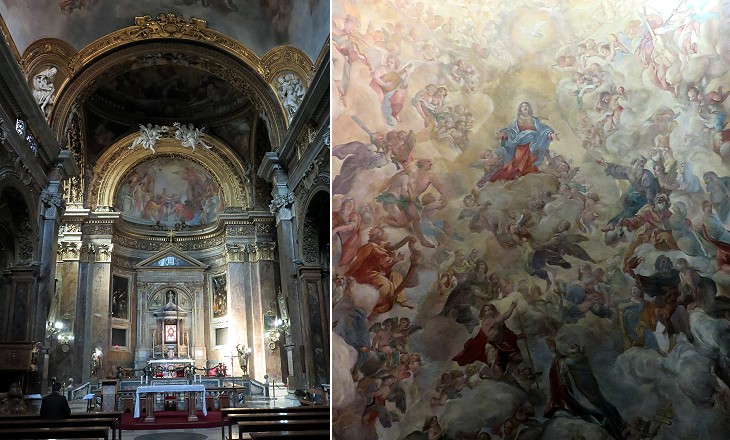 (left) Interior; (right) ceiling by Giacinto Brandi (1680-1684) (you may wish to see other paintings by Brandi at S. Carlo al Corso and some illusionistic ceilings which influenced his works)

The interior of the church was entirely renovated after 1593. 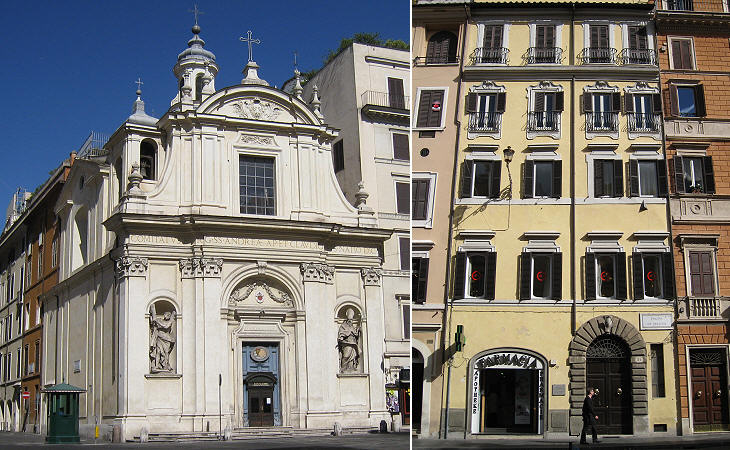 Bankers and merchants from Burgundy are recorded in Rome since the XVth century. During the Thirty Years' War (1618-1648) and especially between 1630 and 1642 many inhabitants of the Franche Comté (the part of Burgundy ruled by the King of Spain) sought refuge in Rome. In 1650 a group of them founded a national brotherhood, which grew in 1678 when another group of refugees came to Rome due to the annexation of the French Comté by France. They lived between Piazza di Spagna and Via del Corso and a street (Via Borgognona) and a house are still named after them. In 1728-1731 the brotherhood built a national church in a small square near S. Silvestro. The church was designed by Antoine Dérizet, a professor at Accademia di Francia who designed also SS. Nome di Maria. 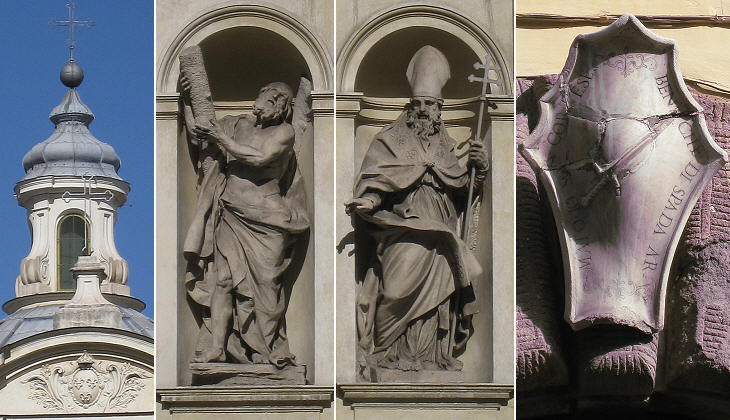 (left to right) Lantern of the church; statue of St. Andrew by Luc Bréton (very similar to that in S. Pietro by François Duquesnoy); statue of St. Claudius of Besançon by Guillaume Antoine Grandjacquet; coat of arms above the entrance to Casa dei Borgognoni: it shows a sword surrounded by the motto "Benchè (though) di spada (with a sword) armato (armed) io son (I am) cortese (courteous)"; it was designed by Jacques Courtois, but it was placed on the building by his brother Guillaume

In 1638 Jean Courtois, a painter of sacred images from Burgundy, came to Rome with his family; his sons Guillaume and Jacques also became painters, the latter specialized in depicting battles building upon his short military career. They Italianized their surname into Cortese and in 1672 Guillaume, who was known as il Borgognone went to live at Casa dei Borgognoni. You may wish to see the ceilings he painted at Valmontone and at Ariccia and another of his works at S. Giovanni in Laterano. 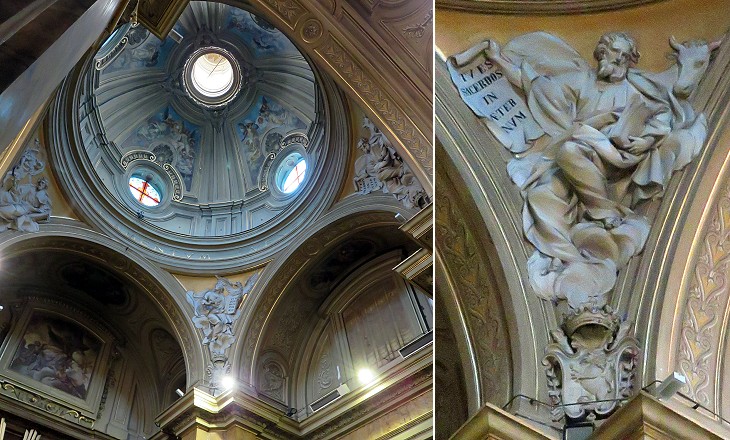