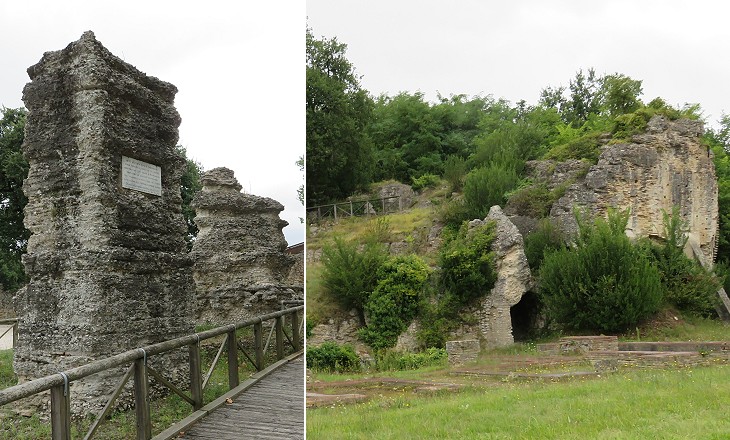 (left) Roman funerary monuments near the amphitheatre of Urbs Salvia with a plaque bearing a quotation from Dante (the amphitheatre is shown in the introductory page); (right) theatre

Se tu riguardi Luni (*) e Urbisaglia / come sono ite e come se ne vanno / Di retro ad esse Chiusi e Sinigaglia, / Udir come le schiatte si disfanno / Non ti parrà nova cosa né forte, / Poscia che le cittadi termine hanno.
"If Luni thou regard, and Urbisaglia, / How they have passed away, and how are passing / Chiusi and Sinigaglia after them, / To hear how races waste themselves away, / Will seem to thee no novel thing nor hard, / Seeing that even cities have an end."
Dante - Paradise - XVI, vv. 73-78 - Translation by Henry Wadsworth Longfellow
Urbs Salvia was founded in the IInd century BC and it acquired the status of colonia (a Roman outpost) in the late Ist century BC when Emperor Augustus resettled many veterans there. The inhabitants of the town were Roman citizens and they could access high political positions. Lucius Flavius Silva, the Roman commander who sieged Masada, was born at Urbs Salvia. He was admitted in the Roman Senate and held important offices including that of consul in 81 AD. He promoted the construction of an amphitheatre in his hometown.
(*) A town in Tuscany, near today's Carrara. The Romans called Lunense its white marble. Urbs Salvia was situated at the junction of two roads: one linking Firmum (Fermo) to Septempeda (San Severino) and the other Helvia Ricina (Recanati or Macerata) to Asculum (Ascoli). The town was built on the slope of a hill and it had a theatre of some size. In 410 Urbs Salvia was razed to the ground by the Visigoths of Alaric. Archaeologists have not found evidence of attempts to reconstruct the town. Its remains were visible at the time of Dante, who might have seen them in his wanderings during the years of his exile from Florence. Today they are protected by a small archaeological park. A passage of the funerary inscription says: PARENTIBVS PRAESIDIVM AMICEIS GAVDIVM POLLICITA PVERI VIRTVS INDIGNE OCCIDIT QVOIVS FATVM (*) ACERBVM POPVLVS INDIGNE TVLIT MAGNOQVE FLETV FVNVS PROSECVTVS EST.
"(He gave) support to his parents, joy to his friends, the virtues of this young man were unfairly terminated, his premature death was hard to accept to the people who in great number followed his funeral."
(*) Fatum is the power which determined the length of life and assigned the time of death. This term came to be used for death and especially the death of the young.
The inscription was found by Luigi Lanzi (1732-1810), one of the first Italian archaeologists, who praised it for its poetical eulogy of the young man. 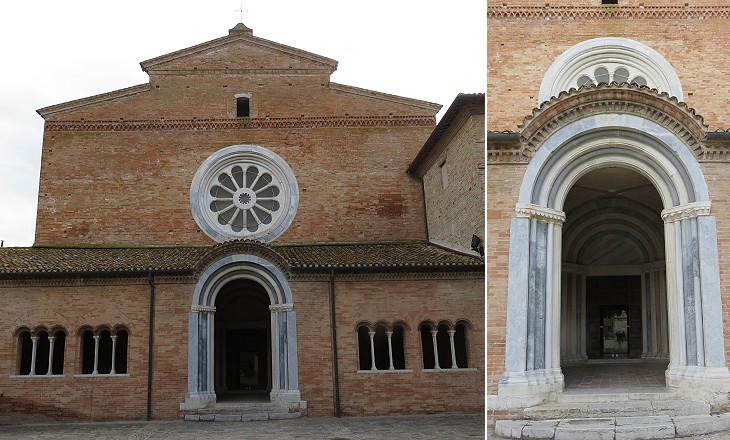 The Abbey of Fiastra was founded in 1142 and it was embellished with marbles, columns and capitals from Urbs Salvia. It is one of many abbeys founded in Italy at the initiative of St. Bernard of Clairvaux (It. Chiaravalle) (you may wish to see those at Fossanova and Casamari, south of Rome). The monks were Cistercians and their code of practice was based on a strict compliance with the Rule of St. Benedict. The Order was founded as a reaction to the many Benedictine abbots (e.g. those of Subiaco) who behaved as feudal lords did, lived in palaces and ate and drank without restrictions. 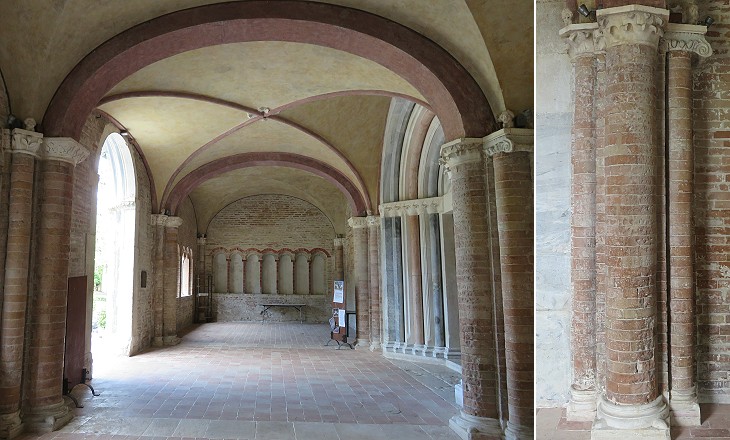 Abbazia di Chiaravalle di Fiastra: S. Maria Annunziata: (left) portico; one of the walled up small arches can be seen in the image used as background for this page; (right) clustered brick columns

The Cistercians introduced the first elements of Gothic architecture to Italy. At Fiastra they managed to match typical Gothic elements such as clustered columns with the availability of ancient capitals which had been designed for isolated columns.
Cistercian abbeys were founded in remote locations. Today it is difficult to apply this notion to the well farmed valley of the River Fiastra, a tributary of the River Chienti, but in the XIIth century the area was most likely marshy and unhealthy. 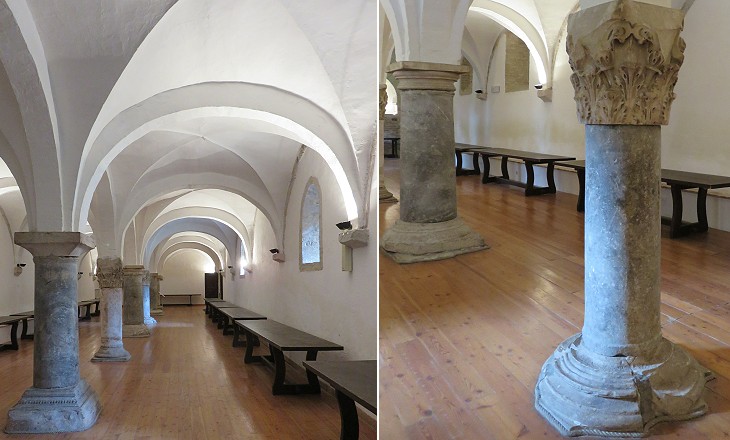 Exordium Magnum Ordinis Cistercensis (The Great Beginning of the Cistercian Order) is a book of instruction and history written by Konrad, Cistercian Abbot of Eberbach, a monastery on the River Rhine in Germany where he died in 1221. The book provides some interesting insights on the presence of lay brothers in Cistercian abbeys. Konrad wrote that men of all classes nobiles, mediocres, pauperes (poor people) applied as novices at Clairvaux, but the pauperes could only become lay brothers. He quotes as an exception an illiterate lay brother to whom knowledge of the Scripture and the ability to sing complicated chants were given. In another passage he tells that a lay brother had a vision of Jesus which helped him mind the monastery's cows and he adds it was a reward for lay brothers who are obedient and perform manual labour without complaint. Lay brothers had their meals in a separate hall, wore different clothes and did not take part in religious ceremonies. 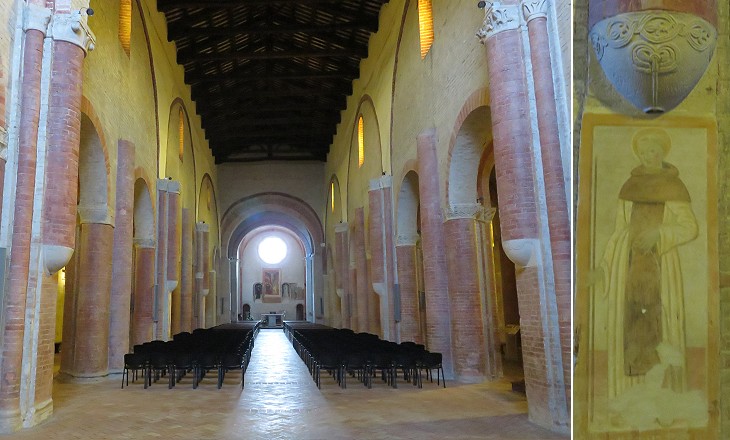 Abbazia di Chiaravalle di Fiastra: S. Maria Annunziata: (left) interior; (right) fresco portraying St. Amico of Rambona or of Avellana; both were Benedictine monks, but that in the fresco wears the Cistercian dress

In 1422 the troops of Braccio da Montone, a condottiere and at the time the ruler of Perugia, pillaged Fiastra and destroyed some of the works of art which decorated it. Soon after Pope Martin V assigned the Abbey and its many properties in commendam (in custody) to a cardinal as he had done at Farfa in 1421.
In the XVIth century the Cistercians were replaced by the Jesuits. In 1773 Pope Clement XIV suppressed that religious order and the Abbey was closed. Its properties were bought by the Bandini, a rich family of Camerino. The last heir donated all his possessions to a trust. In 1985 the Cistercians returned to the Abbey.
These events explain why the interior of the church is rather bare. As a matter of fact its present condition is in line with the teachings of St. Bernard of Clairvaux. 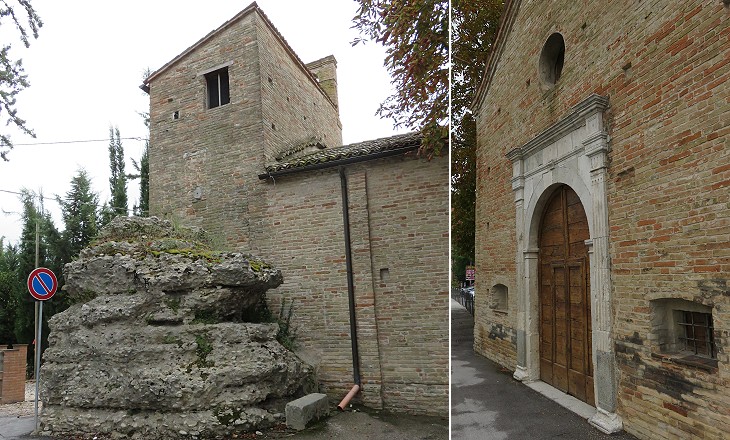 Urbisaglia: (left) Chiesa della Maestà built at the side of a Roman building and outside the medieval wall; (right) its Renaissance portal

Urbisaglia, a corruption of Urbs Salvia, is the name of a very small medieval town perched on the hill above the Roman one. In the XIIth century it was a possession of the Dukes of Spoleto who donated part of its surrounding territory to the Cistercians to build their Abbey. In 1296 it was acquired by Tolentino, a town on the northern side of the River Chienti valley, which had achieved self-independency. It remained under the jurisdiction of Tolentino until 1566 when Pope Pius V placed it under the direct government of the Papal State. 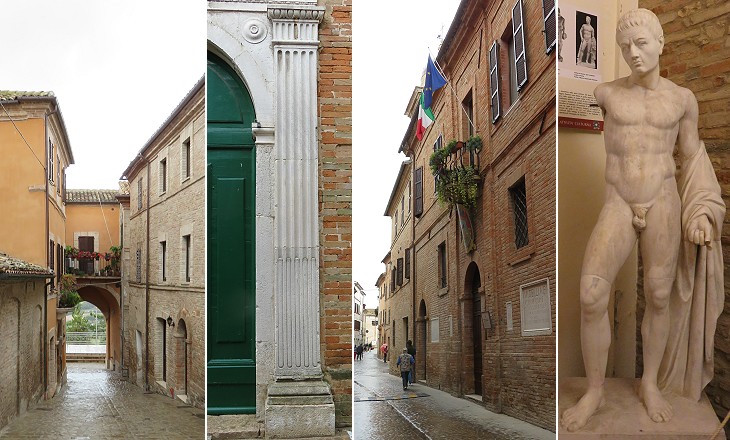 Urbisaglia (left to right): main street; detail of a Renaissance portal; Town Hall with some Roman inscriptions; ancient statue from Urbs Salvia (the head is a modern addition) inside the Town Hall

Urbisaglia is made up of a long street along the ridge of the hill. The street overall retains its historical aspect, but the gates and the walls of the town have been modified. 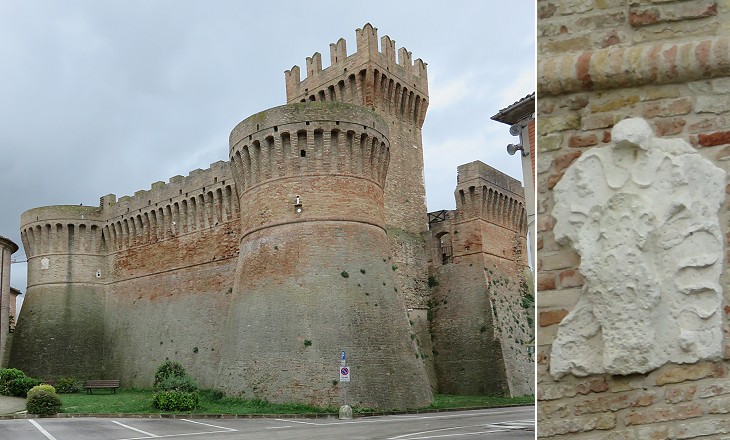 (left) Rocca di Urbisaglia; (right) an erased coat of arms either of Pope Paul III or of his son Ottavio Farnese, whom the Pope assigned territories in Umbria and the Marches as family fiefdoms

The military importance of Urbisaglia is testified to by the castle built at its southern end and having a commanding view over the River Fiastra valley. Its main purpose however was that to prevent a rebellion of the inhabitants of the town who resented being subject to Tolentino. A moat separated the castle from the town. The central square tower is dated XIVth century whereas the round towers were added in the early XVIth century to reflect the development of cannon warfare. You may wish to see some other fortresses of that period at Sassocorvaro and San Leo in the northern Marches.