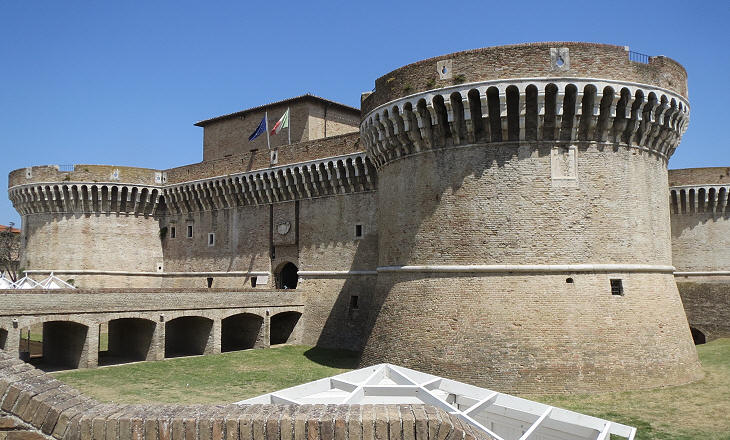 In 387 BC, the Senones a tribe of Gauls, sacked Rome before retreating to their territories along the Adriatic Sea. Sena Gallica was a Roman colony founded in 289 BC in the territory of the Senones. It was destroyed in 400 AD by the Visigoths led by Alaric. It was rebuilt by the Byzantines, but Dante in the early XIVth century quoted it in a list of towns bound to disappear (Par. XVI) because most of its inhabitants had been massacred in 1280 by Guido da Montefeltro from Urbino.
Dante's prophecy did not materialize and Sinigaglia, as the town was known until the early XXth century, became a fiefdom of the Malatesta. Sigismondo Pandolfo Malatesta, who ruled over Rimini and Fano is regarded as the second founder of Senigallia because he built new walls and promoted the economy by inviting merchants to establish themselves there. In 1462 he was defeated outside the town by an army led by Federico da Montefeltro who acted on behalf of Pope Pius II. Senigallia became a direct possession of the Popes and a few years later Pope Sixtus IV assigned it to Giovanni della Rovere, Duke of Urbino, his nephew. 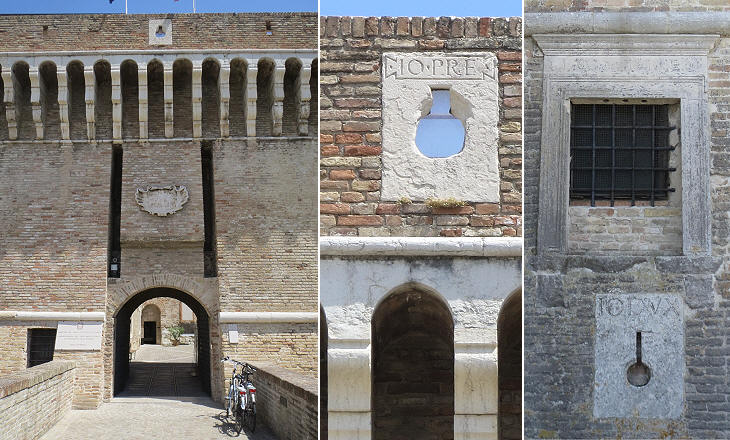 Rocca Roveresca: (left) entrance with cartouche bearing an erased inscription; (centre/right) gun slits with inscriptions IO (Giovanni della Rovere) PRE(fectus) and DUX. "Praefectus Urbis" was the magistrate in charge of Ancient Rome when the emperors resided elsewhere. The title was revived by the Popes to indicate a governor of the city. Giovanni della Rovere was appointed Prefetto in 1475 and Commander (Dux) of the Papal Army in 1484

The fortress is a remarkable example of military architecture designed by Baccio Pontelli in 1480. In the following years Pontelli built the fortress of Ostia for Cardinal Giuliano della Rovere, Giovanni's brother.
During the French occupation of the Papal State in the late XVIIIth century coats of arms and inscriptions making reference to the popes were erased, but the letters Giovanni della Rovere placed on the cannon slits of the fortress were spared. 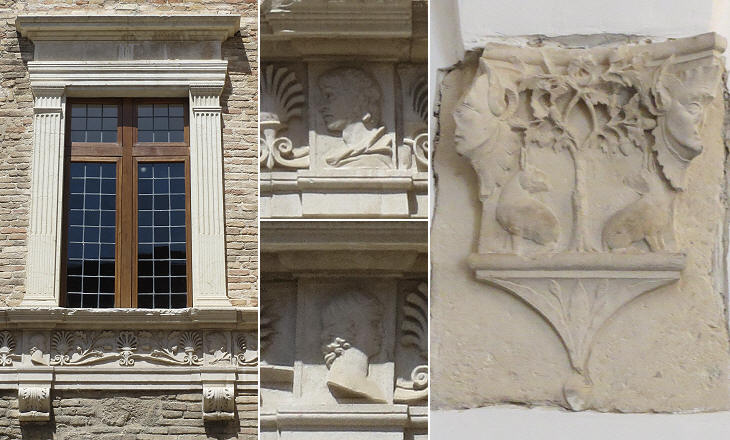 Giovanni della Rovere married Giovanna da Montefeltro, daughter of Duke Federico. Their son Francesco Maria became Duke of Urbino in 1508, when Guidobaldo da Montefeltro, his uncle, died without heirs.
Senigallia was included into the Duchy and it became its main port. The apartments the della Rovere built inside the fortress recall Palazzo Ducale di Urbino. The image used as background for this page shows Senigallia in a XVIth century map drawn by Piri Reis, an Ottoman cartographer. Although the representation of the town is imaginary it is indicative of its importance. 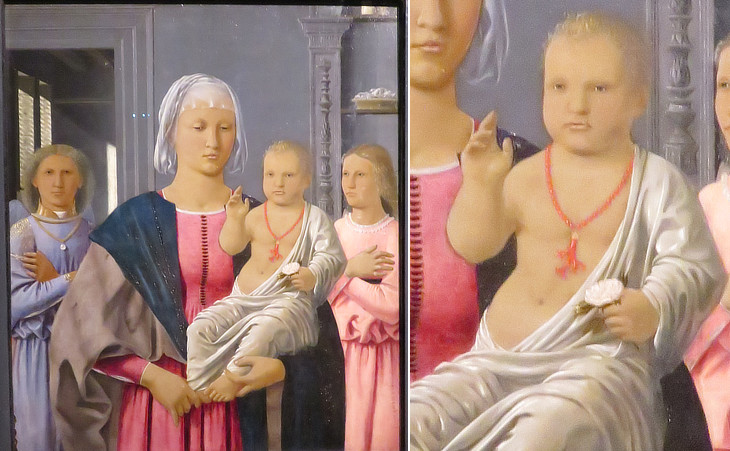 Branches of coral, hung at the neck of infants, are thought to act as a preservative against danger.
Pliny the Elder - Natural History - Book XXXII:11 - Transl. by John Bostock and H.T. Riley
Piero loved impersonality, the absence of expressed emotion, as a quality in things.
Bernard Berenson - The Central Italian Painters of the Renaissance - 1897
From its small scale the painting was intended for private devotion. It was noticed for the first time in 1822 in the church of S. Maria delle Grazie just outside Senigallia, whence the current name. The commission was likely from or on behalf of Giovanni Della Rovere, betrothed in 1474 to Giovanna da Montefeltro, at which time Federico made Giovanni, lord of Senigallia. 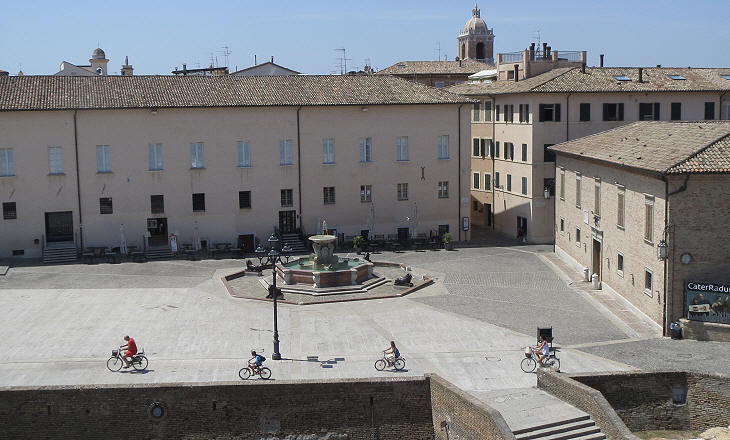 Senigallia, similar to all the towns of some importance of the Duchy of Urbino, had a palace where the Dukes resided during their visits. The current building at Senigallia is a ghost of its former appearance. A strong earthquake in 1930 led to the demolition of its second floor, but prior to that it had already been turned into an unassuming building (although some halls inside retain the original decoration). 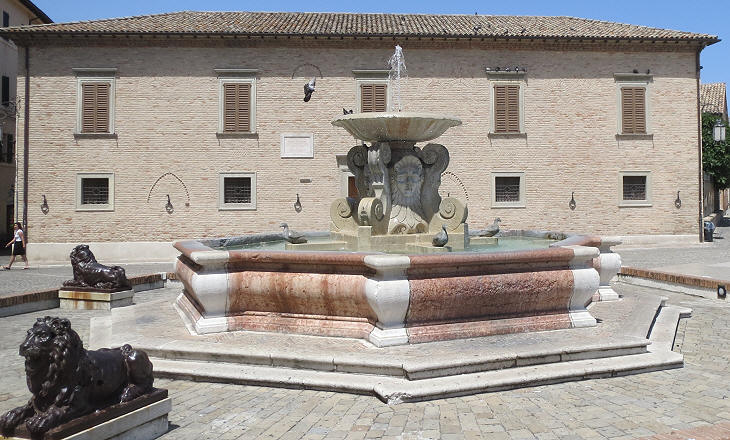 At the end of the XVIth century Duke Francesco Maria II della Rovere built a fountain between the palace and the fortress. The choice of the stones of the basin recalls the fountain built in the following century opposite Palazzo Ducale in Pesaro. The lions are a modern addition.
Giovanni Giacomo Baviera was an uncle of Giovanni della Rovere on his mother's side and he was initially appointed governor of Senigallia. He established himself in town and Baccio Pontelli built for him a small palace, which retains some of its original design, notwithstanding the loss of the second floor. 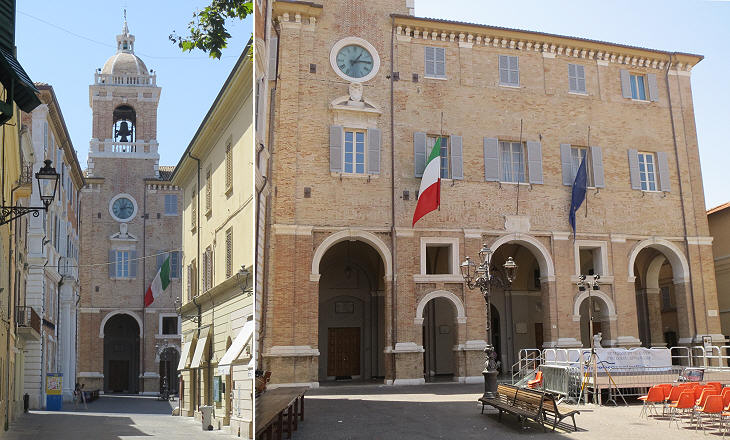 At the beginning of the XVIIth century the della Rovere built their last addition to the monuments of Senigallia because in 1631 the Duchy of Urbino returned to be a direct possession of the Papal State. Palazzo Municipale is an elegant building attributed to Muzio Oddi, who is best known for his studies in the use of solar clocks. He developed his theories and calculations during the eight years he spent in prison on the charge of having plotted against the Duke. 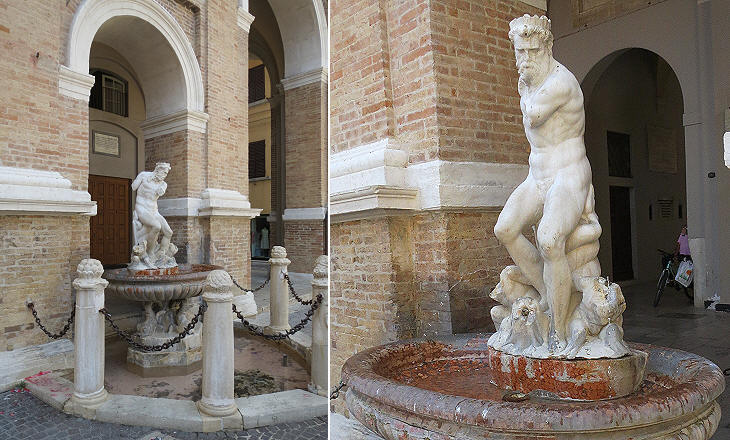 Palazzo Municipale was embellished with a statue of Neptune which is believed to have been an ancient statue reworked in the style of Giambologna, a great sculptor of the XVIth century (you may wish to see one of his masterpieces). However the inhabitants of Senigallia have given the statue an unflattering nickname: Il Monco in Piazza (monco, person without one or both arms). 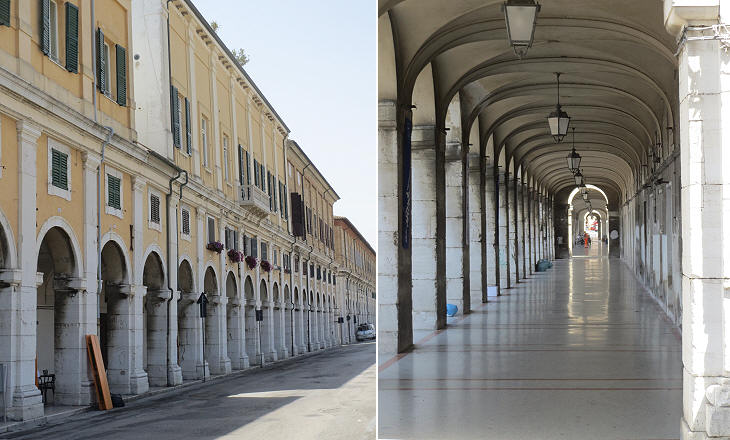 In the XVth century Sigismondo Pandolfo Malatesta gave new impulse to a local trade fair (Fiera della Maddalena), the development of which was favoured by the della Rovere and after them by the Papal Government. Fiera di Sinigaglia was held in July/August and it attracted merchants from the Levant and Northern Europe. During the fair, foreigners were entertained with fireworks and other shows. Eventually the town needed to be enlarged and better facilities provided for the merchants. A new monumental gate dedicated to Pope Benedict XIV was built at the entrance of the new neighbourhood (you can see it in another page of this website) and six long buildings with shops and warehouses provided the merchants with the facilities they needed. The porticoes were named after Monsignor Giuseppe Ercolani who was in charge of their construction and of the enlargement of the town.
In the XIXth century the fair lost importance. Its name is still given to local fairs such as the flea market which is held every Saturday in Milan. Pope Pius IX was born in Senigallia in 1792 and became pope in 1846. He did a lot to renovate the churches of his hometown. Unfortunately the architects to whom he commissioned these improvements were not particularly talented, so the end result is that Senigallia lost some interesting churches of the previous centuries.