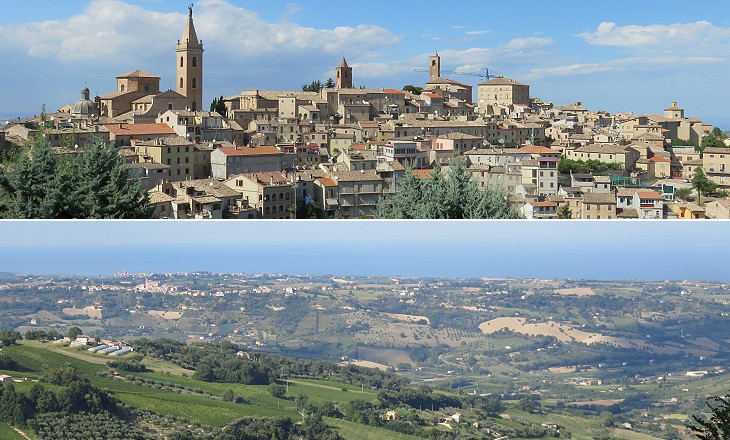 Views from Monte Antico: the central section of Ripatransone (above) and the Adriatic Sea coast (below) 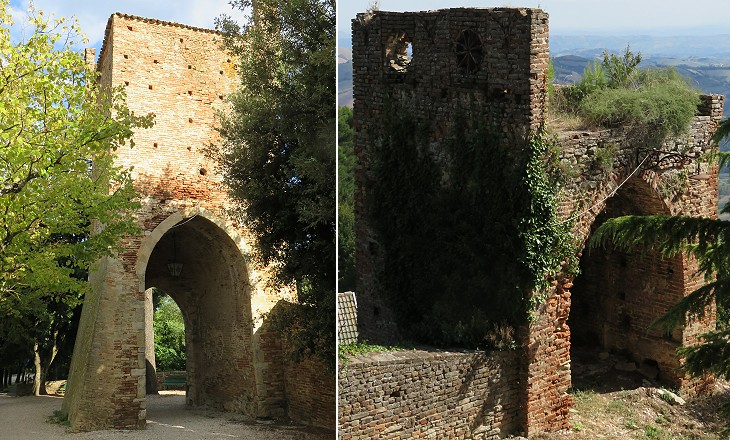 (left) Porta Monte Antico; (right) a tower on the highest point of the town

The name of Ripatransone is first recorded in the IXth century as a fiefdom of the Dransone or Transone family. Ripa stood for rock/steep cliff, rather than for beach as it did in Rome.
It was made up of four adjoining castles. In the XIIth century they were linked by walls, which to a great extent still indicate the limits of the town. Monte Antico, one of them, is situated on a commanding position over the rest of the town. The walls, as shown in the icon of this section, had Ghibelline swallow-tailed merlons, but the town often switched sides between the supporters of the Popes (Guelphs) and those of the German Emperors (Ghibellines). 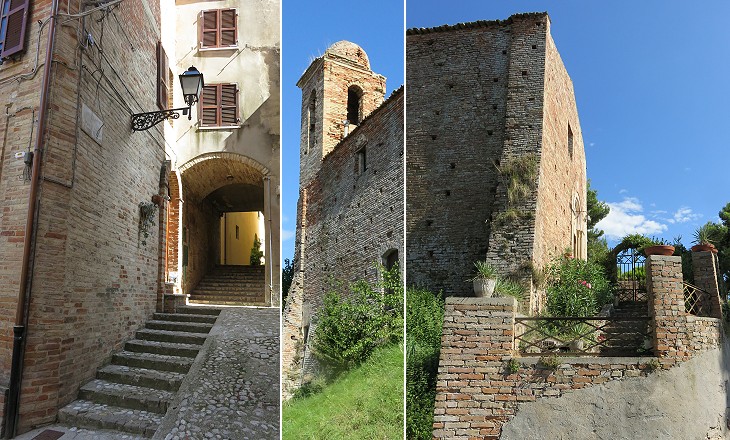 The urban layout of Ripatransone still shows evidence of the four castles from which it originated. S. Nicolò was built in the IXth century on the highest point of the town (508 m/1,660 ft). It was dedicated to Sts. Denis, Rusticus and Eleutherius, IIIrd century French martyrs. In the XVth century Christian refugees from Albania settled at Monte Antico and a chapel of the church was dedicated to St. Nicholas, Bishop of Myra, whom they highly venerated and eventually this dedication prevailed. The bell tower was built at that time. S. Nicolò was a parish church until 1881. It is now a private property. 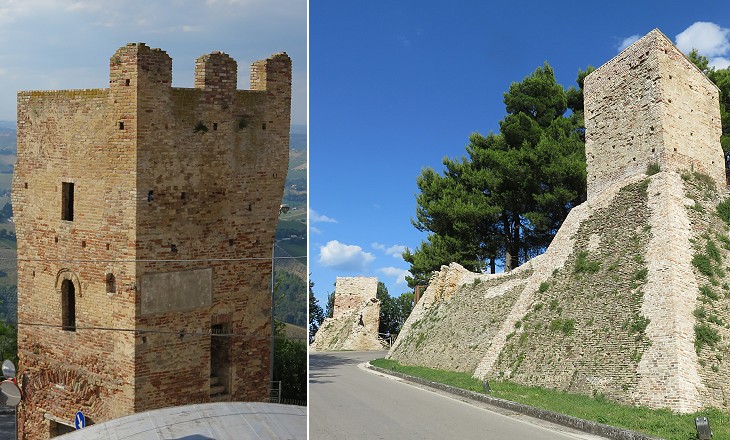 The history of Ripatransone from the XIIIth to the XVth century was marked by the rivalry between its inhabitants and those of Fermo. Powerful families of the region, i.e. the Malatesta of Rimini and the Sforza of Pesaro, built upon this rivalry to seize Ripatransone with the help of troops from Fermo.
The walls were strengthened in the XVth century, but this did not prevent the sack of the town by disbanded Spanish mercenaries in 1515. Some additional improvements were made in the late XVIth century, but they did not impact on the overall aspect of the walls. 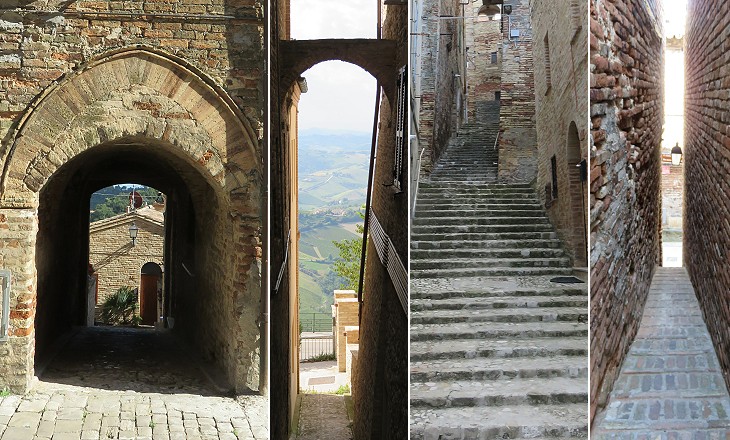 Passages and narrow alleys, that to the far right is dubbed as the "narrowest street of Italy" because of its width: 38 cm/14.6 in

Ripatransone stands on five hills (the four castles plus Colle Belvedere) which are linked by steep and narrow streets and steps. Its current population amounts to ca 4,000 inhabitants, half of that in 1951, so there are not many people around in the parts of the town which are less accessible by cars. These areas however are properly maintained and house some wine shops for the holidaymakers who give up a day at the beach for a cultural and gastronomic excursion.

Similar to many other Italian towns Ripatransone achieved some sort of self-government between the XIth and the XVth century. This was based on a Consiglio where all the main families were represented and on a smaller body of Priori or Consoli in charge of the running administration of the town.
Because of rivalries and suspicions among the local families the government of the town was often assigned to a Podestà, a foreigner, on a temporary basis. Palazzo del Podestà has retained most of its fortress-like appearance, while the Town Hall where the Consiglio used to meet was modified in the XVIIIth century. 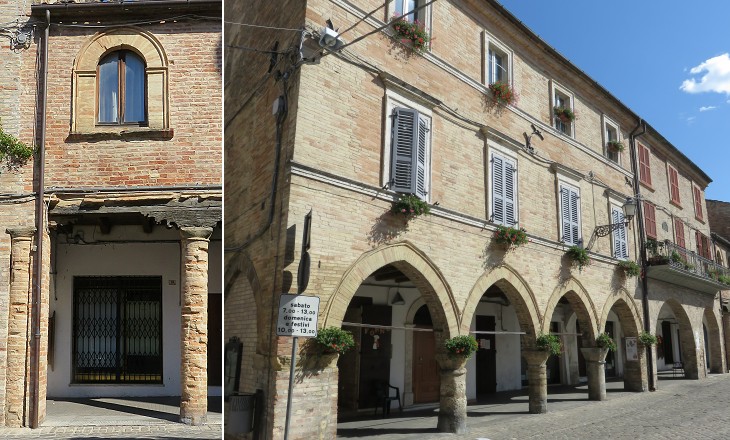 XIVth century porticoes in one of the main squares

The climate of the Marches is characterized by bora, a cold wind coming from the north-east which sweeps through the region without finding natural obstacles. This explains why its towns have streets with long porticoes. These are less likely to be found in Tuscany and Latium which are sheltered from this wind by the Apennines (and in general have a milder climate). 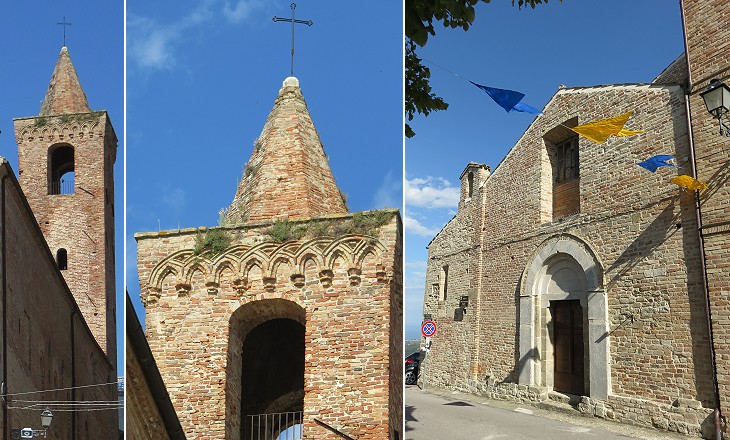 Notwithstanding the recurring fights with Fermo the XVth century was a favourable period for the development of Ripatransone where new churches were built. Their design however was still linked to medieval patterns. S. Maria dell'Agello was founded in the XIth century as the church of one of the four castles (it actually stands on a commanding position), but its portal is dated XVth century when the building underwent some changes. 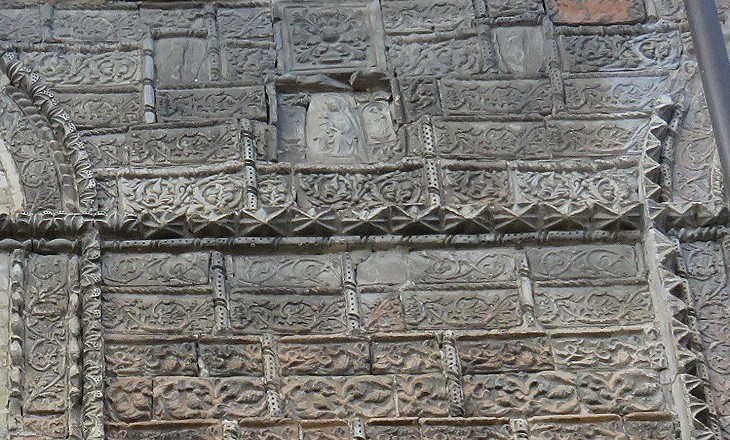 This house has a highly unusual facing with terracotta tiles. They in part imitate a brickwork decoration by highlighting the design of the windows, but most of the tiles have patterns based on acanthus scrolls, which are typical of Renaissance architecture. The tiles were made locally as Ripatransone was renowned for its pottery workshops. 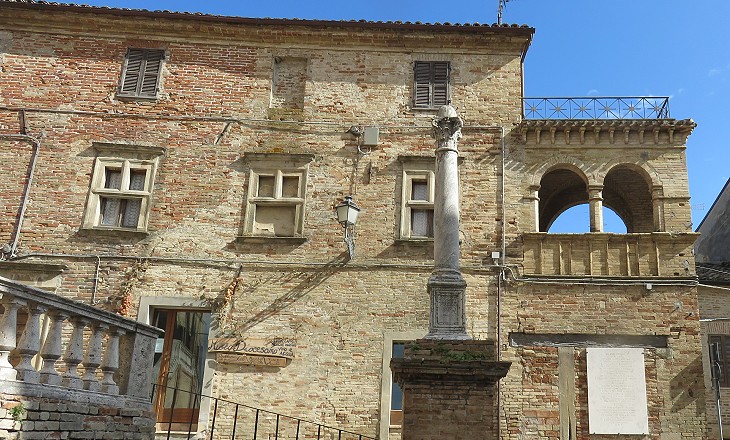 Ascanio Condivi belonged to a wealthy family of Ripatransone. He was fond of painting and in 1545 he became an assistant to Michelangelo. As a painter he did not achieve much, but based on his acquaintance with Michelangelo he was in a position to write a biography of his master in 1553. His book corrected some inaccuracies in the biography written by Giorgio Vasari, however its claim that Michelangelo was of noble descent have proved unfounded.
Ascanio Condivi then returned to Ripatransone where he married, held some public offices and embellished the family house by adding a small loggia. His heirs continued to have an important role in the life of the town until the 1940s. (left/centre) Cathedral; (right) XVIIth century painting attributed to Orazio Gentileschi in a chapel of the Cathedral

In 1571 Pope Pius V gave Ripatransone the status of Città (town) and made it a bishopric see. He maybe made this decision following the advice of Cardinal Felice Peretti (who became Pope Sixtus V in 1585). Cardinal Peretti was born near Ripatransone and he endeavoured to help his homeland.
Lucio Sassi, the first Bishop, resigned after three years, perhaps because he did not like living in such a small town and he returned to Rome (he was made cardinal in 1593). Ripatransone did not have a church with the size/decoration suited to a cathedral. This was built in 1597-1623, but it was subsequently modified many times. The current bell tower was completed in 1902. 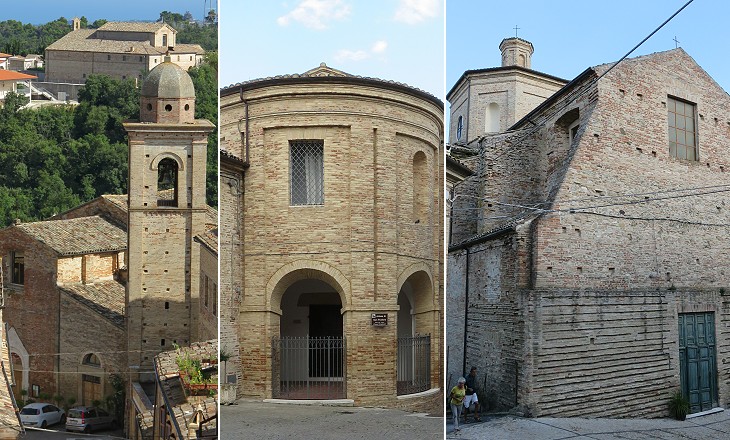 The territory of the Ripatransone diocese was reduced in 1586 when a new bishopric see was established at Montalto, only ten miles away. This meant that the Bishops of Ripatransone could not rely on much money to spend in the construction of new churches. S. Filippo is the largest church built in the period following the establishment of the bishopric see, apart from the Cathedral. Other churches dedicated to St. Philip Neri were built at Camerino, Macerata, Matelica and Treia.
The image used as background for this page shows a detail of the ironwork balcony of Palazzo Capocasa (XVIIIth century).