Todi - page one: The Town
(inscription at Fonte Cesia)

The diligence plodded on slowly to Todi, over a hilly road, but through a country so beautiful that no one could have wished to be whirled rapidly through it. The air was elastic and bracing, and the sky covered with massive clouds of snowy white, which the light winds hardly stirred. Todi, high in the air, shone like an aerial city, and was visible for some hours before we reached it.
George Stillman Hillard - Six Months in Italy in 1847-1848
Of all the towns of Umbria none has left a more charming impression on my mind than Todi. (..) Remote from the great thoroughfares, Todi seems to lie wrapped in slumber; in a silence which is by no means that of death, but of retrospection - in the memory of her past glories.?
Ferdinand Gregorovius - An excursion through Sabina and Umbria in 1861 - Transl. by Dorothea Roberts 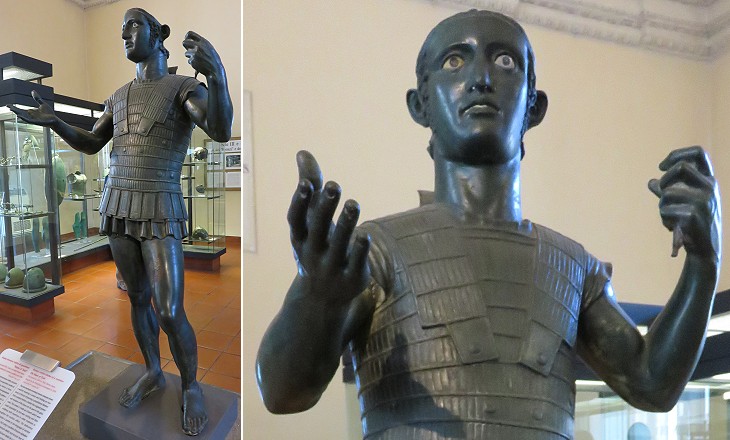 Mars of Todi, a Vth century BC Etruscan bronze statue found at Todi and now at Museo Gregoriano Etrusco (Musei Vaticani) in Rome

Todi is located at the top of a hill, therefore it has a commanding position over the Tiber Valley; Tutere, its ancient Etruscan name, is thought to mean "border" probably because the town marked the eastern limit of the Etruscan territories. Via Flaminia, the ancient road which linked Rome with Ariminum (today's Rimini) on the Adriatic Sea, crossed Umbria through two different routes; from Narni western Via Flaminia reached Carsulae (near today's San Gemini) and Todi and from there it moved towards Bevagna; eastern Via Flaminia reached Bevagna (from Narni) via Terni and Spoleto.
While over time many towns developed along eastern Via Flaminia, Todi is the only one on the western path.

It is encircled by ancient walls, a portion of them Etruscan. Gregorovius
The Romans had a clear idea of a town's most appropriate layout; when the natural features of an area did not fit into this layout the Romans were ready to modify them in order to obtain the portion of flat land needed for the town's forum (a public square surrounded by porticoes and buildings). For this reason at many locations of Todi one can see parts of Roman walls which supported terraces. The most impressive ones are a series of niches which for many centuries were thought to belong to a temple to Mars, while their purpose was to support the town's upper section.

(left) 1244 walls (including a modified tower) near S. Maria della Consolazione; (right) ruins of la Rocca, the fortress built in 1373

The history of Todi is similar to that of Perugia: Etruscan origin, with a long period of prosperity during the Roman Empire followed by centuries of decadence and misery. After the year 1000 Todi had a period of recovery which led to repopulation of the town within the ancient Etruscan/Roman walls and later on to expansion of it beyond them (new walls were built in 1244). The weakness of papal power allowed Todi to develop various forms of self-government. This period came to an end when Cardinal Gil de Albornoz restored papal rule over the whole of Umbria. In 1373, at the top of the hill, a fortress was built for a permanent garrison with the objective of ensuring the loyalty of Todi to the Popes.

Todi has many gates: Porta Catena is decorated with an eagle, the symbol of Todi: it is part of the walls built by the Romans when they enlarged the Etruscan town, but it was largely modified in medieval times. Porta Perugina and Porta Romana belong to the 1244 walls, but the latter was given a Renaissance appearance by Pope Gregory XIII.

The public buildings are in the square, monuments, all of them, of the days when Todi was a free Umbrian Republic, waging war with some of her neighbouring towns - such as Terni and Spoleto - concluding treaties with others. In the thirteenth century, her flourishing period, Todi could send 1000 horsemen, fully armed and accoutred, into the field. In her six quarters she could boast of having 30,000 inhabitants, while now she can number but 4000.? Her constitution was Guelphic, and thoroughly popular; the guilds of the artisans were her sole rulers, through their committee in Parliament. A Podesta, and a Captain chosen by the people, were at the head of this free State, and administered justice. (..) The venerable records of this republican town are now kept in the Communal Palace and the palace of the Governor, both in the principal square. The first is a large Romano-Gothic structure, of very noble proportions, with a wide flight of stone steps leading up to it. Gregorovius
Italian Comuni (city-states) varied widely as political institutions. Todi retains three palaces built during its period as a city-state which help in the understanding of the various forms of government it had.
Palazzo del Popolo is the oldest one (it was completed in 1228): it has a large hall for the meetings of Consiglio Generale, a body where all the wealthiest families and the guilds were represented (in the XVth century it had 478 members). Palazzo del Popolo served also as residence for the podestà, a magistrate who exercised supreme power in the city, usually for a short period of time. In order to avoid the intense strife so common in Italian civic life, very often the podestà was a foreigner.
Palazzo del Capitano (del Popolo) was built in 1293 as residence of a magistrate (capitano=captain), whose role was to represent the lower classes of the city and/or those citizens who did not belong to the original group of families who set up the political institutions of the Comune.
Some details, such as the Ghibelline merlons at the top of Palazzo del Popolo, are the result of a restoration carried out at the beginning of the XXth century. 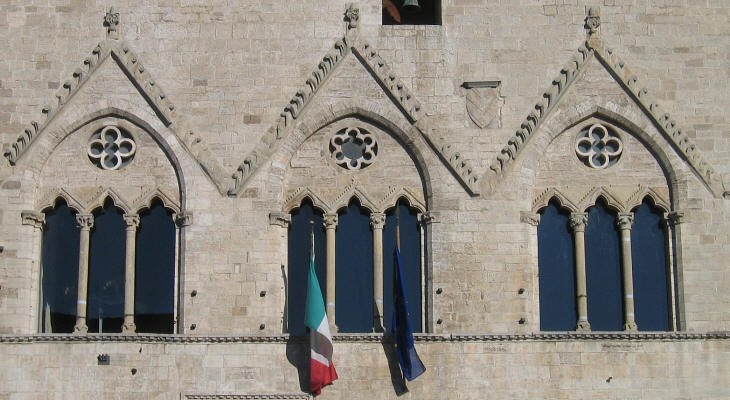 Windows of the main hall in Palazzo del Capitano

These two palaces show similarities in the design of the windows and in the external staircase with Palazzo dei Priori in Perugia.

Priori (the first citizens) were usually the leaders of the most important guilds; in the Comuni complex system of check and balances the Priori gave voice to the needs of the economy. Their palace in Todi was built in 1334-1347 around an existing tower. The façade was modified in 1513 by Cardinal Antonio Del Monte, uncle of Pope Julius III. The merlons are of the Guelph type.

After the end of the Great Schism the popes were able to restore their authority over Umbria and Todi became a quiet provincial town.

Todi knew a period of growth when Angelo Cesi became the bishop of the town (1566-1606); the Cesi were Dukes of Acquasparta and a very rich family. Angelo Cesi embellished Todi with an elegant fountain, a renovated Bishop's palace and a family palace. In Rome he promoted the construction of S. Maria in Vallicella.

There are no great feudal families now left in the town. (..) Many stately old palaces remain to remind one of these proud nobles. They are now inhabited by either more recent families or by, in one or two cases, their impoverished descendants. Gregorovius
Other interesting Renaissance buildings can be seen by wandering in Todi. The image used as background for this page shows a relief in the portal of S. Fortunato.

Move to page two: the churches.