San Gemini owes its name to a saint who never was; there is a general consensus that Gemini (twins) was a reference to Sts. Cosmas and Damian, two martyrs who were killed during the persecution ordered by Emperor Diocletian.

San Gemini is a very small village, as is usual in Italy, resembling the street of a city; being composed of two rows of high stone houses, and when we have passed the last of them, we are again in the open country. I waited an hour for the lazy diligence, but I passed it very pleasantly in walking about the town and its outskirts, watching the ways of the people, and endeavoring to establish diplomatic relations with some very young gentlemen and ladies, whose mothers had brought them out into the morning light. There was a small café, (..) in which there was a quiet tone of good manners and an absence of rude staring, such as was hardly to be expected in a place where strange faces were probably not very common.
George Stillman Hillard - Six Months in Italy in 1847-1848
San Gemini is made up of a medieval part surrounded by walls with two remaining gates and of a Renaissance enlargement which was completed in the XVIIIth century with the construction of a new gate. All gates bear the coat of arms of the Santacroce who acquired San Gemini in the XVIIIth century.

Palazzo Vecchio; on the right (from the top) old clock showing the Italian hour; detail of the coat of arms of a pope (most likely Pope Eugenius IV); St. George and coat of arms of the Orsini, who owned San Gemini prior to the Santacroce

The heart of medieval San Gemini is Piazza del Palazzo Vecchio (the old town hall): among the many paintings which decorate its walls, a small one portrays St. George, because at one point the inhabitants gave to their unknown patron saint the attributes of St. George (whose existence is very doubtful too).
San Gemini did not belong to the Cesi, but to the Orsini; the two families however were linked, because the wife of Federico I Cesi (and the mother of Federico II Cesi) was an Orsini.

S. Giovanni Battista and details of its decoration

The medieval churches of San Gemini have retained many intriguing details of their original decoration; the portal of S. Francesco in particular shows an unusual mix of animals, human beings and heraldic symbols.

S. Francesco: decoration of the portal

Acquasparta was built on a low rock which per se did not provide adequate protection, so in medieval times it was surrounded by walls strengthened by round towers: its northern side housed a small rocca (fortress); these medieval aspects (including a few narrow streets and an old gate) still characterize some parts of the town. 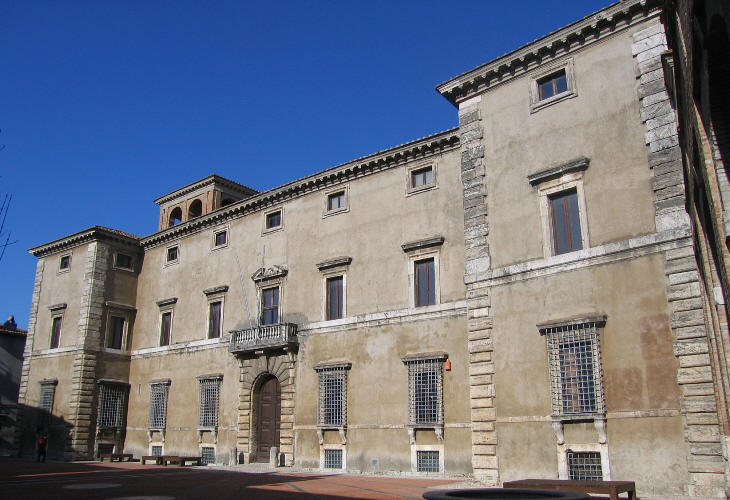 In 1540 the Cesi acquired Acquasparta from the Farnese; in 1561 they started to build a large Renaissance palace which was completed in 1579. Federico II Cesi, who was born in the Roman family palace in Rione Ponte (Palazzo Cesi alla Maschera d'Oro), spent many years at Acquasparta and in 1624 Galileo Galilei visited him. The Cesi had other palaces in Rione Borgo.

The Cesi did not limit themselves to building an impressive family palace, they also gave Acquasparta a new large main church; its interior was decorated with elegant stuccoes.

(upper part - left) Stucco statues holding the coat of arms of the Cesi in S. Cecilia; (upper part - right) detail of the side portal of Palazzo Cesi; (lower part) main square: inscription with a sentence by Federico Cesi

Today the square in front of Palazzo Cesi is decorated with various inscriptions celebrating Federico II Cesi and the other members of Accademia dei Lincei. One of these sentences can prove useful when we deal with a difficult issue: "Unless we identify, gather and fully understand the small things, we will hardly be able to tackle the big ones, not to say the biggest ones..".

(left) A XVIIth century building; (right - above) a detail of its cornice; (right - below) S. Cecilia (exterior): detail of the Cesi Chapel

Interesting Late Renaissance buildings can be seen wandering in and about Acquasparta: occasionally they are in bad need of being restored.
Isabella d'Alviano was a very rich woman: she married Giangiacomo Cesi in 1531; it was with her dowry that in 1540 the Cesi acquired Acquasparta; in 1581 she built a funerary chapel for the family; the image used as background for this page shows a detail of its decoration (exterior).

Move on to Todi or return to page one: Introduction and Cesi.