Palazzo S. Marco
(Vasi at work in the Grand View of Rome)

Links to this page can be found in Book 4, Map B3, Day 1, View C7, Rione Pigna, Rione Campitelli and Rione Trevi. 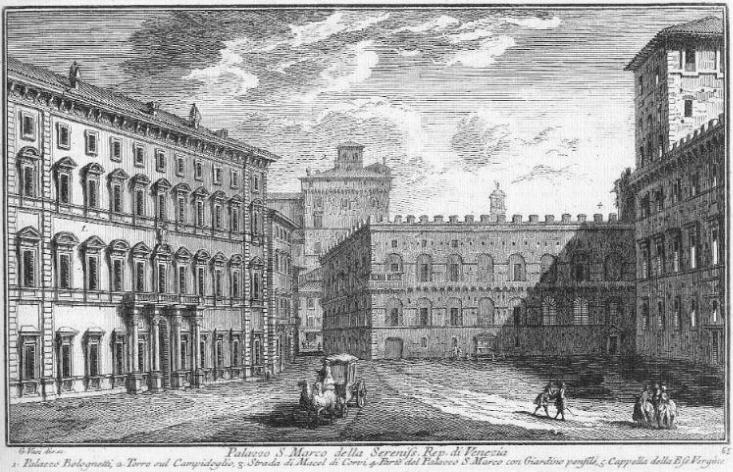 Giuseppe Vasi dedicated two etchings to Palazzo S. Marco (better known as Palazzo Venezia), but in both he did not show the building in its entirety; in the view covering Piazza S. Marco (1752) he showed the wing of the palace to the right of the entrance, in this one (1754) that to its left, which is the older one. The focus of the view is on Palazzetto Venezia and on the tower built by Pope Paul III Farnese on the Capitoline Hill; the bell tower of Palazzo Senatorio can be seen behind Palazzetto Venezia.
The view is taken from the green dot in the small 1748 (b/w) map here below. In the description below the plate Vasi made reference to: 1) Palazzo Bolognetti; 2) Torre sul Campidoglio; 3) Strada di Macel de' Corvi; 4) Palazzetto Venezia; 5) Cappella della Beata Vergine. 3) and 4) are shown in other pages. The small map shows also 6) Palazzo Venezia; the dotted line in the map delineates the borders between Rione Pigna (top left quarter), Rione Trevi (top right quarter), Rione Campitelli (lower left quarter) and Rione Monti (lower right quarter). The coloured map shows the same area in 1925. 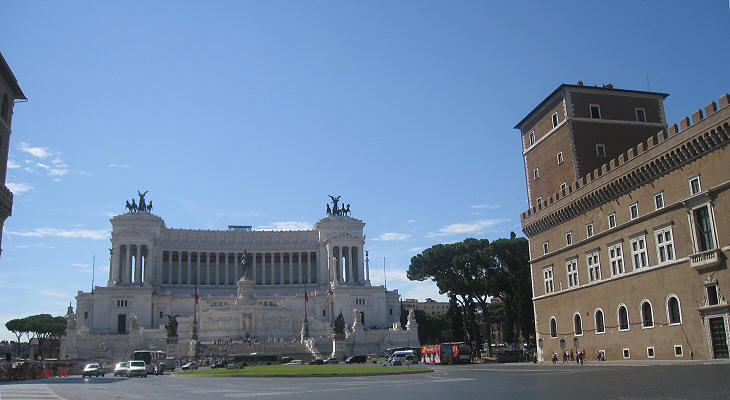 Changes have been quite dramatic; the size of the square is four times what it used to be and it incorporates the area of Palazzetto Venezia which was pulled down in 1911; it was rebuilt near Basilica di S. Marco which is situated behind Palazzo Venezia; Cappella della Beata Vergine, the chapel mentioned in the plate, was reassembled inside Palazzo Venezia.
In 1900 Palazzo Bolognetti Torlonia was pulled down and it was replaced by Palazzo delle Assicurazioni Generali which was built in a rear position.
The entire northern side of the Capitoline Hill was redesigned to make room for a gigantic monument to Victor Emmanuel II, the first King of Italy; Pope Paul III's tower and a major part of Convento di S. Maria in Aracoeli were pulled down. 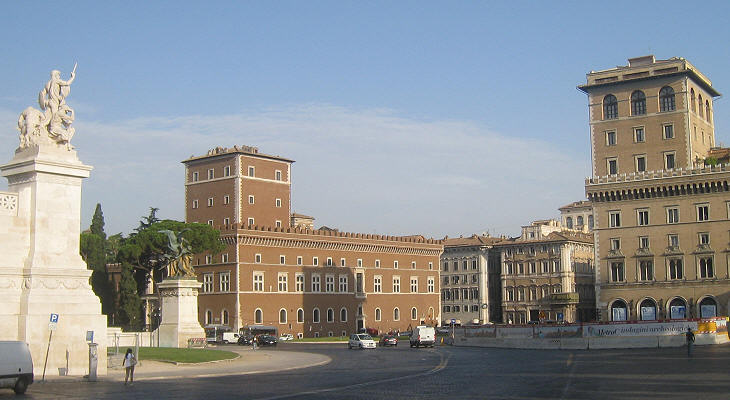 In 1932 the opening of Via dei Fori Imperiali led to the demolition of the remaining buildings on the eastern side of Monumento a Vittorio Emanuele II. 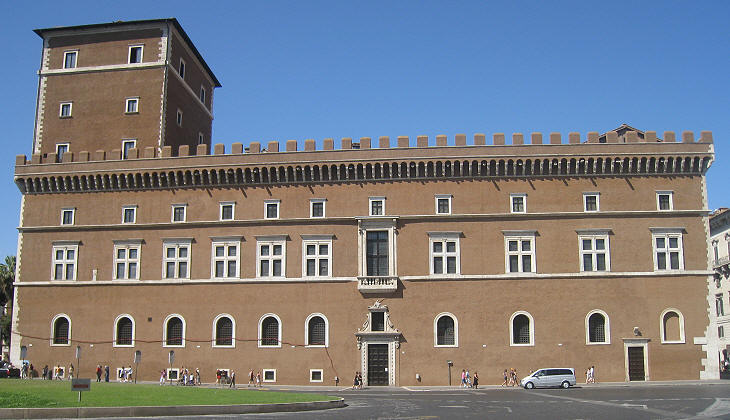 Façade; the original façade had five windows to the left of the central balcony; the first window on the left (below the tower) is modern; it was added when Palazzetto Venezia was pulled down

The construction of Palazzo Venezia was started by Cardinal Pietro Barbo, nephew of Pope Eugenius IV; he was titular cardinal of Basilica di S. Marco and at that time many cardinals used to live near the church they patronized. In 1464 Cardinal Barbo became Pope Paul II and he decided to continue to live in the palace; he then started its enlargement to upgrade it to a standard suitable for a pope; the square in front of the building was embellished with two large basins of Egyptian granite from Terme di Caracalla (they were relocated to Piazza Farnese in the XVIth century).
At the time of Pope Paul II carnival was celebrated with various events including horse races at Monte Testaccio; the Pope moved the races to Via Lata and he set their arrival point in front of his palace. This decision had a great influence on the development of the area, which was rather peripheral; Via Lata became known as Via del Corso (It. corsa means race) and many important families built their palaces along the street to watch the races and the other events of the Roman carnival (read Charles Dickens description of the Roman carnival a few years before the races were abolished). 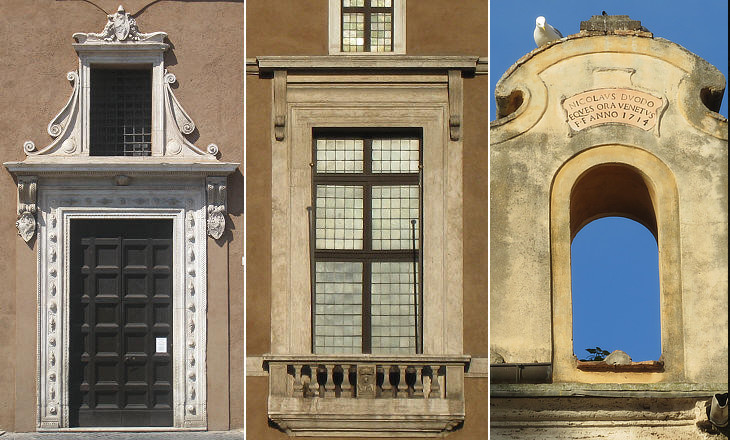 Palazzo Venezia continued to be a papal residence until 1564 when Pope Pius IV presented a part of the palace to the Republic of Venice, because Pope Paul II was of Venetian origin; one section of the building became the residence of the Venetian ambassadors, the other one that of the titular cardinals of the adjoining basilica.
With the 1797 fall of the Republic of Venice, Palazzo Venezia became a property of the Austrian Empire and the residence of its ambassadors; in 1916 during WWI it was confiscated and in 1929 it became the office of Benito Mussolini, the then Prime Minister; he used to make his speeches from the small balcony above the entrance, the last one on May 5, 1943. 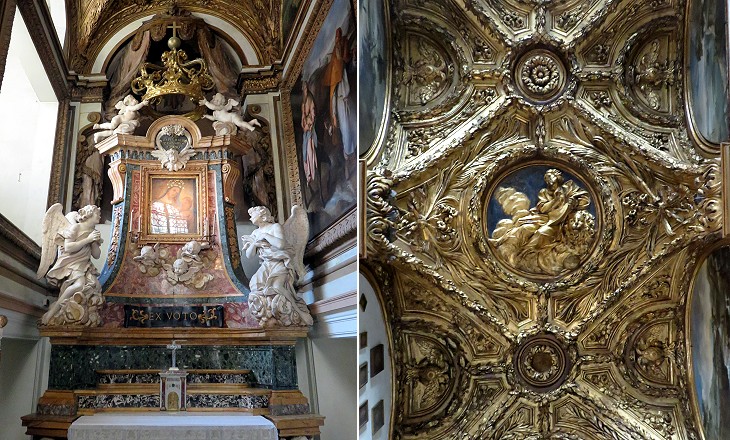 Cappella della Beata Vergine was reassembled inside Palazzo Venezia. Its altar was designed by Giovan Battista Contini and its fine ceiling was paid for by Cardinal Pietro Ottoboni, nephew of Pope Alexander VIII, who belonged to a Venetian family. They are dated late XVIIth/early XVIIIth century. 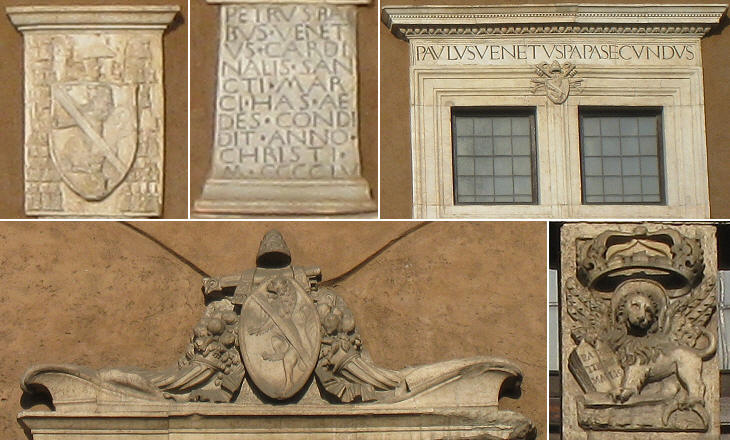 (above-left) Coat of arms and inscription stating that in 1455 Cardinal Pietro Barbo started the construction of the palace; (above-right) detail of a window with the name of the pope (another coat of arms of Cardinal Barbo is shown in the image used as background for this page); (below-left) papal coat of arms above the entrance; (below-right) Venetian winged lion with a paw above an Ottoman crescent moon

Today the palace houses temporary exhibitions and a permanent museum of small objects. 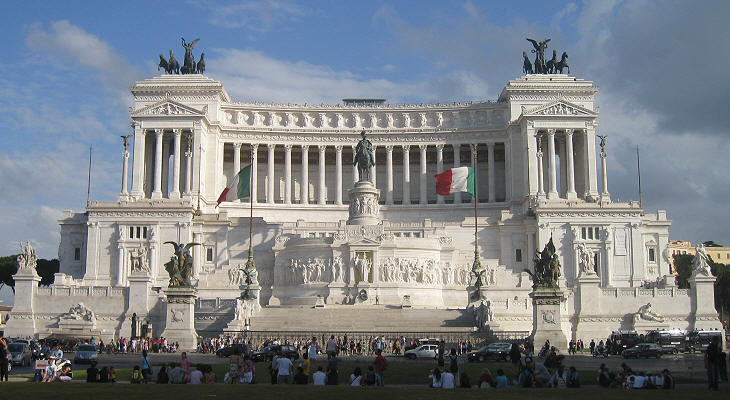 After the 1870 annexation of Rome to the Kingdom of Italy, the new government decided that la Terza Roma (*) should be developed in the area surrounding Stazione Termini, the Central Railway Station; Via Nazionale, a new street which started near S. Maria degli Angeli was opened to link that area with the rest of the city. In 1882 the commission in charge of selecting a project for a monument to King Victor Emmanuel II, decided to build it at the beginning of Via Nazionale. This location would not have interfered with the urban layout of the centre of Rome, but the decision was reversed and it was decided to show a visible sign of the new historical phase in the very heart of Papal Rome: Piazza Venezia.
(*) Terza Roma (Third Rome) was the name given to Rome in many poems and inscriptions celebrating il Risorgimento (the historical process which led to the Unification of Italy); the assumption behind this appellation is that Ancient Rome was the first and Renaissance Rome the second (in world history Second Rome and Third Rome are used with reference to Constantinople and Moscow). Museo di Roma a Palazzo Braschi: inauguration of the Monument on June 4, 1911

National undertakings in Rome are peculiarly difficult and onerous, because they must be commensurate with the scale of antiquity. In a city surviving amid the colossal ruins of the past it would be grotesque to build anything of the modest modern dimensions such as would satisfy the eye in other capitals.
William Dean Howells - Roman Holidays and Others - 1908
The monument was designed by Giuseppe Sacconi; the construction started in 1885 and the monument was inaugurated in 1911 on the 50th anniversary of the Italian Kingdom; a lobbying activity by Giuseppe Zanardelli, a politician from Brescia, led to the use of botticino, a very white marble which was mined in Zanardelli's constituency; because of this choice and of its excessive size the monument is generally regarded as an eyesore in the Roman context; it stands out in all views of Rome with the exception of that from its top terrace. 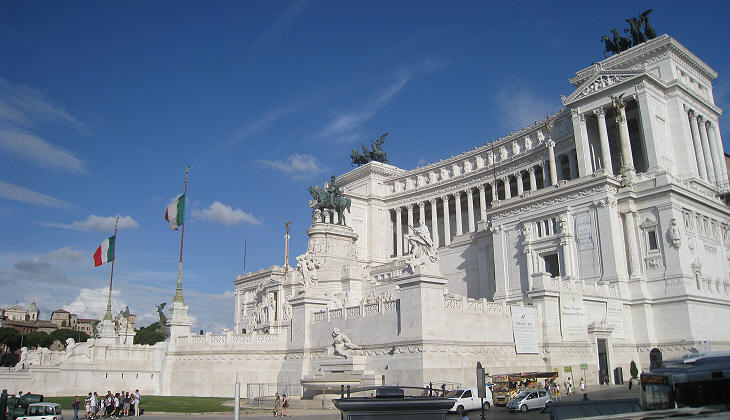 Western side; see a view of its eastern side and of S. Maria in Aracoeli

At the time of its inauguration the decoration of the Monument was not yet completed. The bronze chariots were placed at its top only in 1930. In that same year the opening of Via del Mare, a new road linking the centre of Rome with the southern neighbourhoods and eventually with Lido di Ostia, led to the demolition of several blocks of buildings to the west of the Monument. 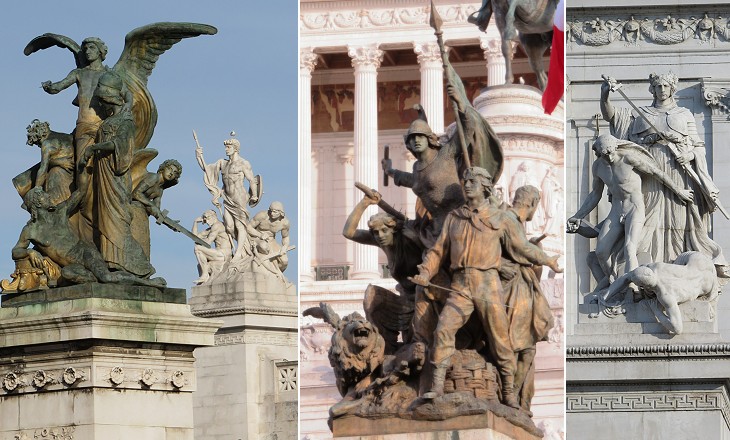 Although the Monument was dedicated to King Victor Emmanuel II, its decoration is not a straightforward celebration of the monarchy. During the XIXth century many Italians were convinced that the unity of the country could only be achieved by the foundation of a Republic. In 1858 Giuseppe Mazzini, the leader of the Republican "party", founded (in London) Pensiero e Azione (Thought and Action), a journal which fostered the unity of Italy by promoting the education of the people and by inciting them to take their destiny in their own hands. Eventually many supporters of Mazzini accepted political positions in the Kingdom of Italy. The fact that two large bronze groups "depicted" Thought and Action was a tribute to Mazzini's ideals. (left) Bronze statue of the King by Emilio Chiaradia (you may wish to see that of German Emperor William I at Koblenz at the junction between the rivers Mosel and Rhine); (right) marble statue by Angelo Zanelli. It portrays a personification of Rome holding Palladion, a lost wooden image of Athena Pallas

King Victor Emmanuel II was buried inside the Pantheon and when the monument to him was completed it was decided not to transfer his body there; in 1921 the monument became the Tomb of the WWI Unknown Soldier (Tomba del Milite Ignoto) and because of this it acquired a new significance; the most important public ceremonies include laying a laurel wreath at the tomb; in official statements the building is now called Altare della Patria.

May 15, 2006: the first act of Mr. Giorgio Napolitano, as newly appointed President of the Italian Republic, was to lay a laurel wreath at the Tomb of the Unknown Soldier 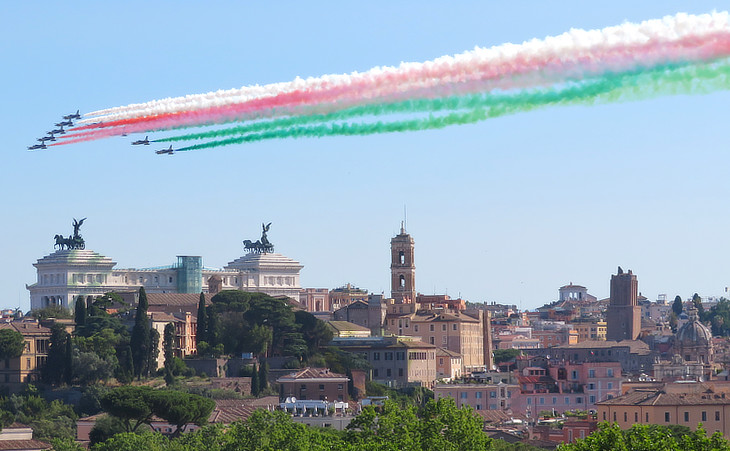 June 2, 2020: the Tricolour Arrows fly over the monument on the anniversary of the establishment of the Italian Republic (from Giardino degli Aranci) 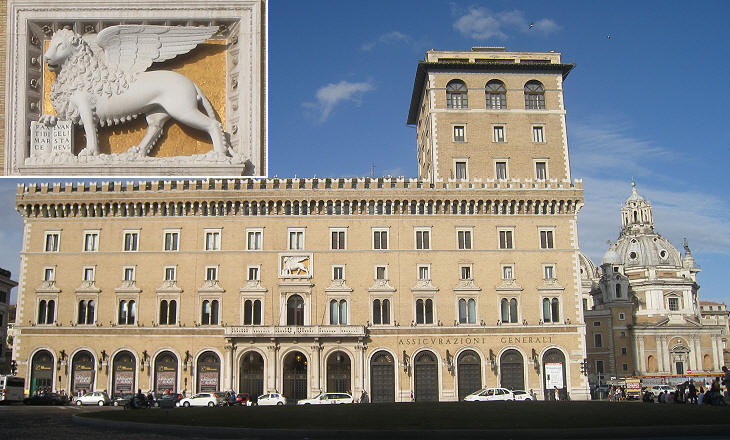 The palace was designed in 1680 by Carlo Fontana for the Bolognetti, Princes of Vicovaro; in 1807 it was bought by the Torlonia who lavishly redecorated its interior.
In 1843 Rev. Jeremiah Donovan wrote in Rome Ancient and Modern: The palazzo Torlonia is undergoing such incessant changes, and is, at present, so difficult of access that our description cannot correspond in all particulars with its state of transition.
Palazzo Torlonia was pulled down in 1900. Palazzo delle Assicurazioni Generali was completed in 1907; it is similar to Palazzo Venezia in size and shape; it was designed by Eugenio Geiringer from Trieste. The present duke has shown considerable taste in the recent arrangements and decorations.
Octavian Blewitt - A Handbook for Travellers in Central Italy - Murray 1850
The Torlonia moved the works of art, especially statues, which decorated their palace at Piazza Venezia to other properties they had in Rome (e.g. Villa Albani, Villa Torlonia, Palazzo Giraud and Palazzo Nunez Torlonia). Some of the stucco/fresco decoration was acquired by the Italian State and it testifies to the economical effort made by the Torlonia to improve their social status by having a palace which could compete with those of the noblest Roman families (e.g. nearby Palazzo Colonna).