Montelibretti and Moricone
(detail of a mural painting in Montopoli) 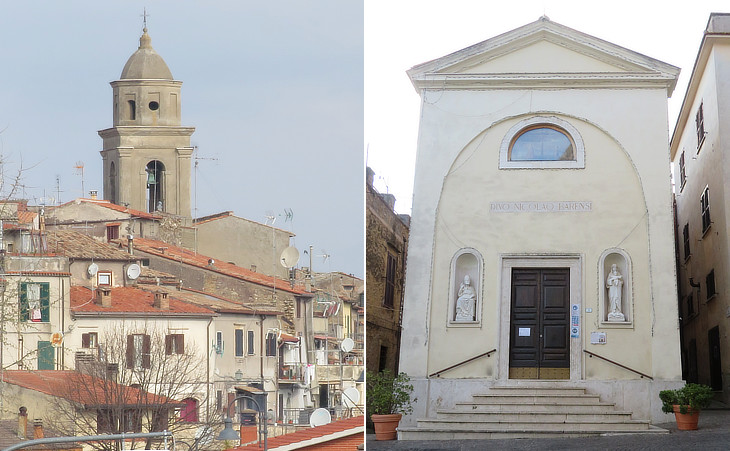 Because of its proximity to Rome Montelibretti experienced a significant increase of its population which began in the second half of the XIXth century and continues to the present day. In 1886 the town hall and the parish church were moved outside the historical fortified settlement on the top of a hill which was first recorded as Castrum Mons Brittorum among the properties of the Abbey of Farfa in the XIth century. The houses grouped around S. Nicola di Bari, the former parish church, have all been modernized and do not retain a medieval aspect also because of the effects of an earthquake which struck Montelibretti in 1915. 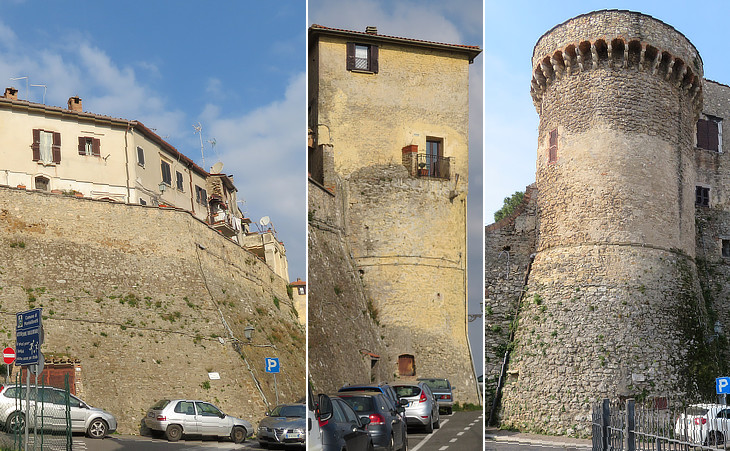 Walls and towers of Castello

Montelibretti was acquired by the Orsini in the XIVth century, but the Abbots of Farfa always retained some rights on the town. In 1562 Montelibretti became the "capital" of a small duchy which included Nerola, Montorio and Monteflavio, other nearby fiefdoms of the Orsini. The fortifications were built during the Orsini tenure of the town. (left) Gate of the old town; (right) coat of arms of Taddeo Barberini, Prince of Palestrina; the coat of arms shows also the heraldic symbol of Anna Colonna, his wife

In 1644 the Orsini sold the Duchy of Montelibretti to Taddeo Barberini, nephew of Pope Urban VIII, who passed away shortly after the sale. Pope Innocent X, the new pope, immediately charged the Barberini with misappropriation of funds and Taddeo fled to France where he died in 1647 without ever setting foot in Montelibretti. The Barberini however retained the possession of the town. 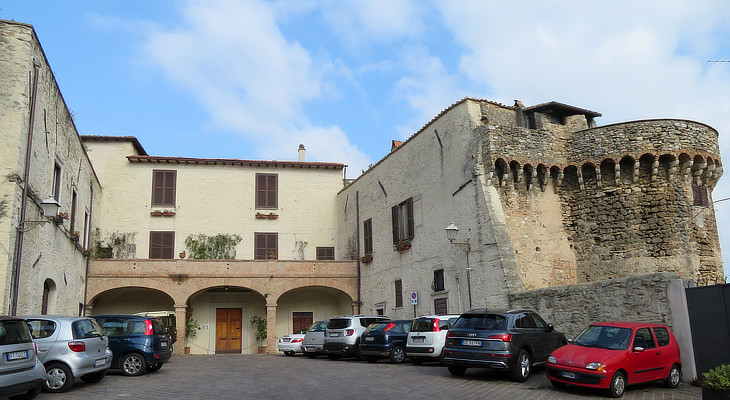 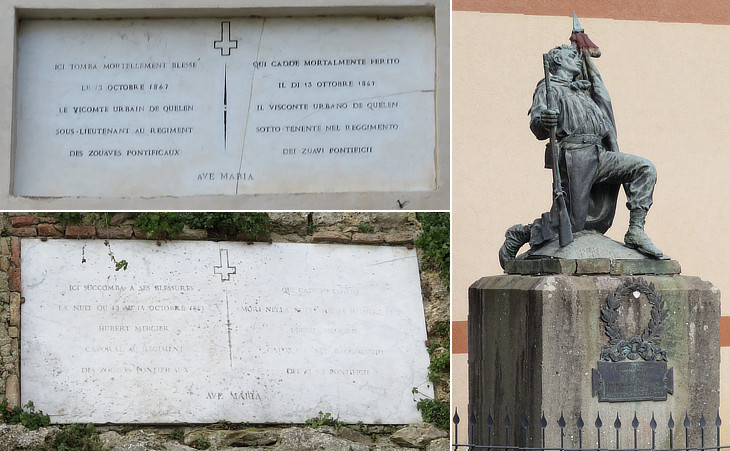 For ten years, between 1860 and 1870, Nerola and Montelibretti were an outpost of the Papal State because the valley below the towns and Via Salaria were part of the Kingdom of Italy. In 1867 the failed attempt by Garibaldi and his volunteers to conquer Rome began with the seizure of these towns. From there they marched towards Monterotondo and Mentana, where they were checked by Papal and French troops and forced to pull back behind the border.
The following is an account of the events at Montelibretti by a Zouave (who was not involved in the fight).
The Sous-Lieutenant de Quelen fought till the last, in worthy emulation of his friend and brother officer Guillemin. He was killed at the end of the action. The fight began at half-past five p.m., and at eight p.m. the Zouaves still held their ground in front of the gate. The night was beautifully calm, and a full moon lit the scene of so much valour. The accounts of the number of the opposing forces in the engagement of Monte Libretti, do not all agree in every particular, but all concur in stating that the Garibaldians were in immensely superior strength to the Zouaves. (..) Although the ninety Zouaves did not succeed at once in dislodging twelve hundred Garibaldians from a strong position, yet it was certainly a victory gained by the Zouaves, as, the Garibaldians having stolen off under cover of the night, the field of battle and the position both remained in the possession of the Pontifical troops. This engagement and victory, having thus been won against such fearful odds as thirteen to one, is worthy of being ranked by the side of the most glorious achievements recorded in history, for although the engagement may not have been so very important in its immediate results, - on account of the small number of men engaged on both sides, - yet it is not always on account of its results that an achievement is immortalised (..) but it is heroism and valour which cause a brilliant action to shine with lustre, and to adorn, in vivid colouring, the page of history. (..) The Impartial (a conservative paper) says: - "In 1249 a Quelen was killed by the side of a brother of St. Louis, at the battle of Massoura. In 1270 another Quelen perished before Tunis with St. Louis himself. In 1867 another Quelen lays down his life for the rights of the Holy See, and the liberty of the Church. Honour to the family. It justifies its proud Breton motto, En 'pel amzer Quelen. ' There are always Quelens.' Yes, there are Quelens to defend religion and right. Honour to them, and honour to all who follow their example."
Joseph Powell - Two years in the Pontifical Zouaves - 1871
Hyacinthe-Louis De Quélen was the Archbishop of Paris in 1821-1839. 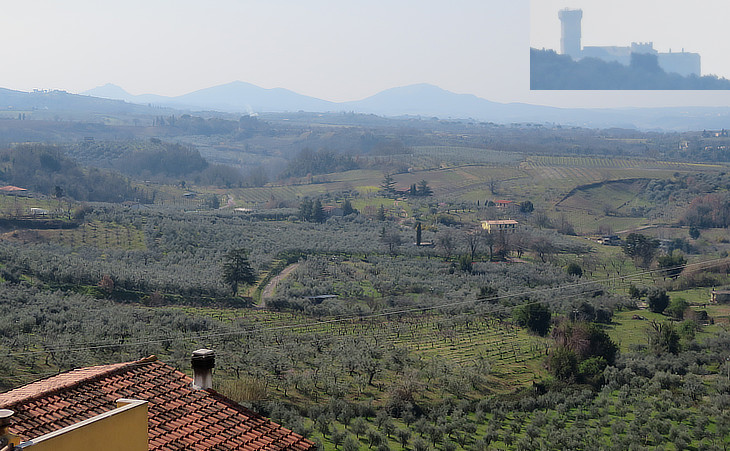 View southwards from the old town: (inset) the Savelli Castle at Palombara Sabina

The first historical records indicate that in the XIIIth century Moricone was a possessions of the lords of Palombara, the southernmost town of Sabina. Some of its fortifications however are dated XIth century; they stand on an isolated hill with a commanding view over the olive groves which surround the town.
The nearest and least rocky of these hills were stripped of their native woods and olives planted in their stead. This tree appears to delight in the soil and climate of Italy. (..) The young olive-plant bears at two years old; in six years it begins to repay the expence of cultivation, even if the ground is not otherwise cropped. After that period, in good years, the produce is the surest source of wealth to the farmer, and the tree rivals the oak in longevity; so that the common proverb here is, "If you want to leave a lasting inheritance to your children's children, plant an olive".
Lady Maria Callcott - Three months passed in the mountains east of Rome, during the year 1819 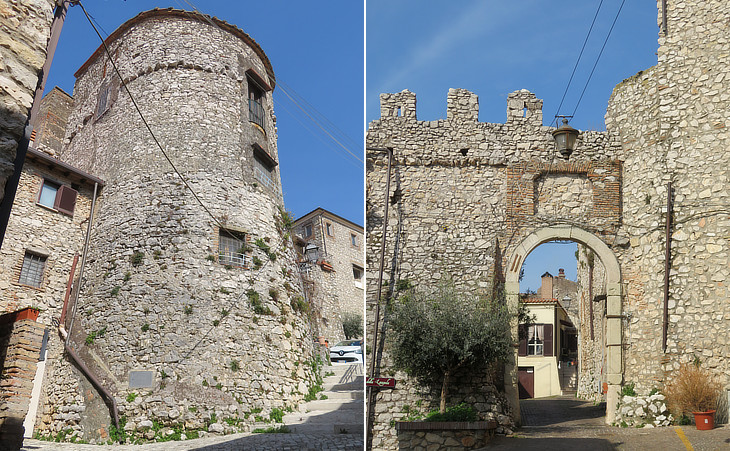 The very steep ascent upon which Moricone stood discouraged attempts to redesign it. The old town retains a picturesque medieval aspect, but very few people still live there. It was largely built of a white flint which was quarried on the site. 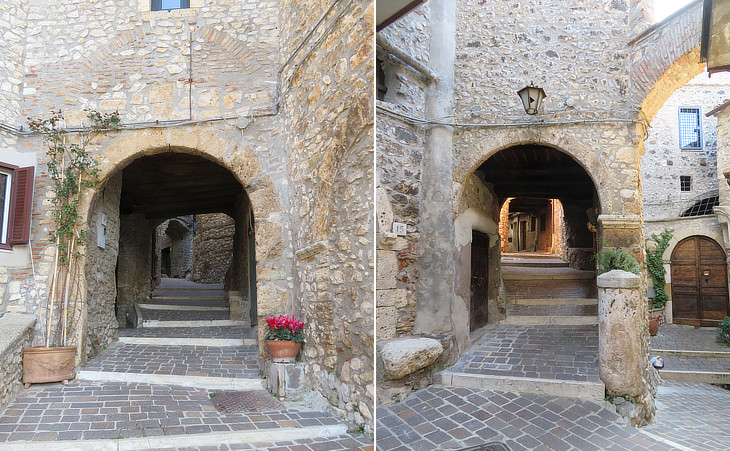 The vaulted passages which characterize the old town were not built for charm, but to strengthen the overall solidity of the buildings in a region subject to earthquakes, to provide a shelter during the windy winter season and for defensive reasons. You may wish to see the vaulted passages of Cervara, a small town in the mountains near Subiaco, which were painted by Ernest Hébert in 1858. 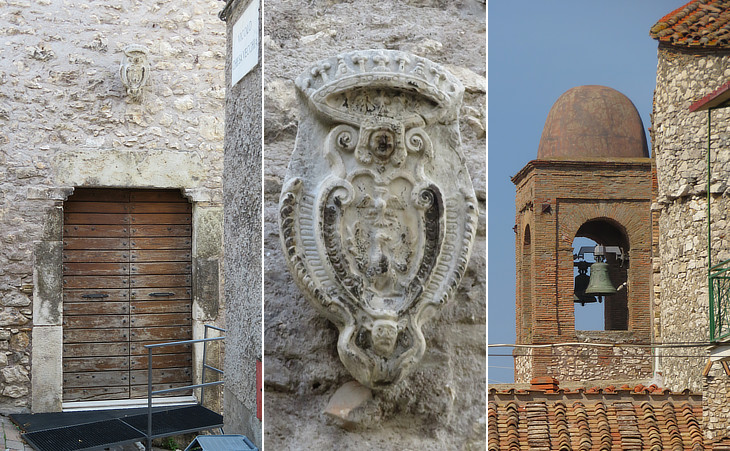 In the early XVIIth century Moricone was bought by Marcantonio II Borghese, nephew of Pope Paul V. The Borghese, who possessed also Palombara and many fiefdoms in the Castelli Romani, e.g. Monte Porzio and Montefortino, did their best to improve the living conditions of the inhabitants of Moricone. They built a short aqueduct and two olive mills for the local production of oil. 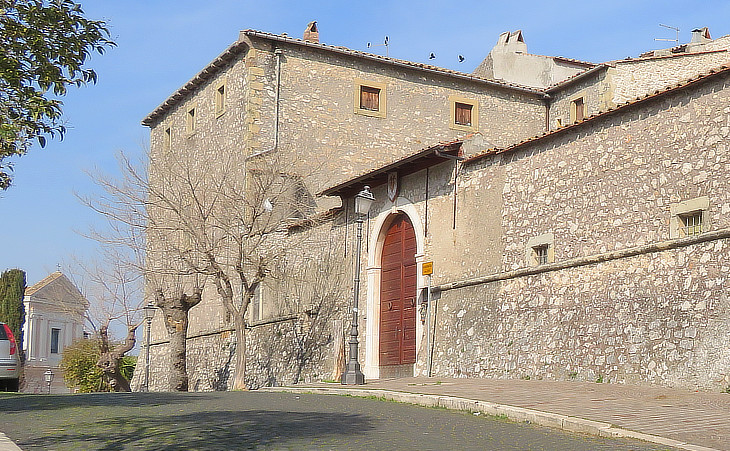 Palazzo Savelli (the image used as background for this page shows a detail of the coat of arms of Moricone, a dove on a mountain, above the gate of the building)

The Borghese opened a second gate to develop an area adjoining the walled town were they built a residence, improperly named after the Savelli. It has the aspect of a fortification, because being outside the walls it could be attacked by bands of banditti (brigands).
The banditti or forusciti of Italy are what the forest outlaws of England were in the days of Robin Hood. They are not of the poorest or vilest of the inhabitants. They generally possess a little field and a house, whither they retire at certain seasons, and only take to the field when the hopes of plunder allure them, or the fear of a stronger arm drives them to the woods and rocks. Callcot 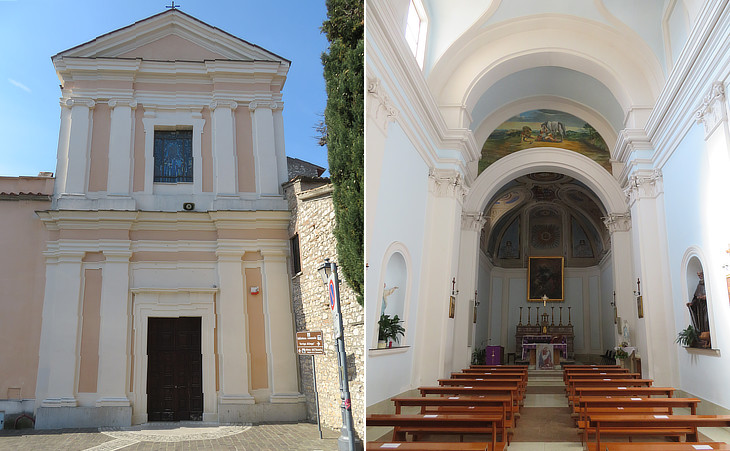 The parish was moved to a new church which was dedicated to the Assumption of Mary, similar to what occurred in many other hilltop towns, e.g. Rocca Priora and Montecompatri.
Several of the principal persons here, never having seen heretics before, except struggling in flames in a picture, questioned us very minutely as to our faith; and when we acknowledged our want of belief in the Virgin and saints, and our disregard of images and pictures, they shrunk involuntarily, and earnestly entreated us to be of their church; if for nothing else, that we might enjoy the mediation of the saints, and more especially of the blessed Virgin, whose intercession was all-powerful with her Son, and with his Father. Callcott 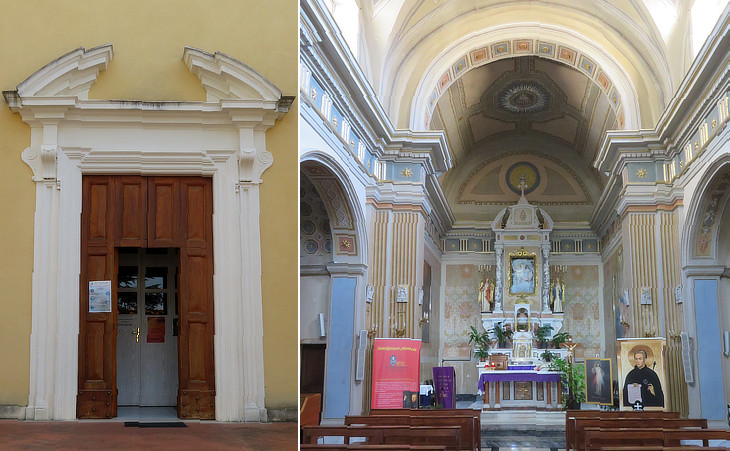 Chiesa di Gesù e Maria: (left) portal; (right) interior with a portrait of St. Paul of the Cross (1694-1775), the founder of the Passionist Order

The Piarists (aka Scolopi after Scuole Pie) are members of an order founded by St. Joseph Calasanz and approved by Pope Gregory XV in 1622. The Piarists had begun their charitable activity in 1597 in the sacristy of S. Dorotea. Their primary goal was to provide free education for poor children (as they did at Poli, a town between Tivoli and Palestrina in 1629). In 1639 the church of their school outside Moricone was consecrated. It was not entirely new as it stood on the site of a XVth century one. In 1839, after a period of abandonment, it was assigned to the fathers of the Congregation of the Passion of Jesus Christ, to whom it still belongs. The interior is entirely modernized.