Porta Settimiana
(Vasi at work in the Grand View of Rome)

Links to this page can be found in Book 1, Map D3, Day 6, View D8 and Rione Trastevere. 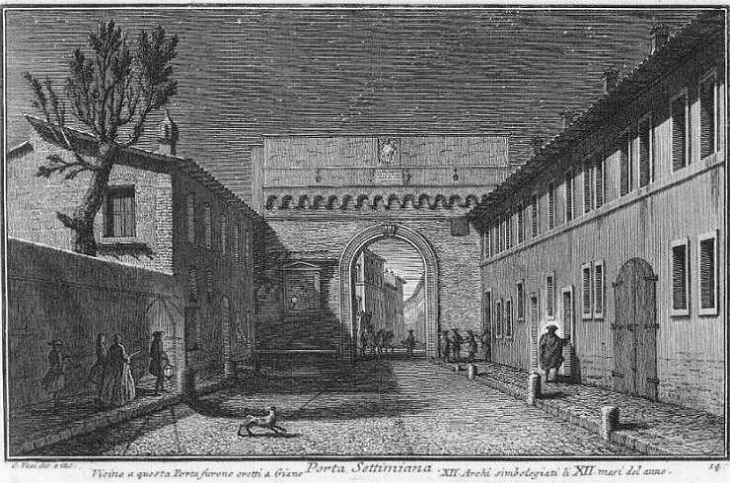 The walls built on the Janiculum hill by Pope Urban VIII in the XVIIth century made the ancient Roman walls of Trastevere useless; therefore Porta Settimiana, their northern gate on Via della Lungara, had no need to be closed at night. In 1747 Giuseppe Vasi took this opportunity to show a scene of Rome in the moonlight, a very popular way of seeing Rome in the XVIIIth century. Public illumination was limited to some oil-lamps in front of sacred images and people had to carry a light with them as shown in the image used as background for this page.
The view is taken from the green dot in the small 1748 map here below which shows: 1) Porta Settimiana; 2) remaining tower of the ancient walls; 3) S. Dorotea; 4) S. Giovanni della Malva; 5) Palazzo del Cinque. 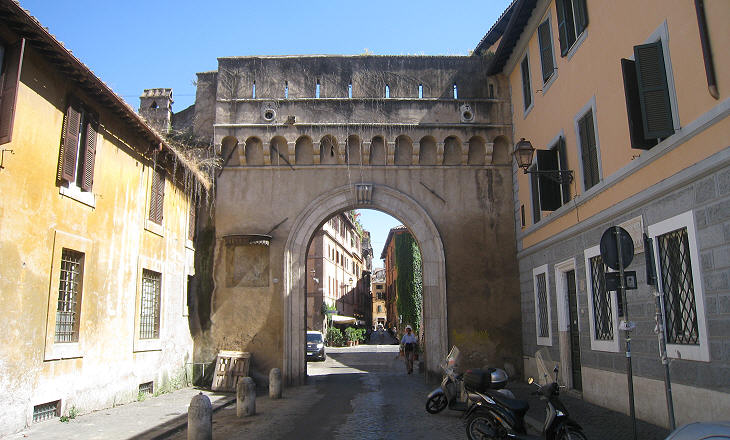 The coat of arms of Pope Alexander VI above the arch has disappeared, but otherwise this corner of Trastevere is almost unchanged. Because traffic flows along the modern lungotevere, which runs parallel to Via della Lungara, there has not been a need to enlarge the gate or to make other openings in the walls; the buildings inside Trastevere have retained the overall aspect they had in the etching. The building to the right of the gate housed Museo Torlonia. (left) Trastevere side of the gate; (right) a tower of the ancient walls between the gate and the River Tiber

The gate is named Settimiana after Emperor Septimius Severus who was mentioned in a lost inscription above the arch; apparently it was the entrance to baths built by the Emperor in Trastevere (which have not been located exactly); it became a gate in 275 AD when Emperor Aurelian protected Rome with new walls. In 1498 the gate was given its current aspect by Pope Alexander VI. 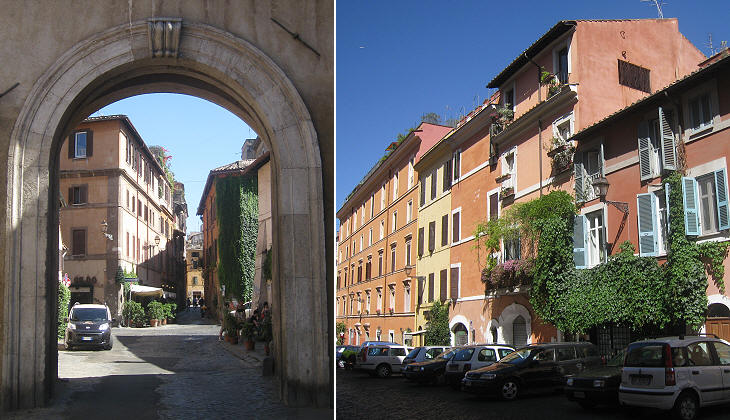 Landlords who rent small flats on a weekly basis advertise their offers making reference to the picturesqueness of Trastevere; that the neighbourhood is picturesque is a fact, but as Shakespeare wrote: all that glisters (glitters) is not gold. Proposed accommodation should be double-checked to avoid discovering when it is too late that the landlord assumed his guests regarded noise, dampness and darkness as picturesque. 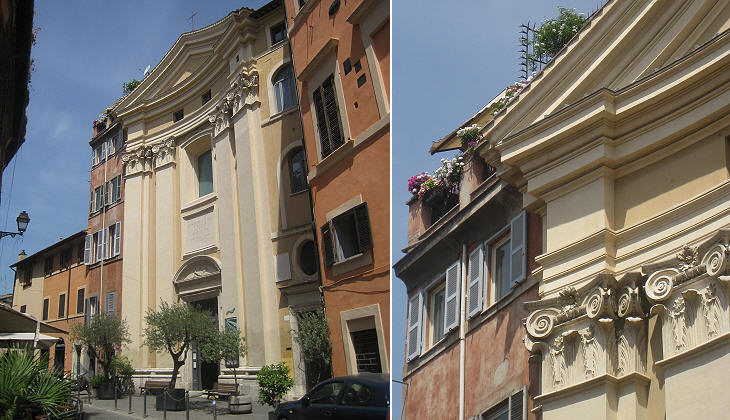 (left) S. Dorotea; (right) detail of the capitals and a small pensive garden

Giovan Battista Nolli is mainly known for the very detailed Map of Rome he drew in 1748 and of which small details are used in this website to show the exact location of the monuments covered in each page. Similar to Vasi, Nolli was an unemployed architect who turned to engraving to earn his living.
The reconstruction of S. Dorotea, a medieval church near Porta Settimiana, is almost his only work as an architect. The new church has a concave façade which fits very well with a turn of the narrow street; this baroque element however is accompanied by a plain design which anticipates neoclassic patterns. 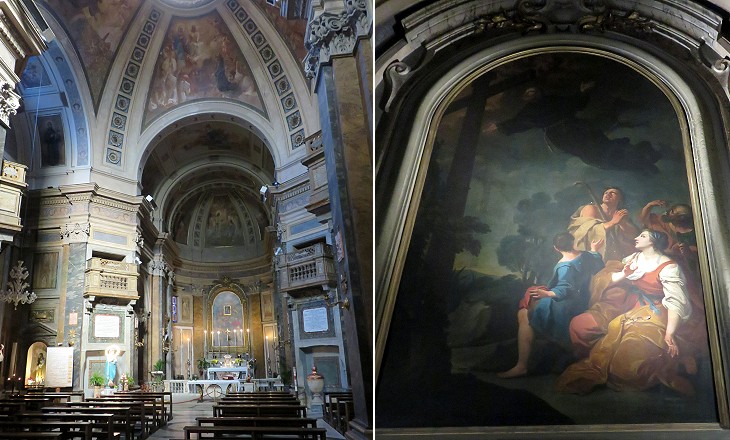 The church belonged to an adjoining Franciscan monastery and its interior is mainly decorated with XXth century works of art with only a few altarpieces of the XVIIIth century. In 1597 St. Joseph Calasanz founded the first public free school of Rome in two rooms of the sacristy of this church. 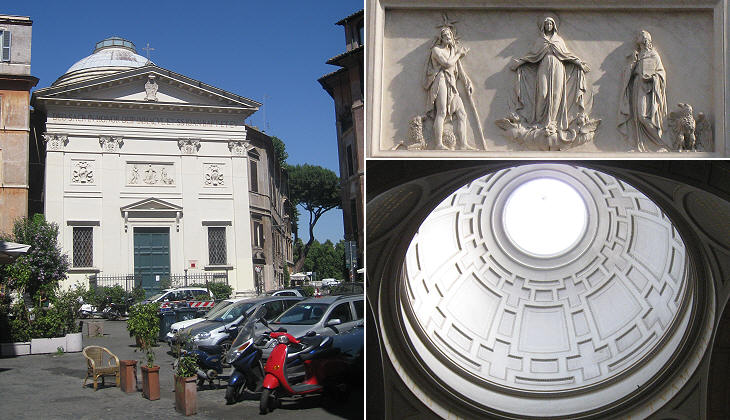 (left) Façade and to its right street leading to Ponte Sisto; (right-above) relief showing the two St. John; (right-below) interior of the dome with a central opening similar to that of Pantheon

There are many churches in Rome which are dedicated to St. John the Baptist, while St. John the Evangelist is less popular; in some cases (the most famous one being S. Giovanni in Laterano) the church is dedicated to both saints. S. Giovanni della Malva is one of these cases and a relief on the façade shows the two saints. The church was entirely rebuilt in 1851 by Giacomo Monaldi.
The name of the church has always puzzled art historians: malva is the Italian name for mallow and it does not seem very likely that the church was named after it; the most common explanation believes malva to be a corruption of mica aurea (golden loaf) perhaps because loaves were distributed in this very old church during some festivities (this practice was not uncommon and it is remembered in the name of another church, S. Biagio della Pagnotta). 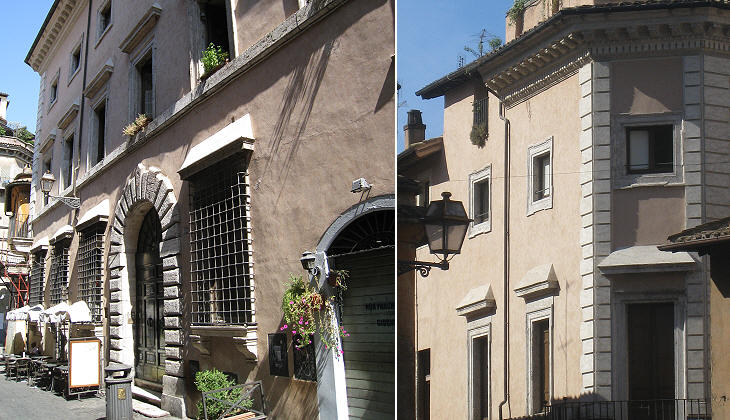 In the XVIIIth century the Del Cinque family built a very decorated "apartment block" near Piazza di Montecitorio, but the origin of the family can be traced to this palace in Trastevere which was built in the second half of the XVIth century.