Other Castelli Romani
(a detail of G. Vasi's Grand View of Rome) 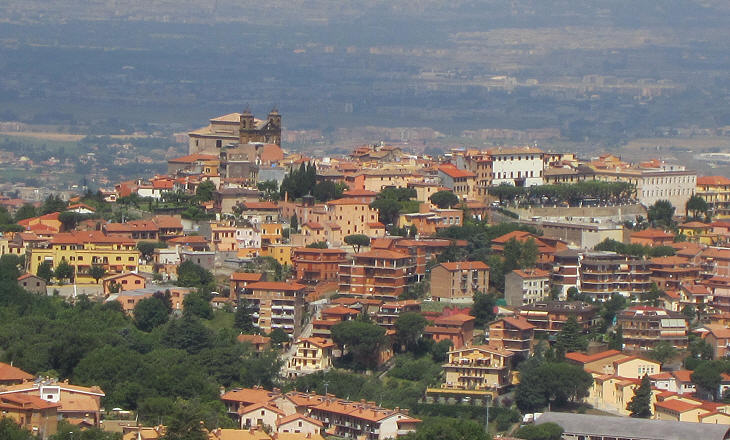 Monte Porzio is situated at the northern edge of the Alban Hills, a few miles east of Frascati. In 1872 a reference to Marcus Porcius Cato was added to its name to distinguish it from another town near Urbino. Cato, a Roman magistrate and politician, was born near Monte Porzio in 234 BC and he is best known for having ended all his speeches by the words Ceterum censeo Carthaginem esse delendam (Furthermore I think Carthage must be destroyed). 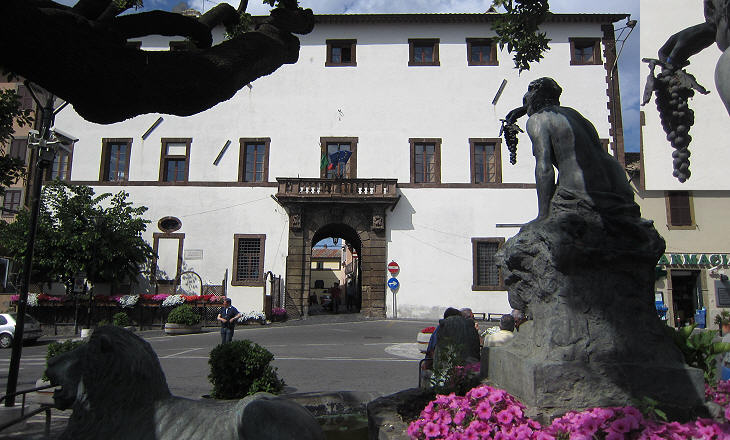 Palazzo Borghese and the entrance to the town

Monte Porzio acquired the appearance of a small town after Cardinal Marco Sittico Altemps bought its territory to build a large villa on a nearby hill. The Altemps promoted the development of the town and their action was completed in the following century by Cardinal Scipione Borghese, nephew of Pope Paul V, and his heirs. Monte Porzio is surrounded by vineyards and the square opposite the only entrance to the town has been embellished with a modern fountain celebrating the main economic resource of the town (you may wish to see Sagra dell'Uva at nearby Marino where fountains pour wine). 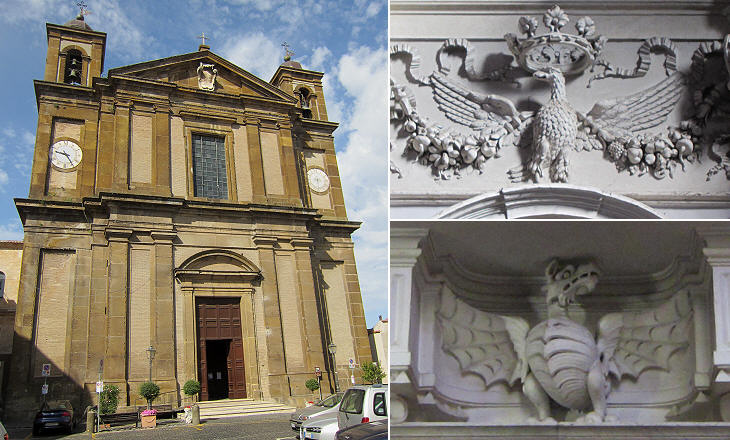 S. Gregorio Magno: (left) façade; (right) eagles and dragons, the heraldic symbols of the Borghese in the decoration of the interior

The parish church of Monte Porzio was dedicated to St. Gregory the Great in honour of Pope Gregory XIII who visited the small town, at the time a village, and recommended the construction of a proper church. The current building was designed in 1666 by Carlo Rainaldi, one of the most important architects of Rome. 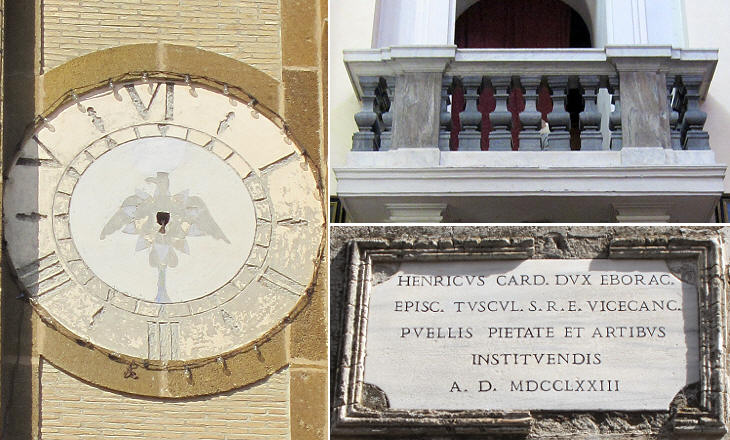 (left) Old clock on one of the bell towers; it indicated the "Italian Hour"; (right-above) a detail of the interior of S. Gregorio Magno; (right-below) 1773 plaque celebrating the construction of a hostel for poor girls by Cardinal Henry Benedict Stuart, Bishop of Frascati (Tusculum) and Duke of York 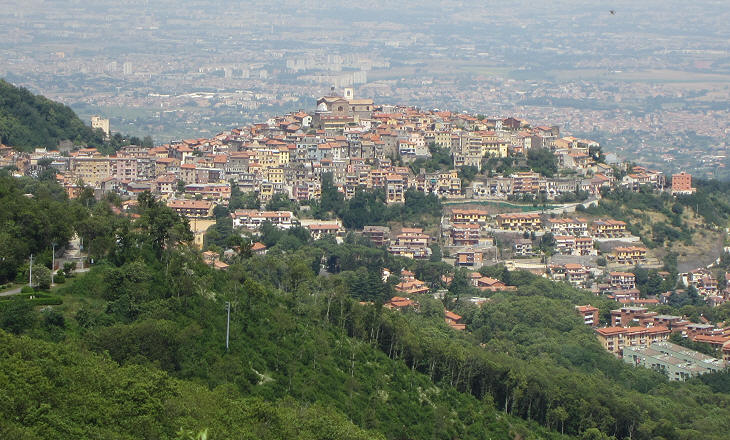 The history of Monte Compatri is very similar to that of Monte Porzio. The town is located on a rear position in respect to Monte Porzio and on higher ground. In the XVth century it was fortified by the Colonna with the construction of a tower which eventually became the bell tower of the parish church. 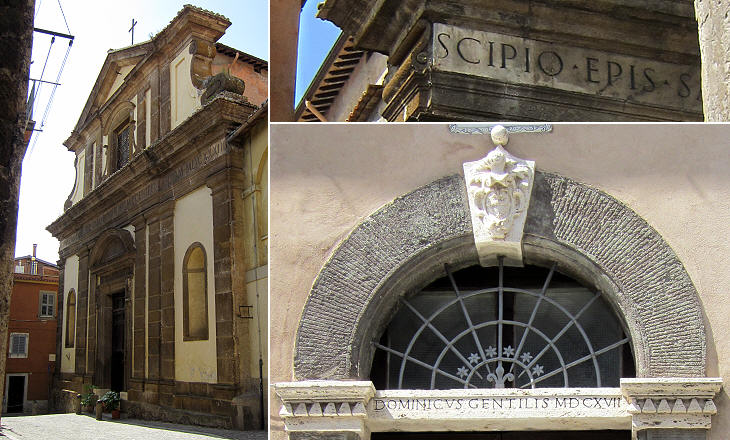 (left) S. Maria Assunta; (right-above) section of the inscription making reference to Cardinal Scipione Borghese; (right-below) portal of a house which belonged to a local nobleman in 1617

Similar to other churches of nearby towns, e.g. Ariccia, the parish church was dedicated to the Assumption of Mary, probably because it was situated at the top of the town. The façade was completed in 1633 and it was most likely designed by Girolamo Rainaldi, an architect who worked for Cardinal Borghese and who decorated Portale delle Armi at Frascati, by using the same volcanic dark stone. Girolamo was the father of Carlo Rainaldi.
Similar to Monte Porzio, the economy of Monte Compatri relies on its wine and the image of grapes which you see in the background of this page comes from the sign for a local restaurant. 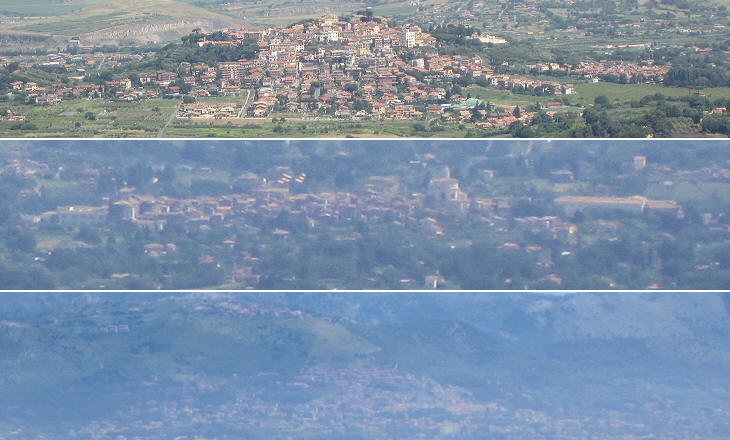 Rocca Priora is located at 768 meters (3000 feet) and it is the highest of the Castelli Romani. Because of its commanding position at the eastern edge of the Alban Hills several families fought for its possession. In the XIIIth century it belonged to the Annibaldi who in 1382 sold it to the Savelli. 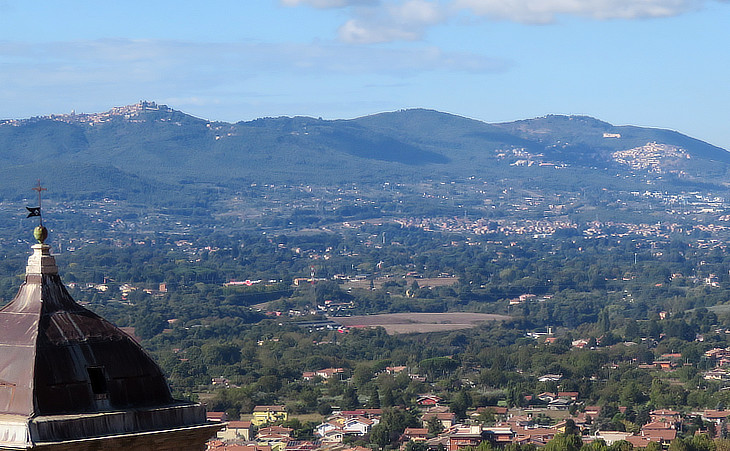 View of Rocca Priora (left) and Montecompatri (right) from Palestrina

Towards the end of the XVIth century the Savelli, because of financial difficulties sold Rocca Priora to the Papal State. 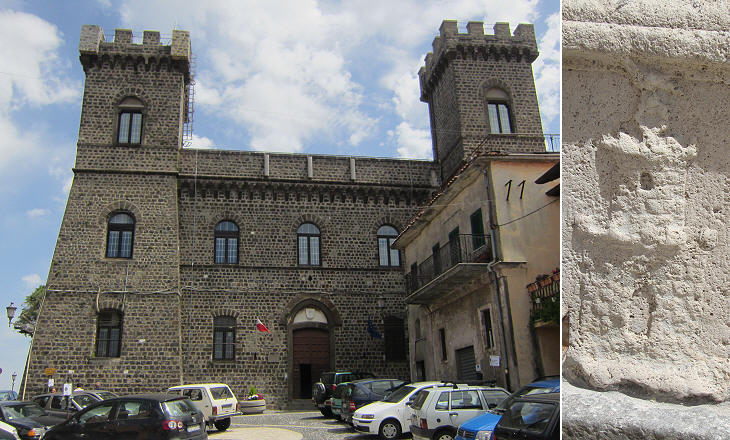 In 1806 part of Rocca Priora was acquired by Lucien Bonaparte, brother of Napoleon, who, after some brigands tried to kidnap him when he was at Villa Rufinella in Frascati, sold his share of Rocca Priora and retired to Canino.
In 1880 the castle built by the Savelli was pulled down to make room for a medieval-looking Town Hall. 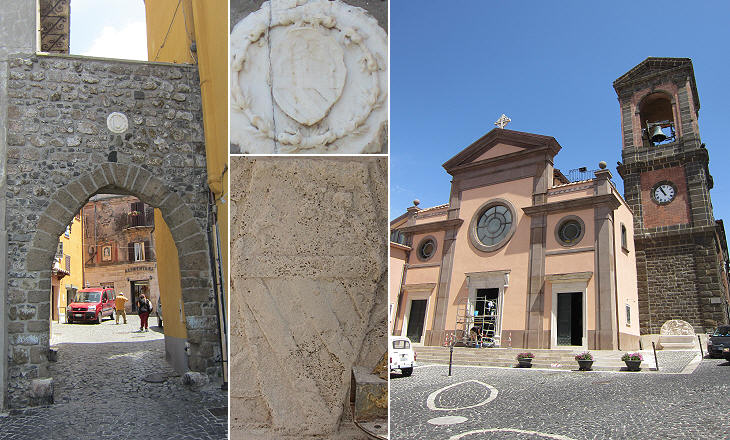 A narrow gate was the only access to the town until a modern road leading to the Town Hall was opened in the late XIXth century. The parish church was renovated in 1914; luckily it retains its Renaissance portal with the coats of arms of the town and of the Savelli (you may wish to see a clearer Savelli coat of arms at S. Maria in Aracoeli.
In winter the inhabitants of Rocca Priora had a chance to earn a little money by storing snow in nearby caves. The snow was pressed and in summer it was sold to rich Roman families. 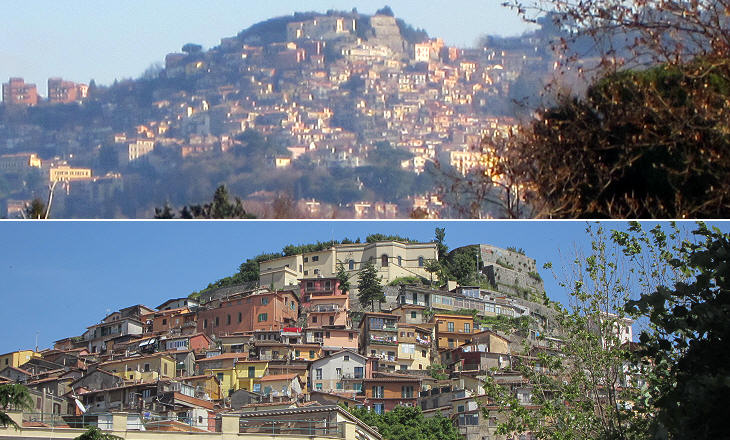 December 15 1787. On Thursday we walked from Frascati to Monte Cavo via Rocca di Papa of which I will send you some drawings for verbal descriptions are meaningless
J. W. Goethe - Italian Journey - Translation by W. H. Auden and E. Mayer - Collins 1962.
Rocca di Papa, a wretched little town with 3,000 inhabitants, in the midst of beautiful forest-scenery, is well adapted for a summer residence on account of its lofty situation (2647 ft). Rooms, even for one night, may be heard of at the Caffè dell'Aurora, in the upper part of the town.
1883 Baedeker of Central Italy
Many XVIIIth century travellers described the excursions they made to Rocca di Papa from Frascati: .
The town became a location for long stays after it was made popular by Massimo D'Azeglio, an Italian statesman and painter who wrote about Rocca di Papa in his memoirs (Things I Remember). He so described the origin of Rocca di Papa and other medieval towns:
All know that, in those ages, the poor and weak had the choice of being assassinated in two ways, but they were obliged to choose; either assassinated by casual wandering brigands, or by established brigands, settled in the fortresses. Generally the preference was given to the second, and thus around the fortresses was formed a trembling settlement of hovels and huts of "contadini", which were afterwards changed into villages, towns, and cities, a preference which speaks to the praise of those poor calumniated barons of the Middle Ages. 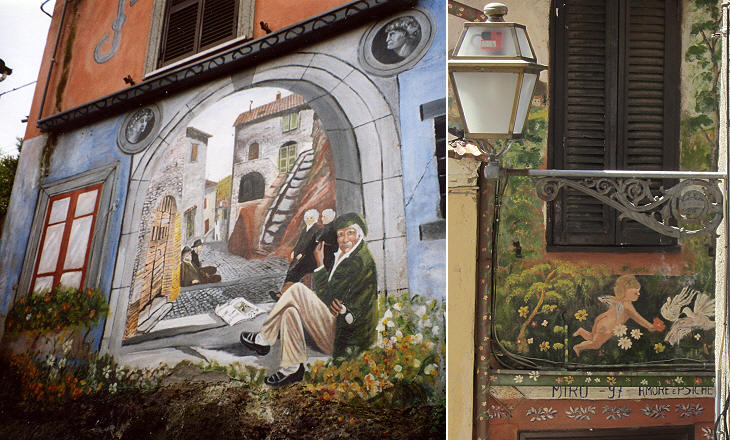 Massimo d'Azeglio was not the only artist who chose Rocca di Papa as his residence. Theodor Wilhelm Achtermann was a German sculptor who specialized in religious subjects (a Gothic altar with three reliefs representing scenes from the life of Jesus is in the Cathedral of Prague). He spent many years in the upper part of Rocca di Papa and he was followed there by other German artists, mainly from Bavaria so that the neighbourhood where they lived is known as the Bavarian Quarter.
The City of Rocca di Papa has promoted the decoration of buildings with large mural paintings in memory of the artists who lived there. 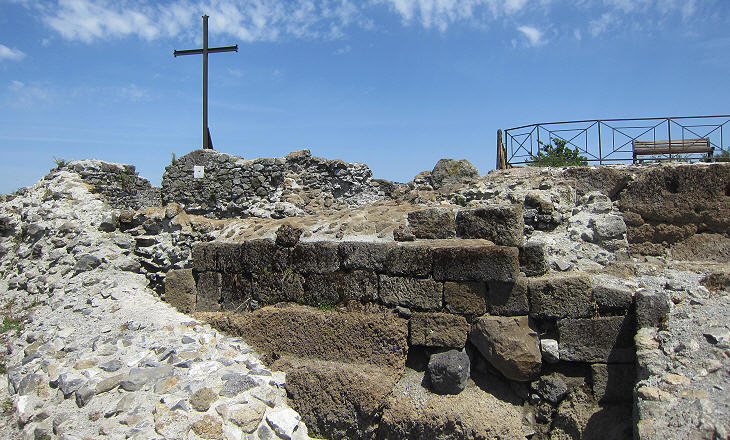 The town owes its name to a small medieval castle (It. rocca) at its top. It was built in the XIIth century, but it was demolished by Pope Paul III. Recent archaeological excavations have unearthed some very ancient walls which indicate that the site was fortified by the Latins. 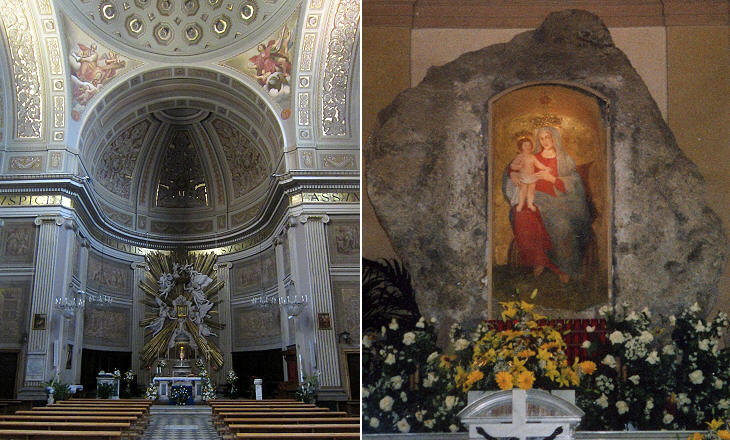 (left) Interior of S. Maria Assunta (XIXth century); (right) painting on a rock by Antoniazzo Romano at Madonna del Tufo on the road to Nemi

Until 1870 Rocca di Papa was a fiefdom of the Colonna who did not care much about embellishing the town or improving the living conditions of its inhabitants; all economic activities were subject to the payment of duties to the Colonna. Rev. J. Donovan in 1844 made reference to the squalid misery of the town. In 1855 the poor inhabitants revolted against the Colonna and declared the Repubblica di Rocca di Papa which lasted only six days and ended with 17 peasants being jailed for many years. 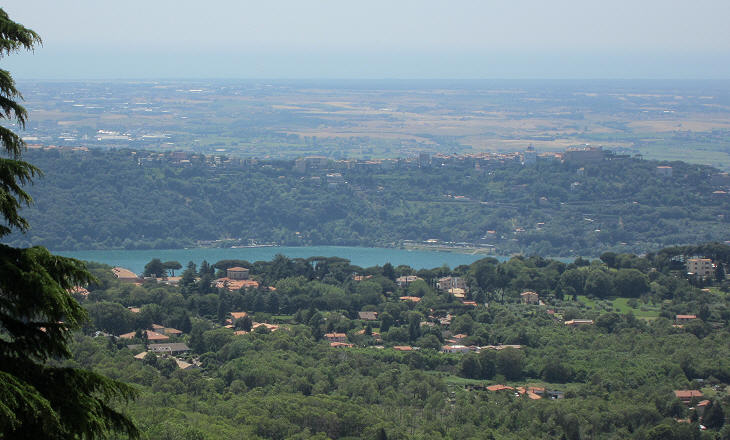 Next step in your tour of the Environs of Rome: Anzio