The earliest papal coats of arms cannot be found in Rome, because during the XIIIth century very often the popes were unable to reside in the city of which they were bishops: in addition Roman medieval churches and buildings where the popes might have placed their heraldic symbols were rebuilt or modified in the following centuries (see a directory listing the remaining medieval monuments of Rome).
One of the earliest references to the symbols of the popes can be seen on a medieval building at Montefiascone. 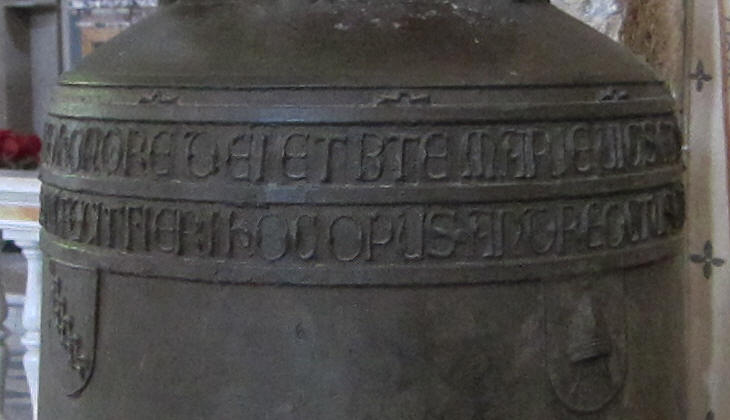 The Caetani, the family of Pope Boniface VIII, controlled several towns in southern Latium and they fortified Via Appia, the road linking their fiefdoms to Rome; the ancient tomb of Cecilia Metella was turned into a Caetani fortress and two coats of arms were placed at the entrance of the residence they built near the tomb. A Caetani tower controlled Ponte Quattro Capi, one of the two remaining bridges of Ancient Rome. Yet, notwithstanding the power of his family, Pope Boniface VIII preferred to reside in Anagni, a Caetani fiefdom, rather than in Rome; he enlarged the cathedral and in 1296 he donated a bell which was decorated with the papal tiara (which the Pope himself redesigned) and the Caetani coat of arms. 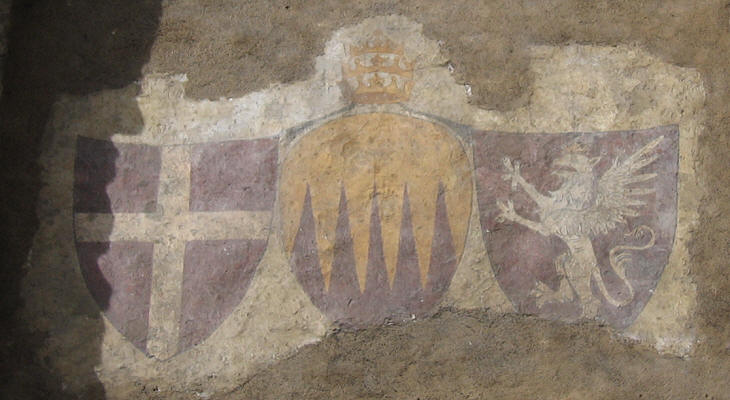 Coat of arms of Pope Urban V in Porta S. Francesco in Assisi

In 1309 Pope Clement V decided to permanently settle the papal court at Avignon in southern France and this explains why there is no evidence of papal coats of arms in Rome or the Papal State during the first half of the XIVth century. Pope Urban V responded to the many calls for the return of the Pope to Rome, by asking Cardinal Jil Alvarez de Albornoz to restore authority in the papal Italian possessions; Cardinal Albornoz conquered many towns and fortresses of northern Latium and Umbria and he placed there the coat of arms of the pope. In 1367 Pope Urban V returned to Rome, but he soon withdrew to Viterbo. 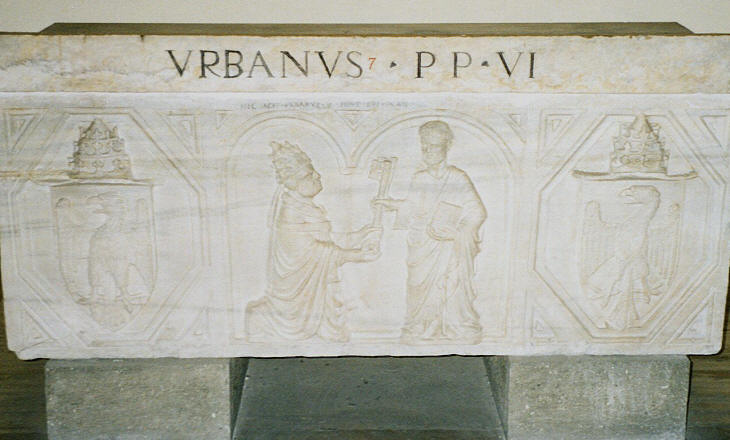 Tomb of Pope Urban VI in the Vatican Grottoes showing St. Peter giving his keys to the Pope

The final return of the Pope to Rome in 1377 was followed by a period of conflict which is known as the Great Schism; at one point three popes claimed to be the true successors of St. Peter; this explains why their coats of arms can be seen on fortifications rather than churches, as Pope Boniface IX did on a tower of Palazzo Senatorio and a fortress at Narni; some of them were able to place their heraldic symbol only on their funerary monuments. 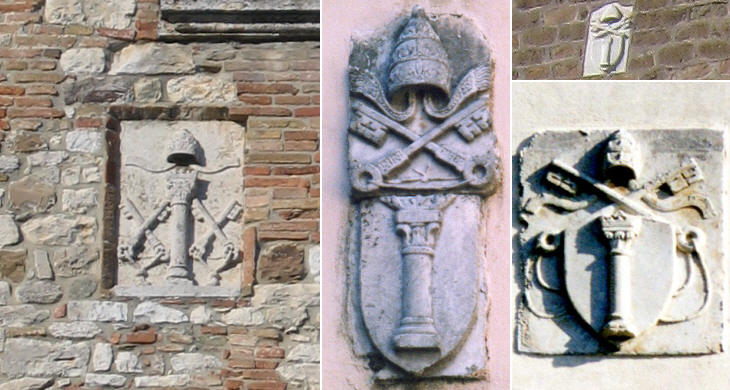 Small coats of arms of Pope Martin V in towns around Rome (Barbarano, Todi and Genazzano)

It was only during the pontificate of Pope Martin V that Rome returned to be the (almost) permanent residence of the papal court; the Colonna, the family of the Pope had many fiefdoms around Rome where one can see his coats of arms, which began to acquire a consistent design with the family heraldic symbol placed on a shield and the tiara and the keys above it. While the coats of arms of Pope Martin V lacked artistic interest, those of his successors started to be more accurately designed; also their size became larger, not a mere small tablet, but a large piece of marble, very often the interior of an ancient sarcophagus. Another coat of arms of Pope Calixtus III in S. Prisca shows an elaborate design and a skilled execution. 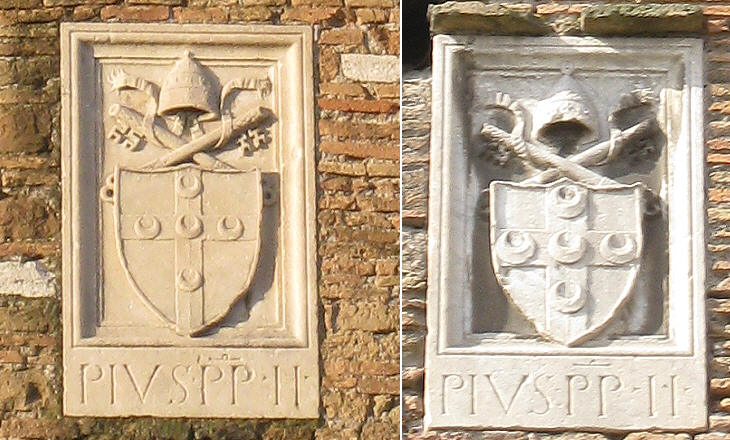 
The image used as background for this page shows a coat of arms of Pope Pius II.