Barbarano, Blera and Vetralla
(inscription on the fortress of Vejano celebrating its reconstruction by the Santacroce)

For a map of the area and a short introduction explaining this itinerary which runs along Via Clodia see page one. Etruscan works of art which were found in the environs of these three towns are on display in the museums of Viterbo. 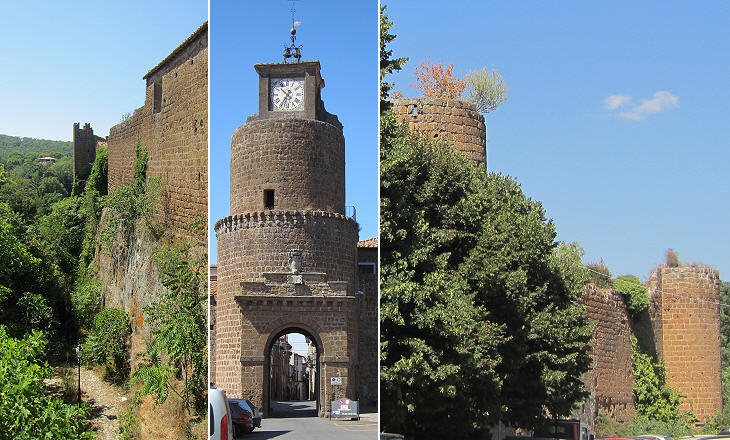 Views of the walls and Porta Romana, the main gate

The soft volcanic soil of northern Latium is cut by ravines made by small rivers. The origin of Barbarano goes back to the XIth century when the inhabitants of Marturanum, a Roman town along Via Clodia, relocated to a small terrace at the junction of two deep ravines which provided a natural defence. For this reason the walls of the town are very short, something which can be seen at other locations such as Vitorchiano. The walls had square towers, some of which were replaced by round towers in the late XVth century (the clock at the top of the main tower is a XIXth century addition). 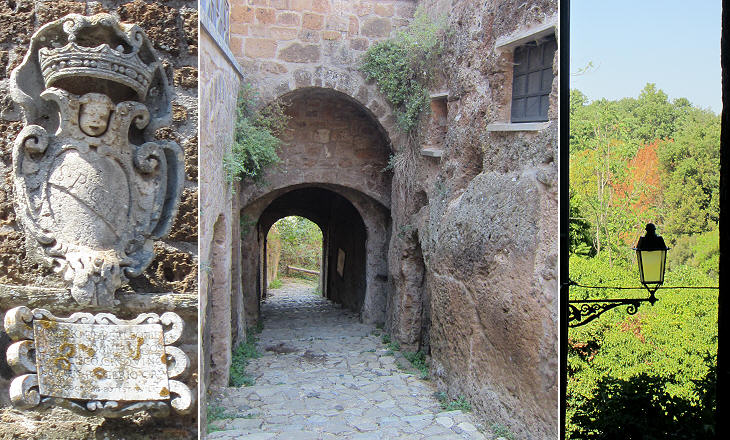 (left) Coat of arms of Barbarano (very similar to that of Rome); (centre) Porta del Canale; (right) view from one of the narrow alleys departing from the main road

Similar to other towns of the region, in the XIVth century Barbarano was a fiefdom of the Anguillara and later on of the Orsini, Dukes of Bracciano. The inscription below the coat of arms indicates that in the XVIth century it was a direct possession of the Papal State, because it lists four local magistrates.
The economy of Barbarano was partly based on the cultivation of hemp; the fields were located in the Biedano River gorge, the larger of the two ravines and they were accessed by a steep path which started from the northern gate of the town. 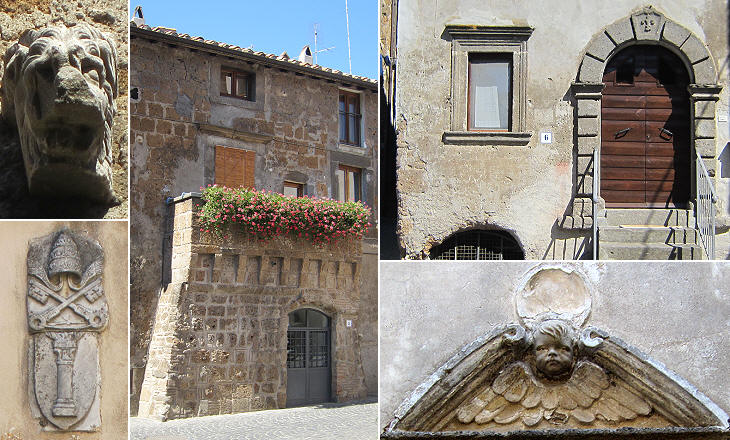 The inhabitants of many old towns of Latium, and in general of Italy, have left their homes because they were built on the steep slope of a hill and therefore were difficult to access by car. At Barbarano, owing to the flatness of the terrace where it stands, this did not happen and most of its buildings, which belong to different periods, have been restored with only minor changes. The main street of Barbarano ends with a terrace which offers a fine view over a gorge which reaches Blera, three miles to the west. Its walls show many caves, which in most cases were at least partially made by the Etruscans, who used them as tombs. 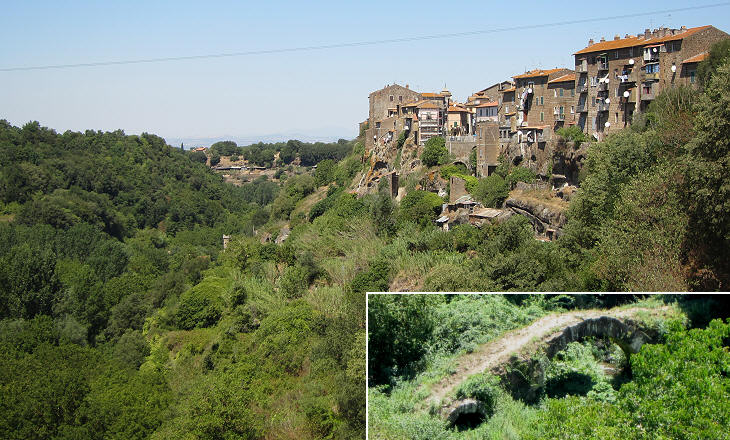 View of Blera from the modern bridge which crosses the ravine; (inset) Ponte del Diavolo, the ruins of a Roman bridge

The very ancient town of Blera was built on a ridge completely isolated by the Biedano River gorge and by a parallel ravine. The town was situated along Via Clodia which crossed the Biedano on a Roman stone bridge having three arches. Today a modern and very high bridge has put an end to the isolation of Blera and it offers a great view of the medieval town.
The approach to Blera was described in 1848 by George Dennis in The Cities and Cemeteries of Etruria, one of the first British accounts of the region:
We then turned off to the left, crossed some downs by a mere bridle-path, forded a stream in the wild, deep hollow, and reached the brow of a hill, whence the village of Bieda (the medieval name of Roman Blera until 1952) came into view, crowning an opposite height. The scenery here was very romantic. The height of Bieda was lofty and precipitous, and as usual was a tongue of rock at the junction of two glens, which separated it from the corresponding heights of equal abruptness. These glens, or ravines, were well clothed with wood, now rich with the tints of autumn. Wood also climbed the steep cliffs  struggled for a footing among the wild masses of tufo split from their brow, and crowned in triumph the surface of the platforms above. 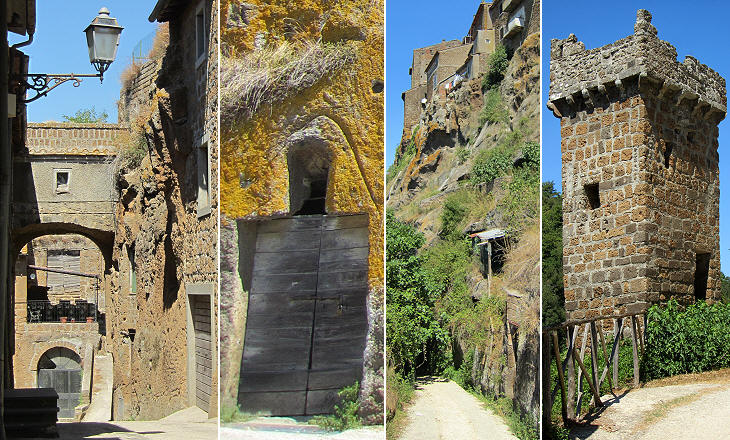 (left to right) Exit towards the Biedano River gorge; a rock-cut cave; road leading to the river; a medieval tower

The road to Bieda creeps beneath the cliffs of the ancient town, which are honey-combed with sepulchral caverns, broken and blackened with smoke. Here and there among them tall upright openings in the cliff show the mouths of ancient sewers, and at intervals are fragments of the ancient wall along the verge of the cliff. Dennis.
The walk from Blera to the river is a very interesting one; one can see the tombs cut by the Etruscans into the rock which were turned into stables (and houses) during the Middle Ages and today are used as cellars. At some locations Via Clodia was cut into the rock. Several Etruscan tombs have been found in the gorge, either at the top of the cliff or by the river. 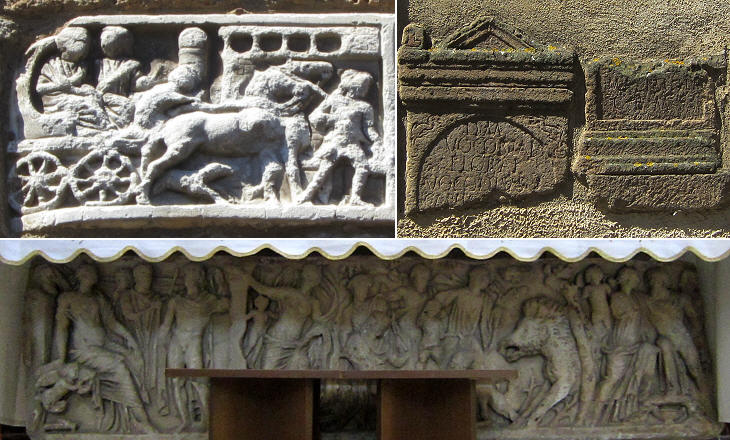 The main square and the streets of Blera are a sort of open air museum, with exhibits from all periods of its long history. The main church was built on a Roman temple and the altar of the church is a Roman sarcophagus portraying Meleager hunting the Calydonian boar, a most appropriate subject because Blera is very near Maremma, the marshy plain where the boar was actually hunted until very recently. It still lives in a natural reserve between Blera and Barbarano. The sarcophagus was moved to the church after 1875 because Augustus J. C. Hare in Days Near Rome which was published in that year wrote: As we came out of the church, three little children were sitting in the old Roman sarcophagus in the portico, pretending it was a boat. 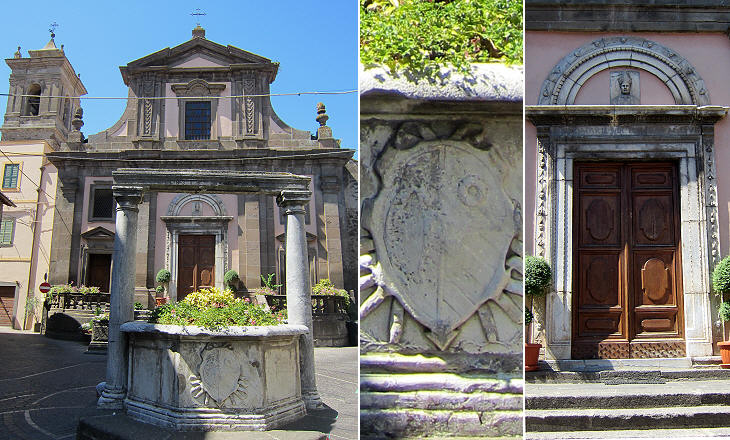 (left) S. Maria Assunta and a Renaissance well; (centre) coat of arms of Renzo di Ceri uniting those of the Anguillara (left) and of the Orsini (right); (right) portal, a detail of which can be seen in the image used as background for this page

The façade of S. Maria Assunta was modified in the XVIIIth century, but it retains a Renaissance portal which is decorated with a bust of Viventius, the first bishop of the town and its patron saint. Blera was a bishopric seat between the Vth and the XIth centuries.
The well is dated XVIth century: it must have been very deep to intercept the water-bearing stratum. It bears the coat of arms of Renzo di Ceri, an Italian condottiero (leader of mercenary troops) who in 1516 was rewarded for his services with the fiefdom of Blera by Pope Leo X. His father Giovanni was an Anguillara and his mother Giovanna was an Orsini. In 1527 he was in charge of the defence of Rome, but, although he fought valiantly at Porta Settimiana, he was unable to prevent the sack of the city. In 1572 Blera returned to the direct administration of the Papal State. Vetralla is located a few miles north of Blera and it is the most important town among those covered in this section, owing to its position along Via Cassia, the main road of the region. It was built on a low ridge, so it was protected by a complete set of walls and by a small fortress located on its highest point: the walls in some areas were pulled down to allow easier access to the old town whereas the fortress was bombed in 1944. 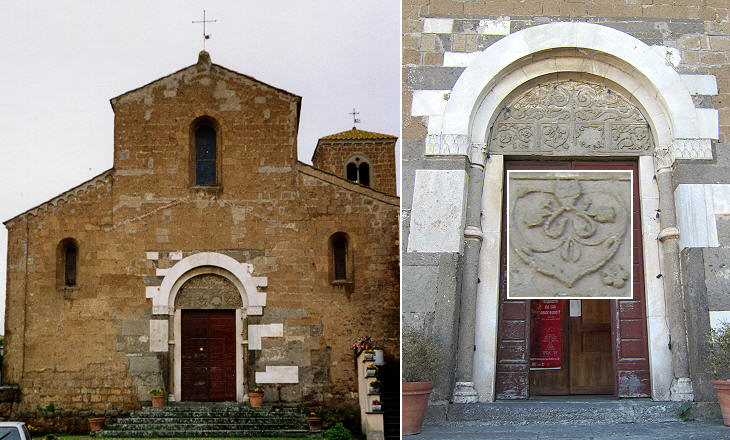 A very old church near the northern end of the town was rebuilt in the XIIth century after it had been damaged in 1187, during a war between Viterbo and Vetralla which ended with the plundering of the latter. The church was acquired by the Franciscans in the XVth century and it constitutes the most interesting medieval monument of the town because most of the additions of the following centuries have been removed. 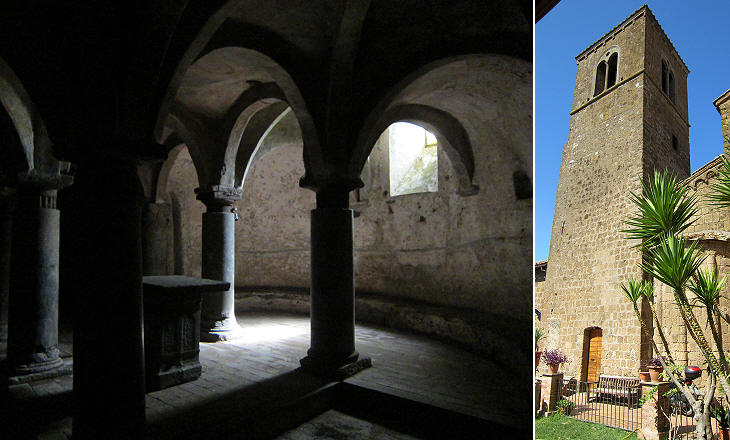 The vast crypt was most likely the original church. It has three apses and it is not entirely aligned with the orientation of the church above. It was built making use of ancient columns, but not of ancient capitals. Large crypts can be found at other churches in the region such as those of Sutri and Acquapendente. 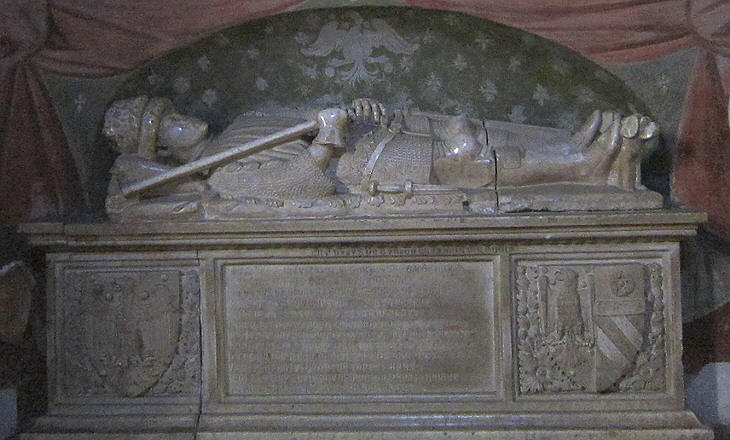 Vetralla is located on the western offshoots of Mount Cimino. In the XIVth century it was a possession of the Prefetti di Vico, a family of German origin with many fiefdoms in northern Latium. Notwithstanding the return of the popes from Avignon, the di Vico retained their power until Cardinal Giovanni Maria Vitelleschi on behalf of Pope Eugenius IV restored order in the region. Giacomo, the last of the di Vico was beheaded at Soriano in 1435 after having been defeated at Vetralla.
S. Francesco houses a fine monument to a member of the di Vico family whose mother was an Orsini. Briobris di Vico died at the age of 33 in 1353, but his monument, a gisant, was built in the early XVth century; the dead man was portrayed with his dogs at his feet and wearing a high felt hat. The sarcophagus was placed in a (lost) Gothic canopy, the marble columns of which were utilized to decorate some side altars. 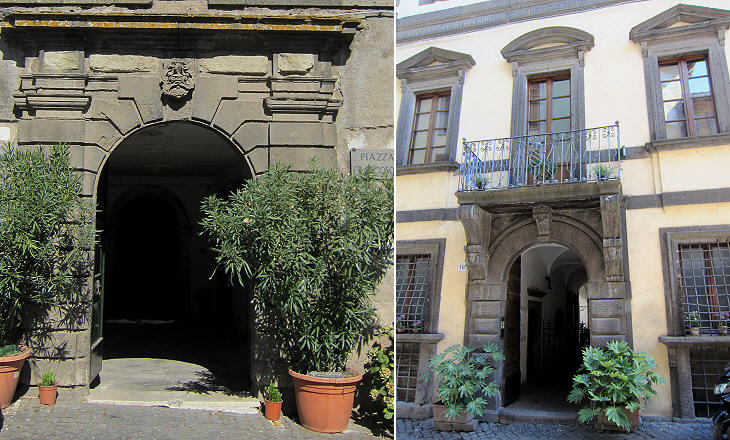 In 1512 Vetralla was donated to King Henry VIII by Pope Julius II because England joined an alliance (League of Cambrai) promoted by the Pope. Apart from a plaque with the coats of arms of the Pope, the king and Cardinal Cristopher Bainbridge there is no other evidence of the English possession of the town.
In the middle of the XVIth century Vetralla was for a short time a possession of the Farnese, the family of Pope Paul III, but they did not manage to include it in their Duchy of Castro. Vetralla therefore does not have palaces of the feudal masters of the town, but instead those of some local wealthy families who built them in the late XVIth century. 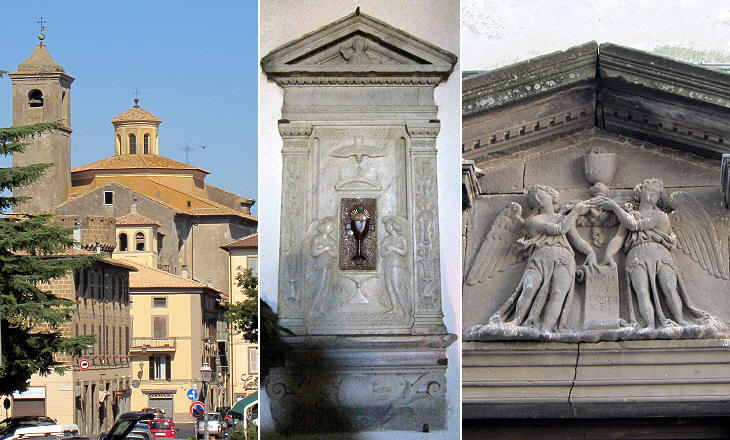 In addition to S. Francesco, Vetralla has several other historical churches and this notwithstanding the fact that it was not a bishopric seat. In the early XVIIIth century the church dedicated to Andrew, the patron saint of the town, was rebuilt and greatly enlarged. It was designed by Giovanni Battista Contini, a leading Roman architect. In 1783 Pope Pius VI gave Vetralla the status of "Città" which meant it had its own administration.